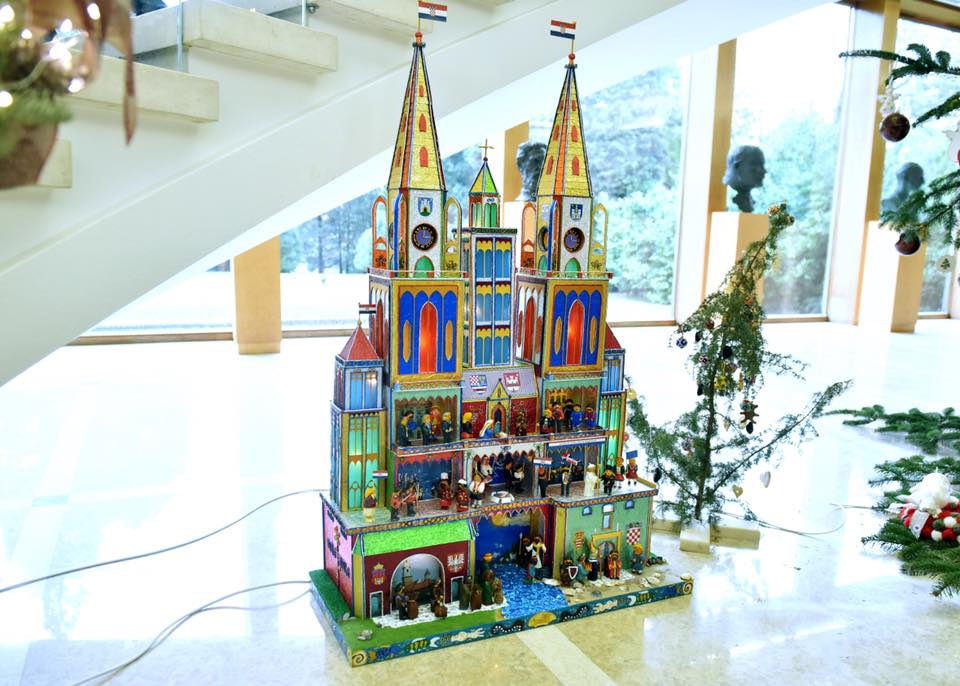 The Honorary Consul of the Republic of Croatia in Krakow, Poland, Mr. Paweł Włodarczyk, has presented Croatian president Kolinda Grabar-Kitarovic with a Croatian-Krakow nativity scene, as a gift which shows in 9 scenes of the history of Croatia.

The nativity scene, presented during the Open Day in the Office of the President of the Republic of Croatia, is also a testimony to the Polish-Croatian long-term relationship.

However, due to its irregular nature, it did participate in the competition but the Krakow public had the chance to see it exhibited.

The nativity scene was also exhibited at the traditional Christmas party of Croats, Croatian sympathizers and the South Poland consular corps, which was organized on 8 December by the Croatian consulate in Krakow.

In the history of Krakow nativity scenes (called szopka in Polish), this is the first one that’s related to history and architecture of another country which shows in 9 scenes the history of Croatia. This nativity scene is also a testimony to the Polish-Croatian long-term bond.

The Croatian-Krakow Nativity Scene is built on three levels. What dominates above them are the towers of churches from Croatian cities, characteristic of the Krakow nativity scenes. 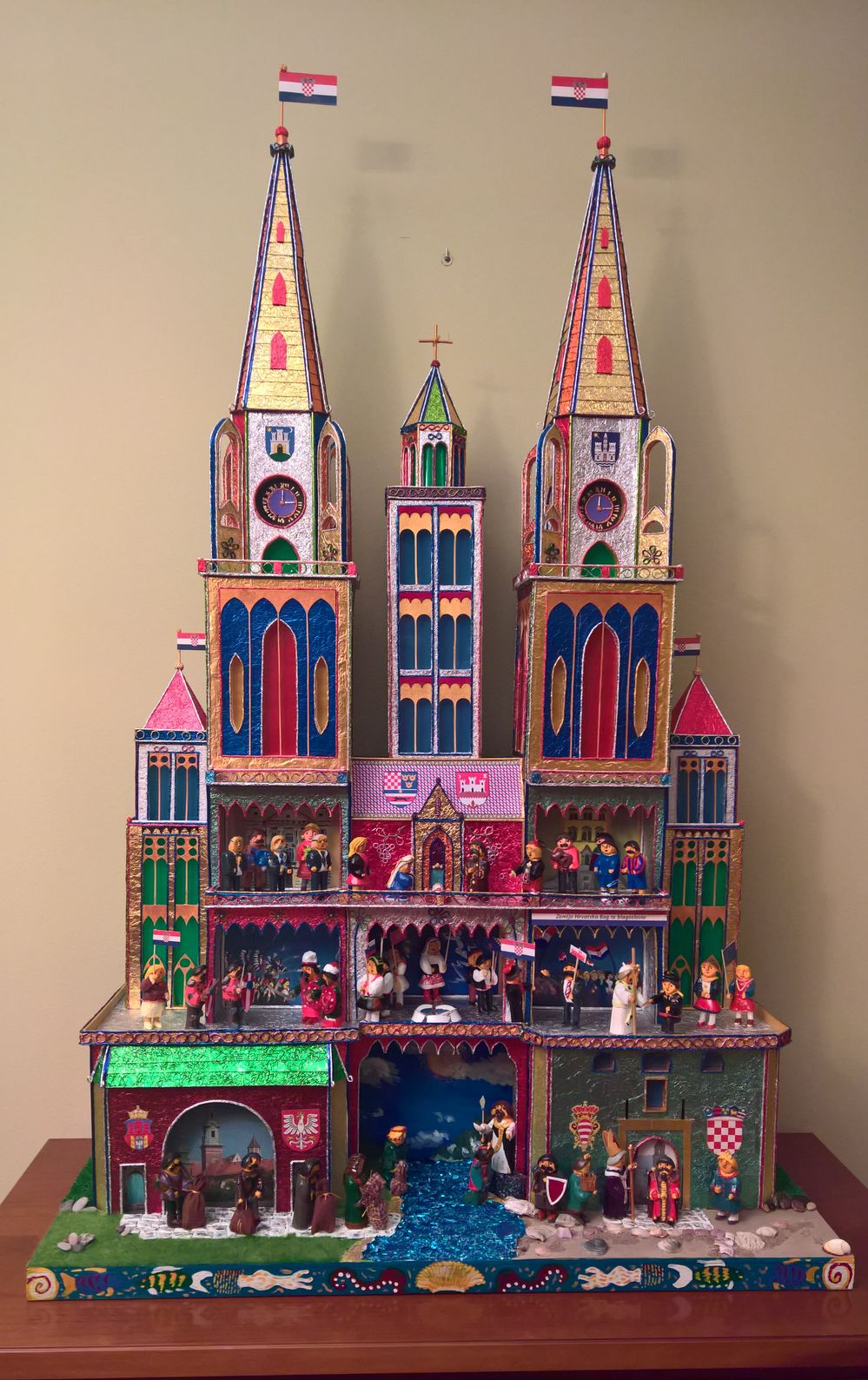 The first level shows a scene referring to the time when Croatian tribes stayed in southern Poland in the 4th–7th centuries, in the area of Krakow, by historians called White Croatia, and to the beginning of their migration to the south of Europe, to the territories of present-day Croatia.

The blue ribbon between the mainlands is a symbol of crossing the Danube and of the territories of the Adriatic Sea. On this level, two years were depicted: the year 800 – the year of the baptism of Croatia (the shell is a symbol of a baptismal font) – and the year 925 – the coronation of the first king, Tomislav.

The second level (the scene on the left) shows centuries-old fights of Croatian society defending their land from the raids of the Turks. Further, we can see (the scene in the middle) the history closer to our times – the breakup of Yugoslavia into 7 independent countries. The Croats, leaving the federation of Yugoslavia (the scene on the right) in their regional clothes, are being welcomed by Lech Wałęsa, the leader of Polish “Solidarity”, who with his hand raised and fingers in the shape of the letter V (Victoria) encourages them to march towards the free world and an independent Croatian country.

At the side of this scene, we can see John Paul II, the Polish Pope, with a Croatian hero, general Ante Gotovina, who is kneeling and kissing the papal ring. In a symbolic way, the Pope directs to him the famous words pronounced during the 2nd papal visit to Croatia, in 1998: “Zemljo Hrvatska, Bog te blagoslovio”, heartening all the Croats fighting for the independence of their motherland. Behind them, there is the EU flag and representatives of other free European countries are inviting the Croats.

The third level shows the classic theme of a Christmas nativity scene, depicting (the middle scene) the newborn Jesus in a manger and Mary, Mother of God, and St. Joseph. In the scene on the left, the former presidents of the Croatian independent country and the current President of the Republic of Croatia Kolinda Grabar-Kitarović, are marching to the manger to thank the newborn God for the gift of independent Croatia and to ask Him for prosperity for their country and nation.

Behind them, Croatian farmers and fishermen are marching to the manger with the fruits of fields and sea (symbolized by the bunch of grapes and a fish) to thank Jesus for the abundance of natural resources in their country.

On the right side, the Croatian nation is marching, led by a representative of the Croatian church, Cardinal Josip Bozanić. He’s carrying a painting of a Croatian communist authorities’ martyr, Cardinal Alojzije Stepinac, blessed by Pope John Paul II; cardinal Bozanić is asking for Stepinac’s canonization. Behind him, there is the youth, the future of Croatia, and sportsmen, making the name of Croatia famous around the world.

The symbolic scene shows the reconciliation between the supporters and footballers of Dinamo Zagreb and Hajduk Split, who are carrying a ball as a gift for the newborn Child of God. (This scene refers to the famous reconciliation between Krakow supporters of oldest football clubs in Poland, Cracovia and Wisła, during a mass organized on the Cracovia stadium as a tribute to John Paul II a few days after his death. When St. John Paul II was a student, he was a Cracovia player, a goalkeeper!). Behind them, there are Croatian artists and academics; they are bringing knowledge and instruments to Carol for Baby Jesus with the rich Croatian culture of words and notes.

All this is happening beneath the roofs and towers of Croatian churches. The tower from the church in Trogir is easily recognizable, as well as the famous tower (in the middle) of the church in Diocletian’s Palace in Split, and the two characteristic towers, well-known in Croatia – the towers of the cathedral in Zagreb; the manger with Baby Jesus, His mother and St. Joseph, is protected by the roof of St. Mark’s Church in Zagreb.

The Honorary Consul of the Republic of Croatia in Krakow, Poland, Mr. Paweł Włodarczyk, with Croatian president Kolinda Grabar-Kitarovic

The nativity scene was made by Stanisław Malik, who comes from the famous family of Krakow nativity scenes makers. Malik’s nativity scenes are among museum collections all over the world, in museums of Krakow Warsaw, and Toruń, in the Museum of Eastern European Folk Art in Marseille, in private collections (in Chicago, Cologne, Munich, Brussels, Rome, Sevilla, Milan).