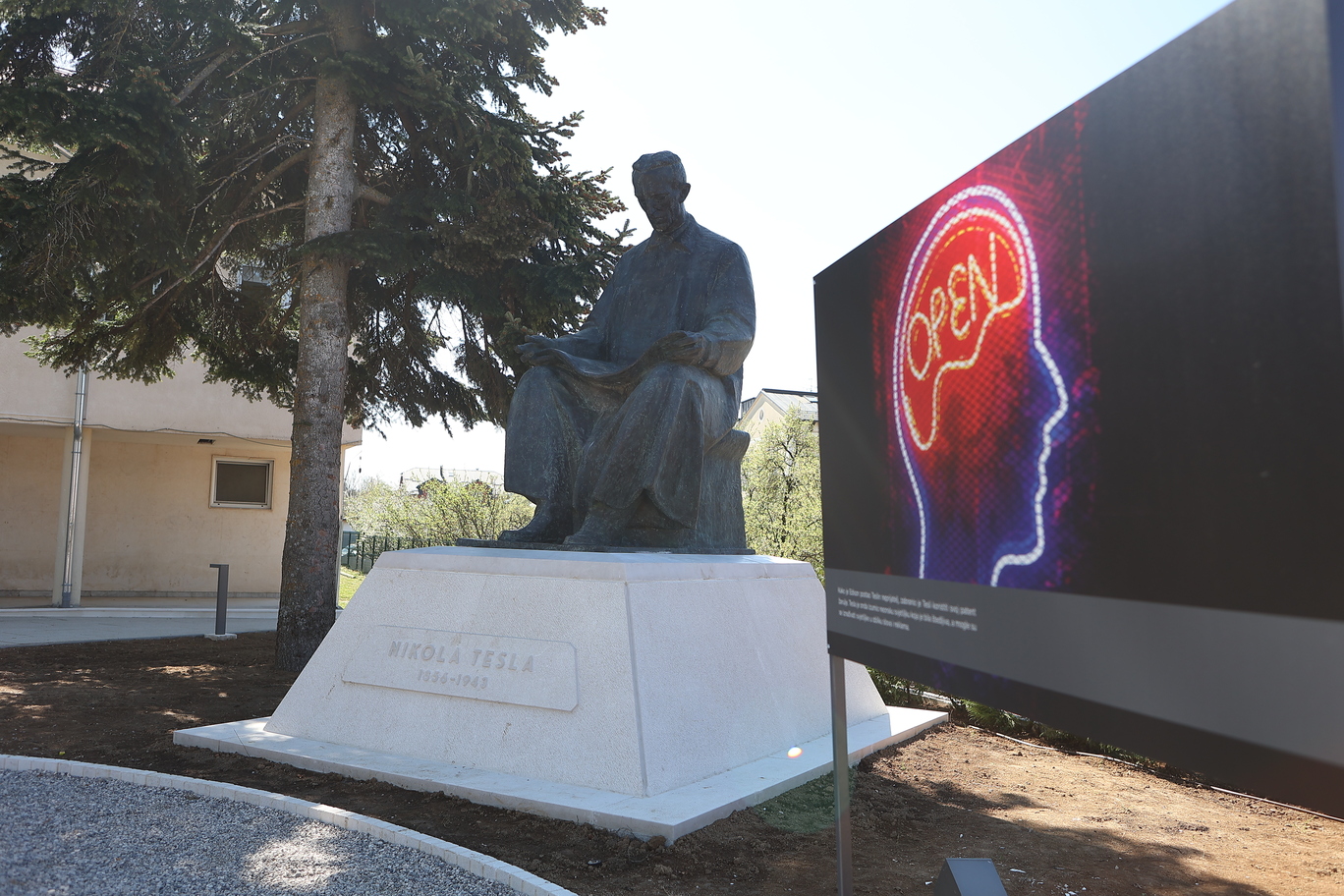 The official ceremony for the return of the monument of Nikola Tesla was held in Gospić along with the presentation of the new Nikola Tesla Square.

The long-awaited ceremony of the return of the Nikola Tesla monument to Gospić was held today in front of the Cultural-Information Centre in Gospić.

The one-hour ceremony, prepared by the renowned Croatian theatre director Krešimir Dolenčić, presented sketches from Tesla’s life, his most important inventions, while the programme included many prominent people who spoke about Tesla. 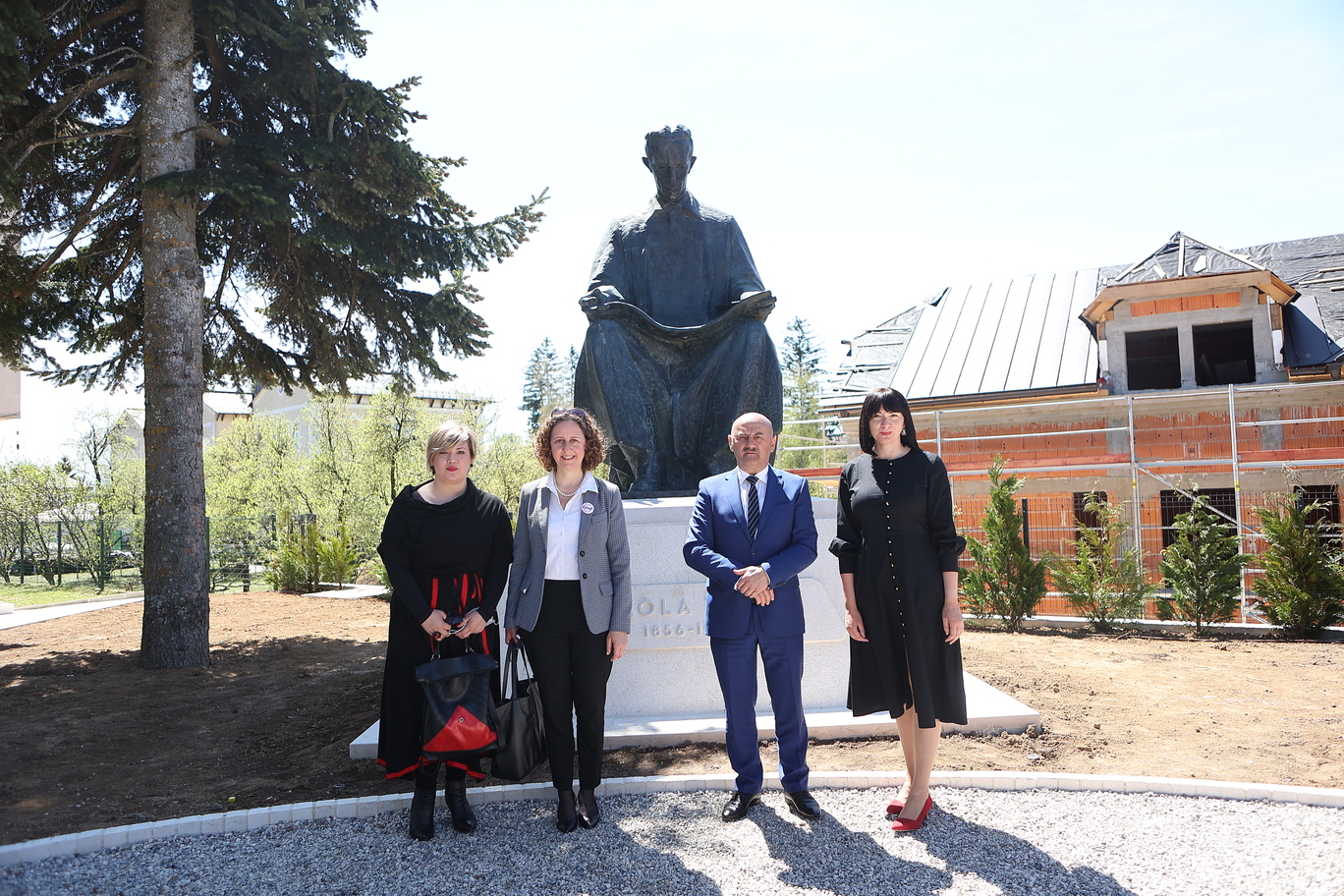 Actor Sven Jakir in the character of Nikola Tesla, with the help of director Mario Kovač, brought clips from Tesla’s life from the play “Radio Tesla” and the guests were introduced to playing the instrument Theremin. 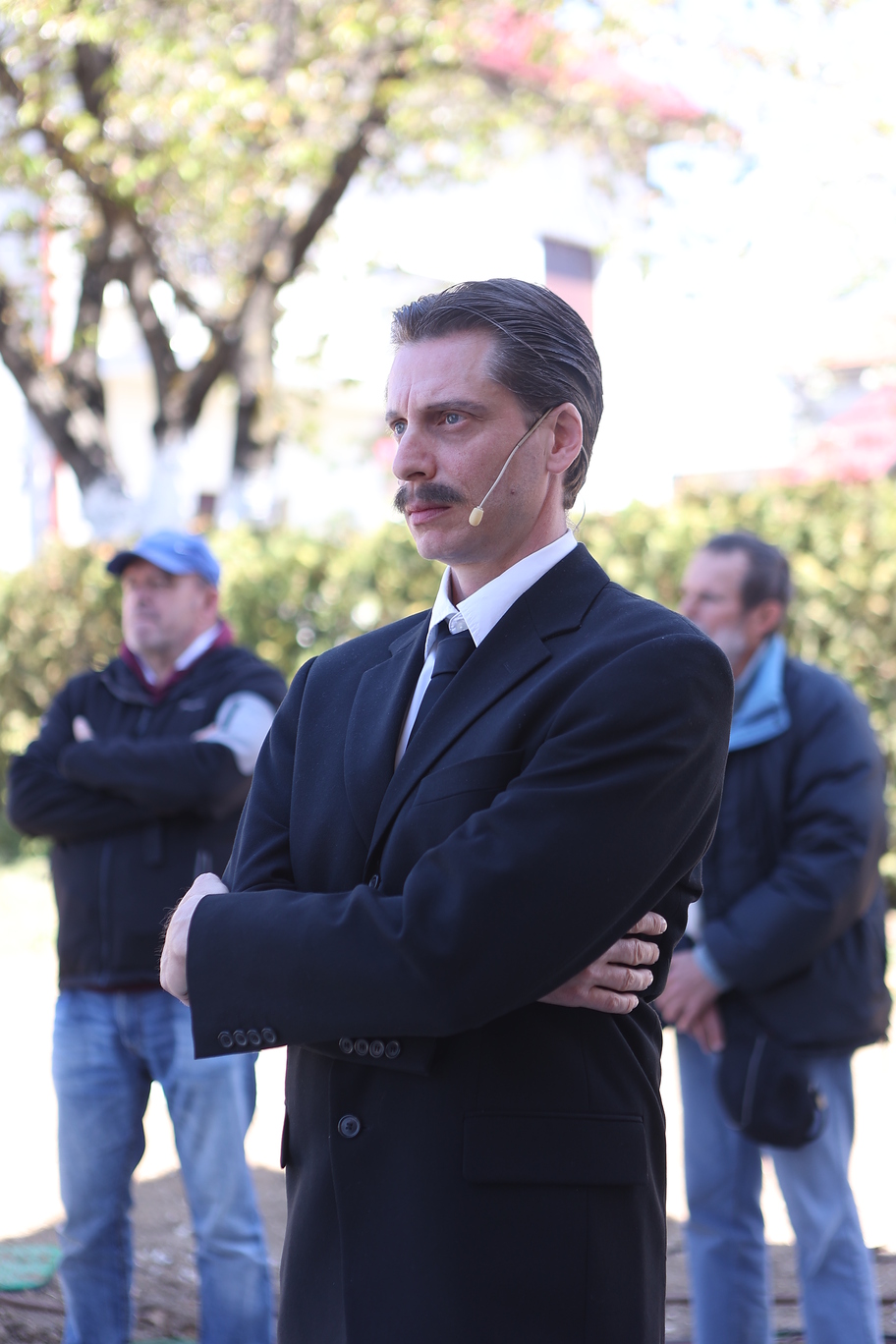 It was a big event for Gospić that has been waiting for almost thirty years and which has aroused great interest of the public and the media. Tesla was educated in Gospić, gained his first knowledge and experience there, and returned to this area throughout his life in his thoughts and numerous written texts.

The event was attended by many distinguished guests, including the Minister of Culture and Media of the Republic of Croatia Nina Obuljen Koržinek, State Secretary of the Ministry of Culture and Media Krešimir Partl, Director of the Directorate for Cultural Heritage Davor Trupković, Bishop of Gospić-Senj Diocese Msgr. Zdenko Križić, Timotej Kritovac, author of the project and Petar Melvan, on behalf of contractor Kameni zid. The event was also attended by Maro Grbić, grandson of Fran Kršinić, the author of the monument. “In a hundred years, a man is born who transcends the time in which he creates, who leaves a significant mark on his epochal deeds and who has changed the world. Nikola Tesla is a man of the millennium and without his contributions we would not have the world as we know it. We, the people of Gospić, are extremely proud that Tesla was one of us and that he belongs to us. Today, even 78 years after his death, numerous Tesla patents and innovations encourage the scientific world to new achievements. I am proud that this project of building a square for the greatest scientist in history was completed during my tenure, and I especially thank the Minister of Culture and Media. I want to emphasise that we are continuing and plan to implement the project of expanding the Nikola Tesla Memorial Centre through the establishment of the Nikola Tesla Campus, which will promote its name in the function of science development. Thank you to everyone who shares with us the joy of the return of the monument to Gospić and the joy of building a new Tesla Square,”said the Mayor of Gospić Karlo Starčević. 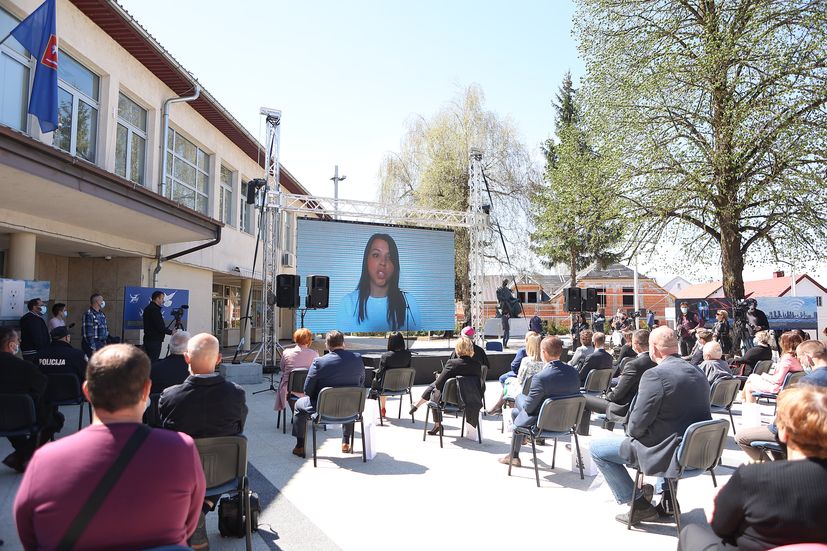 “It is a great pleasure for me to address on this extremely solemn occasion the return of the monument to the greatest Croatian scientist and cosmopolitan, where he symbolically returns to the place of his childhood. We remembered his childhood, schooling and the memories we had read about of how one could set off from such a small place on such a long and great journey. The return of this monument makes us especially proud because we are witnessing the victory of culture and we will always oppose any demolition and advocate for reconstruction. Tesla instructed us to do so, because he built the future and turned night into day. His inventions changed the world we live in and scientists are still inspired by his ideas today. His patents and inventions will be forever remembered in the anthology of science and therefore the least we could do in cooperation with the city is to help return this monument to Gospić. I am proud and happy with all the people of Gospić that we are witnessing this solemn moment and let this monument be a reminder to young people that they should believe in their dreams and work for the common good,” said Minister of Culture and Media Nina Obuljen Koržinek. 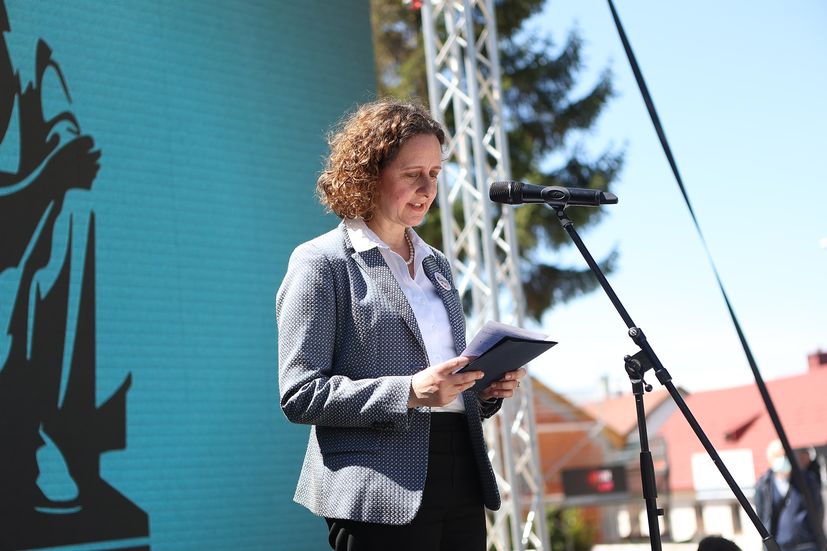 The monument to Nikola Tesla, the work of Fran Kršinić from 1956, is located in front of the building of the Faculty of Electrical Engineering in Belgrade, and the same monument is located on the Niagara Falls in the United States. Unfortunately, one of the three identical Kršinić monuments, in Gospić, was damaged during the Homeland War.

In 2006, the City of Gospić had this casting made, and in 2014, the City Council of the City of Gospić made a decision to erect a Tesla monument in front of the Cultural Information Centre. In cooperation with the Ministry of Culture and Media of the Republic of Croatia, the City of Gospić worked intensively in 2020 and 2021 on the return of the monument to Tesla’s homeland. Architect Timotej Kritovac, inspired by Tesla’s self-denying personality, designed the concept of the square, on which the monument to Nikola Tesla was finally erected on April 4. 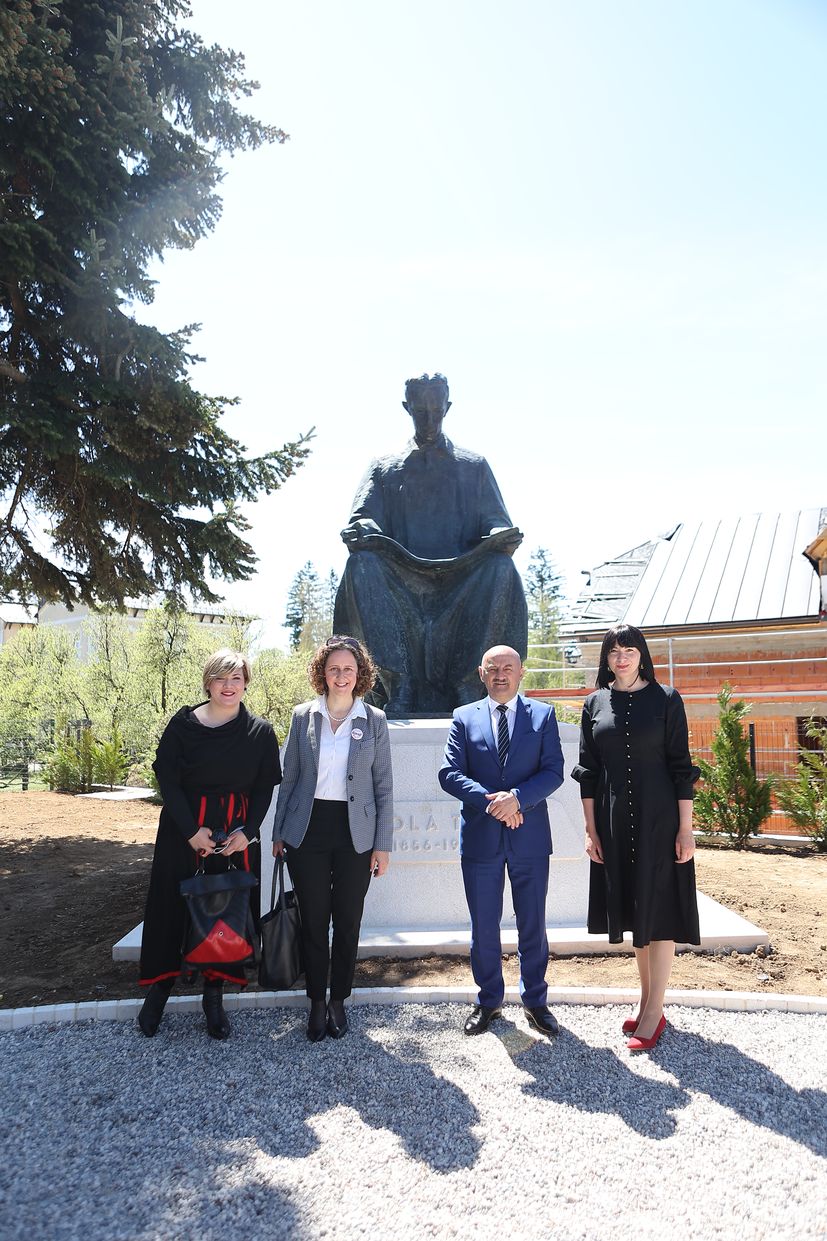 At the end of the event, a dove was symbolically released from the new square as a reminder of Tesla’s connection with these animals, especially during his life in America. Dove released into the air