Home » News » VIDEO: Huge fin whale gets up close to a boat in Velebit Channel 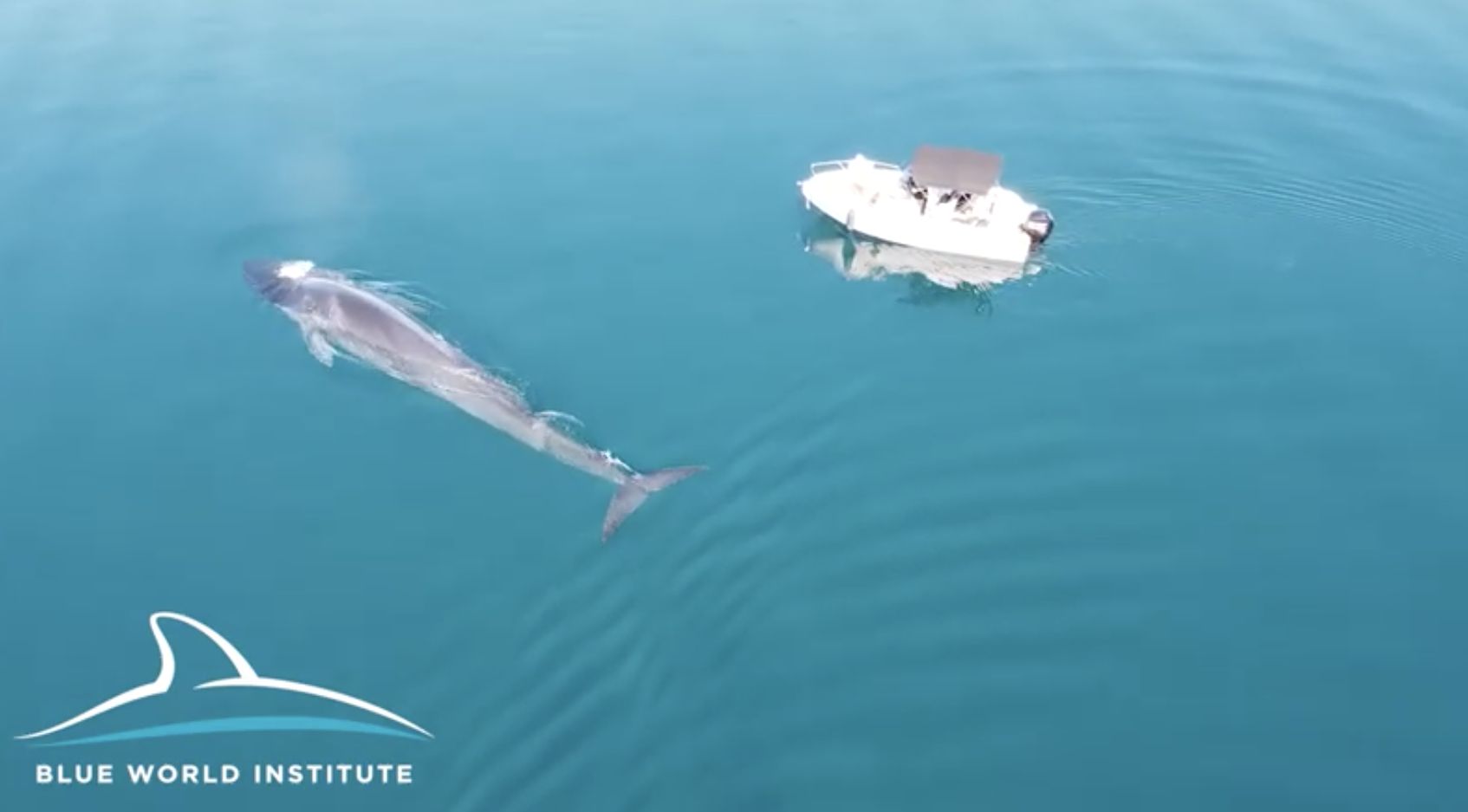 7 September 2020 – Researchers have filmed another large fin whale in the Velebit Channel with a drone.

In a successful search for a fin whale in the Velebit Channel last month, researchers from the Croatian Museum of Natural History and the Blue World Institute photographed an adult in front of Starigrad-Paklenica.

Since reports of fin whale observations in the southern part of the Velebit Channel (Ražanac, Vinjerac, Novsko ždrilo) continued in September, the researchers went out again to film a large fin whale from the air with a drone to analyse the size and health condition, to take a skin biopsy for DNA analysis and to take additional photographs for identification.

The fin whale was found on Saturday, September 5, at the very entrance to Novsko ždrilo. The whale was followed for about two hours in the gorge itself when he swam to the new Maslenica bridge and returned to the Velebit Channel. After exiting the gorge, the whale swam in the direction of Vinjerac, and since its dives lasted up to 38 minutes, the researchers gave up on further monitoring and recording.

However, by reviewing the photos taken, they determined that it was not the same animal that was in the area in mid-August, but a different whale.

“After I made the first series of photos, I went to check their quality and I noticed at first glance that the fins of the previously photographed and this whale are different. Namely, the whale that was photographed by colleagues in August had a large and visible notch in the fin itself, while this whale has no notch. Also, the shape of the fins differs,” says researcher Jure Miočić-Stošić.

“Almost unbelievable, but only half an hour after this discovery, we received a phone call from citizens who spotted another whale in the Vir Sea. So, these photos confirmed the facts we obtained by collecting observations of citizens that at least two fin whales live in the northern Adriatic.”

During the morning of September 6, researchers went out to sea again and found the same large fin whale a little further north than the Novski gorge itself.

“Apart from the fact that his dives lasted shorter, this time the big fin whale was interested in our vessel. On several occasions, he swam along our ship for only 4-5 meters below the surface. During one approach, he turned on his side and his almost white belly was clearly visible,” says Grgur Pleslić, director of the scientific program of the Blue World Institute.

“We saw a large number of parasitic crustaceans of Penella sp. On the body of the whale, but we estimate that the infestation was not so great that it would be a health problem for the animal,” Pleslić continued.

Doc. dr. sc. Draško Holcer, the senior curator of the Croatian Museum of Natural History, performed a biopsy of the skin of a fin whale.

“On several occasions, the whale swam very slowly alongside our vessel. Such a situation is advantageous for taking a biopsy because it allows you to hit the animal accurately without risking possible injury or failure. During one such ascent, I managed to shoot a biopsy arrow with a crossbow and take a small piece of skin for DNA analysis,” says Dr. Holcer adding, ” As far as I know, this is the first successful biopsy of a large fin whale in the Adriatic. But about ten years ago, I managed to take a biopsy from a humpback whale that lived in the Piran Bay. Then she helped us determine the sex of the animal. We will immediately send this sample to colleagues in the Netherlands who are currently doing population genetic research on large whales in the Mediterranean and the Atlantic, and I hope that the results will reach us as soon as possible. “

This successfully concluded almost three weeks of monitoring the stay of fin whales in the Velebit Channel and researchers hope that the data collected will help determine from which part of the Mediterranean the great whales come to the Adriatic.”

“Since we know how fin whales regularly live in the Adriatic and use the open area of the southern Adriatic and the Jabuka valley, in the long run, our main goal is to determine the importance of the Adriatic for the Mediterranean population of fin whales. To be able to do this we need a large number of observations throughout the year. By combining observation data with data on sea temperature, chlorophyll content, ie organic production, sea currents, depth, etc., it is possible to develop models that can help identify important areas for whales and predict the occurrence of animals throughout the year. In this way, we want to contribute to their better understanding and protection and preservation,” Dr. Holcer said.

The fin whale in the Mediterranean is an endangered animal species. Their numbers are dwindling, and the main threats today are collisions with large vessels causing serious injuries, amputations of body parts and death, and entanglement in illegal floating nets, a kind of death wall, which despite the ban is still placed in some parts of the Mediterranean. Big whales, therefore, need our help today more than ever.