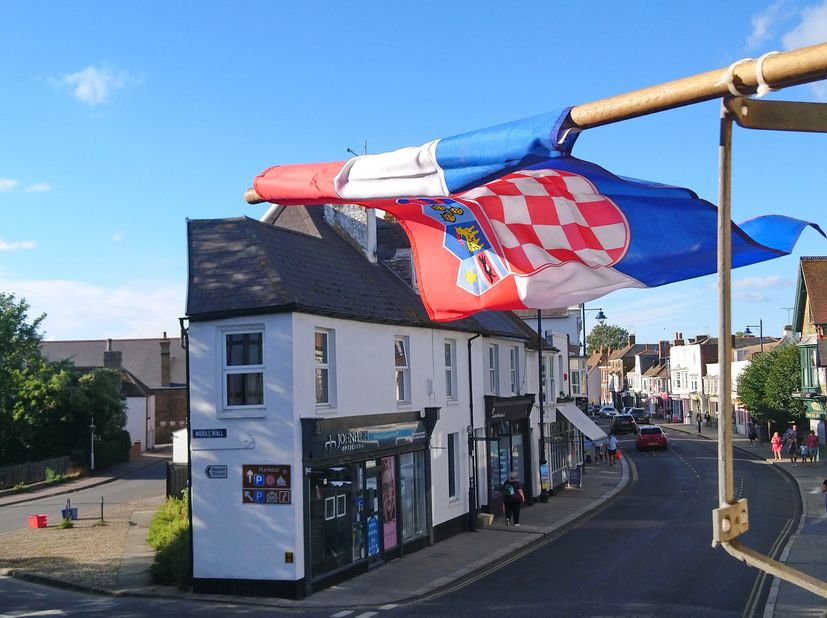 The Croatian flag hangs outside the half-Croatian café-bar

One thing expats always love when they are far from Croatia is a taste of home. And the same rings true for tourists who fall in love with certain products on holiday.

Some of those fixes can be satisfied in the UK at Amedea, the half-Croatian café-bar just outside of London in the seaside town of Whitstable. 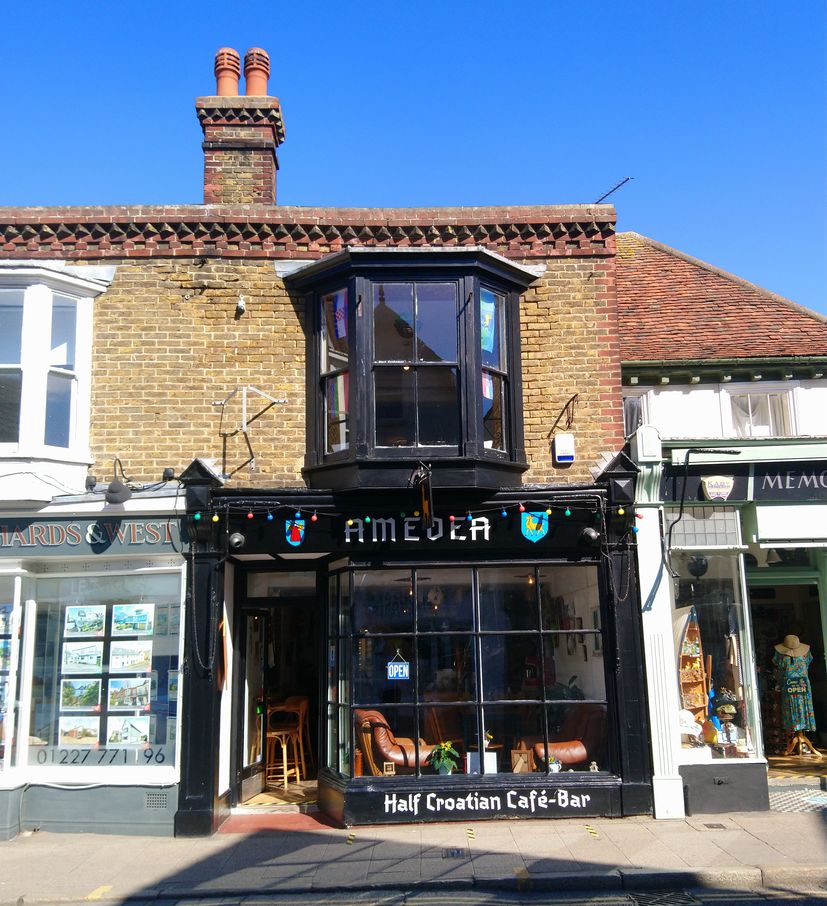 Amedea is owned and operated by 28-year-old Ed Thomas, whose Croatian roots he inherited on his mother’s side of the family. Born in Whitstable, Ed was a frequent visitor to Croatia growing up.

“I grew up with the craziest, most fun mama, Suzi, who is of course, Croatian. My sister Saskia and I really could not imagine having an English mum after our upbringing. Whether it was her incredible cooking, the music she would play, or learning from her loving hospitality, our mum really did do things in a typical, fantastic, Croatian way,” Ed starts off telling us.

Ed says that growing up he always enjoyed his mum’s ‘lost in translation’ phrases.

“For example, the whisky, ‘Famous Grouse’, to our mum, would be called ‘The Farmhouse Goose’. Sask and I had a really fun upbringing and yes, I think we were well connected to our Croatian heritage growing up.My mum’s sister, our aunty Tammy lives in the UK too with our uncle Jim in London. So when we get together with those guys and the sisters are in full flow conversation, it does feel like we’re in Croatia again.” 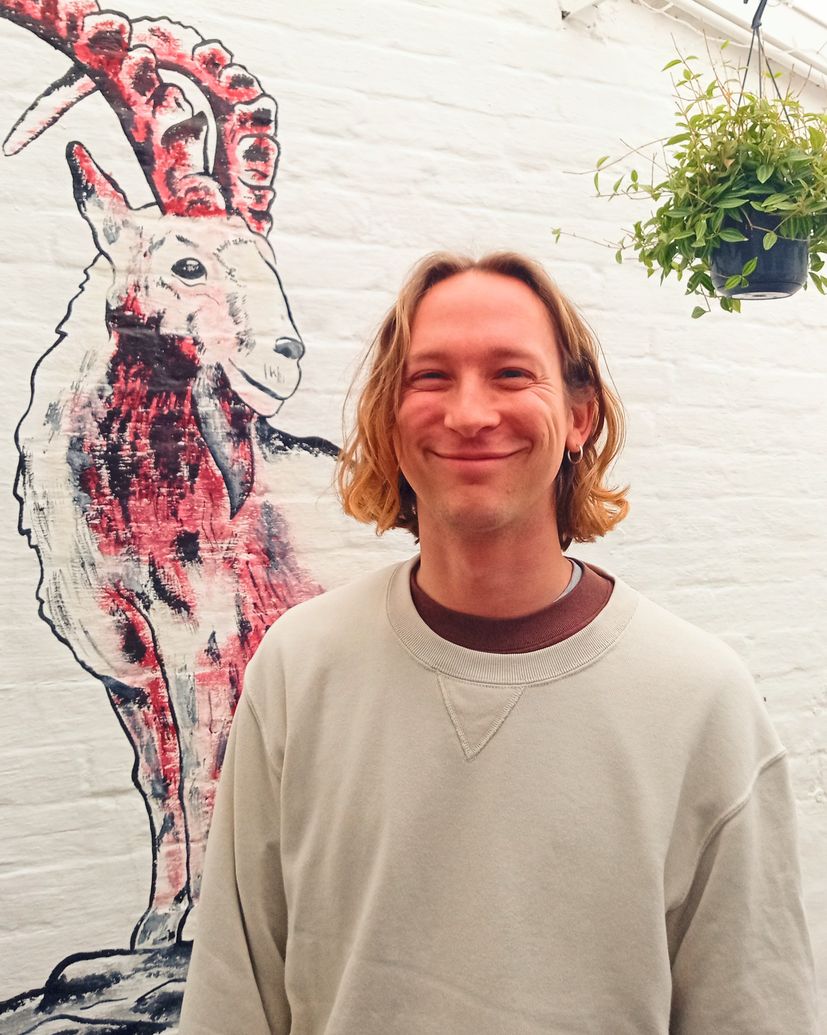 Ed’s mum met his dad, Andy, almost 30 years ago whilst he was a holiday rep in what was then Yugoslavia and it was Andy who was a big influence on Ed opening Amedea back in the summer of 2019.

“He’s never taken himself too seriously and always passes his good mood onto others. For his whole life, he’s run ridiculous, customer facing businesses with a smile on his face, never seeming to worry too much. And he’s always content. Even though he’s never worked directly in a bar or restaurant, his attitude to customers has made him a really important role model to me. Especially when I’m running out of a flavour of crisp and I think the world is going to end, he’s a great reminder to evaluate what it is I’m actually panicking about, calm down and realise, it probably doesn’t matter. I’m still learning, but I’m trying to acquire this attitude more each day,” he explains.

Whilst his dad might have had an influence on getting him in the hospitality trade, the inspiration for the name of the café-bar came from his Croatian grandma.

“Amedea is the name of my nona. She lives in Kanfanar which is about 20 minutes from Rovinj. Throughout her life she’s been a head mistress, a teacher of national dance, she’s looked after an olive farm and she is also a brilliant painter,” Ed reveals, before adding. 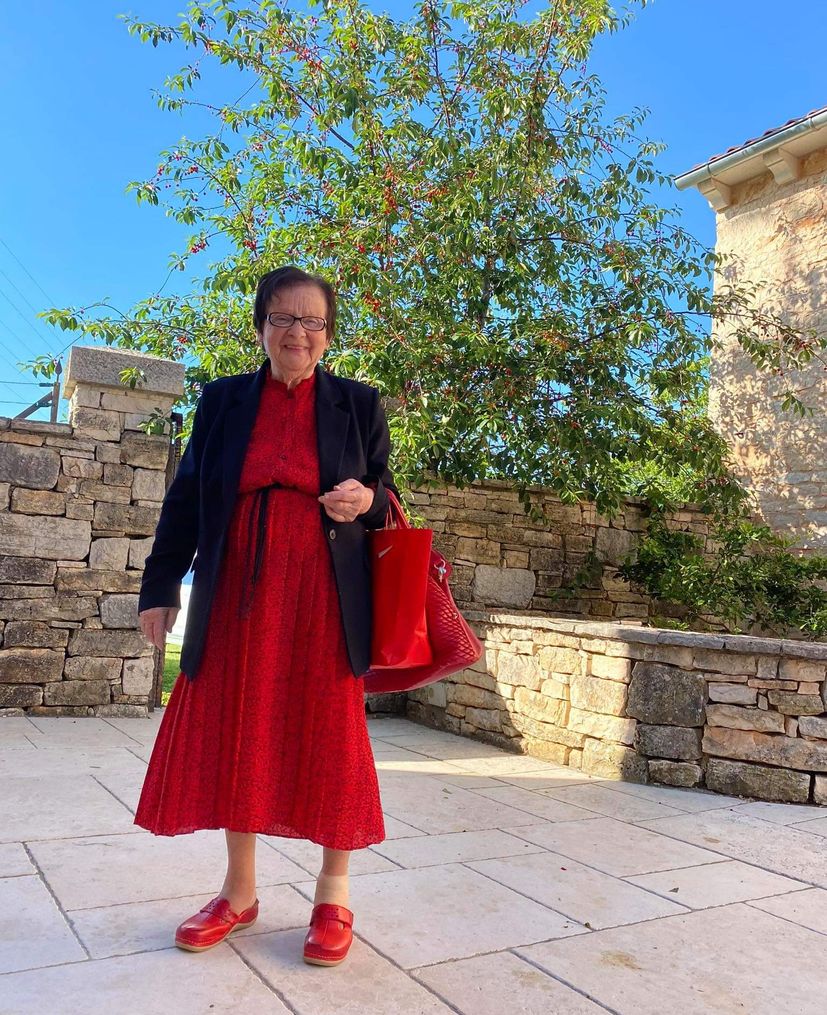 “Amedea really is an amazing woman, she is a big influence on myself and the bar too. Her hospitality is 10 out of 10 and I’ve never been hungry at her house in my life. Using olive oil from the local olive farm, she makes the best roast potatoes I’ve ever tasted! We have loads of pictures of Amedea in the bar, along with her paintings and some Istrian dancing clothes and instruments, which can be seen when we reopen.”

Apart from the seeing the Istrian dancing clothes and instruments, Amedea offers a range of Croatian products.

“We’re constantly rotating our Croatian wines which include Graševina, Plavac, Postup, Babić and always Malvazija as a salute to Istria. We’ve got loads of spirits including Pelinkovac, Croatian gin and Šlivovica – but beer has been a lot harder to get my hands on. We’ve had cans and bottles, but I’m still trying to get Croatian beer on draught, which is harder than it sounds. In terms of Croatian food, we currently sell Paški sir (sheep’s cheese) and pršut (cured meat) on our food boards, and excitingly, we have just got my mum’s kitchen registered for cooking/baking too so watch this space,” Ed says, before adding. 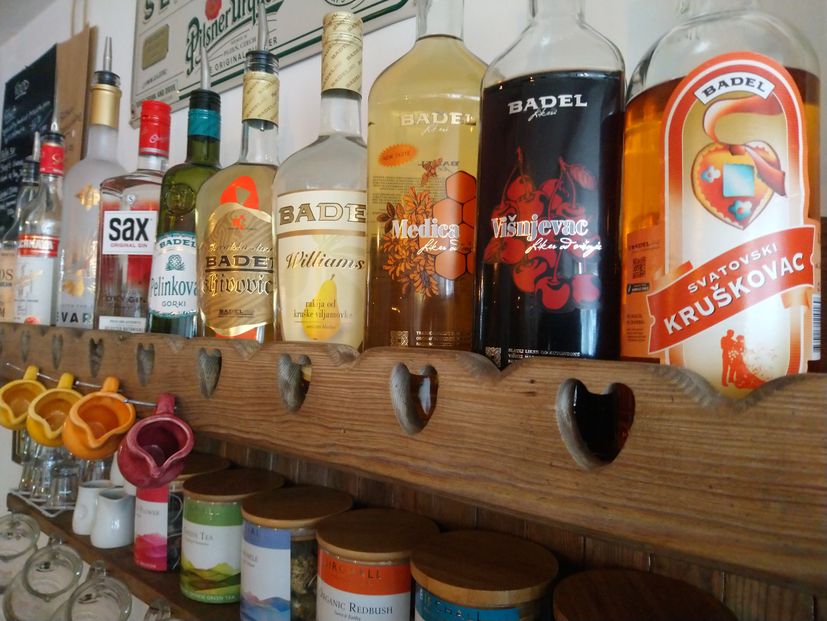 Croatian spirits at the bar

“I’m excited to say that when we reopen, for the first time we’ll be stocking San Servolo pivo which was the first Istrian craft beer. I’m also really trying to get some Garden Brewery products in here too which I know will go down well with locals and Croatians – I’m hoping it’s only a matter of time until our customers can taste them.” 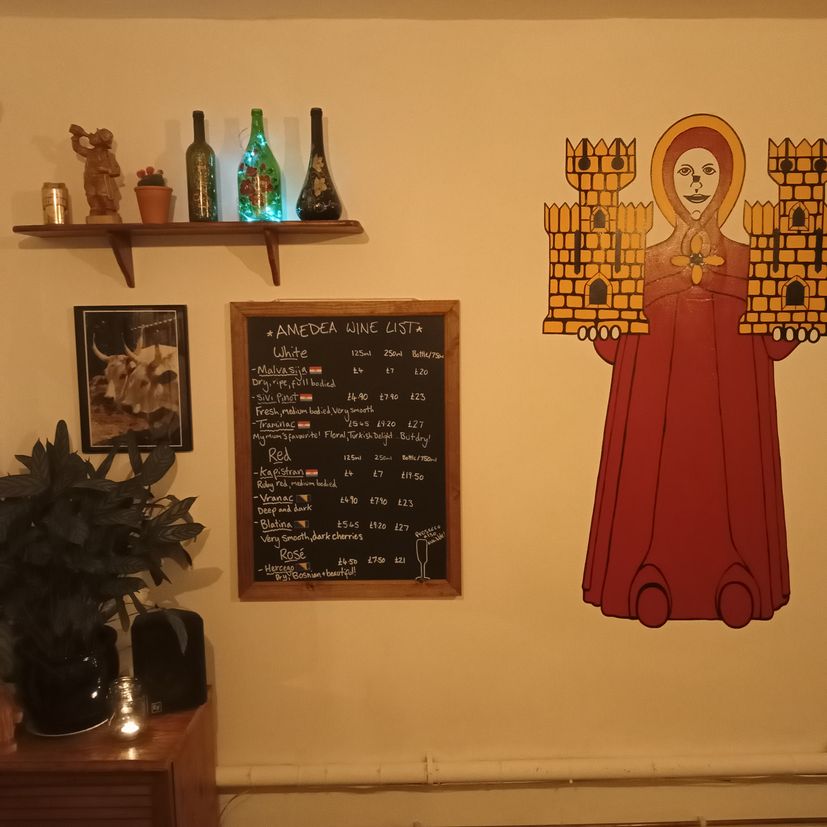 Inside Amedea and the Kanfanar coat of arms painting

There is also the Croatian flag, hanging on a makeshift broom handle flagpole which is always flying at Amedea.

The Croatian flag hangs above Amedea

Ed says also that a favourite among patrons is the Croatian Smoki peanut puffs they offer and are one of his best-sellers which he never expected.

“The times we’ve sold out, some of our regulars have been genuinely sad. Other than that, our Traminac white wine seems to now have a real following too. In fact all the wines seem to keep our customers really happy, whatever their tastes, which is totally paramount.”

The Croatian products are a big hit among the bar’s British customers.

“Lots of them have been to Croatia on holiday, which means they’re usually familiar with at least one of the wines or beers already. Equally, we get lots of people about to go on holiday to Croatia, who seem to almost want a trial experience, which I hope we provide well.” 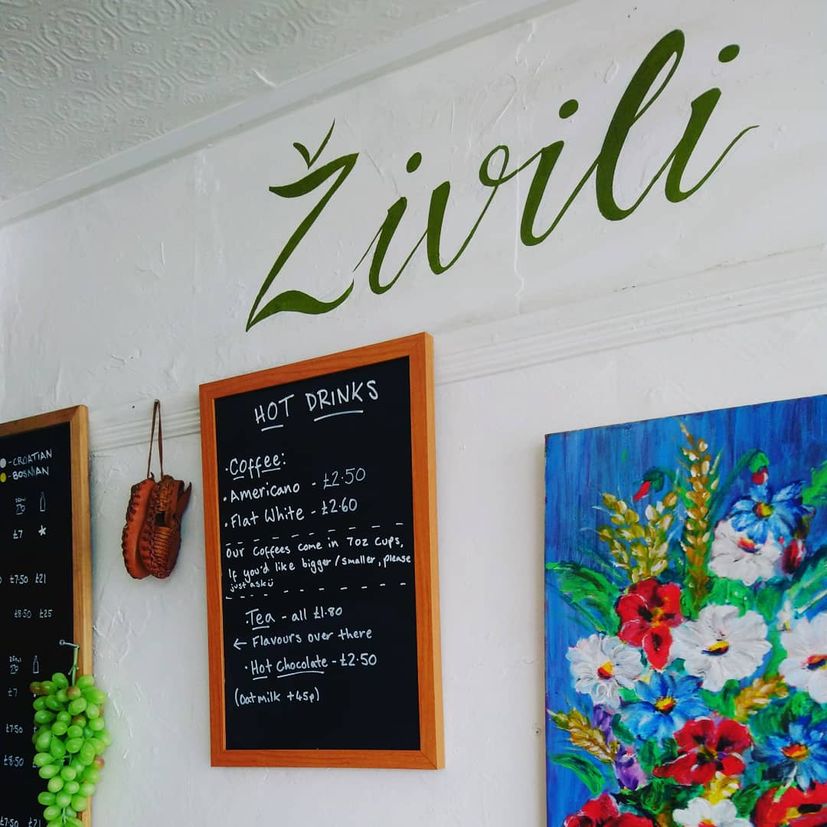 It is not only the local, Whitstable folk frequenting Amedea, with even some expats travelling from London to visit.

“I’m hoping over time, more and more Croats in the UK will hear about us.”

Ed still likes to visit his nona Amedea and other relatives back in Croatia at least once a year. As a bar owner in the UK, we had to ask what were his favourites in Croatia. 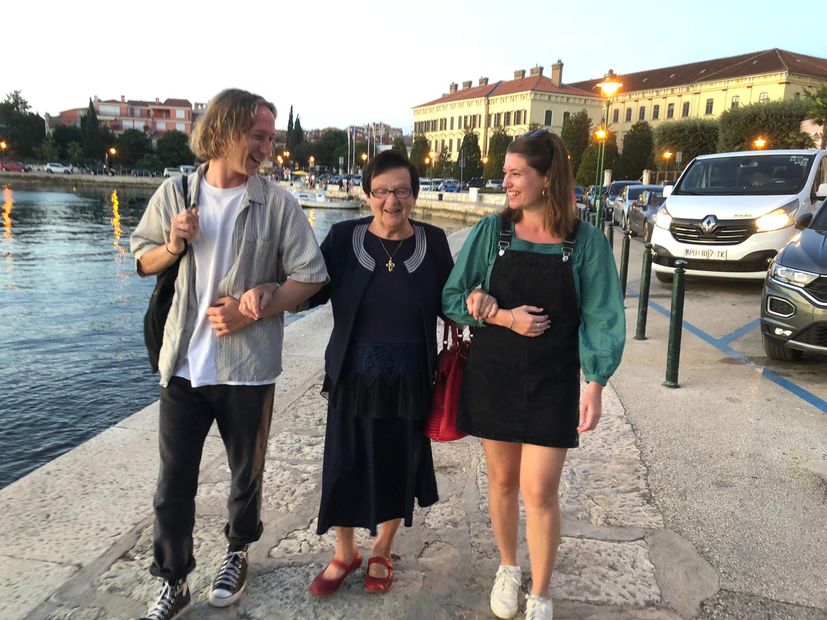 Ed and girlfriend Abbie in Rovinj with Amedea

“I think from my experiences watching the World Cup in Croatia, drinking at the beach bars with family, and being underage on holiday with my friend Aaron and buying 2 litre bottles from supermarkets – it just has to be Ožujsko for the memories. The most solid 5% lager going and some phenomenal branding too. My favourite Croatian wine, so far, is a really nice Postup from Matuško winery, which we will sell in the bar once we reopen for sure.”

Ed says that there are few differences between bars in Croatia and the UK.

“I think the typical British pub or bar today is unlike a drinking establishment in any other country. The style is so classic and easily distinguishable (even if it’s with a modern theme) and the British pub drinks menu is probably growing faster now than ever before, which is really exciting to see. But, I see it all the time, and before opening Amedea, I knew what I wanted to recreate. 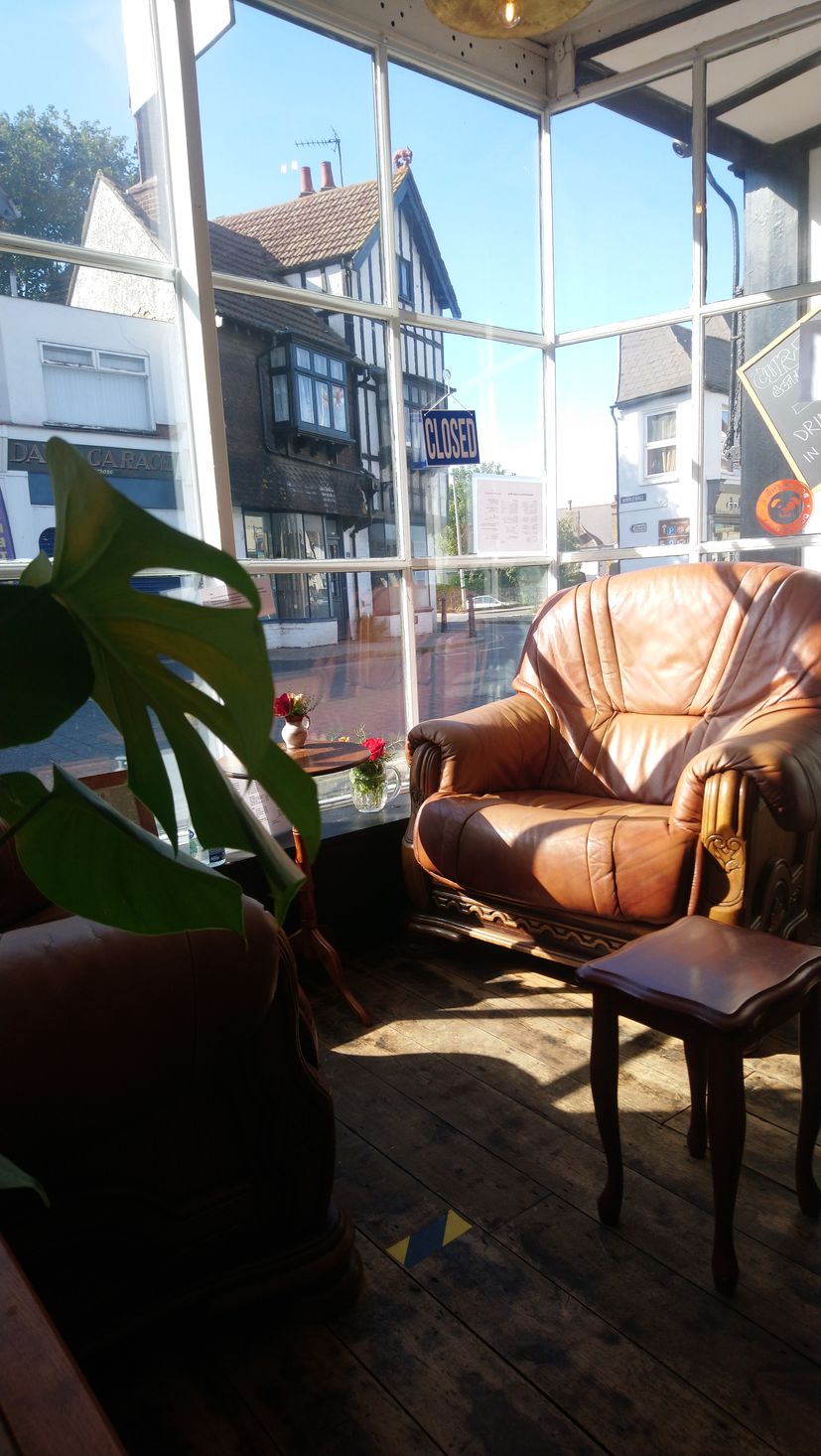 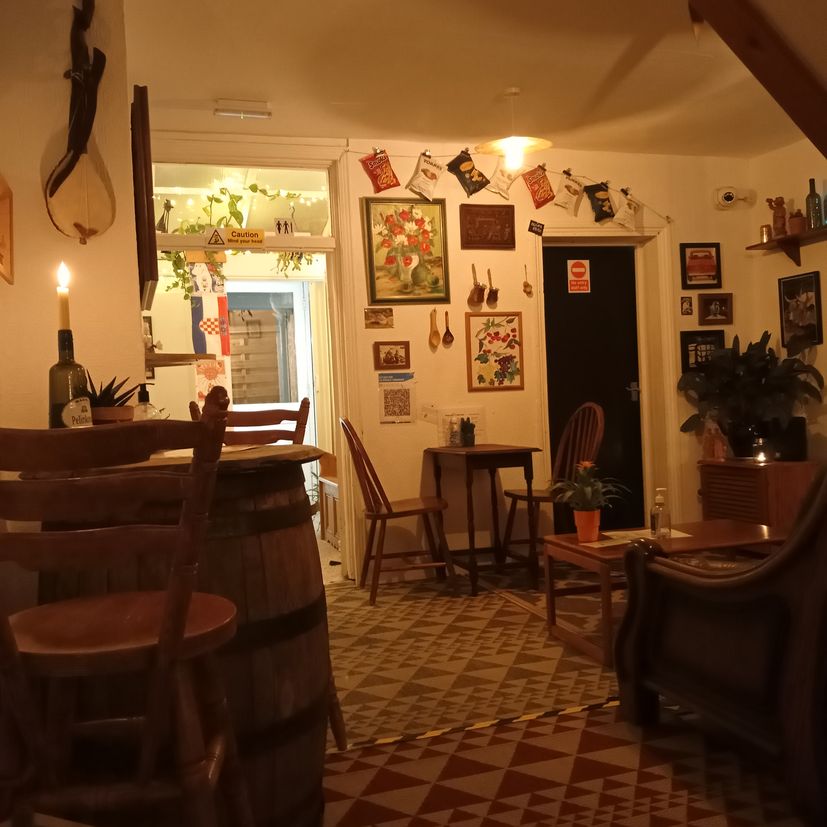 Anywhere in Eastern Europe, there will always be a cobbled backstreet with an almost hidden dive bar. It will have ridiculous things on the walls, the staff will be proud of the music they’re playing, and nothing in there is perfect. The menu is straight forward, the chairs are comfy, and most of all, people are really relaxing, having fun. I hope I’ve created the closest thing to ‘that bar’ possible, although nothing being perfect is quite convenient for someone like me. Lots of our first-time customers won’t have tried Croatian wine before, but I like to think we inform them about it at a level of complexity that suits them, if they want us to. I don’t want Amedea to ever feel exclusive, or to confuse anyone. That’s really important to me,” he says. 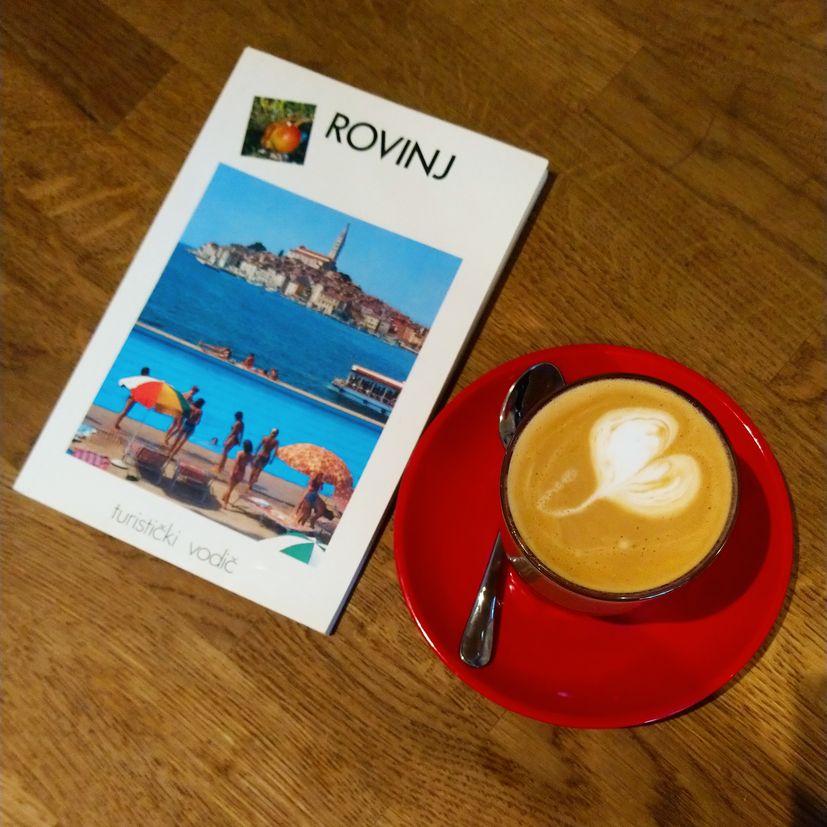 Coffee at Amedea and some reading material for patrons

The lockdown in the UK has been particular tough on bar owners, but it has not dampened Ed’s spirits.

“The lockdowns have been really tough for bar owners, and any business owners for that matter, but with some government support and a good landlord, who’s an understanding human being, we have just about got through it on the financial side. Mentally, it’s been a massive adjustment too. I went from 12 hour working days to no hours at all. Luckily I have a very patient, supportive and extremely hilarious girlfriend, Abbie, who’s really helped me so much through the last year. She’s kept my spirits and enthusiasm high, and in exchange, I’ve tried to keep the washing pile low. My friends, and my family have been amazing too. I can’t believe how supportive everyone’s been and how much they care about myself and Amedea, I am very lucky,” says Ed, who is positive about the future. 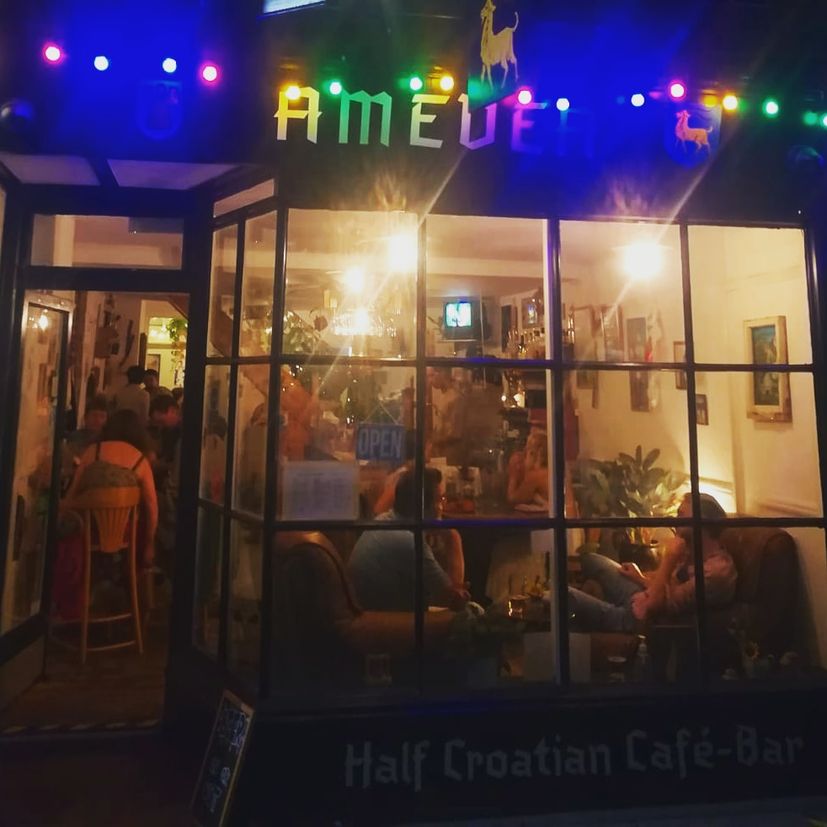 Amedea busy before the lockdown

“I think the future looks pretty good. I’m sitting here now, smiling to myself, genuinely so excited to reopen Amedea. I can’t wait to get back into that ridiculous place and see our smiling customers again. We’re also reopening with women’s safety as a real top priority, along with a lot of other ramped up precautions to help people enjoy themselves without having to worry. We’re proud to have staff from the LGBTQ+ community ourselves, and I hope we’re creating a safe, fun, comfortable space for people to come and enjoy themselves – whoever they are, and wherever they might come from,” he concludes.