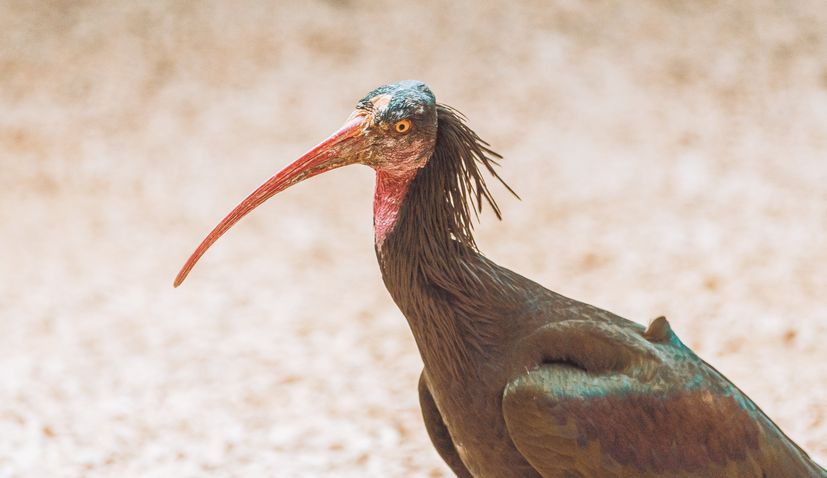 An extremely rare and endangered bird species has returned to Croatia after more than 200 years.

A northern bald ibis, which is a migratory bird found in barren, semi-desert or rocky habitats, landed in Grobničko polje near the city of Rijeka on Friday, immediately sparking interest from the media and the scientific community, Morski.hr reported.

The bird is 70-80 cm long. When it hatches, the bald ibis has feathers on its head. But when he grows up, his feathers fall off and his head remains bare, which is why he got the name bald ibis. The rest of his body is covered with black feathers that have a copper-green and purple glow in the sun. The bald ibis has a red beak and red skin all over the body, except for the very top of the head. It has long feathers on the back of the neck, ptice.info describes it.

The bird feeds on insects, lizards, and sometimes smaller mammals.

Dorijan Curać, a diver from the town of Bakar, spotted and videoed the bird.

“Yesterday quite by chance in the afternoon I saw a strange bird on the telephone pole and I thought it was a heron. Early in the morning, several photographers came in front of my house, someone called them, I didn’t know them, and I approached them as soon as I saw the same bird again, but it was not an ordinary bird but a very rare species of bald ibis. I took the effort and searched on the internet and I was glad that this rare individual came to my homeland. Then I came back and filmed it from about 2 meters away. I also registered it on the Animal tracker application,” Dorijan told Morski.hr.

On the Facebook page of the Waldrappteam organisation, which deals with the protection of this bird, they say that ‘Nova’ flew to the Adriatic coast and across the sea to Croatia, from where it is expected to fly further south. They also mention that the bird has deviated from its usual route, and should realise that it is on the wrong path.

In 2019 they say they had a similar situation, where a flock of protected birds that arrived over the sky of Croatia were illegally killed and they are asking all those who see this bird to share this news so that many people can be informed.

This species became extinct in Croatia in the 18th century and the last birds nested in the area of Pula. The same fate befell it throughout Europe, and habitat loss and hunting are considered the main reasons for her disappearance, said the Biom Association.

As early as 1504, it was declared one of the first protected bird species in Austria, which unfortunately did not save it from extinction.