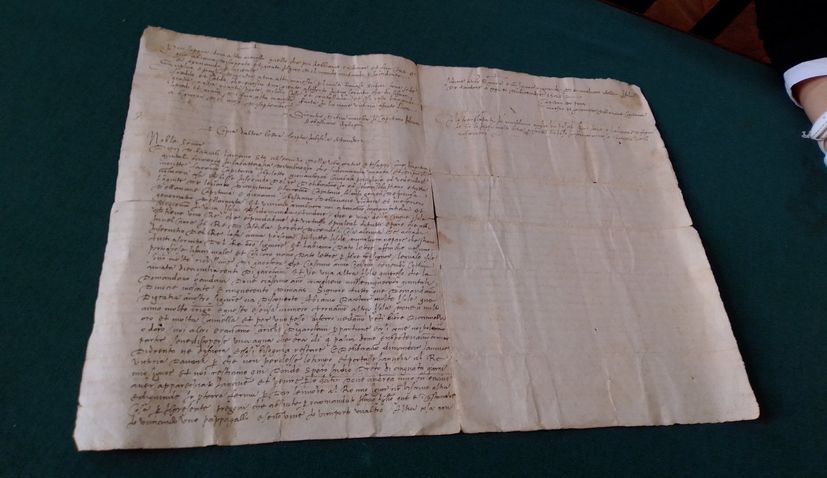 Letters from two participants in Magellan’s expedition, which have been in the possession of the State Archive in Dubrovnik since the 16th century, were presented in Dubrovnik on Friday.

The letters were written after the death of Magellan, and they contain the life stories of two adventurers from 6 centuries ago.

The Magellan expedition resulted in the first recorded circumnavigation of the Earth in 1522. It is considered by many as one of the most important events in history for its scientific, socio-economic, political, philosophic and theological consequences. The expedition was sponsored by the Hispanic Monarchy aiming to find a maritime route sailing westwards from Europe to the East Indies across the Pacific Ocean.

>The letters and stories about their re-find were presented by the deputy mayor, and also the honorary consulate of Spain in Dubrovnik, Jelka Tepšić, director of the State Archive in Dubrovnik, Nikolina Pozniak, dr. sc. sc. Lovro Kunčević from the Institute of Historical Sciences HAZU in Dubrovnik and Zrinka Lucianović from Dubrovnik heritage.

Pozniak welcomed the gathered as Lucianović noted that the Republic was a world power of that time. Kunčević revealed more about the background of the letters, stating how they reached Dubrovnik and the content of them.

“One of the letters is written by Captain El Cano, the captain of the ship Victoria. In the letter he informs says that the expedition succeeded, but also gives some tragic figures, stating that only one of the 18 crew members survived,” he said.

These are transcripts of letters from the 16th century, when they were translated into Italian. While the first letter was known before, the second letter is even more interesting, because its copy has been preserved only in Dubrovnik.

The second letter was written to an unknown recipient by Giovanni Battista di Ponzorone on December 21, 1522, from the Maluku Islands. Ponzorone was the navigator of Magellan’s captain’s ship, Trinidad, which had to remain on the Maluku Islands due to great damage.

In his letter, he reports that after Magellan’s death, the two remaining ships managed to reach the Maluku Islands, rich in spices, especially cloves, cinnamon and nutmeg, but also gold, and that they established cordial relations with local rulers, the State Archive in Dubrovnik commented.

The letters were sent to the Dubrovnik government in 1523 by a diplomat from the island of Korčula with many other documents, and the transcripts were made in Dubrovnik in order to be preserved. The originals are in very poor condition and are kept in the Dubrovnik archives.

Kunčević emphasized that letters are important for world history in the widest sense of the word.

Photos of the letters are also exhibited as part of the exhibition “Longest journey – the first sailing around the world” which can be viewed in e Lazzarettos in Dubrovnik until September 25.