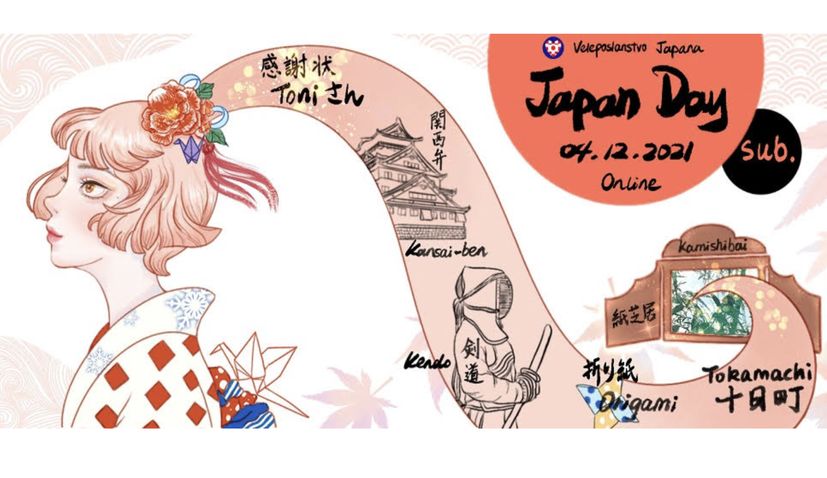 10:00 start of the programme – Meet Osaka (Kansai)-ben; lecture on dialects in Japan

In this lecture, viewers will be introduced to the differences in dialects in the Japanese language. In addition to the standard Japanese language spoken in Tokyo, the most widespread dialect is that spoken in Osaka and the surrounding Kansai region. In addition to interesting comparisons of differences, viewers will also get acquainted with the character differences of Japanese living in Tokyo and Osaka. The lecture will be given by Jelena Yamasaki live from Osaka.

Kamishibai is a form of Japanese street storytelling using images that alternate in a special frame. This storytelling was especially popular in the early 20th century before the advent of television, and this time through kamishibai we will present three instructive stories that convey messages about sustainable development (SDGs). Kamishibai will be presented by the Kozlići Association.

11:40 Meet kendo in Croatia; an story on the martial art of kendo

In cooperation with the Croatian Kendo Federation, viewers be introduced to kendo – the martial art of “swords” made of bamboo, which are called shinai. Find out how kendo came about, where you can train and see what typical trainings and fights in tournaments look like. And in addition to kendo, a demonstration of iaida – the skill of handling a katana – will take place.

Origami is the art of folding paper into three-dimensional figures of animals, people, objects, etc., and gained special popularity in Japan in the 17th century. Today it is spread all over the world and in addition to entertainment, it has found its role in education, art, science, fashion and architecture. In this lecture, Sanja Srbljinović Čuček, president of the Croatian Origami Society, will explain what origami is and will reveal a little more about its development.

13:00 Tokamachi – a friend of Croatia; story on Tokamachi

At the time of the FIFA World Cup in 2002, there was a camp of the Croatian national team in the city of Tokamachi. Since then, Tokamachi has nurtured a special friendship with Croatia, so in 2012, according to the project of Croatian architects Penezić and Rogina, and at the initiative of the then Croatian Ambassador to Japan Dr. Štambuk, the House of Japanese-Croatian Friendship was built.

During the Tokyo 2020 Olympic and Paralympic Games, Tokamachi once again hosted the best Croatian athletes, and see more about this connection with Croatia in a documentary review by Sven Bjelan, who spent four years in Tokamachi as a coordinator for international relations (CIR – Coordinator for International Relations).

13:30 Award ceremony of the Minister of Foreign Affairs of Japan to Antonio Jerković

With his work and commitment, Antonio Jerković has greatly contributed to the spread of Japanese food culture in Croatia. After the opening of the popular store with Japanese products Destinatio Tokyo in 2011, in 2016 Gyoza Sake Bar followed as the first “izakaya” restaurant in Zagreb. This place was very quickly recognised as a place for lovers of authentic Japanese food. Unfortunately for everyone, Toni-san unexpectedly left us on September 14, 2020. On this occasion, Ambassador Kaji will present a letter of thanks to the family members of the Minister of Foreign Affairs of Japan, in recognition of his contribution to promoting friendship between Japan and Croatia.