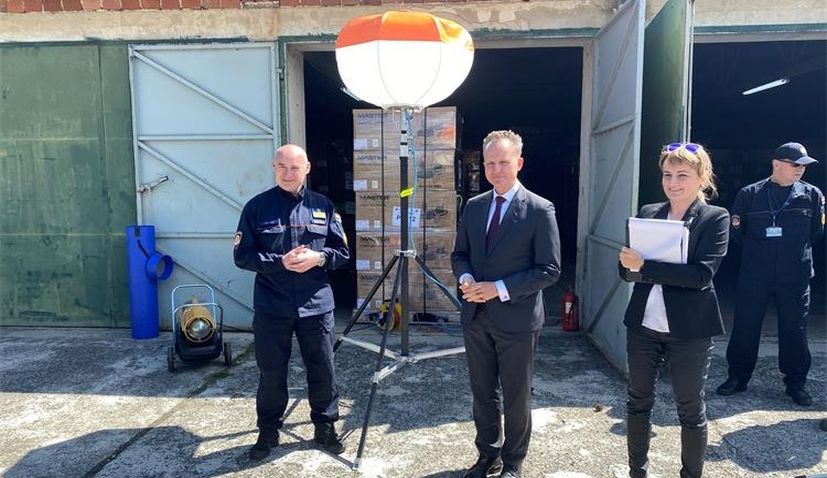 ZAGREB, May 27 (Hina) – The German government has made a donation of technical equipment valued at €85,000 to Croatia’s Civil Protection in its efforts to deal with the consequences of the March 22 earthquake in Zagreb and its environs

The donation has come from the German Technisches Hilfswerk (THW) civil protection organisation controlled by the German federal government and Germany’s Ambassador to Croatia, Robert Klinke formally presented the donation to Assistant Interior Minister Dami Trut at the civil protection logistics centre in Jastrebarsko, on the outskirts of Zagreb.

The equipment consists of ten light balloons and one hundred diesel heaters used in tents. Ambassador Klinke said that the equipment can be used to address to quake consequences and for other civil protection activities.

The diplomat mentioned the fact that as a result of the two strong earthquakes that struck Zagreb on March 22 during restrictions imposed because of the COVID-19 epidemic, many citizens can still not return to their homes before the comprehensive reconstruction of their buildings.

“The Federal Republic of Germany feels solidarity for its friend Croatia and has responded to the Croatian government’s call and has donated this equipment to Croatia’s civil protection organisation which can be transported and used day and night both during repairs and in rescue missions,” Ambassador Klinke said and wished Croatia a lot of strength in the reconstruction of Zagreb and its environs affected by the earthquake.

Assistant Minister Trut expressed gratitude for the donation and described the permanent good cooperation between various institutions and organisations in both countries.

“In the past ten years we have been partners in 18 projects and now in another three and they are mostly conducted with Germany’s THW as the greatest force in civil protection in Germany. In addition to this donation, we received support during the migrant crisis and during the COVID-19 pandemic we received tests and medical protective equipment,” Trut said adding that Germany’s greatest support to Croatia was in mine clearance valued at €9 million.