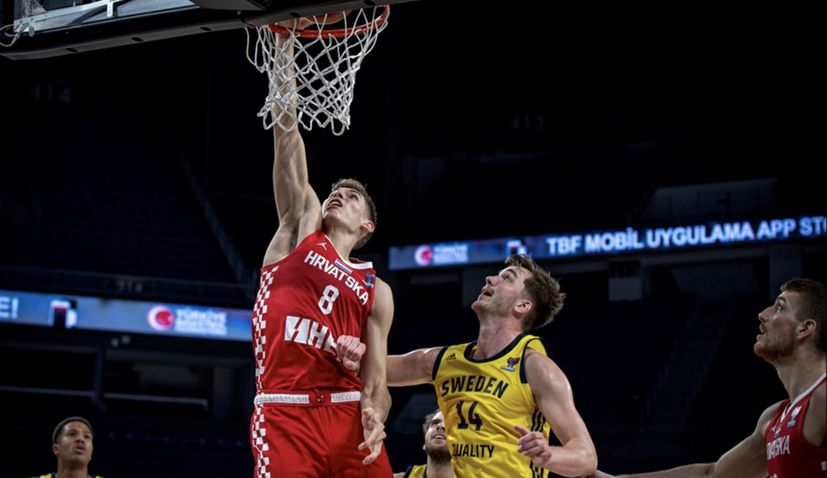 Croatia in action against Sweden on Sunday (Photo credit: Fiba.basketball)

Croatia has qualified for EuroBasket 2022 after beating Sweden 87-72 in Istanbul on Sunday.

For Croatia, Pavle Marcinkovic top-scored in today’s win with 20 points. Captain Miro Bilan led the rebounds with 10 and Roko-Leni Ukic topped assists with 5.

Croatia is now 4-0 in their qualifying group after today’s win and has guaranteed a place at the 41st edition of EuroBasket which will take place in 2022.

Croatia leads Group D with a maximum of 8 points, followed by the Netherlands (6) and Sweden and Turkey (5). There are still two qualifying rounds remaining for Croatia in Group D which will be played in February.

EuroBasket was originally scheduled to take place in September 2021, but due to the coronavirus pandemic and the subsequent postponement of the 2020 Summer Olympics to 2021, it has been postponed to 1 to 18 September 2022.

Like the previous two editions, the tournament will be co-hosted by four countries. Games in the group stage will be held in Germany, the Czech Republic, Georgia, and Italy. The knock-out phase will be played in Berlin, Germany.

Croatia and host nations Germany, Czech Republic, Georgia, and Italy are the only nations confirmed at the moment.