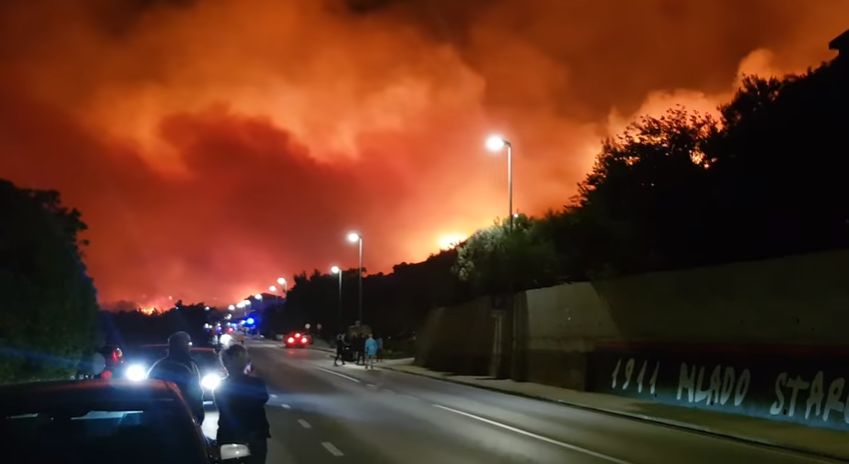 Whilst fires were controlled yesterday afternoon in Podgora, there have been more problems overnight for residents and tourists on Croatia’s Makarska Riviera.

Around 2:30 am on Monday morning a large blaze has started in Tučepi, just one town down from Podgora.

According to daily 24sata, tourists have been evacuated from three Tučepi hotels – Jadran, Neptun and Tamaris as around 200 firefighters tackle the blaze.

Roads again around have been closed in the area, including the DC512 Makarska-Vrgorac, and the Jadranska magistrala (DC8) from Makarska to Tučepi.

The fire is spreading in the direction towards Makarska, and firefighters say that due to winds there will be a big battle to contain the fire during the day.

“The fire started last night around Zečeva near Blato in Tučepi. If it was a short circuit which occurred or is the cause of something else we can only speculate at this stage. Nothing is known yet. This fire went in the other direction from the one yesterday, from Tučepi towards Makarska”, said Goran Bušelić, commander of the Tucepi Fire Brigade, told Slobodna Dalmacija.

There were no injuries reported at this stage. Watch the video below:

(Footage from the blaze below courtesy of David Rezar / YouTube)

UPDATE: 12:30 pm – Around 50 members of the Croatian Armed Forces are on the ground to help firefighters in controlling the blaze, which is proving difficult to contain. Canadair aircraft have been deployed also. Guests have been returned to the hotels.