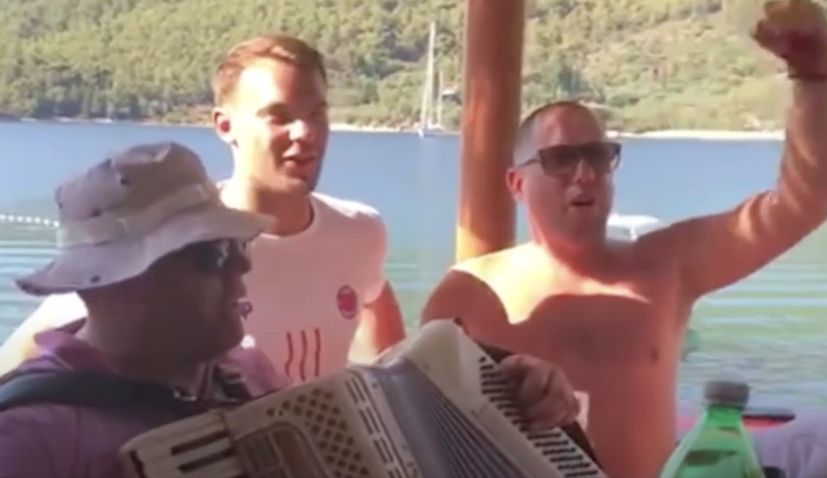 12 July 2020 – The song ‘Lijepa li si’ is one of the main anthems of the Croatian football team and it also seems to be a favourite of one German star.

Germany and Bayern Munich goalkeeper Manuel Neuer showed how familiar he was with the tune in a sing-a-long with friends on the Croatian coast on Saturday.

Neuer lit up social media when the video of him singing the popular Croatian song in the company of  Croatian water polo player Nikša Dobud, 24sata reported.

The pair also spent time in the water where Neuer showed off his keeping skills in a fun game of water polo.

Neuer arrived on holiday on the Dalmatian coast last week after claiming the German Bundesliga for the 8th time with Bayern Munich. He is a regular visitor to Croatia and enjoys spending time in Brela on the Makarska Riviera.

Late last week, Neuer popped into the village of Gata during a bike ride and shouted a round of drinks and signed autographs at Grill Maleni.

Last summer, Neuer and wife Nina spent the summer cycling around the coast and apart from the Makarska Rivieria, visited Dubrovnik and Hvar.

Two months ago, Neuer signed a new contract with Bayern, keeping him at the club until 2023. It is not known how Neuer learned the lyrics, perhaps Bayern teammate Ivan Perisic helped him.

Video below courtesy of 24sata.