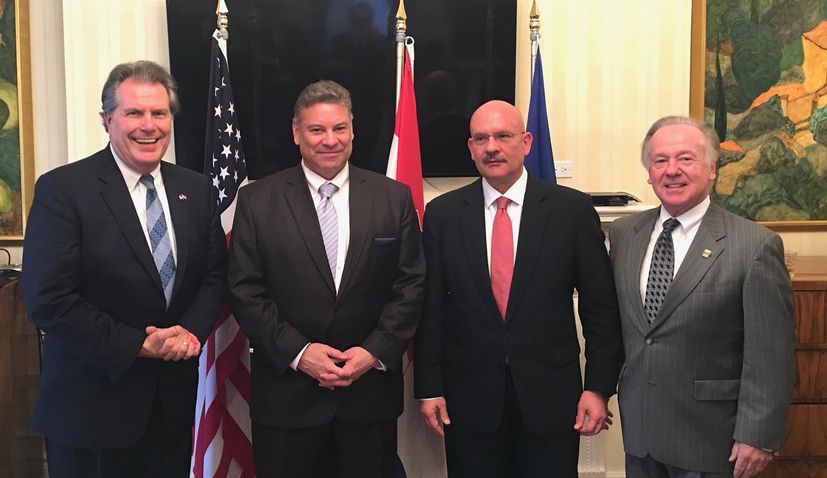 On Thursday, March 17th, the Republic of Croatia held an Embassy reception in honor of the US-Croatia Strategic Alliance meetings held in Washington DC during the week.

A fifteen-member Croatian delegation was invited to the nation’s capital for high level meetings that involved five Croatian Ministries was a hugely significant geo-political development for the Republic of Croatia.

The objectives of these meetings were to solidify the alliance within the six pillars of a growing bilateral relationship and to strengthen our shared goals of maintaining peace, security, stability and economic development in Southeast Europe.  It should also be noted that April 7, 2022, will be the 30th Anniversary of the U.S. recognition of an independent Republic of Croatia.

The Croatian delegation from Zagreb was led by Petar Mihatov, Political Affairs Director with Croatia’s Ministry of Foreign and European Affairs (MFEA).  It also included Vladimir Drobnjak from the Prime Minister’s office as well as Stribor Kikerec and Ivana Zivkovic from the MFEA.  Brigadier General Tomislav Galic represented the Republic of Croatia with the U.S. Department of Defense and with all meetings at the Pentagon. Croatian Ambassador to the United States, Pjer Simunović, and Deputy Chief of Mission, Danijel Medan, attended many meetings and were gracious hosts at the evening reception. 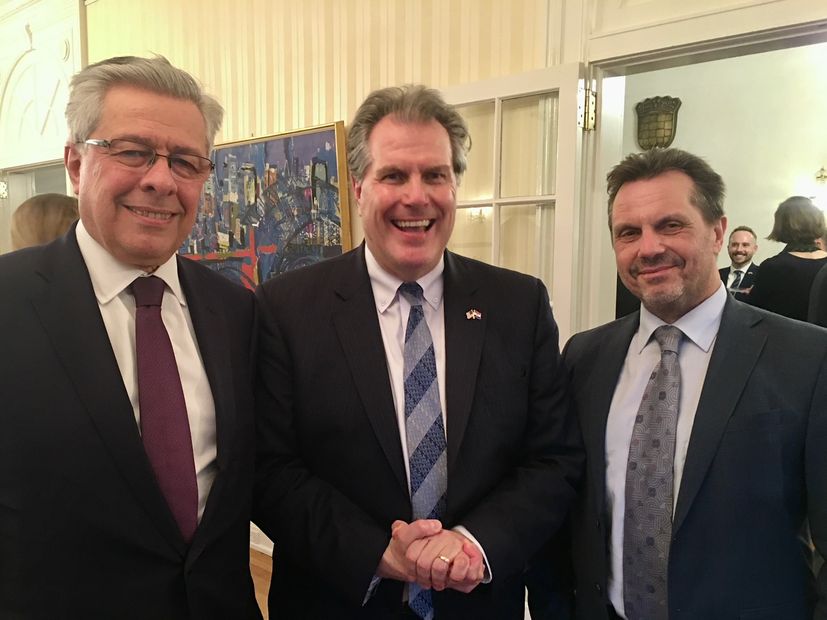 This diplomatic gathering was comprised of many prominent US State Department diplomats and included the remarkable Ukrainian Ambassador to the US, Oksana Markarova.  She expressed her gratitude during this trying time for her country to all those in attendance for the extensive love and support received from the United States, Croatia, and other NATO-European countries represented at the Embassy gathering.

It was gratifying to hear from DAS Escobar that the Republic of Croatia is now even more important as a US and NATO ally in the Central Europe region due to the recent severe developments pursuant to current crisis in Ukraine.  Charge d’Affaires Mark Fleming, who was in town from his post at the American Embassy in Zagreb, shared details about many of his activities in Croatia over the past ten months.  He shared that he is particularly proud that “Croatia is considered a “rock-solid NATO ally with the United States.” 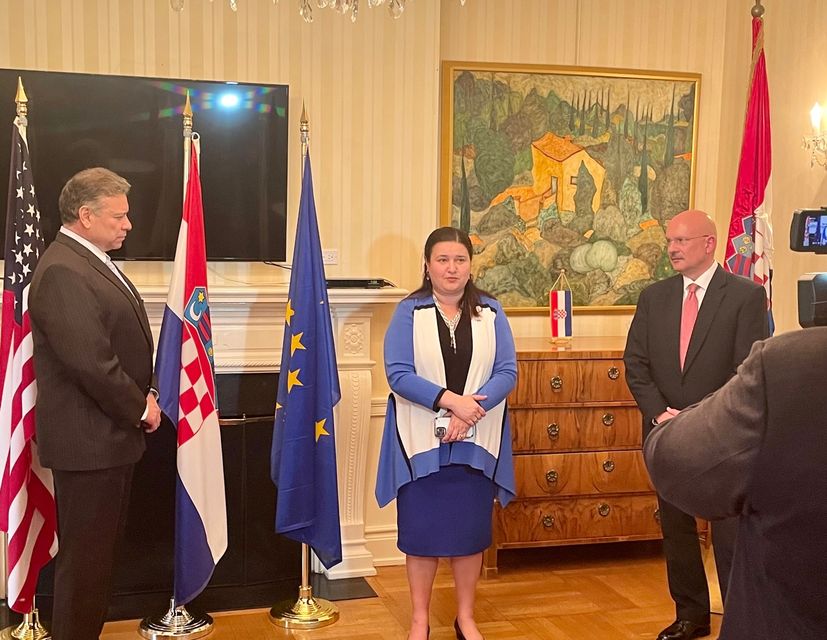 The reception was a very unique opportunity to discuss current and future issues in-person with Croat and American diplomats.  These discussions included an update and review of current details regarding an NFCACF priority issue, the Avoidance of Double Taxation Treaty which has been making notable progress as of late.

Also seriously discussed was the complicated topic of electoral reform that deals with the unconstitutional election framework in Bosnia and Herzegovina (BiH).  As the Croatian American community fully realizes, the current framework consistently penalizes the Croat community in BiH.  This matter was an important topic during the evening’s Embassy gathering and was made more so by the upcoming BiH elections scheduled to be held this coming October.

The following is the text of a joint statement by the United States of America and the Republic of Croatia on the occasion of the U.S. Croatia Strategic Dialogue.

The United States and Croatia committed to work together to advance shared foreign policy goals, intensify bilateral cooperation and strengthen the Transatlantic bond.  They also committed to promote democracy, rule of law, and fundamental human rights both regionally and globally, building on pledges made during President Biden’s Summit for Democracy in December 2021.  The United States and Croatia underscored their strong support for Ukraine’s sovereignty and territorial integrity, and called on Russia to cease its unprovoked war.  They underscored a joint desire to defend the common values of the Euro-Atlantic community and stressed the importance of preserving the rules-based international order, supporting good governance, and protecting democratic societies.  The United States welcomed Croatia’s entry as the 40th member of the Visa Waiver program and affirmed Croatia has made great progress toward becoming a partner country in the Global Entry Program.  The United States welcomed Croatia’s commitment to fully empower a Holocaust envoy with a view to intensifying dialogue on all related issues, including property wrongfully seized during the Holocaust.

As NATO Allies and strategic partners, the United States and Croatia underscored their commitment to promoting peace and stability in Southeast Europe and Europe as a whole.  Both sides emphasized the continued importance of developing high-end defense capabilities, conducting bilateral exercises and training activities to improve interoperability and readiness, and the importance of meeting NATO commitments in support of our collective security.  The United States and Croatia reaffirmed that the most recent cooperation resulting in Croatian procurement of M2A2 Bradley vehicles is a significant step toward meeting one of Croatia’s priority NATO Capability Target requirements.  The two countries intend to work closely on the future Strategic Concept of NATO, with a view to strengthening the Alliance in fulfilling its mission as the guarantor of peace and security in Europe.  Both parties underlined the importance of EU-NATO cooperation, ensuring complementarity and strengthening interoperability, and recognized NATO as the foundation of Euro-Atlantic security and the essential forum for collective defense of the transatlantic community.  The United States and Croatia underscored the importance of cybersecurity and intend to look to strengthen cooperation in this field.

The United States and Croatia recommitted to their shared goals of increasing energy diversification and security and tackling climate change through decarbonization and clean energy policies, as well as the adaptation of our societies to climate change.  The United States lauded Croatia for its leadership on energy diversification through the opening of the floating liquefied natural gas terminal off Krk island and noted the shared goal that Croatia support energy diversification for the broader region through projects like the Southern Connector to Bosnia and Herzegovina.  The two sides explored opportunities for strengthening cooperation in renewable energy production and distribution.  Croatia reiterated its commitment to phase out coal by 2033, and the United States praised Croatia’s goal to achieve net zero emissions by 2050 and join the Global Methane Pledge.  Both sides committed to deepen bilateral and regional cooperation on energy and climate through the Partnership for Transatlantic Energy and Climate Cooperation (P-TECC).

The two sides reaffirmed their shared commitment to broaden and deepen bilateral economic and commercial cooperation, expressing satisfaction with reaching a final stage of negotiations and recognizing the desire for a swift conclusion of a treaty for the avoidance of double taxation.  They shared ideas on increasing trade and investment across various sectors.  The United States welcomed Croatia’s invitation to begin the accession process to the Organization for Economic Cooperation and Development.  Croatia and the United States exchanged ideas and concrete plans for intensifying cooperation taking into account the growing urgency for development and humanitarian aid for countries in need.

The United States and Croatia share extensive and meaningful people-to-people connections that promote mutual understanding between the people of both nations.  Both countries remain committed to expanding educational, cultural, and professional exchange opportunities, including through the Fulbright Program.  The two sides look forward to collaboration on STEM programming and enhanced connections between U.S. and Croatian universities.