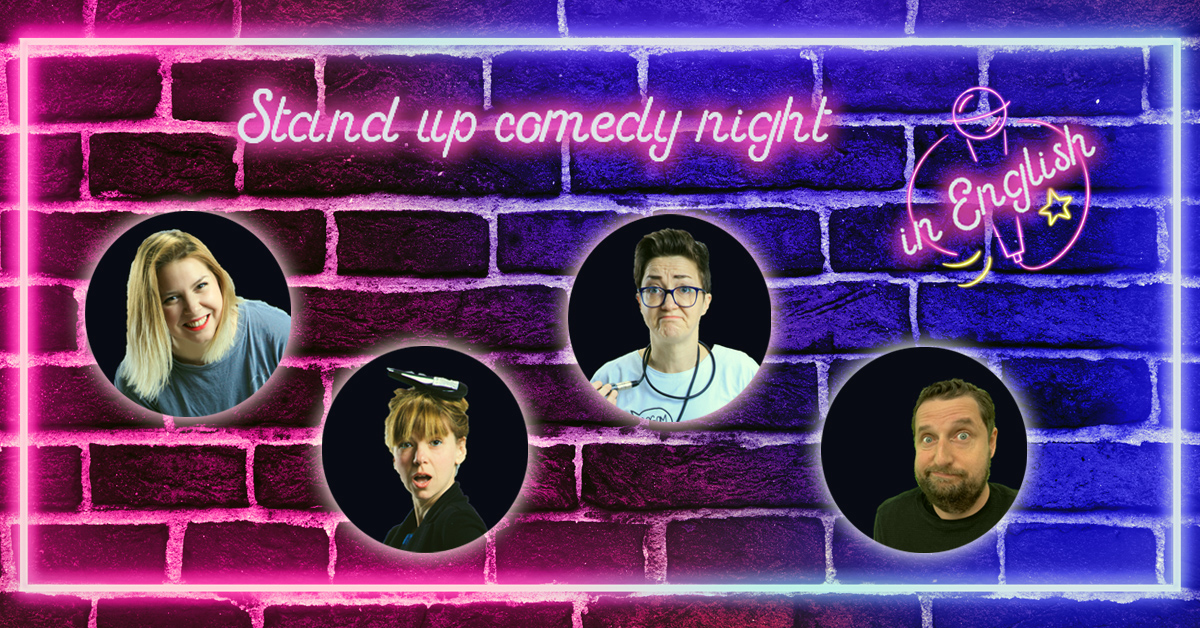 Studio smijeha is the first and the most popular brand for stand up comedy in Croatia and after a long break, they are finally organizing stand up comedy nights in English again and they intend to do it on a regular basis.

First one in the “series” will happen on Wednesday, November 16th  in Kolding Caffe in Berislavićeva street no. 8 . In this evening of laughter and fun, you will be entertained by four amazing comedians Marina Orsag, Vlatka Mifka, Miranda Lončar and Lloyd Evans.

They can’t wait to finally laugh with you again so join them this Wednesday!

Marina. Eternal Petar Pan with inexhaustible energy who skillfully leads the audience through every corner of her unusual and hilarious mind.

One of the first five comedians in Croatia and initiator of open mic nights and stand up comedy workshops in Croatia. Founder of comedy club Studio Smijeha and creator of Croatian comedy scene as producer, organizer and mentor to 24 now professional comedians. In seventeen years as a stand up comedian she collected over 3500 shows in Balkan region and throughout Europe, award for the best Balkan comedian 2013, Jokenation Continental Europe and Russia best comedian, Lent Maribor Festival first place by audience choice and European hero of humor in Amsterdam.

She is a weird atheist with a poor memory. By heart she only knows two things: Lord’s prayer and her ex’s number. Neither of them is answering.

When she came of age her parents gave her the best contraception a woman can have: feminism. Combined with a certain regard for female mustache. A woman can do anything, they said. So she does everything. She works and cleans and cooks and takes care of twins. All in all, she is massively joyous to be alive and laugh about the good and the bad life brings. Or … she dies. Jokes aside, since she started doing stand up she collected a serious amount of preformances through entire Balkan region and she also performed in London, Budapest and Zurich. In 2014 she appears in „Stand-up Express“ by Comedy Central Extra and in 2017 in „Comedy Klasik Show“ on Klasik TV.

Cheerful and bright comedian except when she is not. With her unusal storytelling style and long formats of short format she very auickly gets audience on her side. Her brain sometimes works to fast for her own good and to slow to stop the mouth from speaking in certain situations.

In six yeras long carrier she has over 500 performances in the Balkan region and she also performed in Bulgaira where, as she says, still live her biggest fans. She performed with stand up and improv in 2017 in „Comedy Klasik Show“ on Klasik TV.

Lloyd Evans is a Manchester-born writer and filmmaker who has lived in Croatia for 13 years and recently moved to Zagreb. Lloyd has made numerous TV appearances to share his knowledge about Jehovah’s Witnesses, a religion he walked away from soon after leaving the UK. Lloyd also has two books and a YouTube channel dedicated to discussing atheism, the Bible and his former religion. Now he is transforming all of that into stand up.