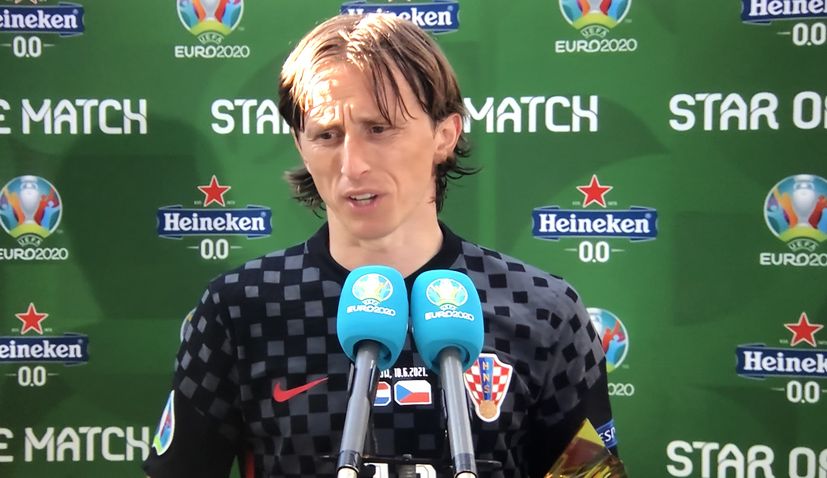 Croatia and Czech Republic shared the points in Glasgow today after a 1-1 draw in their Euro 2020 Group D match. Croatia now must beat Scotland in their final match to have a chance to advance to the next round.

Croatia fell behind in the 37th minute when Patrik Schick converted a 37th minute penalty. Ivan Perišić made it 1-1 in the 48th minute.

The reaction from the Croatian camp after the match.

“We hoped to win but the first half was very bad, we were unorganised. In the second half we were more dangerous but could not get the second goal for the win,” said Modrić, who won the man of the match award.

“It is a sour taste (winning the award). We have to win our next match to go through and that is a good thing.”

“If I am honest, we were even worse today. From Livaković to everyone, we all need to be better and win the next match. We started bad, it was not good,” a critical Perišić said, before adding.

“We have to be 20-30% better or we will be going home. We have one more chance, it is in our hands. It will be difficult against Scotland, we have never beaten them. They will be hard at home but we can beat them.”

“Regarding the penalty, how could you not be disappointed with the decision. I didn’t see Schick at all and I went for the ball. That was my natural jumping style, how can you jump without using your arms, the ref didn’t even see it and if it was not for VAR it would not be a penalty. It is what is it is, what can I do now. In the first half we were not on our level, we had to regroup and showed more in the second half but still not enough, some things are not clicking. We have one more game, we have to give it our all, it is in our hands and I believe in this team.”

“The first half was bad, were not on the level, we didn’t derseve anything in the first half as we were not dangerous at all. They were more aggressive than us in the first half. In the second half we were better and had chances to win, but so did they, so a draw was the right result.”

“We deserved a draw but we started bad, we were slow, we done a lot of running for no point, we were not compact. After the goal we played a lot better, we created some chances and half chances to win but not enough. A win in our final match will take us through to the next round. We miss energy and we made those changes at half time for that reason.”

Croatia and Scotland meet on Tuesday night (9 p.m.) at Hampden Park in Glasgow.