Home » News » From USA to Croatia: ‘I hope more Croatian descendants will come’ 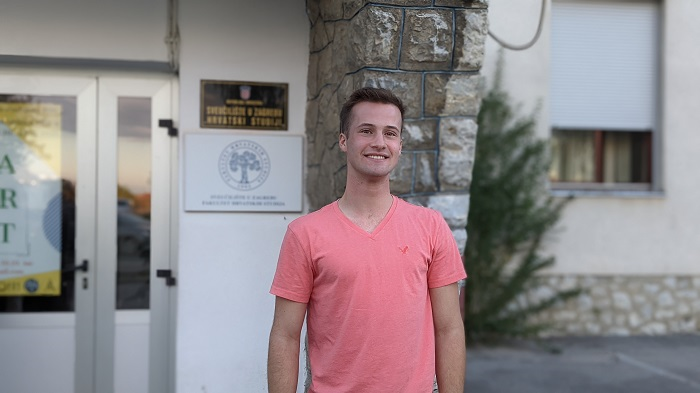 Last year, over 33,000 people immigrated to Croatia from abroad. Whilst a large proportion, almost one-third, came from year, Bosnia and Herzegovina, there has been an influx from first and second generation Croatians from Australia, Canada and the United States.

A number of the younger generation with Croatian roots abroad are taking up study opportunities in Croatia as a foot in the door to sample a potential future in the country.

One of them is Nikola Michael Sušec, who came from the United States and is a student at the University of Zagreb Faculty of Croatian Studies.

Can you briefly introduce yourself to us, where you come from, what school you graduated from, what your hobbies are?

My name is Nikola Michael Sušec. I grew up in a small town in Oregon, U.S.A., and graduated from high school. I like writing, hiking, and going out with friends.

Can you tell us a little more about your ancestors who immigrated to the United States?

My father grew up in Croatia, my mother in America. After they met in college, they moved to America to start a family.

Is there any Croatian organisation near you that brings Croats together and maintains Croatian identity?

In Portland, the largest city in Oregon, the small Croatian community gathered for Mass and lunch. Like in our family, the adults spoke Croatian to each other and their children, while kids spoke English with their friends. I did not socialized much with them, because I lived three hours away from Portland. In and around my small town, my family were the only Croatians.

How did you learn about the opportunity to enrol in the Faculty of Croatian Studies?

My father was familiar with the University of Zagreb and recommended the Faculty of Croatian Studies.

I, like my whole family, had always dreamed of moving to Croatia. In high school, I prepared to sign up for the Faculty of Croatian Studies, but as life changed, I began to have other plans. I worked for a year after high school, starting a business. I came to Croatia after the crescendoing realization that I did not fit in with America. Suddenly, I decided to come to Croatia, and unsure of my future, signed up for Croatian Studies. Days before college began, I looked back on my old high school newspaper, and noticed that I had written that I would take a gap year and then attend college in Zagreb, which, after all the twists and turns, is exactly what happened.

Which study did you choose and why? What knowledge do you think you will gain from your studies?

I chose Croatology because I wish to improve my Croatian language skills and get to know Croatia.

Can you perhaps draw parallels and assess what are the advantages and disadvantages of living in the US compared to Croatia?

Many Croatians think the U.S. is objectively richer, but outside of working hours, Croatians live a fuller, richer life, with more socialization, more holidays, and more coffee!

Do you think Croatia has the potential, for example, to attract several thousand or perhaps tens of thousands of descendants of Croats from North and South America to return and live in Croatia?

I certainly do think Croatia has the potential to attract thousands of young diaspora Croats. In the countries to which Croats historically emigrated, such as the South American countries and even the United States, life is becoming less easy. Under the Biden administration, the U.S. economy is worsening, rather than recovering from the pandemic. In this age, paying for college and an apartment are impossible in America, but possible in Croatia. I pray that other Croatian descendants will see the opportunity that I have seen, and come to this beautiful country as I have.

Would you recommend that other young American Croats come to Croatia to study? If so, why?

To any young Croat who is curious about their homeland, I say, “Come!” I already love life in Croatia: I have gone out more in the past few months than I have my entire life in America. The scenery is incredible, the people are generous, and every Croat is thrilled that one of theirs is returning. The country seems so real; its roots are dug centuries deep into this earth. These are your roots, and know, young Croats, that your homeland is here.

Interview by Wollfy Krašić, Assistant Professor at the Faculty of Croatian Studies.