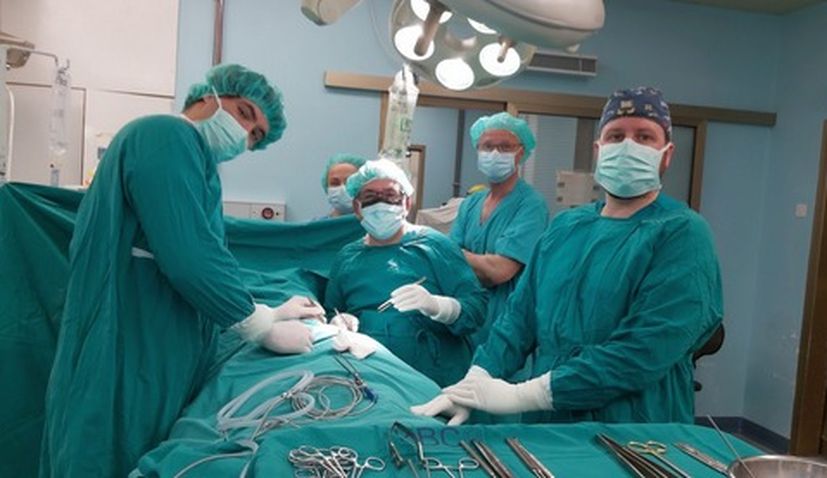 After the recent news that doctors at the Clinical Hospital Centre Rijeka (KBC Rijeka) became the first in Croatia to close the rupture of the muscular barrier of the heart on a patient, which resulted from a heart attack, without performing cardiac surgery, there has been more success at the hospital.

On Tuesday, for the first time at the hospital, a 60-year-old man was successfully fitted with a DBS (deep brain stimulation) device, similar to a pacemaker, in which electrodes placed in precise target sites in the brain and connected to a pulse generator in the chest, generate high-frequency electrostimulation, KBC Rijeka said.

“Today’s procedure is just one of the forms of cooperation between the Department of Neurosurgery of the University Hospital Dubrava with the Clinic of Neurology of the University Hospital Centre Rijeka. I have been cooperating with assistant professor Vladimir Vuletić, the head of the clinic, since the beginning of the installation of DBS, with which we started in KB Dubrava, and now for the first time we have performed the procedure in Rijeka. In the COVID pandemic, patients who need urgent replacement of neurostimulators are also endangered and therefore I can only thank everyone in KBC Rijeka who participated in the organization of this procedure and I sincerely hope that this is just the beginning of cooperation between KB Dubrava and Clinic for Neurology KBC- and Rijeka. We have a great desire to help establish the RONNA robotic system at the Rijeka Clinical Hospital, which will further raise the standard of treatment of patients,” said Professor Darko Chudy after the successful procedure that lasted about an hour.

Deep brain stimulation has become the leading operative method in motion sickness and is most commonly used in patients with advanced Parkinson’s disease (PB), dystonia, and essential tremor (ET) in whom drug therapy no longer yields satisfactory results or has led to significant side effects and is pronounced disability.

Of all the countries in the region, DBS first started operating in Croatia in 2000 thanks to Professor Chudy, and before the COVID pandemic, the installation was mostly at the Department of Neurosurgery at KB Dubrava, where patients from the entire region were treated in this way.

“As the director of KBC Rijeka, I am extremely proud of this professional success. Behind him is the superior knowledge of our fellow neurologists and extensive experience in the field of movement disorders. It is little known that now the team of neurologists of KBC Rijeka led by Dr. Vuletić is one of the leaders in Croatia and the wider region in the field of movement disorders with a special emphasis on diagnosis, selection, preparation and monitoring of patients for such procedures, to which patients have so far been referred to other institutions. That is why we are especially pleased with the introduction of this new method, which, in addition to neurology, means a big step forward for our Clinic for Neurosurgery. Cooperation with colleagues from KB Dubrava led by Dr. Chudy and she has been great so far. The implementation of such and similar procedures and plans for further development in the field of neurology and neurosurgery guarantee the progress of the profession and ensure the availability of our patients the most modern medical methods,” Dr. Alen Ružić said on the occasion of the first DBS procedure at KBC Rijeka.

Since the first description of Parkinson’s disease 204 years ago, with the discovery of levodopa, the introduction of DBS is the second most important event that opened new horizons of treatment and significantly improved the quality of life of patients, gives them a new chance, returns young people to work and school. The success of this method of treatment is certainly contributed by the new team collaboration of neurologists and neurosurgeons in performing the entire procedure and sharing responsibilities.