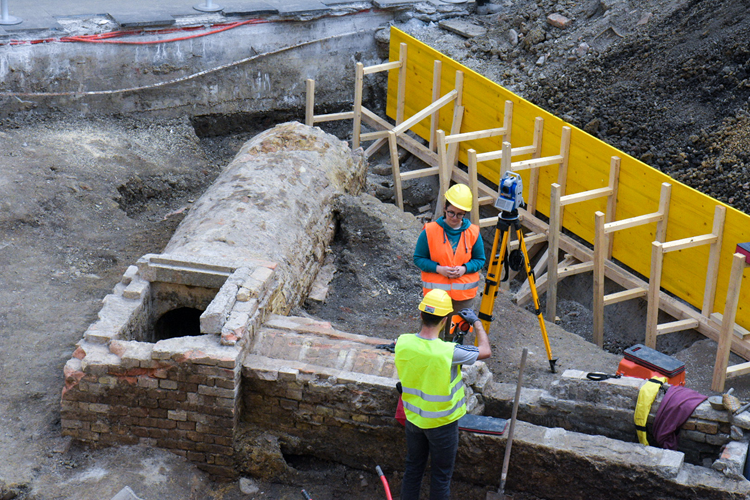 Archaeological excavations carried out by the Croatian Conservation Institute in the courtyard of Government House in Zagreb were presented to the public on Friday by Prime Minister Andrej Plenković.

The Croatian Conservation Institute is carrying out investigative work at Government House necessary for its complete reconstruction, which was damaged in the recent earthquake, the Croatian Government said.

The first phase of these works included the research of the northern part of the courtyard and the prime minister said that archaeological excavations in an area of about 500 square meters revealed the 3,000-year-old hidden history of Zagreb, which shows that there was an important centre there with the continuity of life from pre-historic to the present day.

Preliminary findings of archeological excavations were presented by the director of the Croatian Conservation Institute, Tajana Pleše.

Among the artefacts found and cleaned so far, she singled out a “boot” as the most important, an object that looks like a boot whose real function will be determined later, and which dates back to the early Bronze Age, around 1200 BC.

Artefacts dating back to the Early Iron Age, around 700-600 BC, have also been confirmed, and a fibula, or buckle, dating to the Late Iron Age, from the 2nd to the 1st century BC, has also been found, 24sata reported.

The contextualization of these findings together with the previous ones conducted by the Zagreb City Museum and the Archaeological Museum almost certainly indicates the existence of a very large serious city in prehistoric times, ie a serious dwelling that lasted almost ten centuries, said Pleše.

The leader of the research, archaeologist Petar Sekulić, explained that this is also the richest find from the Middle Ages so far. Among the findings is a coin, the so-called “banovac”, dated to 1280. Wooden traces of a 14th-century pantry with pots full of seeds were also found, and what the people of Zagreb ate at the time will be known after the analysis.

Also, among other things, a seal was found which was used to close English cloth dating from 15th-16th century, about forty sewing needles also from that time, and the money of Ferdinand II. Habsburg from 1583.

All these findings indicate the continuity of life in the last three thousand years, said Sekulić. “This shows us that the city of Zagreb is not what first comes to mind, the Golden Bull (document) and the 13th century, but that this position has been interesting to people for thousands of years and significant in a regional context,” he said.

These were unexpected but valuable archaeological findings, the prime minister said.

“We worked with experts from the Ministry of Culture and Media, conservators, restorers, staticians and others to prepare for the complete restoration of Zagreb’s oldest urban fabric and the city’s historic core,” Plenković said.

“What is particularly interesting today, and what some of you have already had the opportunity to see in the nearby courtyard, are the archaeological finds that have revealed to us the hitherto unknown history of this building,” he said.

Prime Minister Plenković said that research would continue in the southern part of the courtyard.