4 February 2020 – Zagreb has been ranked 16th on a list of Europe’s healthiest capital cities.

Treated.com have accumulated expansive data on a number of variables that relate closely to the health of those who reside in Europe’s capital cities, and ranked each city accordingly.

The variables included life expectancy, water quality, quality of life, percent of GDP allocated to healthcare, cost of fruit and vegetables, air quality, ability to walk or cycle to work and quality of green spaces.

London was ranked 13th, whilst Zagreb came in at No. 16 on the list out of 46 capitals. 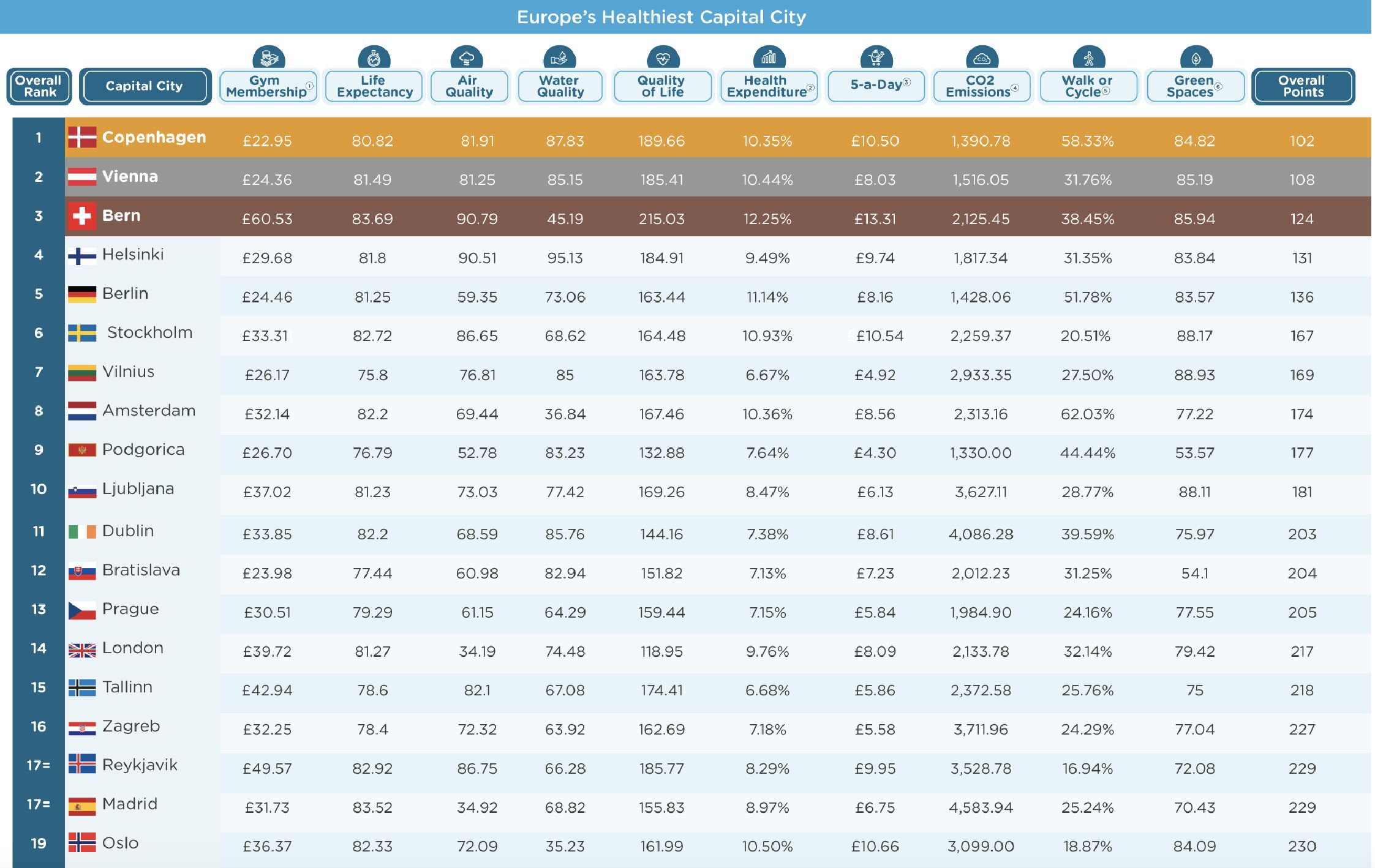 Baku in Azerbaijan ranked lowest. It scored negatively across a number of variables – including having the second-lowest quality of water, second-lowest overall quality of life and low life expectancy.

Also among the lower-ranking cities were Moscow, Bucharest, Rome and Ankara.

A total of 46 of Europe’s capital cities were ranked. Andorra (Andorra la Vella), Liechtenstein (Vaduz), Monaco (Monaco) and Vatican City (Vatican City) were precluded due to small or unreliable datasets.

We also spoke with GP clinical lead at Treated.com Dr Daniel Atkinson about the results and why this data is important. On the subject, he told us:

“Not only are these variables representative of our physical wellbeing, but they also relate to our psychological health. The quality of green spaces is a prime example of this. People need decent green spaces in their cities because they’re oxygen-rich, of benefit to the respiratory system and can be prime locations to exercise freely.

Psychologically, however, they’re also very significant – one study demonstrates this by revealing that 90% of people feel green spaces play a positive role in relation to their happiness and wellbeing.

Other variables such as the overall quality of life, quality of air, quality of water and C02 emission index all relate to our psychological health as well as physical.

But another important facet in relation to this study surrounds the ‘accessibility’ of things which are of physical benefit to us. This can include variables like the cost of a gym membership and the cost of healthy food.

However, perhaps interestingly, a lot of capital cities where these variables are expensive still rank considerably highly overall. Take Copenhagen, for example, where it’s generally very expensive to buy healthy food. It still manages to place first. There is an argument to be made about how VAT and taxes on organic produce are redistributed.

C02 emissions are also important, perhaps more particularly in capital cities where there is usually more congestion. The higher the rate of carbon dioxide, the more harmful it becomes. Specifically, over-exposure to carbon dioxide will make us feel restless, drowsy, tired, increase the heart rate and our blood pressure, make us sweat and inflict headaches.

Over-exposure to carbon dioxide over long periods of time can also contribute toward a decreased life expectancy and an increased likelihood of developing certain health conditions.

We can all do our bit to cut CO2 emissions and congestion by avoiding unnecessary car journeys. If your city has a decent public transport network, try to opt for this instead. But even better is walking or cycling wherever we can.

Walking and cycling in place of driving will help to reduce CO2, but exercise is also of benefit to our personal health – both physical and psychological – so the percentages of people walking or cycling to work has been included as its own variable in our study.

As a guide, we should aim to fulfil at least 150 minutes of moderate exercise a week – this can include walking or mowing the lawn. Alternatively, people can aim for 75 minutes a week of more rigorous exercise like jogging or cycling. This should also be spread out across the week and done in conjunction with strength exercises.

Walking or cycling to work could easily count for all the weekly exercise we need, and is environmentally friendly too.”