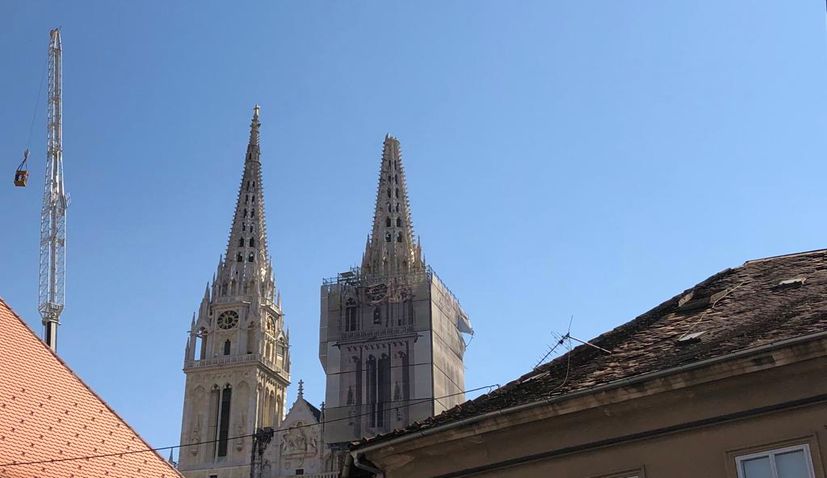 ZAGREB, 4 May 2020 – The spectacular, and extremely delicate controlled explosion to remove the top part of the north tower over a fortnight ago following the devastating earthquake, marked the end of a restoration process on Zagreb Cathedral which had lasted almost 30 years.

And now after the earthquake and removal of the spire, a new chapter of restoration, that might last for years, even decades, is set to begin.

“First we have to diagnose the state of it and then we will make the plans. We have begun setting up the caps which will be clamped on top of the towers and we will then place temporary crosses on top,” Monsignor Ivan Hren, who has been leading the renovation of the Cathedral for a number of years, told HRT.

The intensity of the impact is still visible. The next step is to set up scaffolding to ensure the statics of the cathedral. The sarcophagus of Aloysius Stepinac was protected by a wooden covering and precious stained glass windows will be taken off. Statues and heavy chandeliers were also removed from the cathedral are now situated in churches in Zaprešić, Stubičke Toplice and Sisak.

After the floor and wooden benches behind the central altar were removed, the workers were in for a big surprise as they found a renaissance gravestone dating back to 1510. A part of the same gravestone was previously found and is in a museum and now the missing part was found and can be connected.

Monsignor Hren is hoping that if the scaffolding and security measures go according to plan, then Zagreb’s trademark cathedral frequented by believers and tourists might open to the public by Statehood Day on 30 May.

Video and photo of the discovery on the following link HERE