The party in Croatia set to continue today.

The largest party Croatia has ever seen took place in the capital Zagreb yesterday as over 500,000 people welcomed home the World Cup runners-up.

Crazy scenes from Zagreb were beamed all over the world as the team made a six-hour drive from the airport to the main square where 100,000 were gathered. Players took to the stage and sung together with fans after thanking the fans for their support.

After the party on the square, the team made their way to Zagreb restaurant Okrugljak where together with their wives and partners, enjoyed a team dinner.

After a well-deserved sleep, the party continues today.

There will be homecoming parties organised on the Dalmatian coast where a number of the players hail from.

Players from Split and nearby towns will make their way to Split today for a welcome party on the Split Riva. 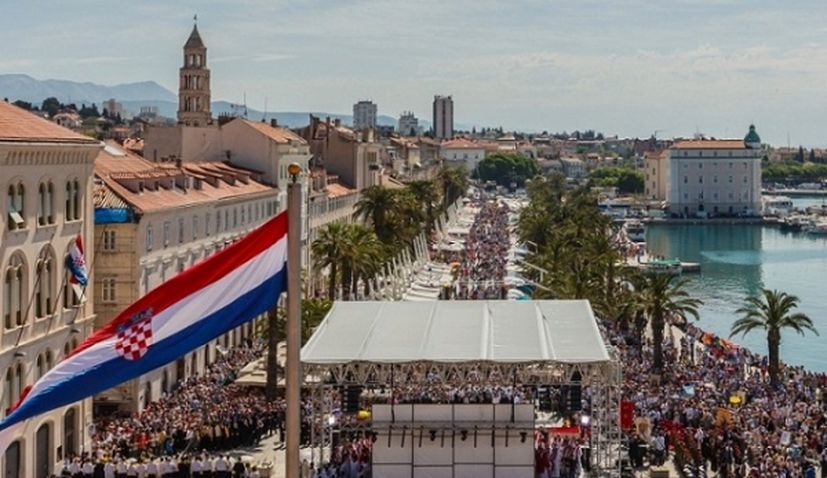 Split Riva will be packed tonight

Lovre Kalinic, Ante Rebic, Ivan Perisic, Filip Bradaric and Ivan Strinic will be in Split for the party which will start at 4 pm on the Riva, the City of Split announced.

“Come and greet our ‘Vatreni’ how Split and Dalmatia only know,” they said.

Dalmacija danas reports that Marijan Ban & Diktatori, Jole, Giuliano, Dalmatino and Mate Bulic will be singing at the party.

Meanwhile, today in Zadar thousands are expected to turn out to welcome their hometown heroes – Luka Modric, Sime Vrsaljko, Dominik Livakovic and Danijel Subasic. A special stage has been put up at Forum in Zadar for the party which starts tonight around 9 pm.

A special cake which weighs 25 kg has been made for the occasion to honour the players in Zadar, Zadarski list reports. Meanwhile, a party will be held in Varazdin tonight at 7 pm on Kapucinski square at 7 pm with Prljavo kazalište and Zaprešić Boys playing. Dalic spent a lot of his career in Varazdin.

Next week on Monday 23 July a welcome party is planned in his hometown of Livno in Bosnia and Herzegovina.
On Wednesday Omis will orgainsed a party for Perisic at 7 pm at Park Hrvatskih branitelja and a party is also planned in Donji Miholjac for Domagoja Vida and one in Slavonski Brod for Mario Mandzukic.