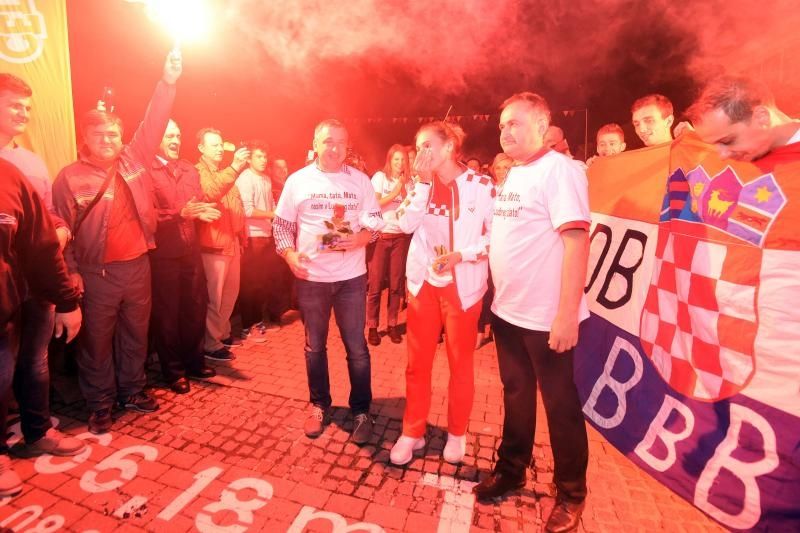 One of the real sensations of the Rio Olympics, 21-year-old Croatian javelin thrower Sara Kolak, has arrived home to a heroes welcome on Monday evening…

Kolak, who shocked many world by winning gold in the women’s javelin in Rio, landed in Zagreb on Monday before making her way to her home town of Ludbreg where thousands were on hand to welcome their new hero.

Kolak, who qualified for the final in Rio with a throw of 64.30 metres, almost 7 metres longer than her best throw before the start of this season, threw 66.18 metres to win gold from out of nowhere.

“First I want to thank each and everyone of you for coming here in large numbers. I want to thank my club for everything, the city of Rijeka, Ludbreg and the Olympic committee. I want to thank my family, for whom this gold would not have been possible without them. I have more competitions still, the season is not over for me yet. I will go celebrate and then sleep. I am still not aware what has all happened,” the gold medalist said.

Kolak’s home town of Ludbreg, which is located between Varaždin and Koprivnica, is known as the centre of the world. Ludbreg folk claim that if you were to spread a map of the world flat, then it is their town which is bang smack in the middle. Last night the mayor agreed that a town square should be named after Kolak.