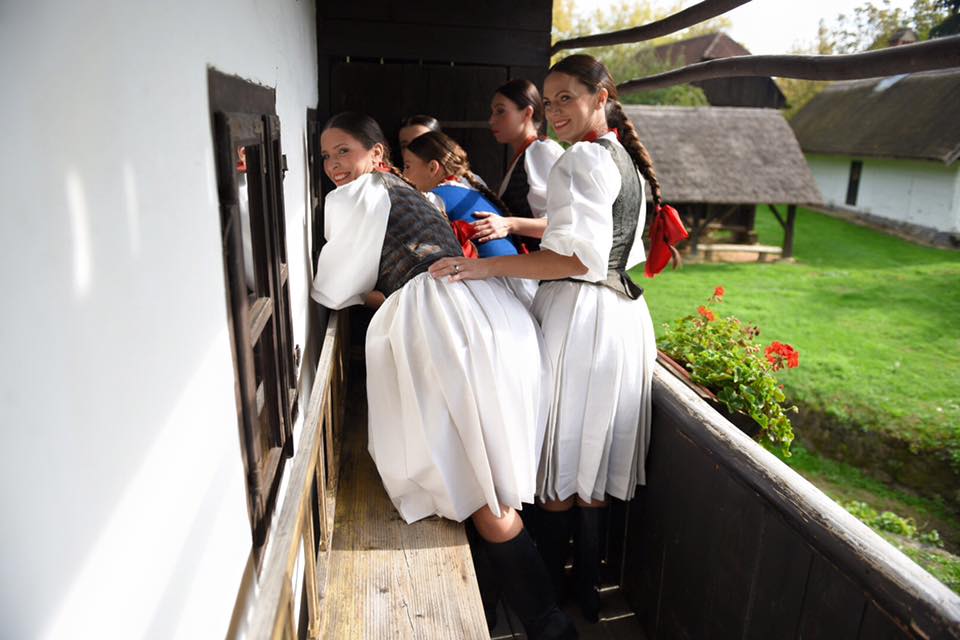 In an era where pretty much anything goes, hairstyle options today seem endless for women. The latest ‘in’ chic style seems to change faster than ever. But back in the days of our grandmothers, there were not a lot of choices.

There were hairstyles which ‘suited’ young girls, unmarried girls, married or older women, as well as those who had more money and those not so well off. There were also differences in hairstyles between girls who lived in the city and those living in the countryside. Croatia does have one detail though that connects all its regions – a braid.

Apart from the braid, each region in Croatia had its own style, technique, and form.

Croatia does have one detail that connects all Croatian regions – a braid. Still, every region has its own technique and form. Girls wore one or two simple braids, falling towards the back or front, or wrapped around the head. Usually, they would start wearing a scarf or change their hairstyle when they entered young adulthood. Especially in marriage, it was common to wear a scarf to “hide” it from everyone except the husband – an old custom which was continued for practical reasons or because the grandmothers of our grandmothers wore it. On special occasions, hair was ornamented with flowers, bands, and bows, or accordingly, with a lace scarf and every region has its own style of embroidery. The styles refer to the historical period of the 19th and the early 20th century.

The traditional hairstyle of Slavonia, Baranja and Srijem include the two smaller braids for younger girls and one broad braid for the older ones, from the age of 15. This style was also the most festive one.

According to experts in Ethno hairstyles of Croatia, the hairstyle is described like this: the hair is divided into two parts: the frontal and back part which winds into the braid, and the frontal that stays in bangs and is then straightened behind the ears or braided over a thin rope.

This hairstyle can take about 4 hours to create if one has experience and skills, but up to 10 hours for those inexperienced. Cities and villages usually had their own styles, so the back part of the hair could’ve even been divided into small locks, a hundred of them, and then made into thin braids that form one big braid. 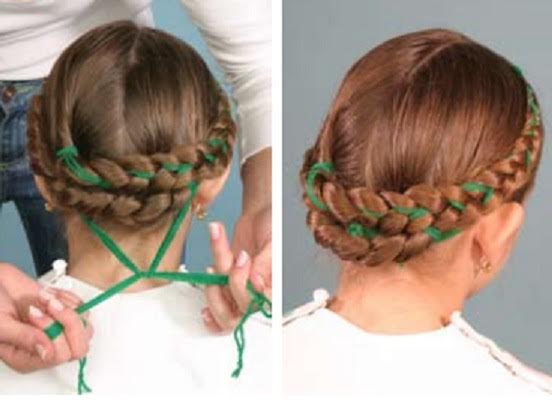 Other examples are the high braid, being buttoned up high around the back part of the head, such as ćutuk from the village Vukojevci, cop from Motičina village (five braids wrapped in circle on the nape), the braid that looks like a net could’ve been seen around Vinkovci, Vukovar, and Ilok, thin bands were worn around Đakovo and a braid similar to a garland around Vukovar. Kikaš is a traditional hairstyle unique in all of Croatia – it has bangs on the front and two braids on the back covered with a garland. The scarf or the band usually had golden coins sewed on it which are connected to the history of the Roman empire. Middle parts of Croatia have a tradition of locks or frke (winded locks sticking to the head) on the front part of the head. A sort of diadem or a scarf was added when the girls were entering the age of marriage. The colour used was red accessorized with small beams or bands. The bands were braided together with the hair locks. Pokuplje is an area where the braids were covered with small hats, red or colourful for the younger girls, and white for the older women. It was the practical style used for everyday routine. For different occasions, the other typical Croatian detail, a triangle shaped scarf, was put above it and belayed beneath the chin. In the end, the scarf and the hair would form a two-horn hairstyle. Posavina has the tradition of making two braids with bows and then twisted into one and covered with a small hat.

In Hrvatsko Zagorje, younger girls would wear two braids, each having its own bow and made to fall forwards, not backward like in some other regions. The older women, which is also a tradition in Slavonia, would make their long hair into simple buns or braids buttoned around the head and cover them with scarves, also belayed underneath the chin.

The coastal part of Croatia also has its own similarities. The braids were tangled into a garland around the head with variations of red or white bands between the braids and locks.

Istria was the part of the coast where the hair was braided together with a band and then wrapped around the head. It was also sometimes covered with a small scarf made into a triangle shape and belayed on the back part of the head. It was ornamented with flowers and white lace. 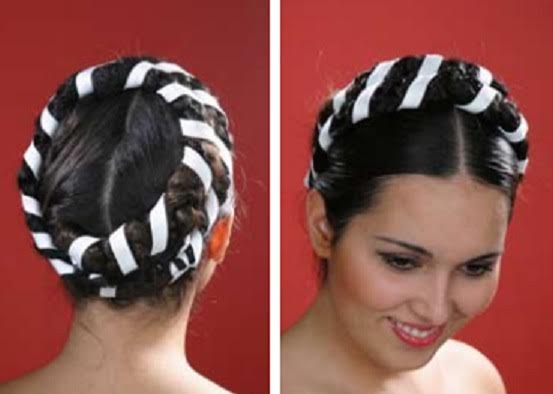 Longer, squared swathe wrapped in different ways was worn on the head on the island of Krk. The white edge was decorated with stripes, colourful, brown or yellow which varied depending on the purpose.

The decorative needles were used on the white scarves whose ends were folded over the forehead for the women of the island of Pag. The mandatory Pag lace is the other ornament sewed on the edges of the scarves. Later, in the middle of the 20th century, the today form of a triangle was given to this traditional hairstyle. 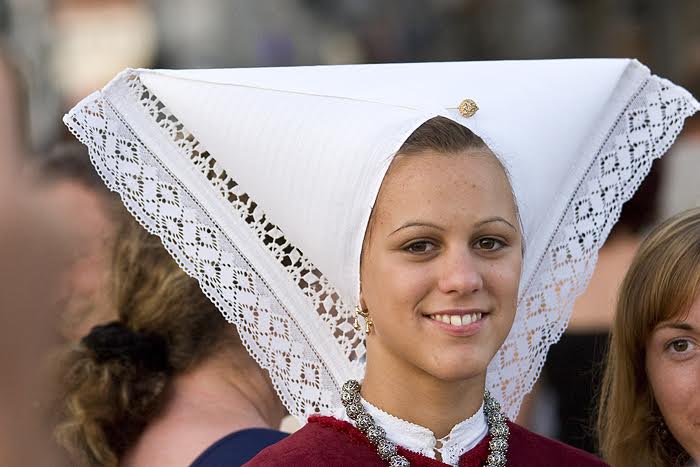 Hairstyles in Pelješac consists of two braids made of three strands into which a broad band (kurdela) is tangled and bent over on the sides into two braided buns.

The characteristic hairstyle of the island of Susak is also unique. Hair is combed and divided and the two frontal locks stay beside the face while the rest is braided into a “cake form”, the so-called kokum, and is usually covered with a scarf in red or darker colours. 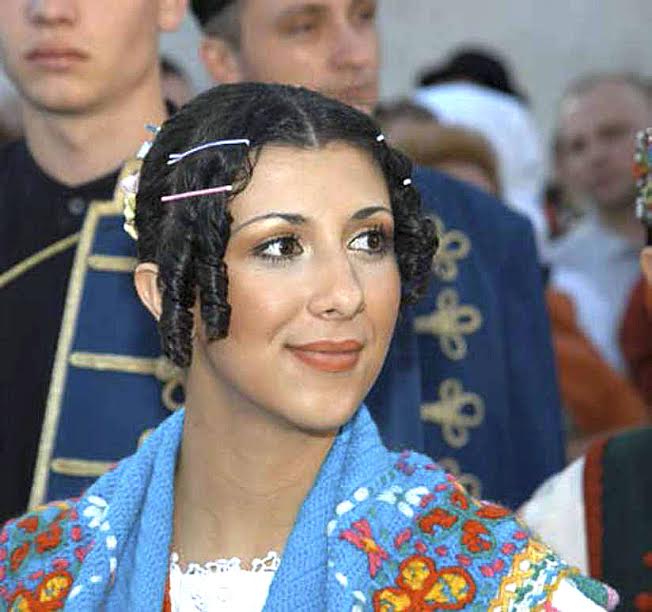 So next time you are looking for a hairstyle change, why not go traditional Croatian.