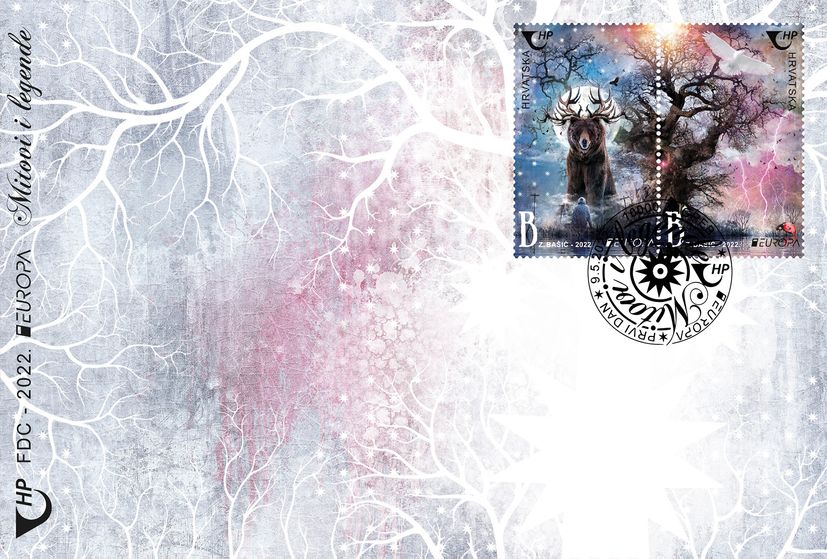 ZAGREB, 6 May 2022 – On May 9, 2022, Croatian Post will release new commemorative postage stamps from this year’s “Europe” series on a common theme of stories and myths.

This is a publication within PostEuropa, the association of postal operators of European countries, which is published by PostEuropa members every year.

The motif on the new Croatian stamps is the mythological Tree of the World – Drvo svijeta – from the Old Croatian myth about the structure of the universe, and the author of the stamps is Zdenko Bašić, a multimedia artist, author and illustrator from Zagreb. 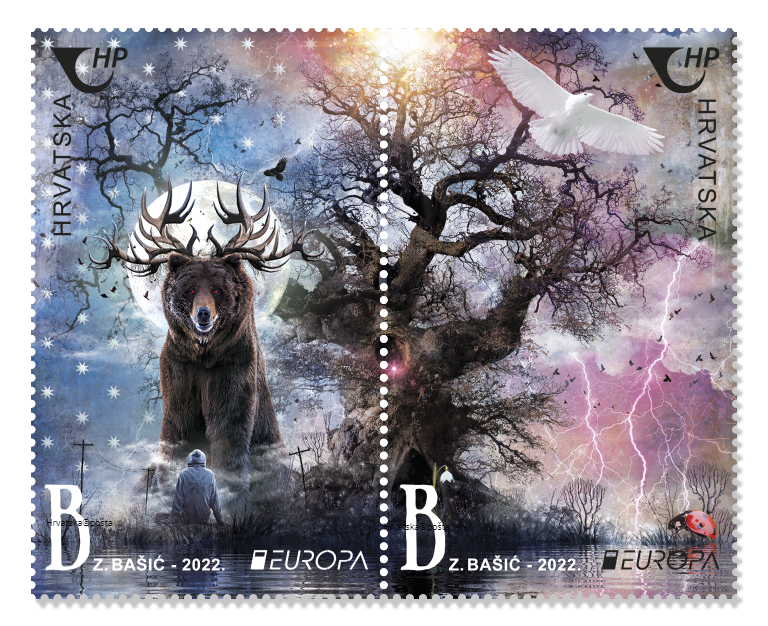 Old Croatian mythology is a unique combination of Slavic beliefs that were assimilated with the indigenous Roman and pre-Roman peoples in this area.

Our ancient ancestors experienced the universe which they observed by dividing into two basic elements according to which they divided everything that exists: heaven and earth, up and down, light and darkness.

The link between heaven and earth was the vast Tree of the World as the axis that held everything together: the stars, the planets, the clouds and the winds, but also everything else underground, in the bowels of the world.

This tree is most often mentioned as a giant oak, which is also the most valued in these parts when it comes to trees.

On the branches of the Tree of the World sit celestial creatures and gods, and on the very top the celestial Perun, lord of lightning and time.

He is the ancient righteous to whom all the birds, the stars, the sky, and all the air belonged. He often appeared in the form of a great eagle or hawk, and his kingdom at the top of the Tree of the World is called Prav.

On the other hand, the roots of the Tree of the World reach deep into the underworld where it holds the earth together, but also the water hidden under its roots, which keeps it alive.

There, at the bottom, sits the dark lord of the underworld and water: Veles – Perun’s brother. He rules the world of the dead, spirits and darkness, but also three kinds of treasure: the secular – monetary, treasure in the form of cattle, but also treasure that is wisdom and knowledge. He is often described as a horned dragon or a bear. His kingdom under the earth is called Viraj.

And although the two of them are often in divine strife and rivalry, opposing their powers and strength over one another, all living things that grow on the surface and under the canopy of the Tree of the World, including us humans, depend on both of them and their balance. The world of people and animals at the foot of the Tree of the World of People was named Jav.

The sun is the third element of life in that ancient picture of the universe. It orbits the World Tree for a year in its cycle, staying for six months in its canopy with the celestial Perun, and in the second half of the year it descends and passes through Veles’ underground world where it is purified in its water so that in the spring a new and renewed can be born again.

Thus this old myth describes the cycles of the seasons through one solar year.