Perković, who won Gold at the Rio Olympics this summer to back up her Gold four years earlier in London, was one of 10 women nominees who were selected by an international panel of athletics experts, comprising representatives from all six continental areas of the IAAF.

Perković has had a fantastic 2016, becoming the first to win 5 Diamond League meetings in row. She also this year became the first female athlete to win four back-to-back European titles. Twice this season she threw over 70 metres (70.88 in Shanghai & 70.59 in Split). 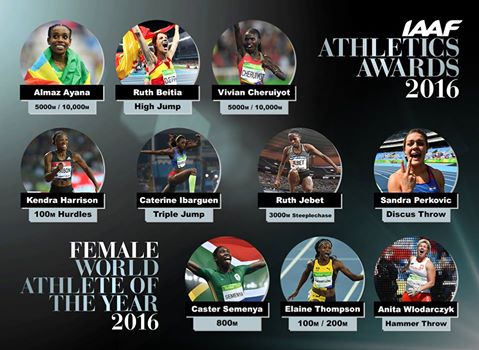 The nominees for 2016 World Athlete of the Year are:

A three-way voting process will determine the finalists. The IAAF Council and the IAAF Family will cast their votes by email, while fans can vote online via the IAAF’s social media platforms. Individual graphics for each nominee will be posted on Facebook and Twitter later this week; a ‘like’ or ‘favourite’ will count as one vote.

The IAAF Council’s vote will count for 50% of the result, while the IAAF Family’s votes and the public votes will each count for 25% of the final result. Voting closes on 1 November. At the conclusion of the voting process, three men and three women finalists will be announced by the IAAF.

The IAAF Awards Night will be held in Monaco on Friday 2 December 2016.