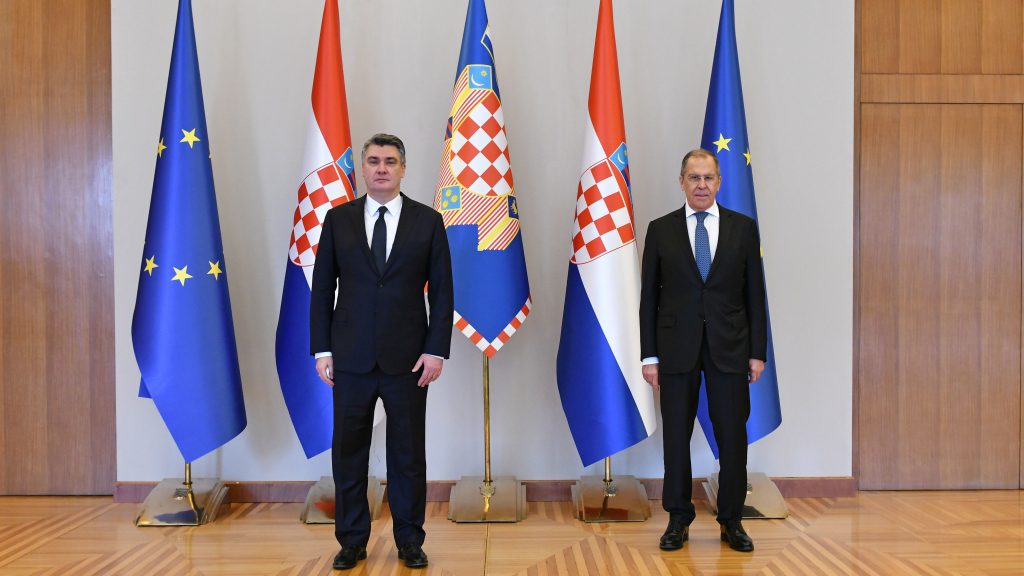 (Photo: Office of the President of the Republic of Croatia / Marko Beljan)

They discussed political and economic relations between Croatia and Russia and the situation in Southeast Europe.

They also talked about the possibilities of improving Russia’s relations with the European Union, of which Croatia is a member, the press release said.

Lavrov last visited Croatia 16 years ago and the latest visit occurred after being postponed twice due to the COVID-19 pandemic.

Russia has good relations with Croatia, Lavrov said earlier on Wednesday after talks with his Croatian counterpart Gordan Grlic Radman, and dismissed Western and U.S. accusations of Moscow, saying they were contrary to ethical and international norms. 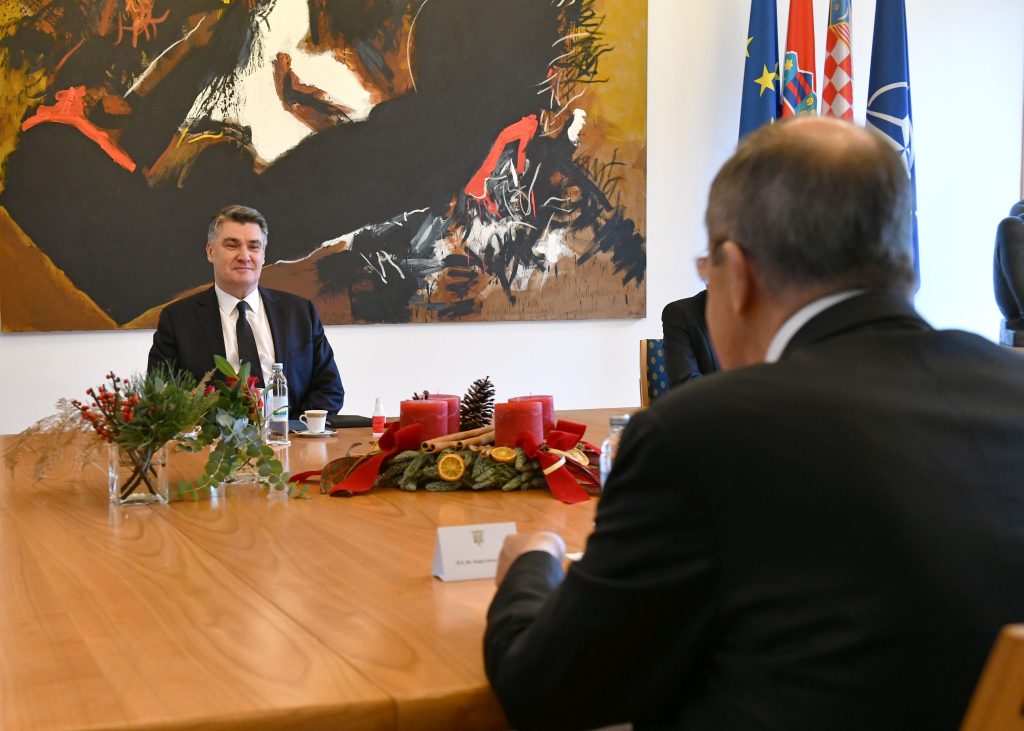 (Photo: Office of the President of the Republic of Croatia / Marko Beljan)

Grlic Radman called it an “incentive to continue the positive trend” in the relations between the two countries.

“Despite the current challenges,” Grlic Radman said they talked about “possibilities of intensifying cooperation between the EU and the Russian Federation. Communication channels should stay open.”

Lavrov arrived in Croatia on a tour which included Bosnia and Herzegovina and Serbia. Two members of the BiH Presidency refused to receive him, dissatisfied with his stand on BiH’s NATO and EU integration and the Dayton Accords.

In Zagreb, Lavrov reiterated that Moscow was strongly committed to honouring the peace agreement. “We have a common uniform stand” on the respect for the equality of the three constituent peoples, he said.

Speaking of changing the Electoral Law, which Croats in BiH demand, Lavrov said BiH should decide on its political goals on its own.

In that sense, it is also necessary to respect the stands of BiH’s Serb entity, he said. “That means also respecting Republika Srpska’s positions on military neutrality.” 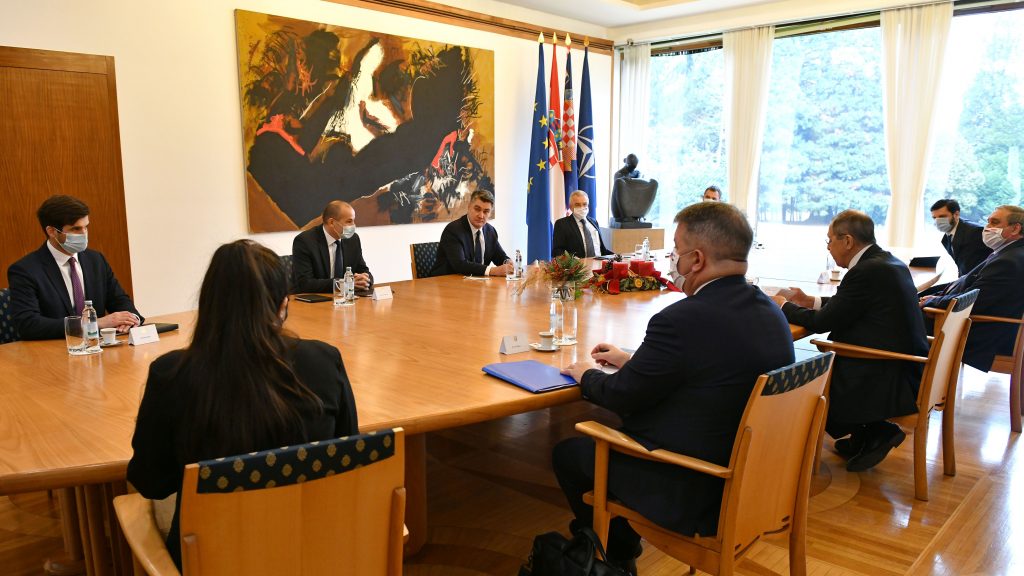 Photo: Office of the President of the Republic of Croatia / Marko Beljan)

Moscow is against revising the Dayton Accords, Lavrov said in Sarajevo on the 25th anniversary of the agreement which ended the war in BiH, but the general assessment today was that Moscow demands an upgrade so that BiH can become a functioning and progressive state.

In Sarajevo, Lavrov also called for closing the Office of the High Representative, saying that BiH does not need an “international protectorate”. He also supported Republika Srpska’s stand on “military neutrality” and accused NATO of undermining international stability.

Because of those statements, BiH Presidency members Sefik Dzaferovic and Zeljko Komsic refused to receive him, accusing Russia of opposing BiH’s strategic goals to join NATO and the EU. They said they did not want to be Russia’s pawn in the Balkans in its score-settling with EU member states or NATO.

A day later in Belgrade, Lavrov said Dzaferovic and Komsic were not deciding autonomously but defending on others’ orders the interests of outside forces not interested in Western Balkan countries building “mutually beneficial cooperation with all external partners.”

In Zagreb, Lavrov said Moscow was used to constant accusations by Western countries and the U.S.

On Tuesday, U.S. Secretary of State Mike Pompeo said “Russia continues to threaten the stability of the Mediterranean” and “spread chaos” among countries in the region.

The U.S. is trying to undermine Orthodoxy, including in Ukraine, said Lavrov.

Asked when President Vladimir Putin would visit Croatia, he said it would occur when conditions allowed.

Lavrov also met with Prime Minister Andrej Plenkovic and is scheduled to attend the inauguration of a new Russian Embassy building.

Mutual cooperation, the Ministry said, encompasses a wide range of activities related to museums, galleries, performing arts, literature and publishing, as well as the existing high level of cooperation in the area of audiovisual activities.

The Ministry recalled that in the domain of cultural heritage the cooperation was especially pronounced between the Underwater Research Centre of the Russian Geographical Society, the Lomonosov Moscow State University Marine Research Centre and the International Centre for Underwater Archaeology in Zadar, a UNESCO Category II Centre.

Signing the Programme will improve, the Ministry said, the existing cooperation between organisations, artists and experts.

In addition to a good and meaningful bilateral cooperation between the two countries, which is achieved through direct contact between cultural institutions and artists working in Croatia and Russia, the cooperation within international platforms will also continue, the Ministry of Culture and Media said.