In the spring of 1945, the Independent State of Croatia, only four years after its proclamation, was on the verge of disintegration. Yugoslav Partisans were advancing towards its capital Zagreb. At the beginning of May, the army began to withdraw, and with them part of the civilians, including women and children.

Most Croatian refugees hoped to find salvation in surrender to Allies. This was followed by disappointment when the British handed over the soldiers to the Partisans near Bleiburg, Austria. Women and children and some male civilians were not handed over to the new Yugoslav authorities. The International Refugee Organization took care of them by placing them in refugee camps.

After a short stay in Austria, Croatian refugees were sent to Italy in cattle trains. Conditions were inhumane and some of the refugees, especially children, died on the way to the camp. Most came to the camp in Fermo on 15 August in 1945.

In May 2018, a business trip took me to Piano de Montegiorgio in the Italian province of Marche. Knowing that Fermo was nearby I decided to research where the camp itself was located. I expected that in its place today there would be a parking lot or a shopping centre, as in the place of the former camp in Zagreb, there is a bus station today.

I was surprised when I found out that the camp was preserved and that it was located about ten kilometres from the hotel. I decided to visit the former camp and photograph it from the outside as the door in all the pictures on the internet was closed with a no entry sign. The camp was located in what is now Molini di Tenna. The address of the camp is Via della Constituenti. On the navigation systems one can find as Campi di Prigionia PG 70, and if you get lost you have to ask where the ex-conceria (former tannery) is. The nearby river Tenna often almost dries up as early as spring. So it was already in May at the time of my visit.

In the immediate vicinity there is a cafe, private houses, a car dump and a newly built church. Parking in a side street, I headed to the entrance and to my great surprise the front door was open. The location was surrounded by a brick wall, which is completely preserved today. The camp is entered through a concrete arch about five meters long, at the beginning of which there is still a fence.

Despite the big sign forbidding unauthorized persons to enter, I could not resist and entered the area of ​​the former camp. At the entrance there are two administrative buildings where English soldiers and Red Cross employees stayed. After entering the camp area, the first thing that can be noticed is a stone sculpture of an eagle about one meter high. The statue was erected before the war when the tannery opened in 1938. 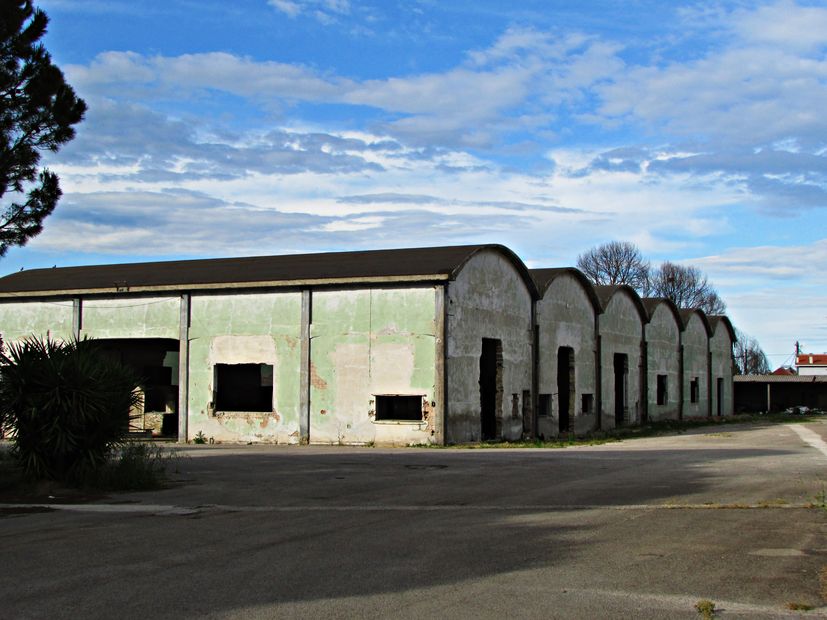 In 1938, a tannery was opened. It did not retain its original purpose for long because during World War II the area became a prisoner of war camp named PG70 (Campo di Prigionia 70). The camp housed mostly Englishmen, New Zealanders and South Africans captured by the Germans on the African battlefield in Libya and Egypt.

In the fall of 1942, 1,374 prisoners lived there. After the war, when the Croats came, the camp was called DP Camp No. 8. (Displaced person’s camp nr.8). Although they were refugees, the camp was guarded by English soldiers in the presence of the Red Cross. Men were separated from women and children. Each hangar had its own elder, and the self-government of the camp was also elected. The community developed a cultural and craft life. Clothing and cigarettes were produced for their own needs. Football club Croatia played against local Italian clubs, and the newspapers recorded that they also beat Lazio, which is especially significant because this club was the champion of Italy in 1942.

The hangars where the refugees were housed are still standing but damaged. In 2016, Giulio Vesprini painted murals of flowers called Cerchio G21 on one of the hangars in memory of Anglo-American prisoners who were there during World War. The author’s interpretation of the mural is that the poppy flower as a new life sprouts where despair and sorrow once reigned. On about twenty thousand square meters there are about twenty hangars. The entire area is dominated by a water tower. 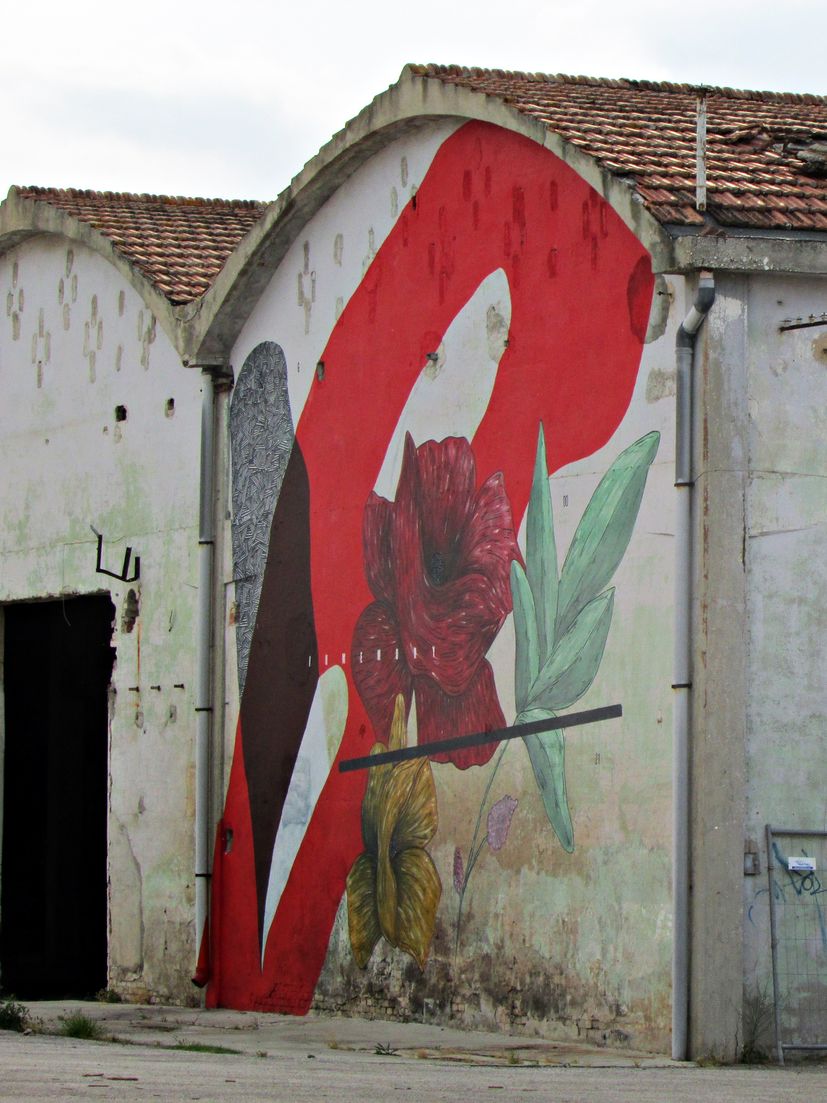 After the war, the space was used again for production purposes. The tannery reopened in 1956 under the name Sacomar. It worked successfully for almost fifty years until 2003 when it closed for the second time. Since then, the space has gaped empty. Two years ago, the area of ​​huge empty hangars served as a warehouse for earthquake-affected areas in central Italy. At the end of 2017, Casa Comune launched the Oltre Conceria project, which would revitalize the abandoned buildings of the former tannery. The plan is to turn the hangars into craft workshops for building wooden houses, rope production, industrial waste recycling and a range of other activities.

Hangar number zero, which served as a chapel for Croatian refugees, will not be revitalized for production purposes. A project was made to make this hangar a museum of memories of former detainees. There is an interesting fresco on the wall of former chapel which the Italians call Madonna Croata. 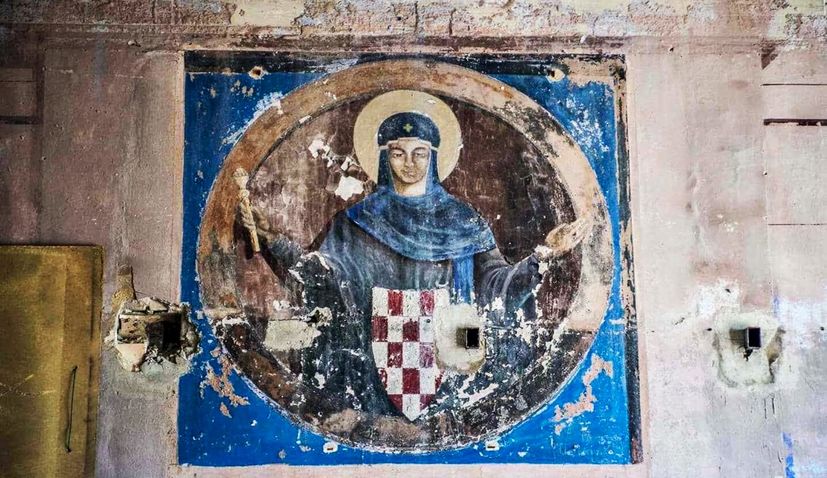 The fresco was badly damaged, after the restoration of production in 1956. Alterations were made to the building and iron pipes were pierced through the painting itself. The fresco is 1.5X1.5 meters in size. Our Lady holds a scepter in her right hand, a symbol of royal authority, while her other hand is outstretched. She is clad in a blue cloak with a gold border on which is a gold cross on her head. Above the head is a halo of holiness. The dress is slightly darker blue than the veil. There is a slightly darker sun in the background. The background of the image is blue. The gaze is directed towards the Croatian coat of arms, which is in front of the shield-shaped figure. Considering the composition of the painting, it resembles the depictions of the Intercession of the Theotokos in Byzantine art.

Below the picture was the inscription Ave advocata Croatiae fidelissima, which means Hello, the most loyal lawyer / advocate of Croats. The very name of the picture in the camp in Fermo was Kraljica Hrvata (Queen of Croats) as we see in the album of the camp Fermo. The painting was painted by Ante Turza (the mistaken surname Turzan appears in the literature) who later moved to Argentina.

The fresco of the Queen of Croats or Madonna Croata as the Italians call it today is the only reminder of the former Croatian camp Fermo. The spiritual needs of the refugees were taken care of by a young priest Viktor Vincens born in Levanjski Varoš near Đakovo. As early as 1947, Croatian refugees left the camp and emigrated mostly to Argentina, the United States, Australia and Canada.

In a conversation with the local Italians, I learned that the former Croatian camp in Fermo is not a well-known fact to the local population. The two Italians I spoke to were from the surrounding villages, but the camp was no secret and was located in the village itself. The first Italian was surprised at my mention of the camp because his grandfather told him about its existence. According to him, his grandfather was quite silly, but the Italian was delighted that his grandfather told him the truth. Another Italian was convinced that refugees were Italians, Esuls who had fled Yugoslavia.  The reason for this ignorance of the locals is the long-standing neglect of this historic place.

While former Anglo-American prisoners and their descendants visited the place of suffering and left wreaths, the Croatians stay in the camp was not celebrated. In January 2018, city officials laid wreaths in front of the aforementioned floral mural in memory of Anglo-American prisoners. The collective memory of the inhabitants nurtures the memory of British prisoners while Croatian refugees aren’t mentioned. For forty-five years, the Yugoslav authorities had no interest in marking and the historical significance of the place where the refugees of the defeated side resided. The neglect of this historical place continued with the independence of Croatia.

A memorial plaque should be erected in the former Croatian camp, which would permanently remind of the four-year stay of Croats. The fresco of the Queen of Croats is a part of Croatian history, so the Croatian embassy in Italy and the competent institutions in the Republic of Croatia should send a letter to the municipal authorities in Fermo to preserve this fresco in the future museum of remembrance. Its restoration would be desirable. Croats can pray here in front of the picture of the Queen of Croats who was influenced by the greatest troubles, even those in the Fermo camp.