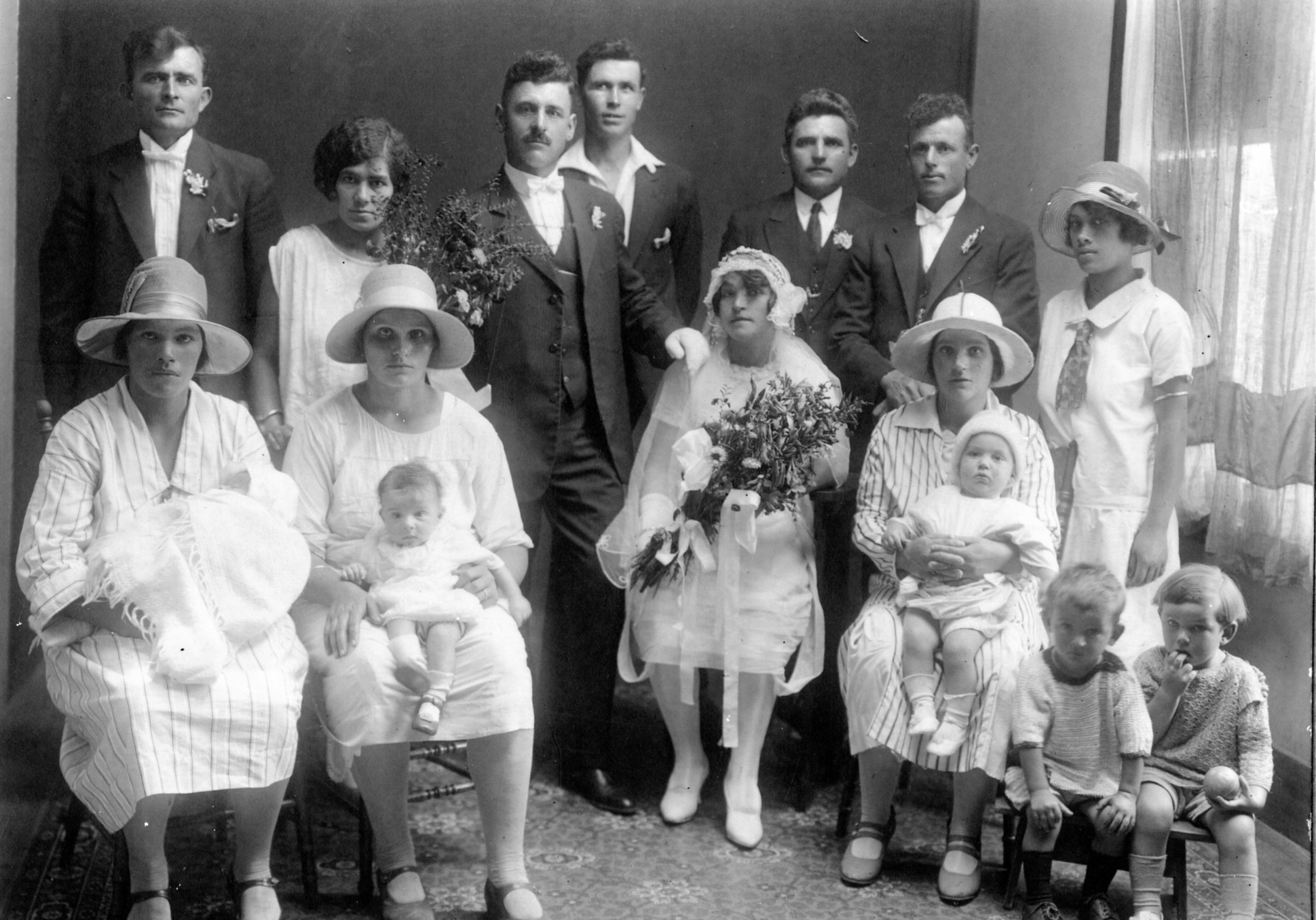 Historian and author Kaye Dragicevich has extensively researched the far north of New Zealand, the area where a large number of pioneering families came from Croatia in search of a better life over 100 years ago.

One of the more interesting stories in the book is about the Čović (later changed to Covich) family.

Nikola (Nicholas) Čović was born on 6 December 1887 in Tučepi on the Dalmatian coast. He was the son of Božo Čović and Anna nee Pašalić. In 1903 the Covich family were facing hard times, parents and children were hungry, they never had enough to eat. Before he turned 17, Nicholas migrated to New Zealand, he had heard others had done well there, and he would be able to send money home to help his family.

Nicholas as he became known, went first to Parengarenga gum digging. From there he went to Awanui, digging on a gumfield leased by storekeeper George Scansie. He was there for six years, then went to Manurewa working as a farm labourer.

In 1914 he returned to Awanui and settled at Vitle’s Lake, (now called Lake Rotoroa). Nicholas began storekeeping and buying gum on behalf of various Auckland companies. He had very little formal education, with only a short time at school to learn the basics of reading and writing. However, he became a man with extraordinary skills who completed some remarkable engineering works. 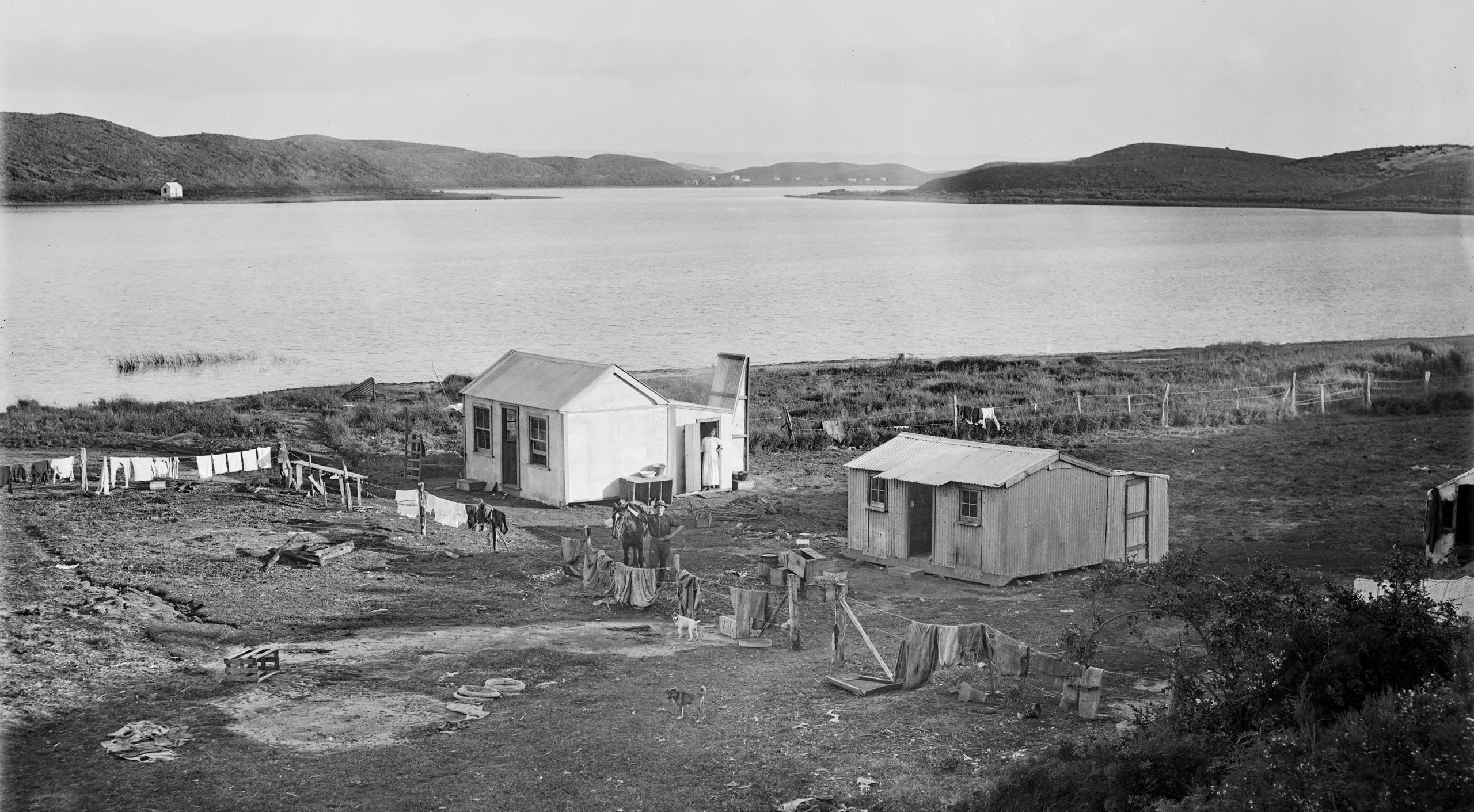 1914 Lake Rotoroa. The home of Nicholas and Polly Covich.

On 6 November 1915, Nicholas married Anataia Pare (Polly) Peri from Pawarenga. Polly was the daughter of Hepara Peri Te Huhu and Raiha Hepara Peri (nee Waipouri). Her grandfather, Kaperiere (Peri) Te Huhu, was instrumental in the building of St Gabriel’s Church, Pawarenga. “Kaperiere” is the Maori translation of “Gabriel” – hence the church was named after his patron saint. Polly’s father was one of the builders.

Nicholas and Polly had 14 children – Nicholas (Eku), Sarah, Anne, Andrew, Charlotte, Robert, Dorothy, Mary, Phoebe, Rose, Ivan, George, Fred, and Melva. When the Kauri Gum Digging Commission was established by the Government in 1914, Nicholas stated he was a gum buyer at Lake Rotoroa. In 1917, shortly before Anne was born, the family moved to Sweetwater, bringing their cookhouse and two bedroom cottage, on skids, to below Jurlina’s on Kunicich Road. 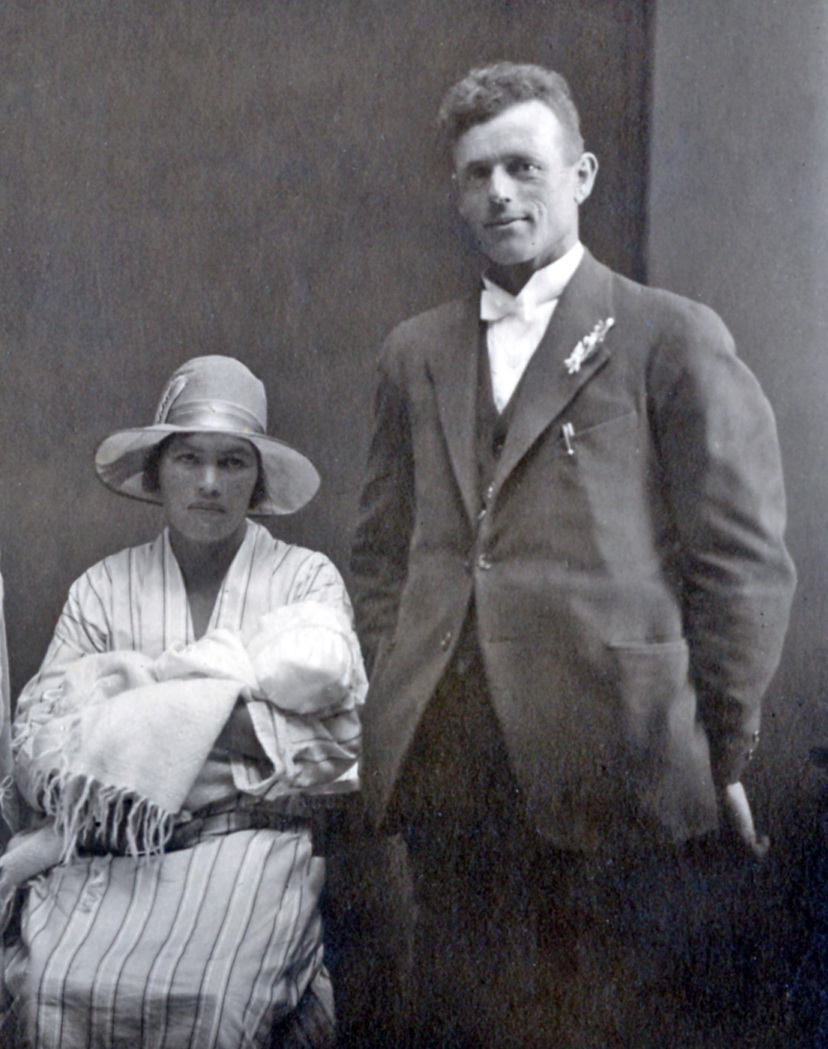 By 1925 gum prices were good and Nicholas was doing pretty well. He bought a Studebaker car, the first car in the settlement. He arranged fares to bring his younger sister Ivka, and brother Luka out to New Zealand. (Ivka married Josip Erceg in 1927, and Luka married Tonka Jurlina in 1928.)

In 1928 the family moved from Sweetwater to Ahipara Hill. They established a store selling food, clothing, and gum digging equipment. Polly ran the store while Nicholas continued with gum digging. At this time Ahipara Hill was considered one of the richest fields, for the quality of gum obtained.

Many hundreds of years earlier large kauri trees had grown on the plateau, but now it was a wasteland of manuka, kauri stumps and roots, gorse and rushes. The tableland was 2000 feet above sea level and the only access was via a steep walking track. Nicholas had to leave the Studebaker at the bottom of the hill parked in front a boarding house, and walk up the track.

A road was much needed up the steep mountainside so they could access the area by truck to bring in supplies and take gum out. Tony Yelash and Nicholas Covich organised the road building programme. They held dances to raise funds. Hard work followed – in 33 days at the end of 1928, 25 diggers had created three and a half miles of clay road with picks and shovels. The new road opened up access to the rich gumfield. Once the road was in, Tom Houston, the storekeeper from Ahipara, made regular meat deliveries to the gumfield. 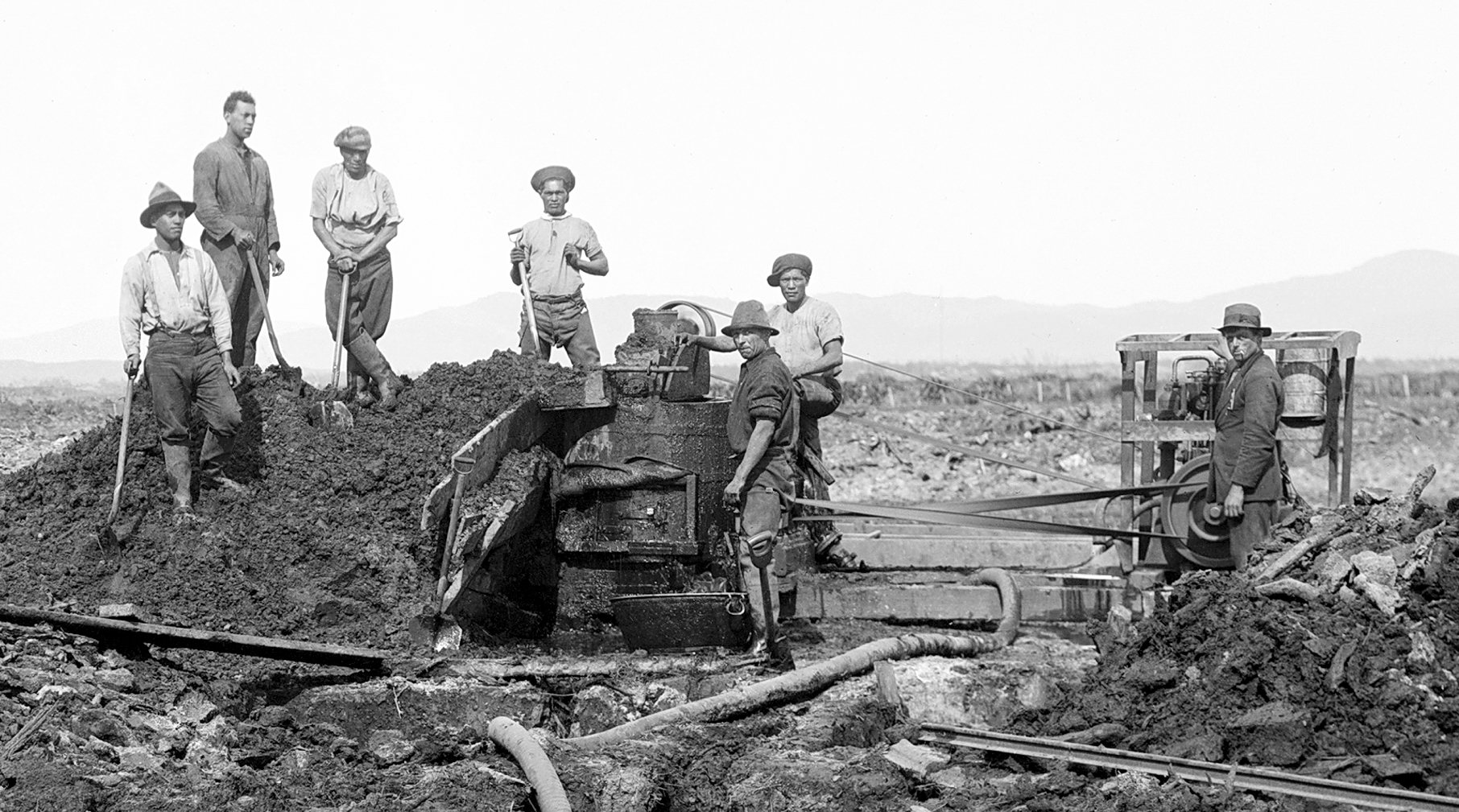 Nicholas built a large shed for storing gum. It was also used for socials and dances. Polly played the squeeze box while others played violins. By 1930 Nicholas had two cars, two trucks, a gum washing plant and tools on the hill. He arranged with Maori owners of Koroki, three miles from Covich’s, to tap into their water source. Initially, the other diggers did not wish to share in the enterprise. So Nicholas and his workers dug water channels and aqueducts over gullies, through tunnels and around hillsides to maintain a fall into a dam.

They built two dams near the house for washing gum. The children were able to swim there when they wanted to bathe. Nicholas made a type of lock gate system to stop the flow. When their neighbours saw how effectively the system worked, they wanted to join in the scheme. Eventually it became the local water supply. Also, in 1930, Nicholas purchased 104 acres of land for £1,200 nearby at Wainui Junction.

By 1933 the Depression was biting hard. Gum prices dropped to an all-time low and there was no living to be made from gum. Polly closed the store and the family moved down to the farm to live. 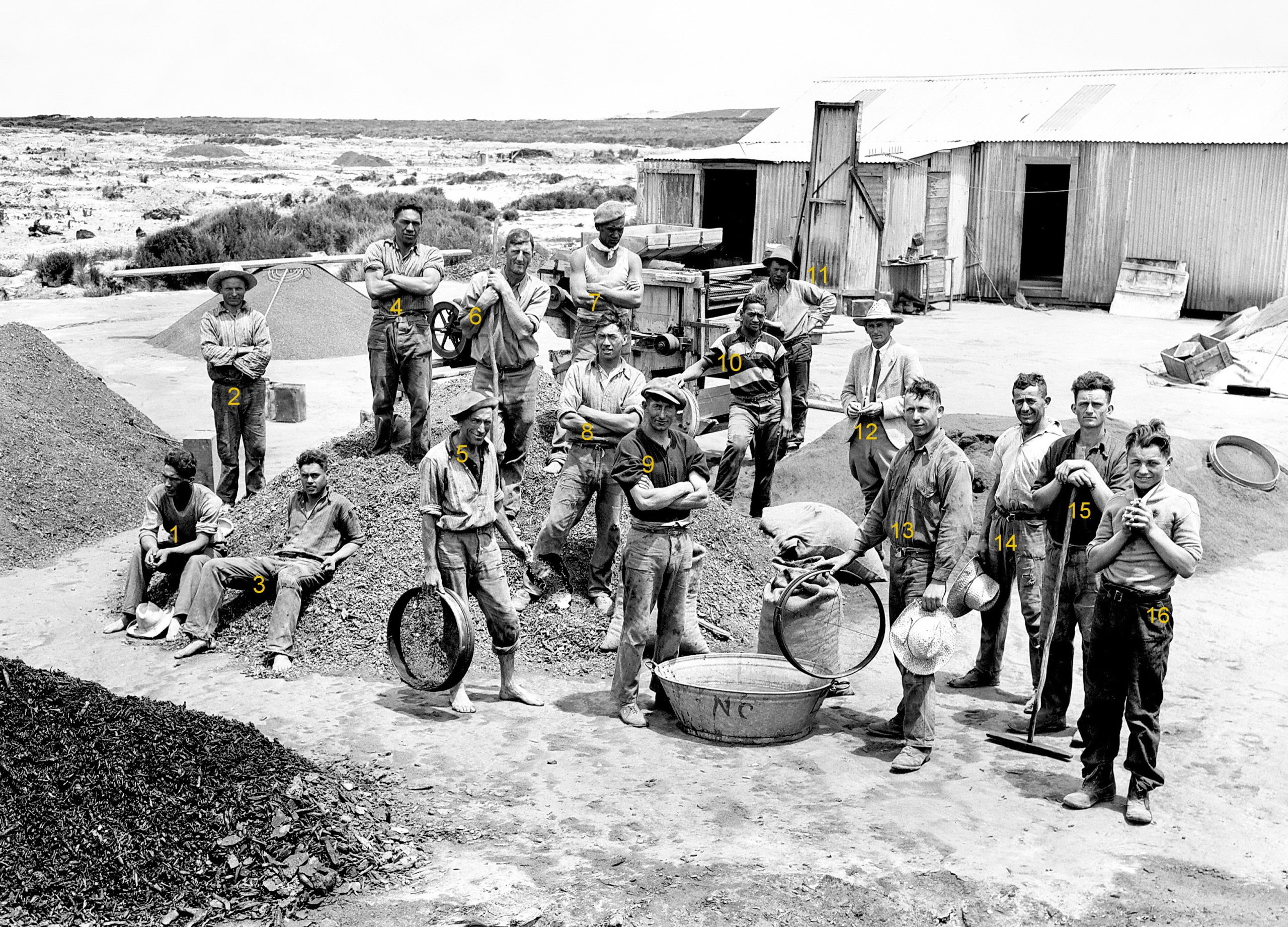 Life was incredibly difficult during the slump, Nicholas and his older boys worked in many different jobs just to keep food on the table. They worked for farmers in exchange for meat, walking to work as benzene was an unaffordable luxury. Polly and the children milked cows and ran the farm. They grew large vegetable gardens, caught fish and dug toheroas from Ninety Mile Beach. Waru Nathan worked for his keep and a few shillings of pocket money; he became part of the family.

In 1934 Tony Petrie employed Nicholas to dig drains with a mechanical digger called a Bay City Excavator at Tomorata. He worked for Tony for two to three years for a remuneration of £4 a week. At about this time Edward Hokai, Andrew Grbic, Dick Petricevich, Tony Grubisa, Tom Franicevich and a man called Posa were employed on the farm. Each received 10 shillings a week from the Government and Nicholas and Polly kept them in food and lodging.

In 1937 Nicholas, Eku, Andrew Grbic and Edward Hokai went back to Ahipara Hill. They prepared some gum soil for sluicing and were going to arrange for Mate Urlich who had a washing machine to wash it. Nicholas wrote in his diary, that he told Eku “I think we can do it ourselves. We have a tractor, a pump, hoses and everything. We need to put things together.” It took them 2 to 3 days to put the plant together and with a pressurised tractor pump they started work. 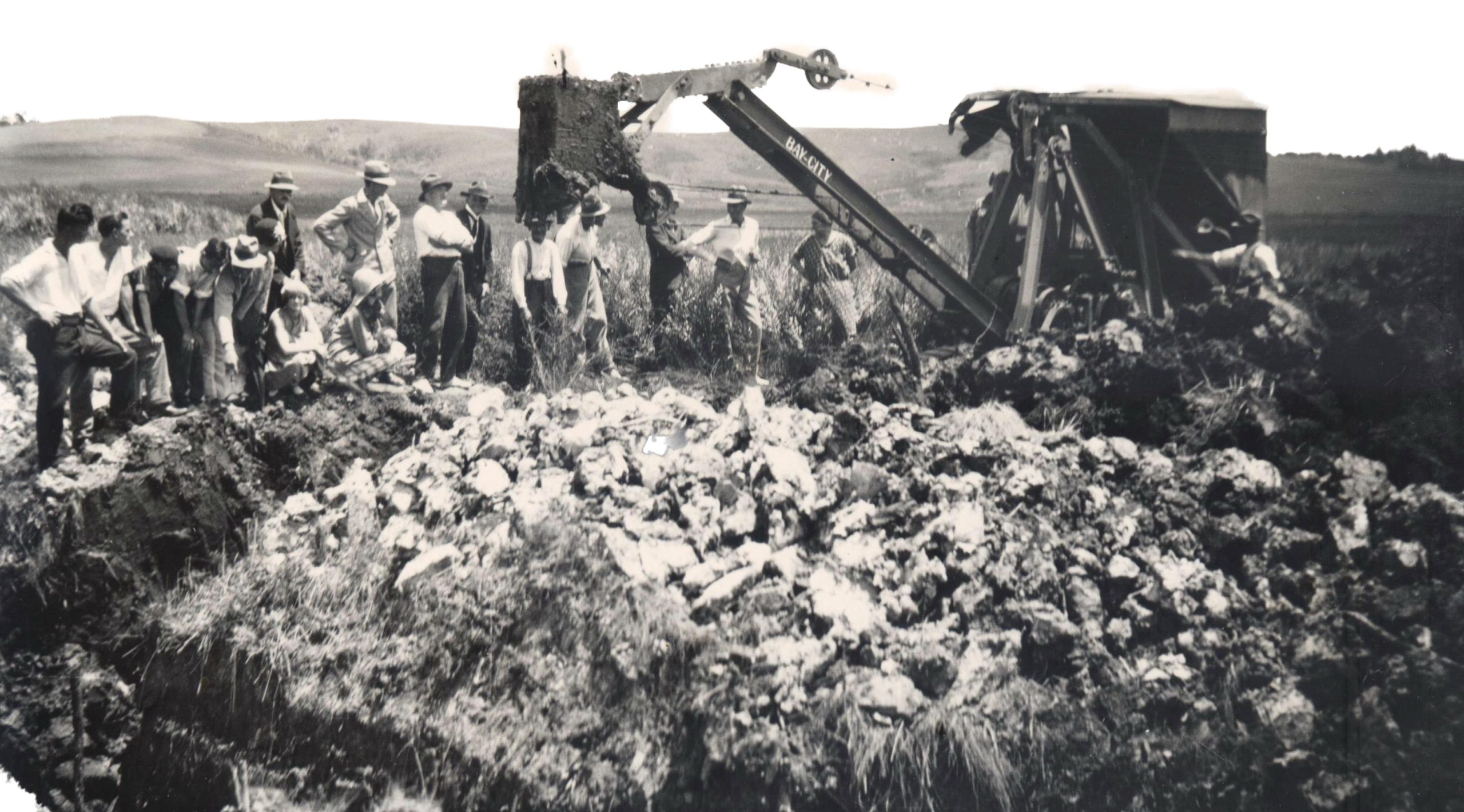 Nicholas said “There was great excitement when we started sluicing. I wanted a sluicing plant that much, I was so happy I grew a foot taller, through happiness.” Many gum diggers came to watch just how simple and easy the work had become with just three men instead of the usual 15 to do the same job. It was not hard work when undertaken on their machine. 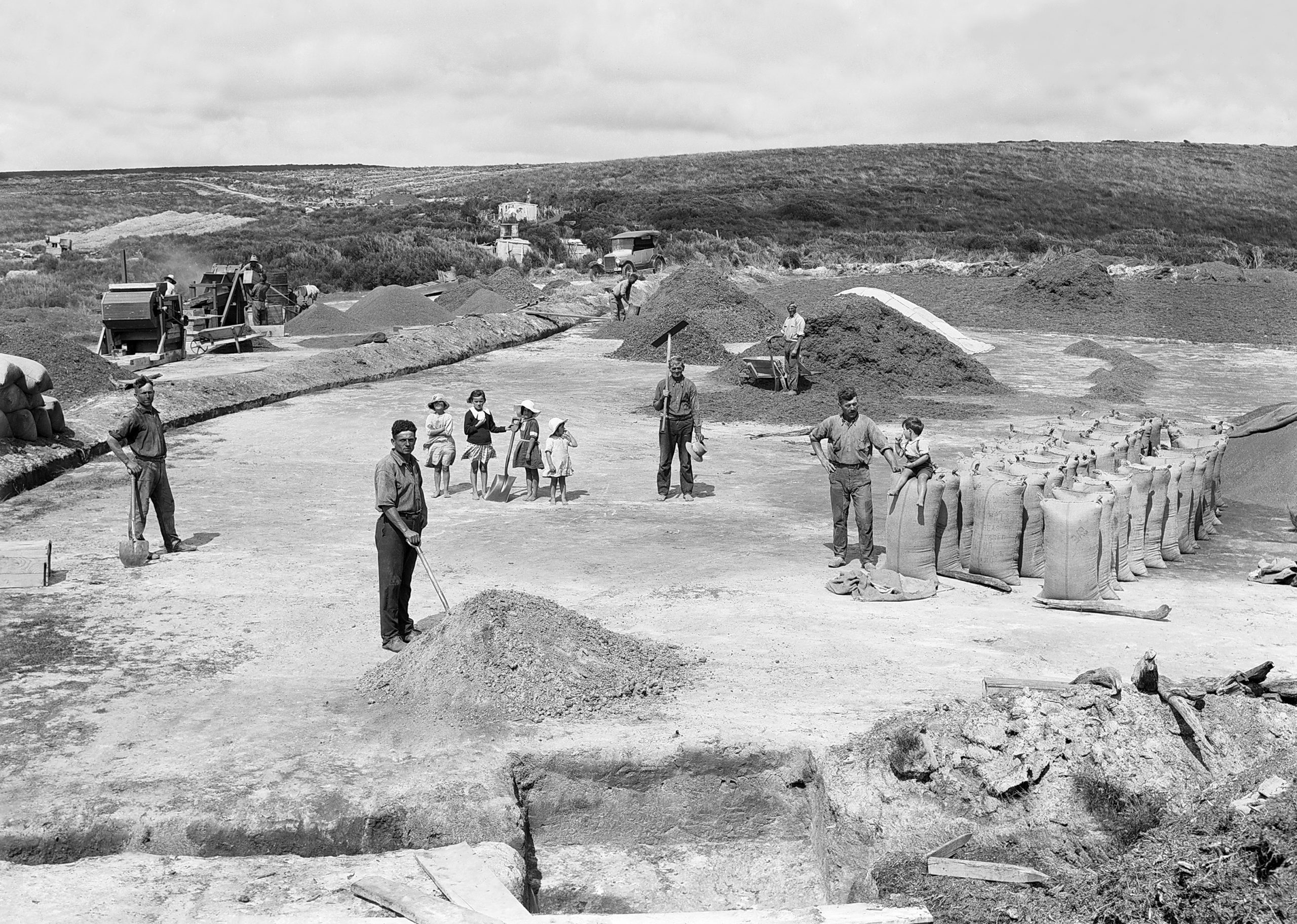 Polly and the family remained down on the farm. She managed the farm workers and cooked their meals. Anne, Charlotte, Phoebe, Dolly, Rose and Melva took turns staying up on the gumfields, cooking for their father and his workmen.

Sadly, Polly died on 6 January 1944, aged 46 years. She is buried at the hillside cemetery at Ahipara. Nicholas was unable to cope with his large family alone and hired several different women to help out. One was an English woman, Nancy Byett. Nancy became Nicholas second wife. She had immigrated from Gloucestershire in 1923. 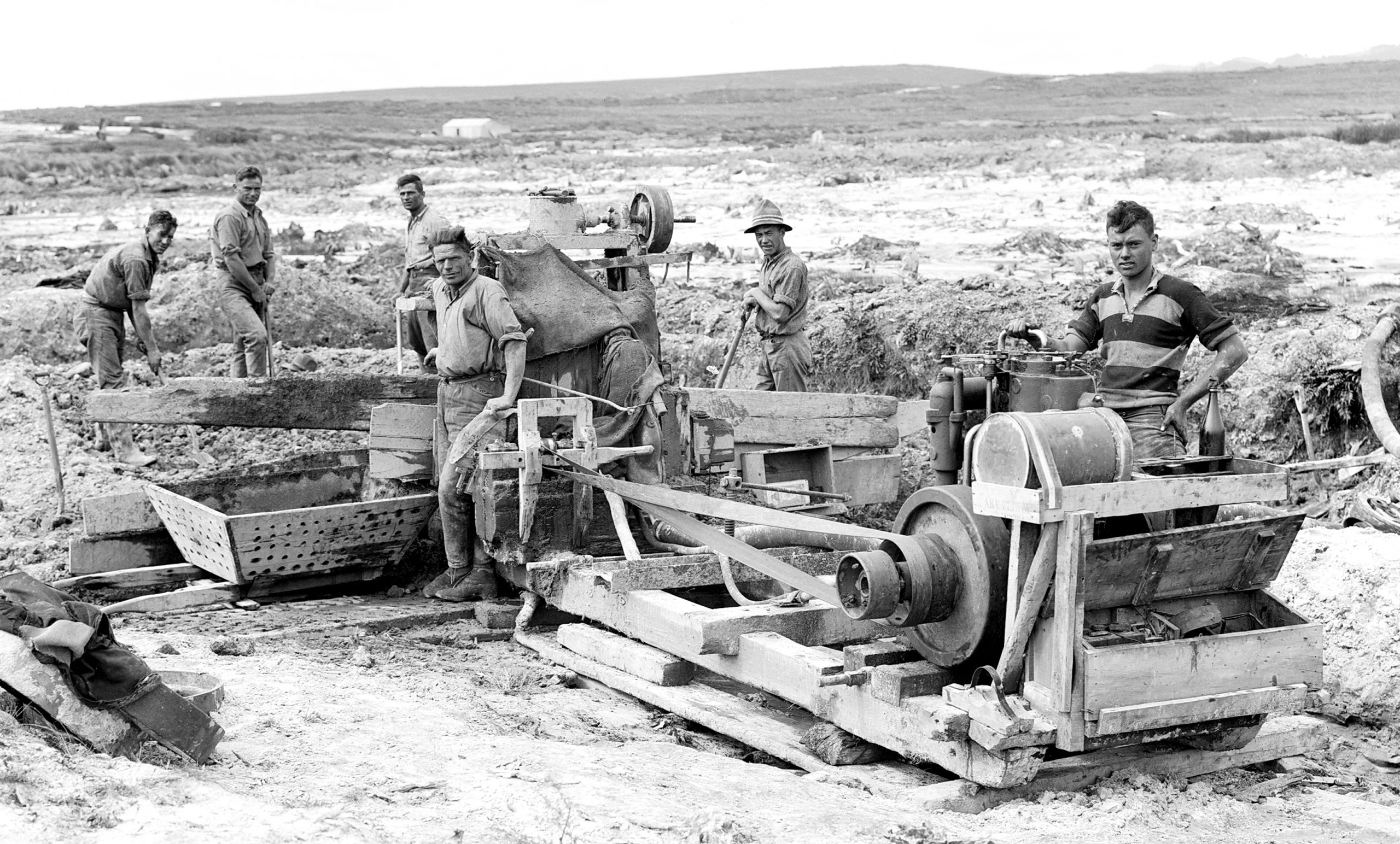 Gum cleaning apparatus on Ahipara Hill. Nicholas (Eku) Covich junior is on the right with the striped shirt. Jack Kostanich is fourth from left, standing by the machine. Allan McPherson is standing in the centre with hat.

They had a son named David. David and his father were very close. Nicholas remembered his homeland as a happy place even though the people were poor and it was a struggle to live. He had always wanted to spend the latter years of his life back in Croatia.

In 1957 Nicholas took a long-planned trip back to Tućepi, Croatia with Nancy and David. He was saddened to find the village neglected and more primitive than when he had left in 1903. The family returned to New Zealand at the end of 1958. Just five years later Nicholas died. He was buried with Polly at Ahipara. 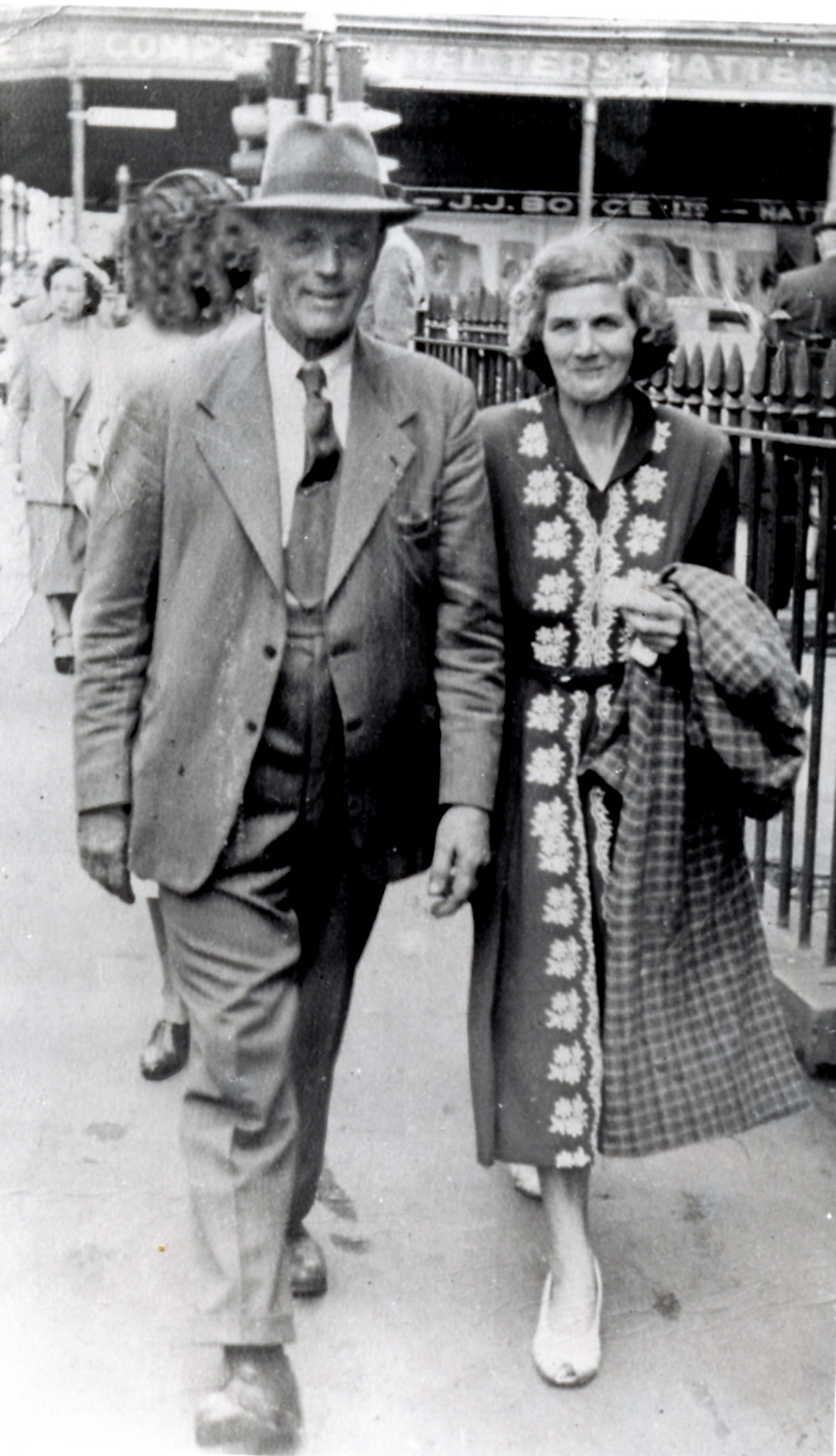