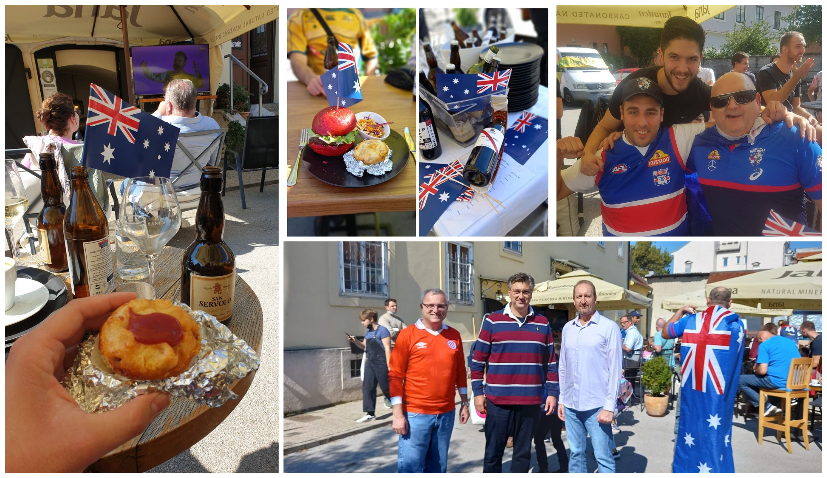 Last Saturday, the 25th of September was the largest gathering of Australian Croatians and Australian expats in Croatia in 2021 and since the global pandemic began.

The scene took place at the Aussie-owned Bornstein wine bar on Kaptol, just above the iconic Zagreb Cathedral, which holds a special place in the hearts of many Croatians and that of tourists who have visited this beautiful land. Which made perfect sense to be the host to this much awaited event.

It was a fine, sunny last Saturday of September and prime conditions in the capital of Croatia, Zagreb for an outdoors viewing of the 2021 AFL Grand final between the Western Bulldogs and Melbourne Demons. A battle between two fellow underdog teams, given their history and a more than valid reason to get out into the sun and catch up with some familiar faces whilst turning out for this must watch event with fellow Australians living in Croatia. 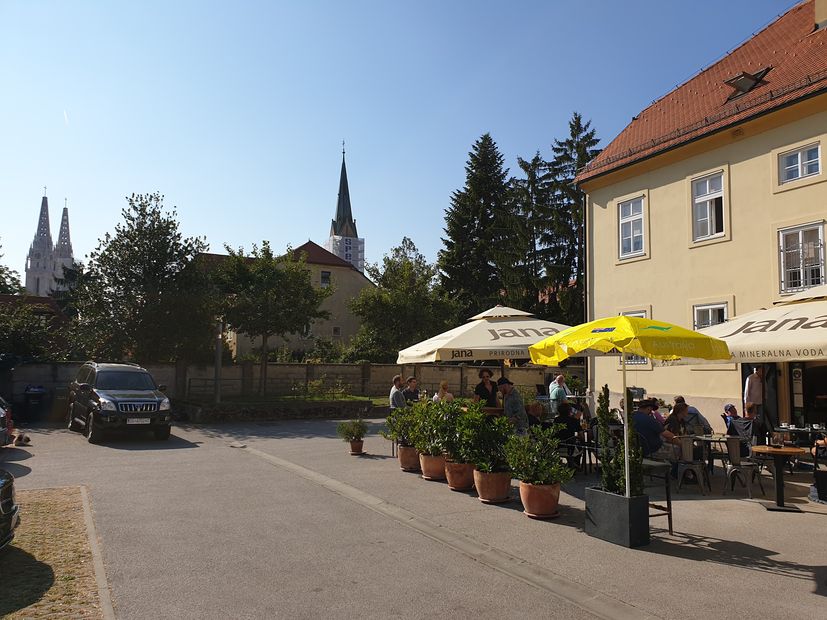 Bornstein wine bar terrace and Zagreb Cathedral in the backdrop

As one of the two teams competing in the match which was to be televised LIVE, is the club I’ve supported my entire life. The excitement the night before and on the morning of the game, whilst travelling towards the Zagreb city centre was palpable. 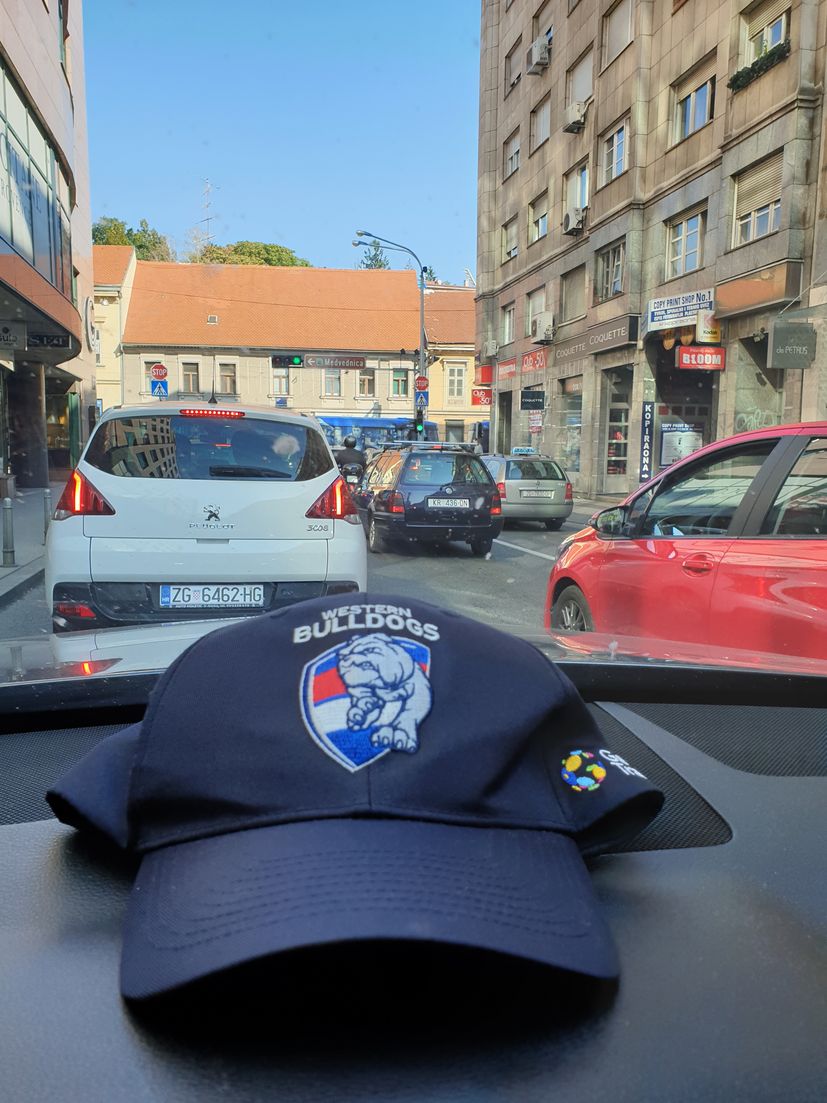 Driving to the game

Arriving at the Bornstein wine bar was met by a plethora of familiar faces from the Australian expat and returnee community in Croatia. All having been warmly welcomed by the Bornstein owner, Ivan Srpek, a fellow Australian-Croatian returnee from Adelaide and a pioneer of the wine distribution industry in Croatia. Also a former AFL in Croatia player, having represented the Croatian Aussie rules national team. As well as by the lovely Australian embassy staff, in particular by the friendly consular representative Dijana Grahovac who handed out mini Australian flags to give to the crowd – a very nice touch. Which was a very welcome sight, after not having seen a large number of these people since the last Grand Final in 2020. 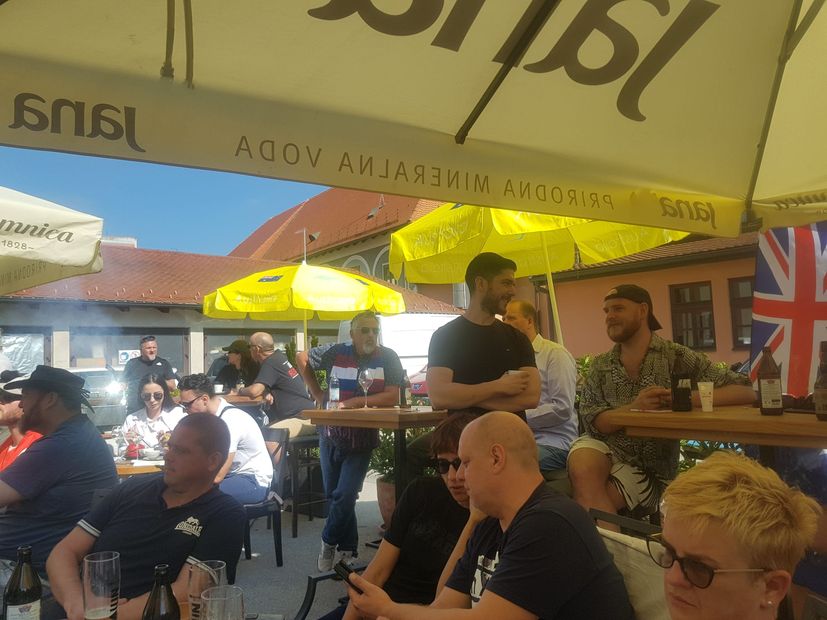 I, of course, came wearing my Western Bulldogs gear which reflected the red, white and blue tricolour of the Croatian flag (points for guessing why I chose to support the team *wink*). Having experienced the magical feeling of the Bulldogs first Grand final win in 62 years in 2016, it was an important day for myself as well and one I was very excited about – regardless of the result. Having supported an underdog team (pardon the pun) all of my life, occasions like these were to be savoured. Especially whilst living in the land of the red, white and blue. This Grand Final experience was to be a special one. 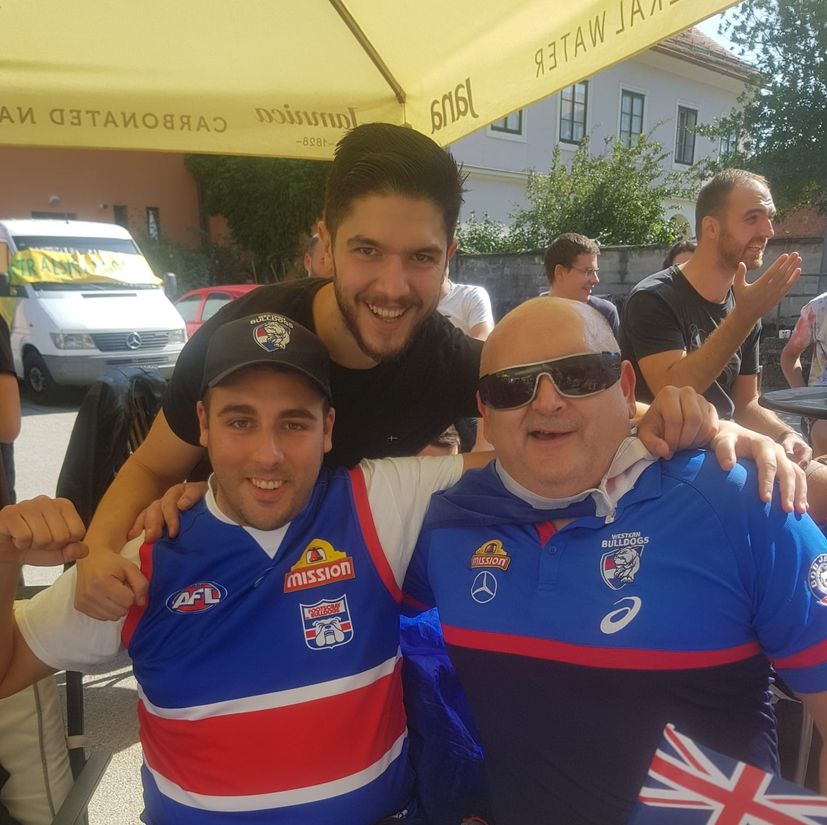 The crowd was a healthy mixture of Western Bulldogs and Melbourne Demons supporters, as well as a large contingent of neutral enthusiasts of the Australian rules football game. With the occasional Australian tourist (living in other European capitals), passing through Croatia on their holidays. As the kick-off of 11.15AM (local time) edged closer to its start, the sun was rising in intensity and so too was the excitement of the 100+ crowd in attendance.

In the background you could hear the sizzle of Aussie burgers made by Ivan from Bornstein and his attentive staff, whilst my own home-made meat pies were being warmed up. About to be enjoyed by the punters, keen for an authentic Australian experience after having the option of even visiting Australia taken away from them for the past 18 months. It really felt like we were in the great land down under and the sunny September weather was there to match it. 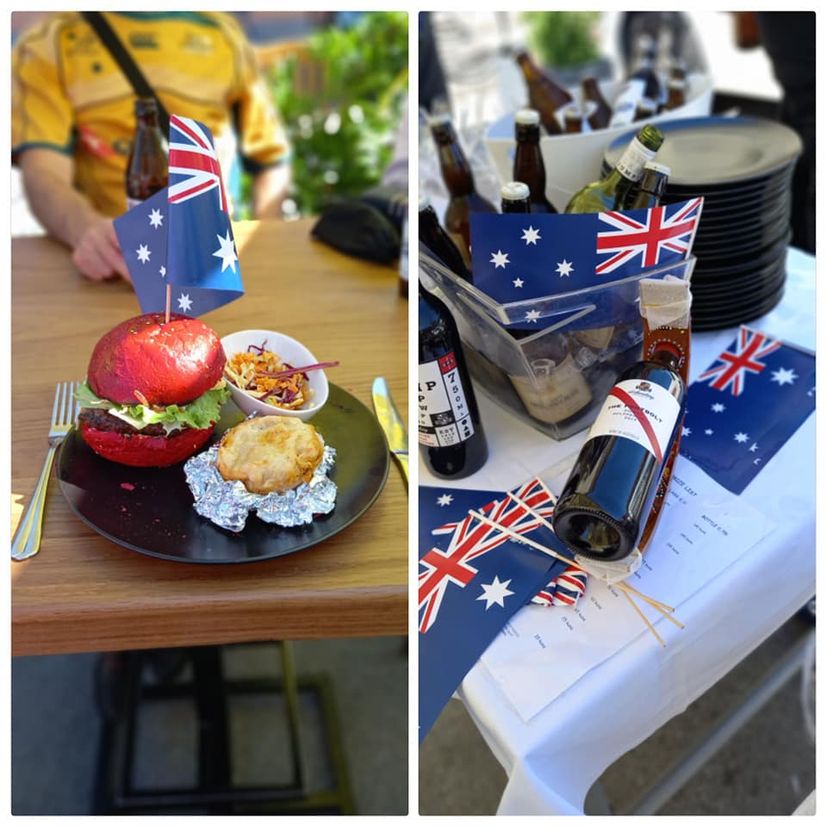 As the Australian anthem beamed out live on the TV infront of the crowd and the opening bounce approached, a familiar sight and sound of anyone who has ever been to Australia. Shouts of “Carn Bulldogs!“ and “Go Dees!“ could be heard, depending on which team was preferred by the attendee.

The game started with high intensity, the Demons taking the lead and afterwards the Bulldogs chasing their lead for the first half. Every kick, bounce and mark (catch) of the ball was met by familiar sounds from the local crowd – which could have been heard at the Optus Stadium in Perth where it was being held or at the Melbourne Cricket Ground (MCG), the home of Australian Football. A common feeling amongst the crowd was that it was as though we had transported ourselves to a pub in Australia for the day, curing the homesickness felt by many and a welcome morale booster in the times we live in.

At the half-time siren, the feeling was very upbeat amongst the majority Western Bulldogs support in attendance- the score was 47-39 for the Bulldogs after coming back from a 3 goal deficit at the first-quarter to eventually take the lead. Whispers amongst the crowd present were that it could be a 2nd Premiership win in 5 years and only the 3rd in the clubs 144 year history. However, as with all teams I support. I was not holding my breath, as it’s a game of four-quarters and the oval ball can bounce any way. In addition to the fact that the Melbourne Demons had not won a premiership in 57 years, since 1964, when they won it against the Bulldogs. Talk about an final packed with history and meaning! 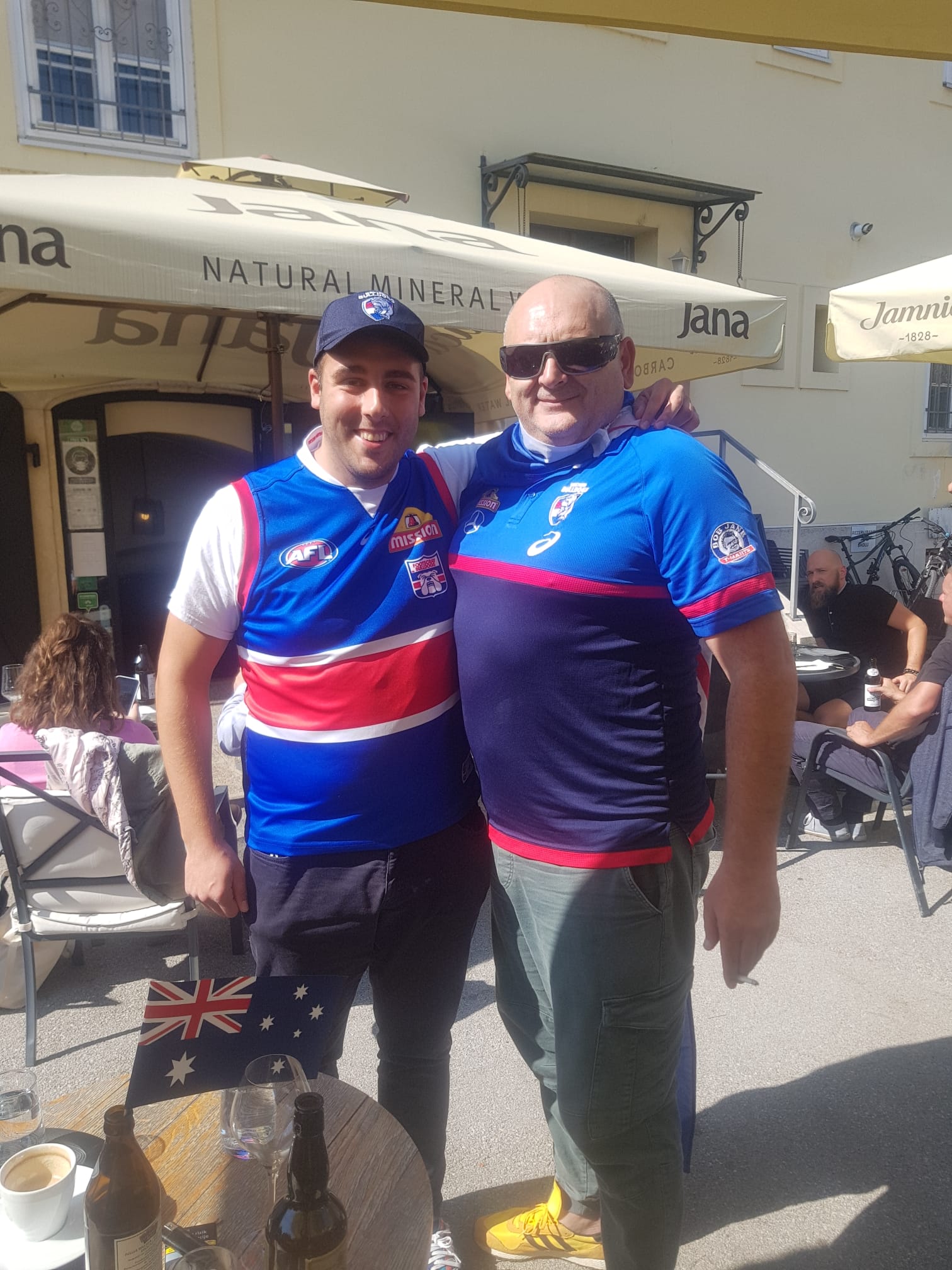 The Aussie burgers and meat pies were hot and were keenly consumed by the attendees, matching the atmosphere felt so far and the sun shining up above us. Using the rest between the two halves of the game, it was a great opportunity to chat to familiar faces and meet the very friendly Australian embassy staff, including the newly arrived deputy chief of Mission and charge d’affaires – Phil Shakespear. A Canberra native and avid sports fan who was very friendly towards the attendees wishing him a warm welcome to the country. 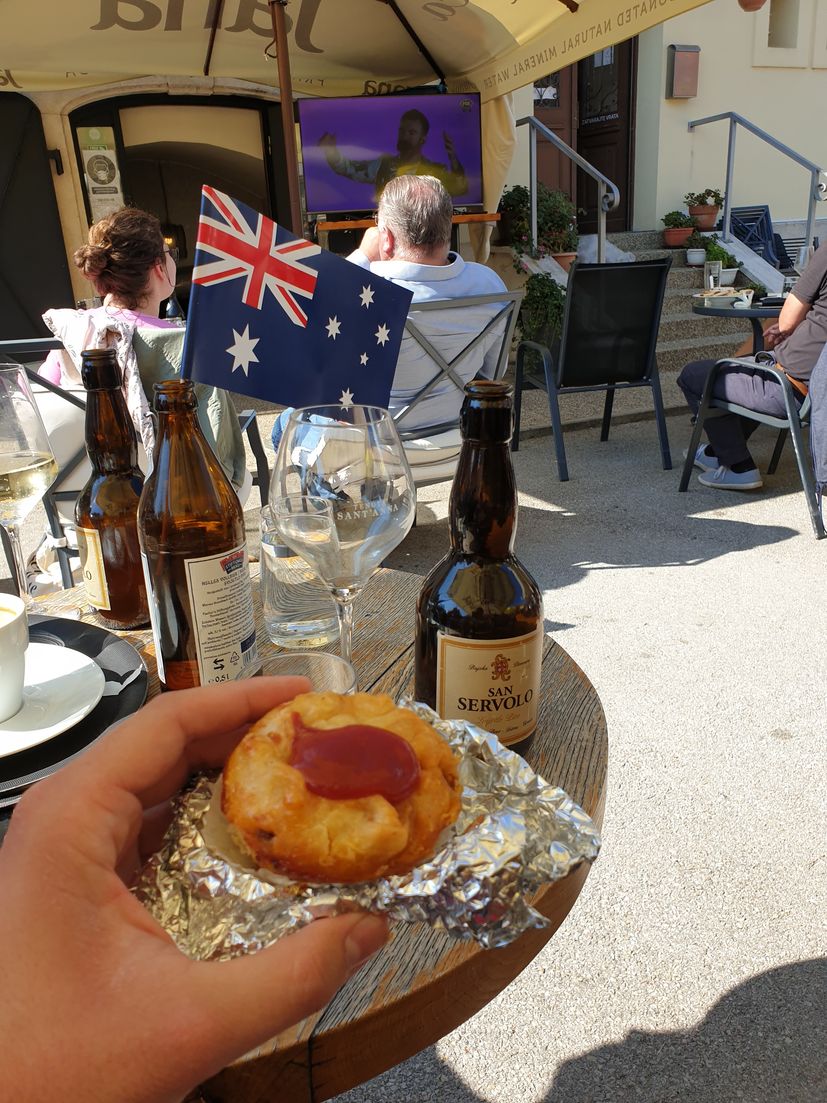 Making for a great half-time atmosphere, only for it to be additionally seasoned with the authentic Australian atmosphere – by a breakout game of “kick to kick“ and “markers up“ by the crowd in attendance with an authentic yellow  leather “Sherrin“ football. Played by a healthy mixture of Australian expats and local Croatians that play in the AFL Croatia league. An unbelievable feeling, as though we were in the hallways and the outer grounds of the MCG. The Grand final experience as as authentic as they come and everyone was in the element.

To additionally season the atmosphere during the crowd involved game of “Markers up“. A notable and unexpected guest happened to arrive, no more and no less than the Prime Minister of Croatia – Andrej Plenković. By pure coincidence, wearing a long-sleeved rugby shirt in navy blue and maroon colours (matching the Melbourne Demons, which perhaps brought them luck later in the game!). Which was met by absolute surprise of the crowd in attendance and matched by the reaction PM of Croatia himself. He could not believe how many Australians had arrived to a Grand final screening of Australian rules football, in the capital city of Croatia! As he was only passing by on a leisurely Saturday morning stroll to pick up his children from French language classes in the nearby vicinity. However he appeared to be fascinated by the game and used the opportunity to greet our most notable Australian-Croatian returnee in Zagreb, heroic lawyer Don Markušić as well as posing for photographs with the newly arrived Australian embassy staff. Don, proudly donning his old school retro Melbourne Croatia, with the famous Jimmy Mackay number 10 on the back. Proving to be an impromptu warm diplomatic exchange between our two dear countries of Australia and Croatia. What a day so far!

After warm embraces, it was back to our seats and time for the second-half (three-quarter time). With full bellies and ice cold local beer and Australian wine being poured, the roars of the crowd resumed as the game lifted with intensity once more. For most of the third quarter the Bulldogs held their lead which was growing, only for the last 10 minutes of the third-quarter to be taken over by the Demons, whose lead was only to rise in intensity after goal, after goal was kicked by the team in navy blue and red. The fourth quarter, only matched intensity of those last 10 minutes, as the Demons absolutely raised the notch of their play and it became a one-way game as the lead over the Bulldogs grew every minute.

The despair could be felt by the majority Western Bulldogs crowd, however, the loud minority support of the Melbourne Demons grew in decibels and rightly so. What an amazing performance by the Melbourne Football Club, the score became increasibly impossible to catch and as the final siren approached. The excitement and tears of joy could be felt both on the TV and on the tables in attendance supporting the Melbourne Demons, with the final score ending in a resounding win by the Demons of 140-66 over the Bulldogs. The most excited and loudest cheers could be heard from a table with a small contingent of Dee’s fans. 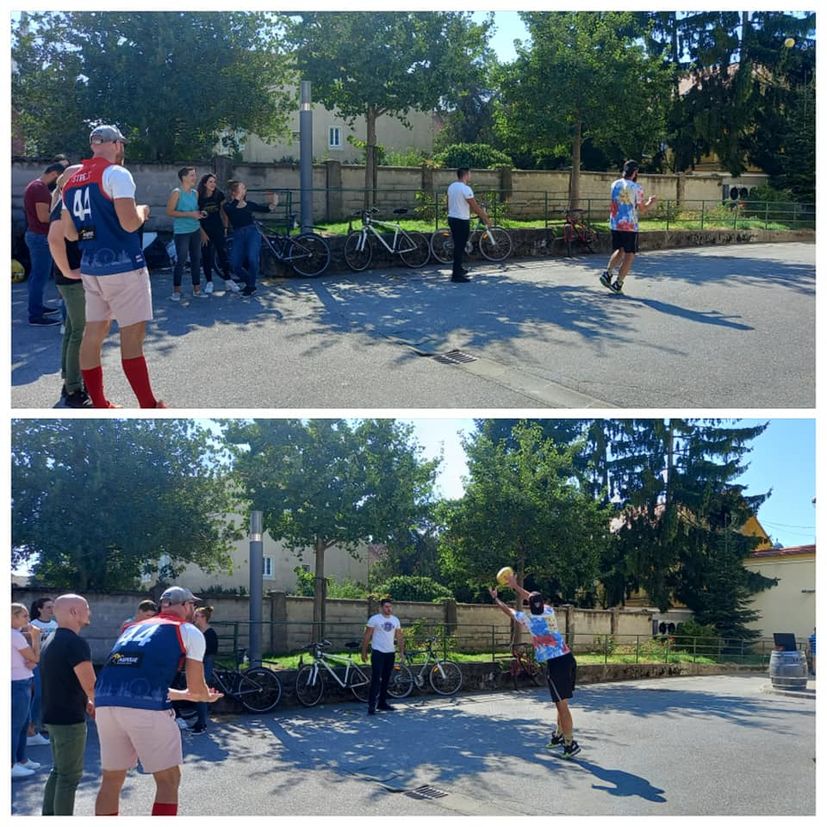 Having experienced the excitement of the 2016 Grand Final win by the Bulldogs myself, I knew the amazing feeling that such a victory would bring, especially it having arrived after 57 years. I made sure to wish them my congratulations as they had waited their entire lives for this moment and it was definitely a feeling to be savoured.

Before the emotional trophy presentation on TV to the winning team, a ground-breaking announcement was made by Ivan of Bornstein. After the sport having humble beginnings, started by Australian expats of Croatian extraction some 15 years ago and playing on all sorts of pitches, from rugby to bumpy soccer pitches. The following Saturday in a weeks time will be a momentous occasion for the Australian-Croatian community in Zagreb and the sport of Australian rules football. 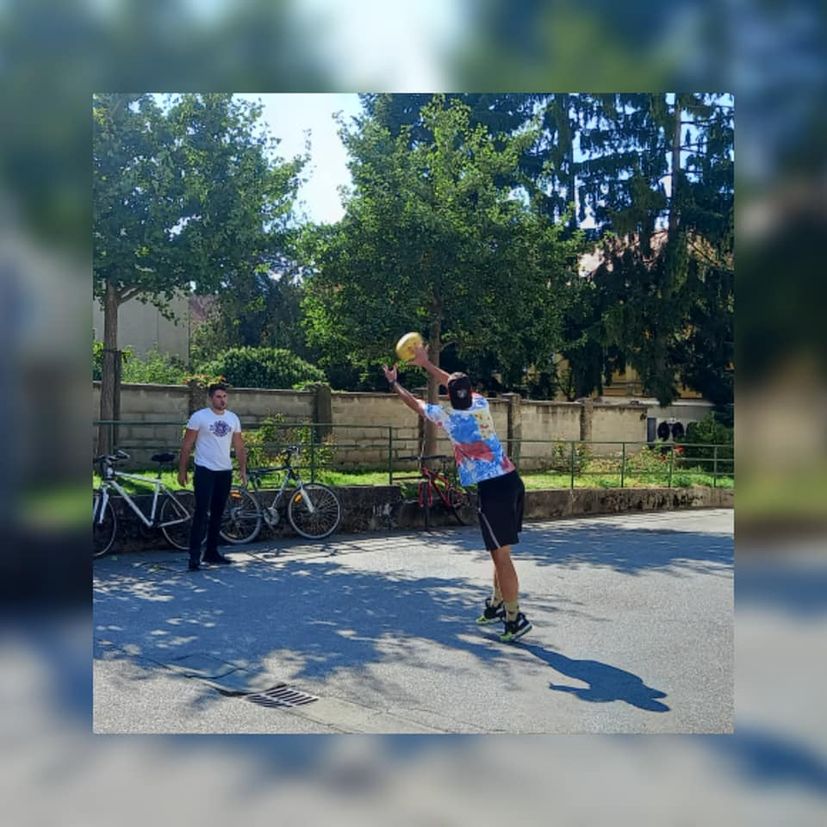 The Croatian Australian Rules Football association (SANH) proudly announced that after many years of planning, paperwork and hard physical work involved – after many years of waiting. The first full sized Australian Rules football pitch is to be grandly opened in Zagreb, Croatia in a weeks time on the upcoming Saturday the 2nd of October at the Mladost Sports Centre and Zagreb University of Kinesiology (Sports science). With all attendees of the Grand final event whole-heartedly invited by Ivan of Bornstein. Which will prove to be another important and historic date to look forward to. 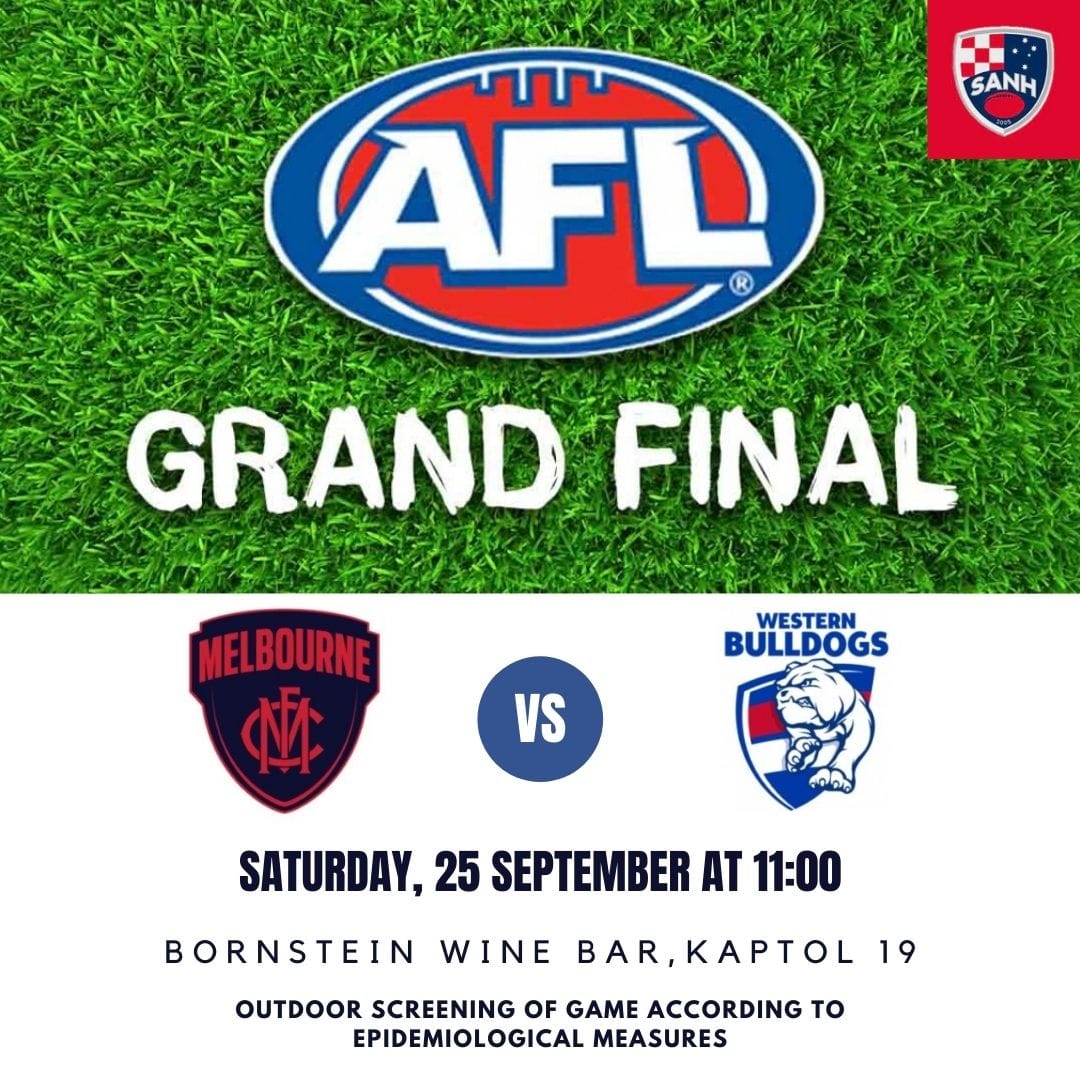 What a game!! What a gathering of Australians in Croatia, the most exciting event on the calendar for the local expats and returnees in attendance. Well worth the wait and an action packed day to remember for this ever growing community in Zagreb and Croatia.