Home » Sport » Olympics: Gold for Mektić and Pavić in historic all Croatian final 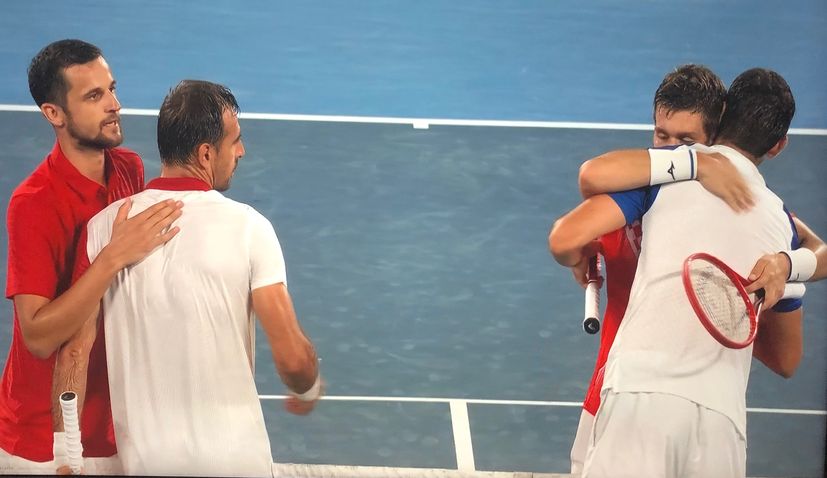 All Croatian final goes the way of Mektić and Pavić (HRT)

Croatia has won its fourth and fifth Olympic medal in tennis after Nikola Mektić and Mate Pavić won the all Croatian men’s doubles final in Tokyo on Friday.

Mektić and Pavić won the gold medal, whilst Marin Čilić and Ivan Dodig had to settle for silver after the world no.1 team won today’s final 6-4, 3-6, 10-6.

This was the first time in 113 years that the final was played between teams from the same country.

Mektić and Pavić, who had not lost their serve the whole tournament before today’s final, broke the serve of their Davis Cup teammates in the opening game of the match.

Čilić and Dodig could not manage a break of their own as Mektić and Pavić controlled the set to take it 6-4.

After both teams held serve early in the second set, it would be Čilić and Dodig who would broke Mektić and Pavić for the first time in Tokyo to take a 3-2 lead. Čilić would hold serve to extend the lead to 4-2 and they would close out the set 6-3 to send it into a super tie-breaker.

The gold medal caps adds to an amazing 2021 for Mektić and Pavić who have been unstoppable since teaming up for the first time at the start of the year.

“We are happy. This is a big thing for Croatian tennis,” Mate Pavić said upon reaching the historic final.