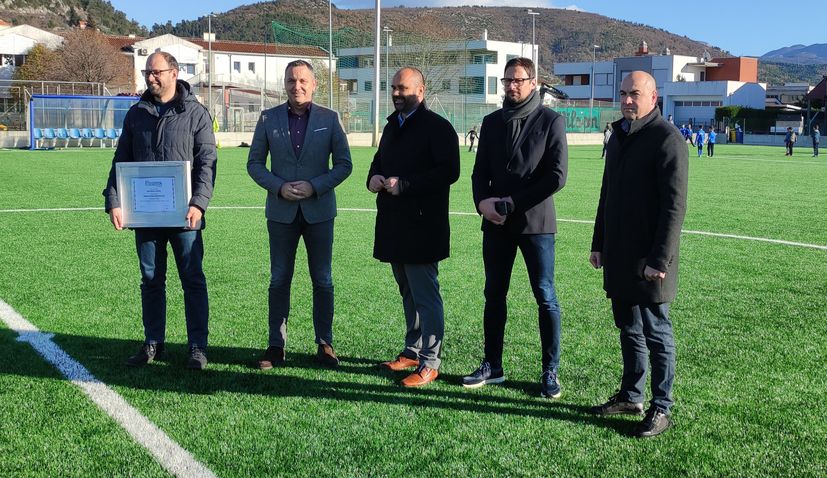 Today in Metković, a town in southern Croatia on the banks of the river Neretva, the President of the Croatian Football Federation (HNS), Marijan Kustić, ceremoniously handed over a new pitch with artificial grass to the Mayor of Metković, Dalibor Milan.

The Croatian Football Federation financed the new acquisition, delivery and installation of artificial grass on the pitch at the stadium in Metković, while the city financed the preparatory works. 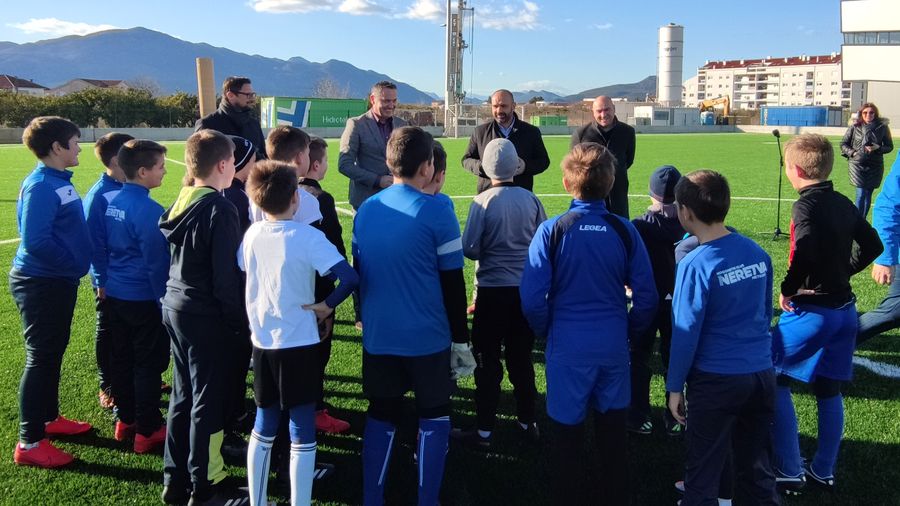 “We emphasise once again that investing in infrastructure is one of the main strategic determinants of HNS, and I am really happy whenever we open another new pitch. Metković is an important football and sports city, a city that has given us a lot of great football players and national team players like Srna, Štimac or Petković, as well as great sports workers like Ante Pavlović or Ante Martinac. That is why we are proud that here in Metković, in cooperation with the city, we have created the preconditions for quality work of young football players. I thank Mayor Milan for his cooperation in this project and I wish a lot of success to Metković football in the future,” said HNS president Marijan Kustić, who also handed over a UEFA donation to the Friends Association.

Kustić presented a symbolic plaque to the Friends Association, which received 52,630 euros from the UEFA Children’s Foundation based on a HNS application. The UEFA Children’s Foundation annually supports 20 associations and organiSations with 50,000 euros, according to proposals from national football associations. For 2021, donations amount edto 52,630 euros because 19 associations were selected instead of the usual 20 organisations, while the total fund remained the same (one million euros).

Last year, the Croatian Football Federation applied for a donation from the Association of Persons with Disabilities “Friends” from Metković, which helps persons with disabilities, with special emphasis on children. UEFA’s Children’s Foundation selected the HNS application as one of the winners of the donation, the fifth year in a row that the Federation has successfully applied for a donation project.

Kustić presented the symbolic plaque to the president of the Friends Association, Nikola Popovac.

“I am extremely pleased to hear how important these funds are for the work of the Friends Association and that they will be used in the best possible way. We are among the few federations that have had a successful application every year, and we will continue to strive in various ways to provide funding for organisations that help needy children, both through the Vatreni Foundation and through such UEFA funds. I wish the Friends Association a lot of success in its work, with the message that they will always have a friend in the HNS,” said the president of the HNS, Marijan Kustić.

HNS has had successful applications for the World Roma Organisation (2017), the Autism Association “Pogled” (2018), the Ivan Štark Centre for Education (2019), the Croatian Association for Down Syndrome (2020) and last year for the Friends Association.