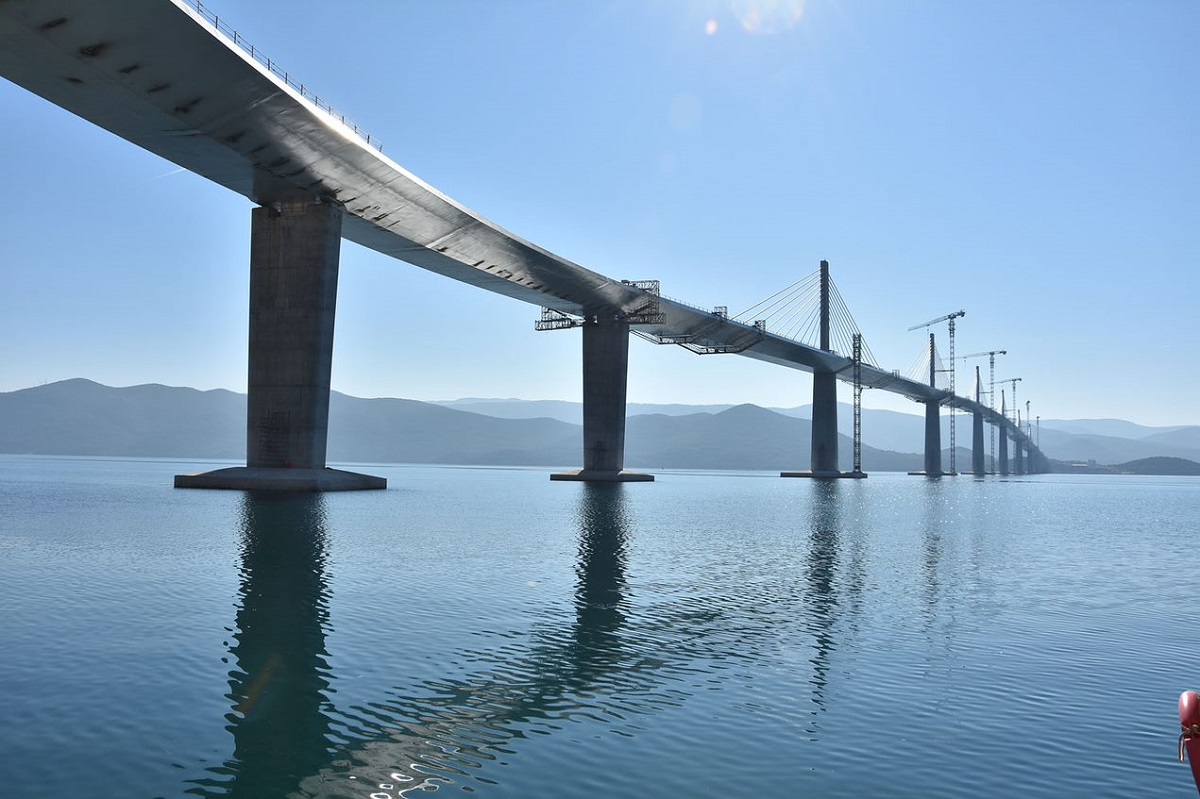 Ranking among the most demanding bridges in the world—not only in terms of complexity of construction but also in a complex design—2,404-m (7,887.14-ft) long, Pelješac bridge is one of the most important and largest infrastructure project in Europe. Connecting Croatia’s Pelješac peninsula with the mainland to bypass a short stretch of the Bosnia and Herzegovina coastline started three years ago.

The project is worth 550 Million Euros, although most of the funding came from the European Union.

ln order to meet the main criteria of quality design, such as stability, durability, economy, and integration into the environment, the inventive design proposed the construction of an extra dosed bridge with an integrated hybrid structure comprising of five central spans, each 285-m long, and six low pylons. An especially careful approach was taken to ensure durability for the extended lifespan of over 130 years. 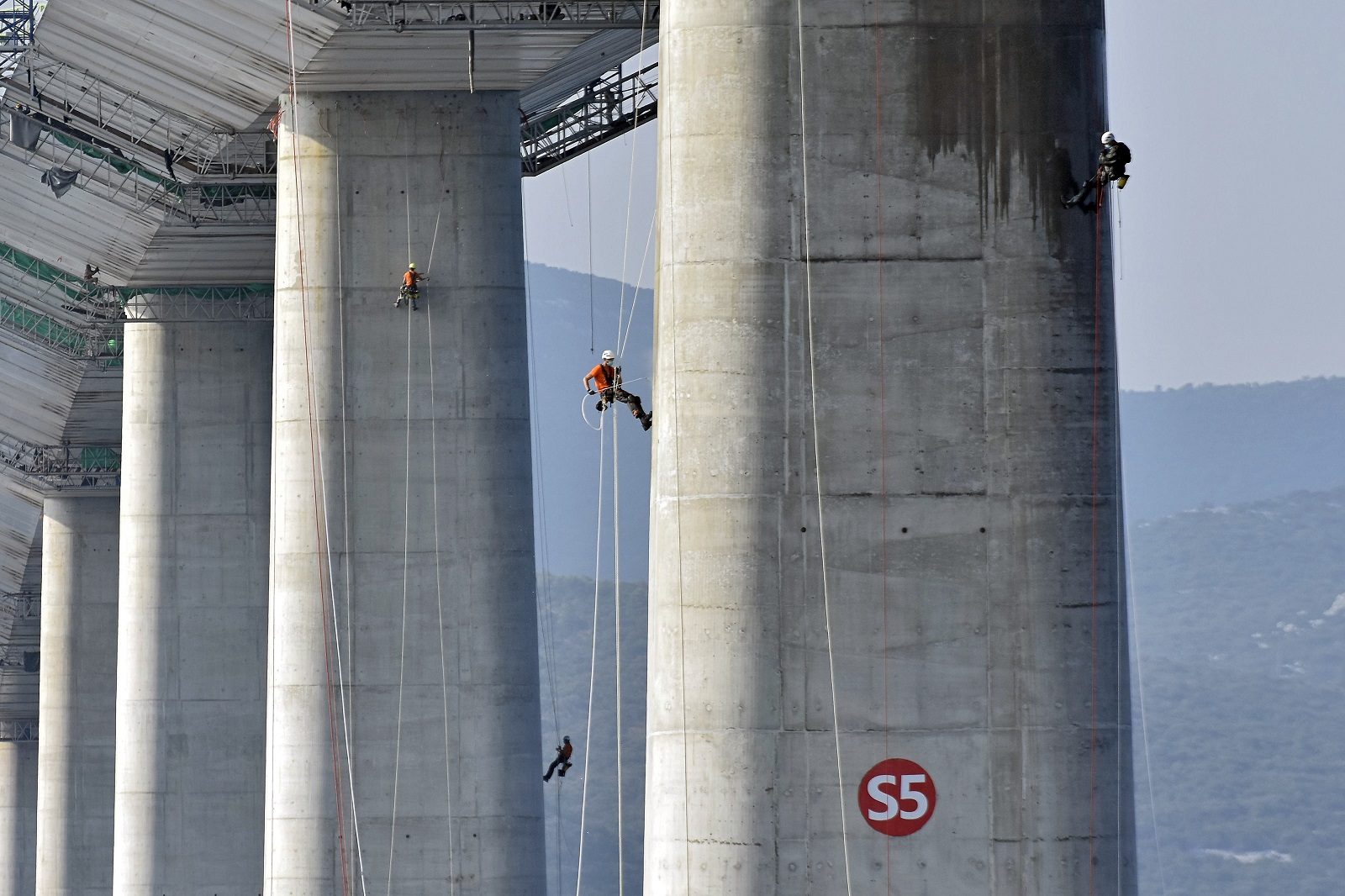 Cortec’s MCI® 2018 was specified on this project during the design phase as a silane-based impregnation with a migrating inhibitor property to protect against the harmful effects of corrosion, thus extending the service life of the bridge. MCI® 2018 is a 100% silane-based concrete sealer containing migrating corrosion inhibitors that allows deep penetration into concrete and provides water repellence by chemically reacting with the cementitious substrate. It seals surface pores, preventing the intrusion of chlorides, reduces carbonation, and protects from the ingress of wind-driven rain. Treated concrete surfaces are fully breathable and their natural moisture-vapor transmission is not affected.

After repair of surface damage and cleaning of discolorations and other surface defects, the concrete surface of the pylons needed to be protected with a colorless silane coating to improve durability and increase the resistance of the concrete surface to long-term external influences. MCI®-2018 carries CE certification that indicates conformity with health, safety and environmental protection standards for products sold within the European Economic Area (EEA). 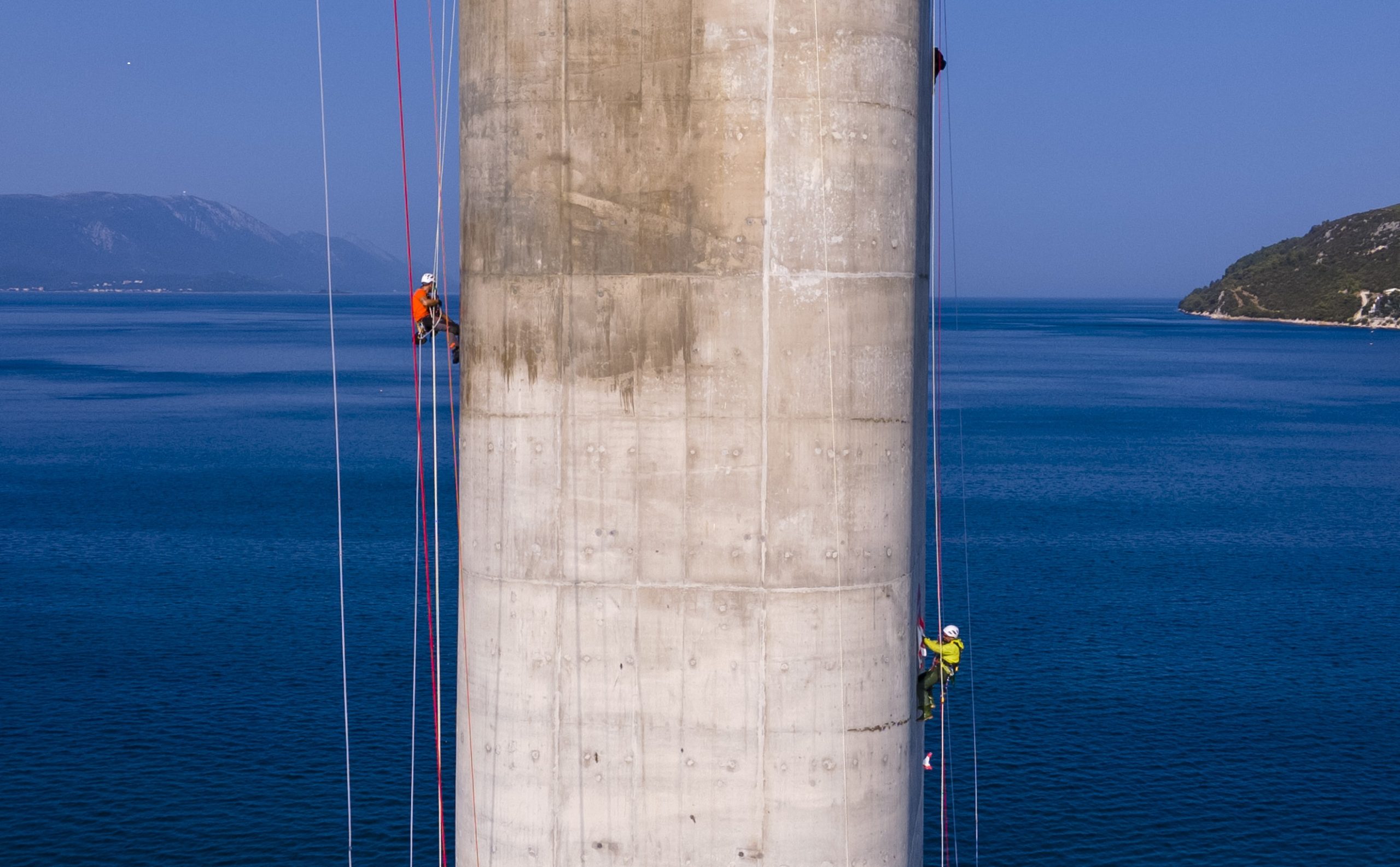 85 mm stainless steel reinforcement and impregnation of all concrete surfaces with MCI®-2018 was chosen as the strategy to help the bridge achieve a 130-year service life. MCI®-2018 was applied on the entire substructure of the bridge. All concrete parts were coated with MCI®-2018 by a spraying technique. The work was performed in accordance with the project requirements and after surface preparation to full functionality. This included:

MCI®-2018 contains time-proven Migrating Corrosion Inhibitors (MCI®). The silane component provides water repellency by chemically reacting with the cementitious substrate under proper application, decreasing the ingress of aggressive materials. The product penetrates deep into concrete, providing corrosion protection to reinforcing steel from existing water and chloride ions, or other contaminants. For the Pelješac bridge, continuous monitoring of the condition of the structure at one central place will be done during the construction phase and the exploitation phase to examine parameters of structural behavior, time, seismic activity, and structural durability. 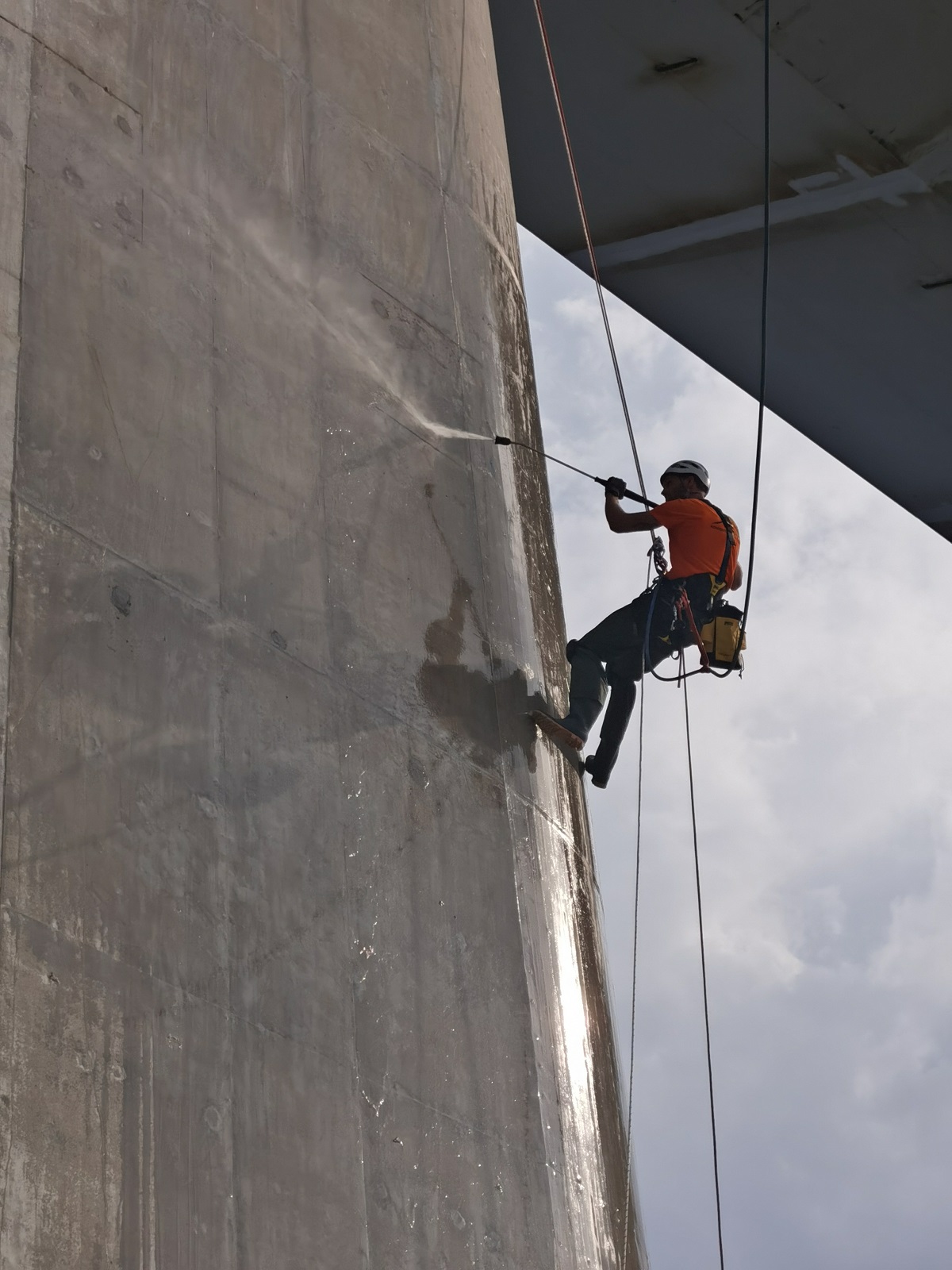 The designer of the bridge specified corrosion protection for all concrete segments in order to achieve a 130-year service life. After completion, the Pelješac Bridge will be ranked among the five largest and most attractive European bridges, constructed at the beginning of 21st century. This important new structure is connecting two separate parts of Croatia and bypassing border crossings at the short coastal strip near Neum in Bosnia and Herzegovina. 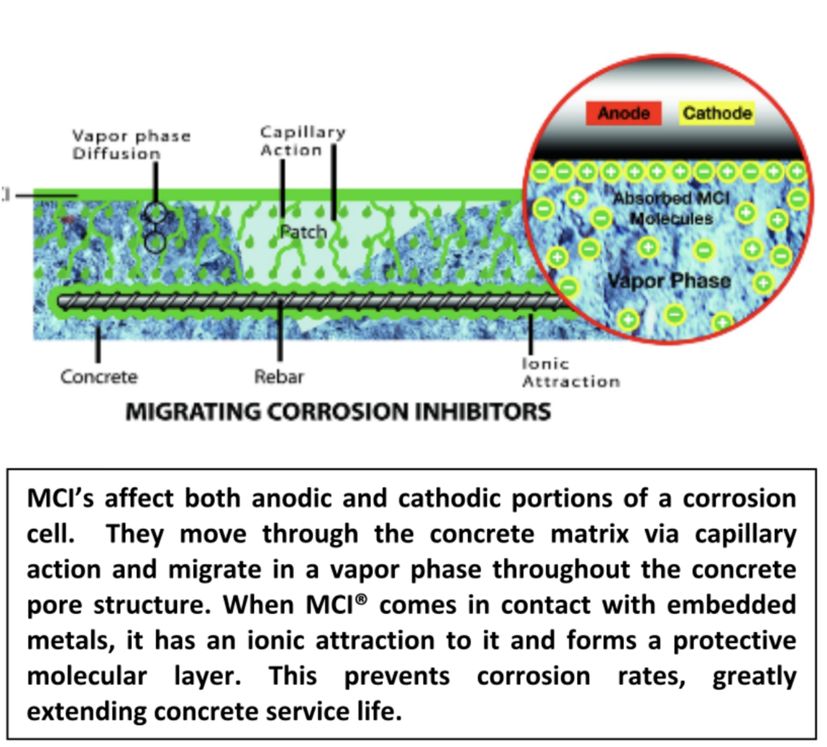 Cortec’s CEO, Boris Miksic, a Croatian-American businessman, is proud that his patented technology was used on this historic project to connect two parts of his country. “Our MCI® technology is used in largest construction projects throughout the globe. I dedicated more than forty years of my life in developing most advanced, environmentally safe corrosion protection solutions. Witnessing its application in my home country on this monumental bridge structure is truly a special feeling. Croatia has gone through some tough times, having to fight its independence in a war 30 years ago. Seeing it prosper and develop in of the most desirable countries in Europe feels just about right and completion of Pelješac bridge is huge step forward for all of us.” 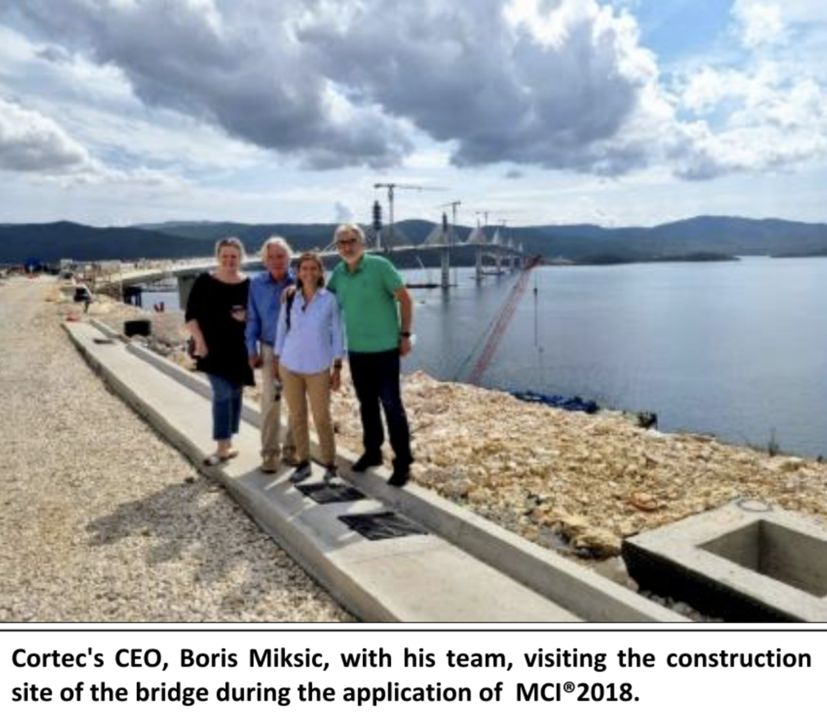