(photo credit: Ivica Galović/PIXSELL / Feather is mightier than the sword)

The remarkable love story of storks Malena and Klepetan from Croatia has touched the hearts of many around the world.

Now the man who has taken care of them has penned an open letter to the President of Lebanon, Michel Aoun.

For the last 25 years Mr. Stjepan Vokić has taken care of the broken-winged stork Malena, and for the last 15 years waited with her for the return of Klepetan from Africa every spring.

Fearing for Klepetan’s safety, Vokić has sent an open letter to Lebanon’s President to help prevent the killing of birds migrating over Lebanon. 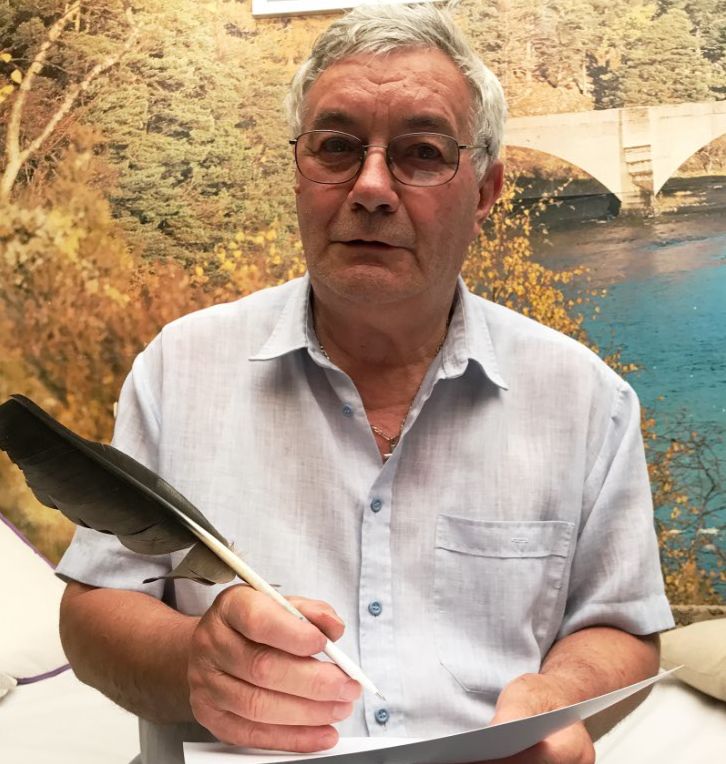 In his letter he points out that every year around two million migratory birds get killed in this air route… some for fun, some for food, some for sale. This year another Croatian stork, named Tesla, was died there.

Scientists had fixed a GPS tracking device on Tesla to monitor migration.

Vokić pleads in his letter for the President to do everything in his power to ensure that migratory bird protection laws remain in effect and that they are applied to their fullest extent and has sent him. Klepetan’s feather “because I believe that the feather is mightier than the sword.” 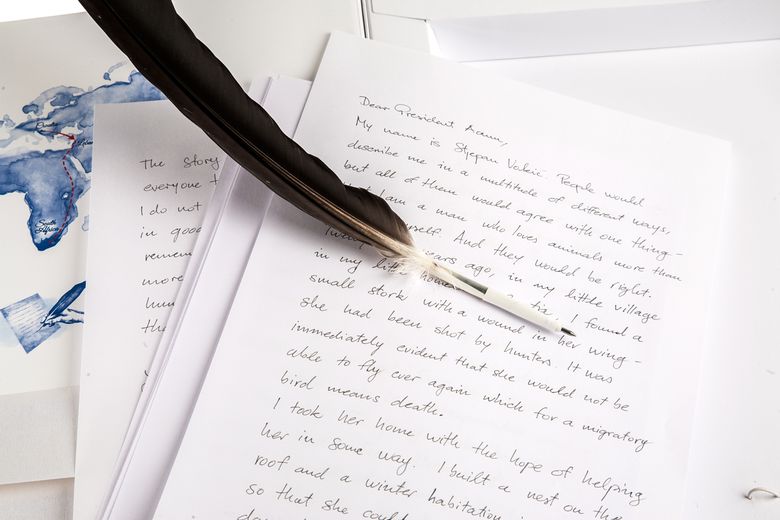 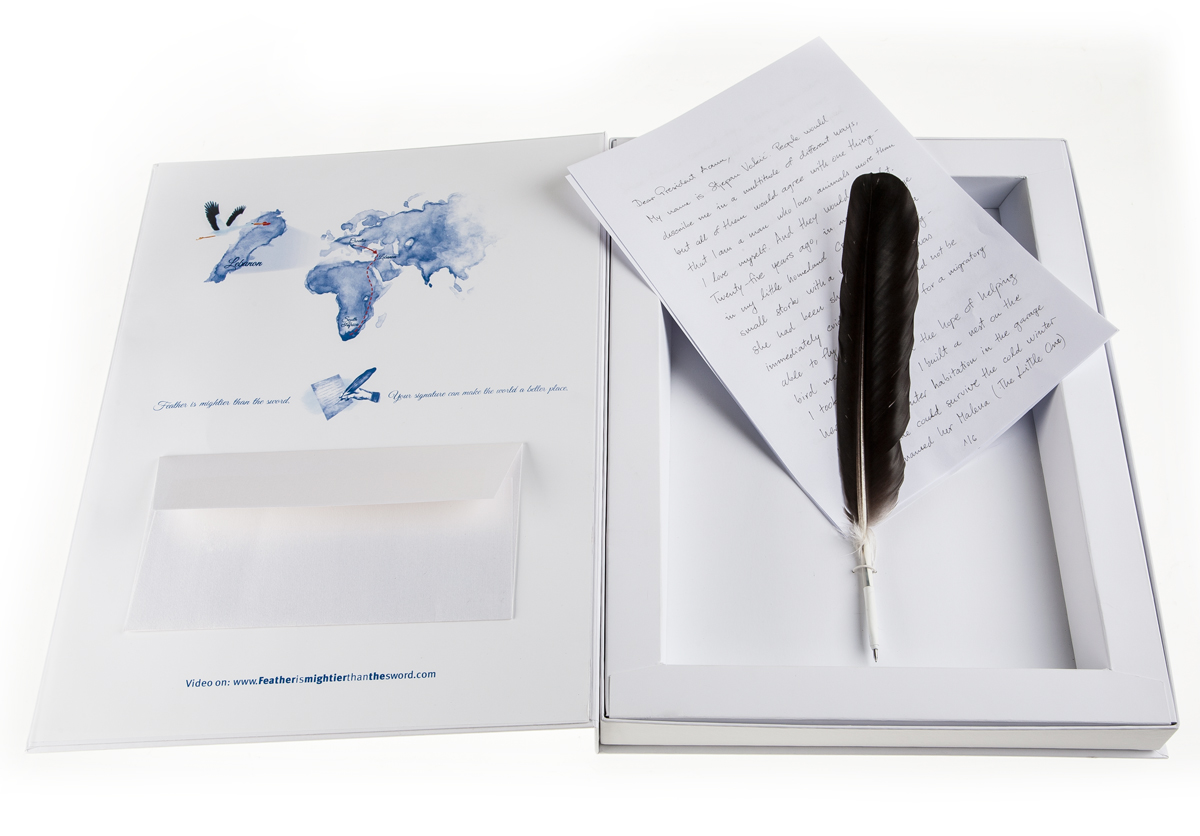 The letter and feather in the box for the President

The open letter in full below:

My name is Stjepan Vokić. People would describe me in a multitude of different ways, but all of them would agree with one thing – that I am a man who loves animals more than I love myself. And they would be right.

Twenty-five years ago, in my little village in my little homeland Croatia, I found a small stork with a wound in her wing – she had been shot by hunters. It was immediately evident that she would not be able to fly ever again which for a migratory bird means death.

I took her home with the hope of helping her in some way. I built a nest on the roof and a winter habitation in the garage so that she could survive the cold winter days. I named her Malena (The Little One).

Since Malena cannot fly, I have been her wings… I have caught fish for her, I have collected branches for her nest and helped her survive long winters. Over the years of friendship with Malena, I have learned numerous facts about storks and realized how magnificent those creatures are. Fifteen years ago, in the springtime, while returning from Africa, a male stork Klepetan landed in her nest. Ever since that day, he and Malena have been inseparable and up to this day, 59 young storks have set off into the world from their nest.

With the approach of autumn, Klepetan travels to south Africa to winter there, but at the end of March he returns back to his Malena in Croatia. This has been a regular occurrence for fifteen years already.

His 14000 kilometre journey teems with danger and these ten days while we wait for him impatiently are the most tense moments of my life.

However, when Klepetan appears in our back yard and flies to the bucket filled with fish I prepared for him, there is no money or wealth that could replace happiness and joy that fill my heart. I have three sons, and ever since Klepetan landed in Malena’s nest I accepted him as my fourth son.

The thought that one spring he may not return scares me more than anything. Although during his journey, storms, hunger, and thirst threaten him, the most dangerous part of the flight is the 200 kilometre long route over your Lebanon. Every year around two million migratory birds get killed in this air route… some for fun, some for food, some for sale.

This year Klepetan’s friend from the flock, Tesla, had an ill-fortune and got hurt. The stork Tesla was one of the two Croatian storks tracked by a GPS device for scientific research within the project “SOS Stork Croatia” which aims to determine the exact movement routes of the migratory birds of our area.

Just like the previous fifteen autumns, Klepetan will commence his journey to Africa and will once more fly over Lebanon. Unfortunately, I cannot go with him to protect him, but I am sending you this letter written with his feather, in order to implore you, to use the power your esteemed position brings and do everything you can in order to ensure that migratory bird protection laws remain in effect and that they are applied to their fullest extent. I am also sending you Klepetan’s feather because I believe that the feather is mightier than the sword.
I hope that you will use this particular feather, even before Klepetan flies to the south, to sign the law which will make a difference and save these wonderful creatures from merciless killing.

In my country, there is a belief that storks bring children and that they bring new life. These two storks are my whole life. You do not have to believe in stories for little children, but you can believe in the fact that in Croatia every spring, via live stream camera, over a million people await Klepetan’s return and that the moment of his return brings happiness and joy reminding many of what love means and what it means to love.

The story of my Klepetan is a proof to everyone that love simply knows no boundaries. I do not believe in fairy tales, but I do believe in goodness and I do believe that nature remembers and gives back everything, and more than anything, I believe in your humaneness and your benevolence and I thank you for your attention to this matter.

A petition has also been launched which you can be a part of: http://bit.ly/2ovb65j