25,000 years ago, the sea level was about 120 meters lower than today, and all the present-day islands were hills in the middle of the Adriatic steppe. Strong southern winds blew sand on these hills. Such sands are called aeolian sands, after the Greek God of Wind – Aeolus. The sand filled the former karst valleys, creating flat sandy fields on many Adriatic islands in Croatia. All the present-day islands were hills in the middle of the Adriatic steppe – 25,000 years ago (illustration: K. Petrinjak, HGI).

Due to the specific way of origin and subsequent fast erosion, there are larger or smaller occurrences of Aeolian sand on almost all the islands in Croatian part of the Adriatic Sea: from Susak and Unije in Kvarner Bay, to Dalmatian and Elaphiti islands near Dubrovnik, since the aeolian sands are found on the islands of Šolta, Brač, Hvar, Korčula, Mljet, Vis, Lastovo, Lopud etc. (source: Croatian Geological Survey, HGI, https://www.hgi-cgs.hr/geoloske-karte/).

The largest thickness of aeolian sand is found on Lastovo, while the largest areas covered by the sand are found in the eastern part of the island of Vis. Geological map of the eastern part of the island of Vis and the geo-trail Vis-Rukavac (illustration: N. Belić, HGI).

The unique locality of aeolian sand, which was created by the migration of sand dunes at the end of the last Ice Age, is located in Zlopolje on Vis. Strong winds moved sand downwind, and oblique layers of sand were formed by the migration of the dunes. In the past, the extraction of sand in Zlopolje opened a hole that allows a view to the unique fossil dune, which are one of the valuable sights of the UNESCO Geopark Vis archipelago. Oblique layers of the aeolian sand in Zlopolje on the island of Vis (photo: T. Korbar, HGI).

This unique locality is included as one of the interesting points in the geo-trail Vis-Rukavac.

However, as a key part of the field is privately owned, backfilling of the sand pit with stone and other materials is underway. Therefore, this regionally unique phenomenon of the UNESCO Geopark Vis archipelago, could soon become inaccessible to visitors and researchers. An abandoned sand pit in Zlopolje on Vis where the fossil dunes from the end of the last Ice Age are still exposed (photo: T. Korbar, October 2020).

In order to avoid unwanted bitterness associated with expected disappearance of the interesting geological phenomenon, it is important to emphasize that today these sandy fields are the best substrate and a key part of the terroir for the Plavac (Zinfandel) grape vineyards.

By visiting the UNESCO Geopark Vis, you can taste the autochthonous wine which in some sandy fields probably have different flavors, due to different portions of sand grains derived from weathering of the surrounding volcanic rocks during the ice ages. It should be noted that in the modern times the volcanic rocks are mostly covered by the sea, that is more than 120 m higher than during the last Ice Age, and there are only three localities where igneous rocks are still exposed above the sea level: Komiža Bay and the islands of Brusnik and Jabuka.

Thus, apart from the town of Vis, Komiža also has horses for the race, because there is aeolian sand fields on the island of Biševo. During the ice ages, Biševo was close to the source of “volcanic” material (Brusnik, Jabuka and some submerged former islands which are also built of igneous rocks) than Zlopolje, so there could be slightly more grains of the igneous minerals in the Biševo sands than on the eastern part of Vis island. Therefore, Bišovski plovac has a slightly different taste. However, this Plavac cannot be bought in any wine shop in the world, as well as some Plavac produced by small winemakers from Vis. So in order to taste and compare them you have to visit Vis. These are shades of tastes, so it’s best to evaluate the shades by yourself. 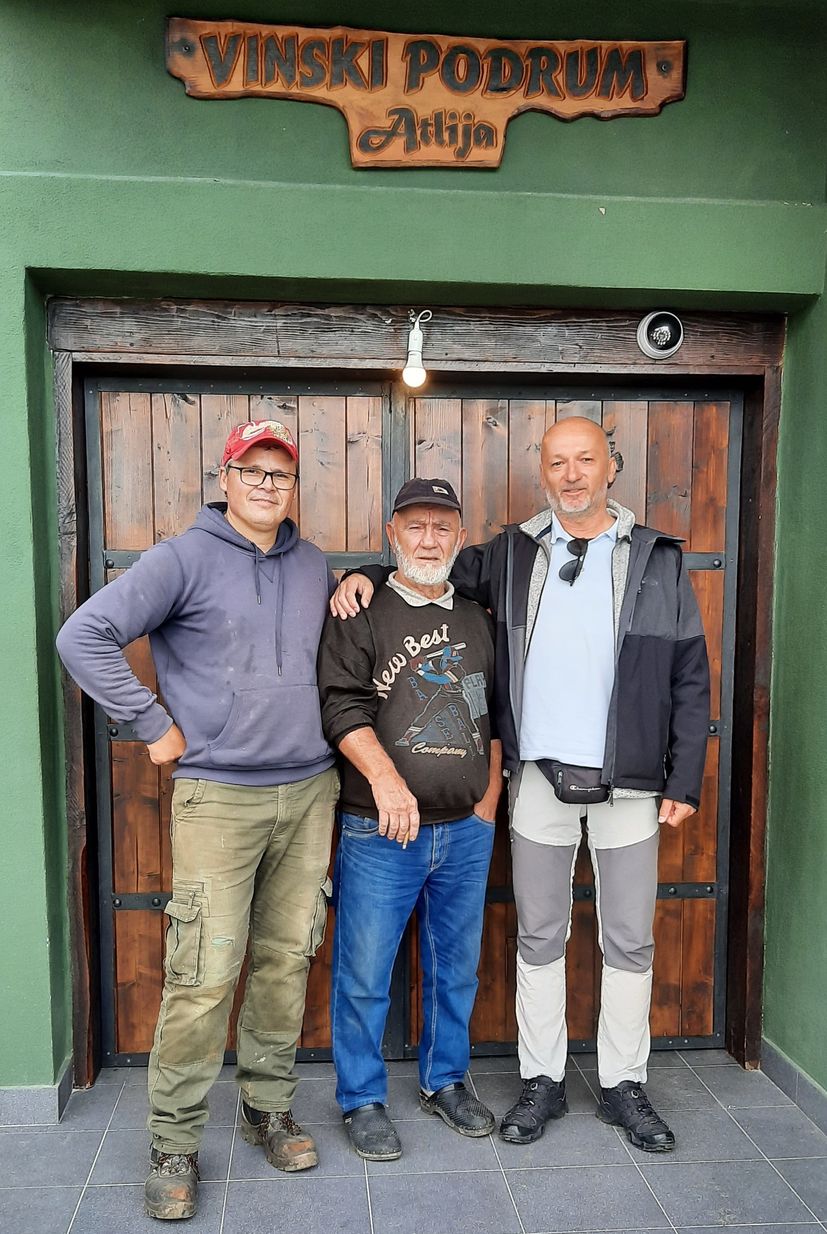 Apart from the fields, there is aeolian sand in places also at the sea. The rains washed the sand from the top of the island towards the sea, and the sea transforms it into the most beautiful and unique sandy beaches of the Vis archipelago: Porat and Salbunara. 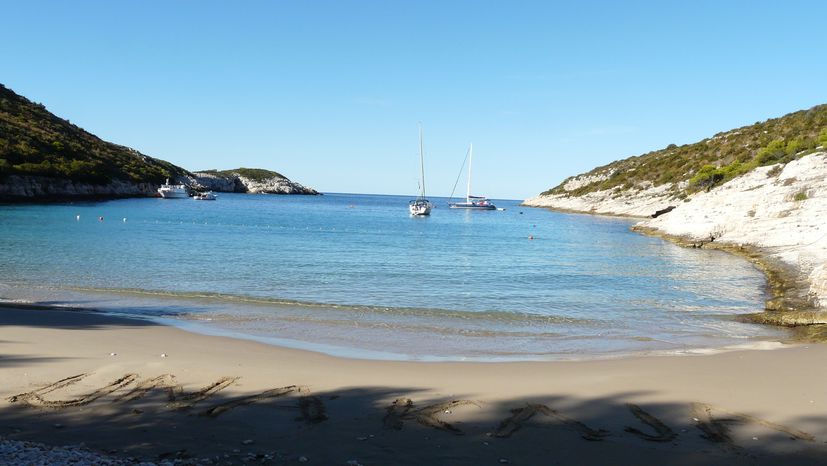 Porat, the most famous sandy beach on the island of Biševo (photo: T. Korbar, 2013). 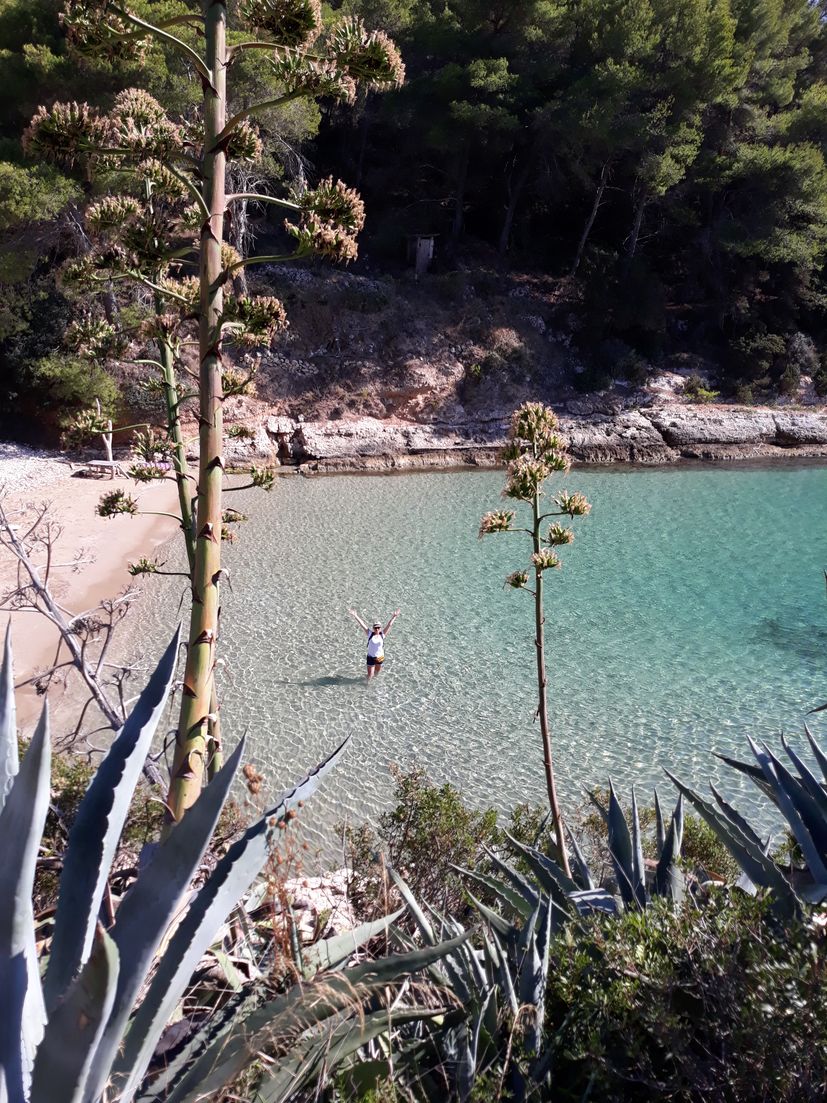 So, there is something to do on Biševo. In addition to the existing geotrails and the famous Blue Cave attraction, at the top of the island, in Polje, there will soon be new Info Center, which the Town of Komiža and its partners are building with the help of European money.

Therefore, a large number of visitors who come to Biševo in the summer months, instead of waiting in line for a tour of the Blue Cave, should focus on these other exceptional natural beauties of the island. Still, Biševo is most beautiful in the pre- and post-season, so don’t wait for the crowds, and take advantage of spring and early autumn, the seasons in which these remote islands offer the most.

So, when you visit Vis, visit the geotrails, or come to the island precisely because of them In addition to geology and geomorphology, unique gastronomic facilities (GEOfood) are waiting for you on these geotours.

You can find information about geotrails on the geopark website, on info-boards that are placed along the geotrails and in the local tourist offices. The most complete information and the insight into all geo-facts of the UNESCO Geopark Vis Archipelago, you can get in the visitors-center in Komiža.

Cheers, and enjoy the geo-experience!