Home » News » How I Became a Croatian Citizen – Step by Step

Recently we reported that obtaining Croatian citizenship for Croatians abroad was set to get easier as the Croatian Government announced it was to submit amendments to the Croatian Citizenship Act.

Until the amendments are passed in parliament, the old rules apply. So how does one apply now?

Jelena Žanko, a Croatian-American born to two parents proudly hailing from the Dalmatian region of Croatia, shared her experience of how she became a Croatian citizen on her blog Coastal Croatia. This is her story.

How I Became a Croatian Citizen

Did you know that even if only one of your grandparents or parents was born in Croatia, you’re eligible to obtain your Croatian citizenship? Assuming you can provide the required documentation, you may be one year away from becoming a dual citizen. The concept of dual nationality means that a person is a national of two countries at the same time and Croatia allows its citizens to hold foreign citizenship in addition to their Croatian citizenship. Massive perk alert: as Croatia is part of the European Union, you’ll also receive the privilege of EU citizenship. 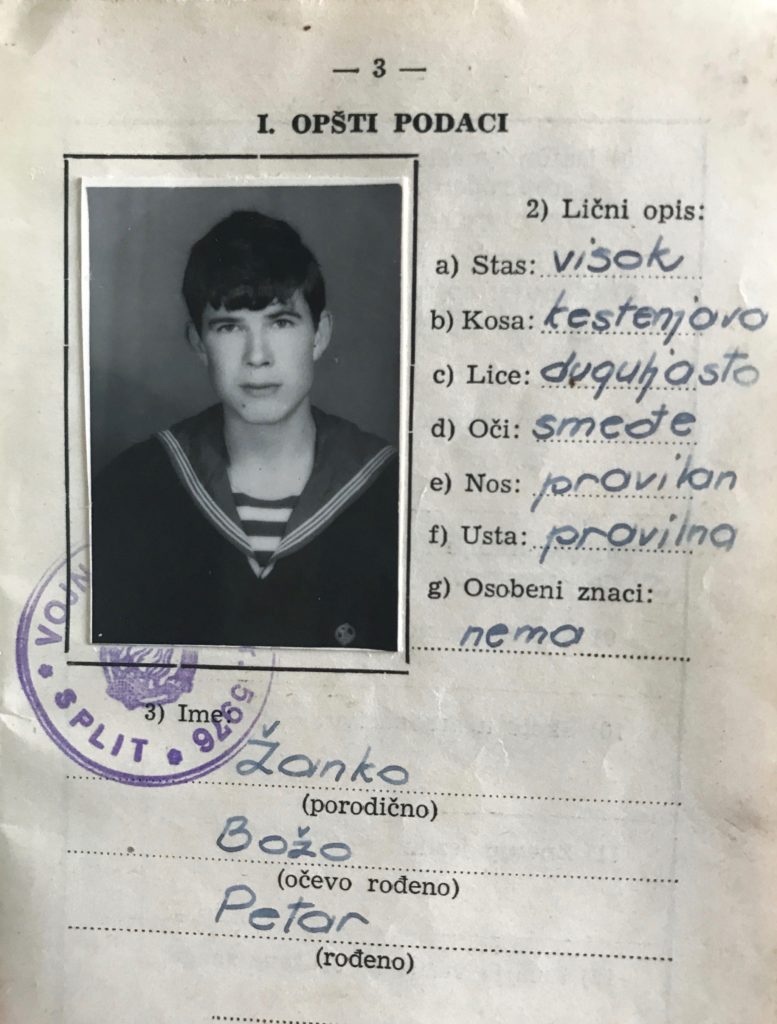 Interesting ‘details’ about my father, like that he’s considered tall!

I’m American by birth but Croatian by descent – both of my parents are Croatian-born immigrants – and I’d been itching to become a Croatian citizen for several years by the time I submitted my application at the consulate in Los Angeles. What took me so long? First, my parents had to obtain new birth certificates (rodni list), new Croatian citizenship certificates (Domovnica), and new marriage certificates (vjenčani list).

Though they’re ethnically Croatian, their original documents showed the now-defunct Yugoslavia as their country of birth. Once they basically became Croatian citizens themselves (ha!) and subsequently received their freshly-issued Croatian paperwork, their work was done. 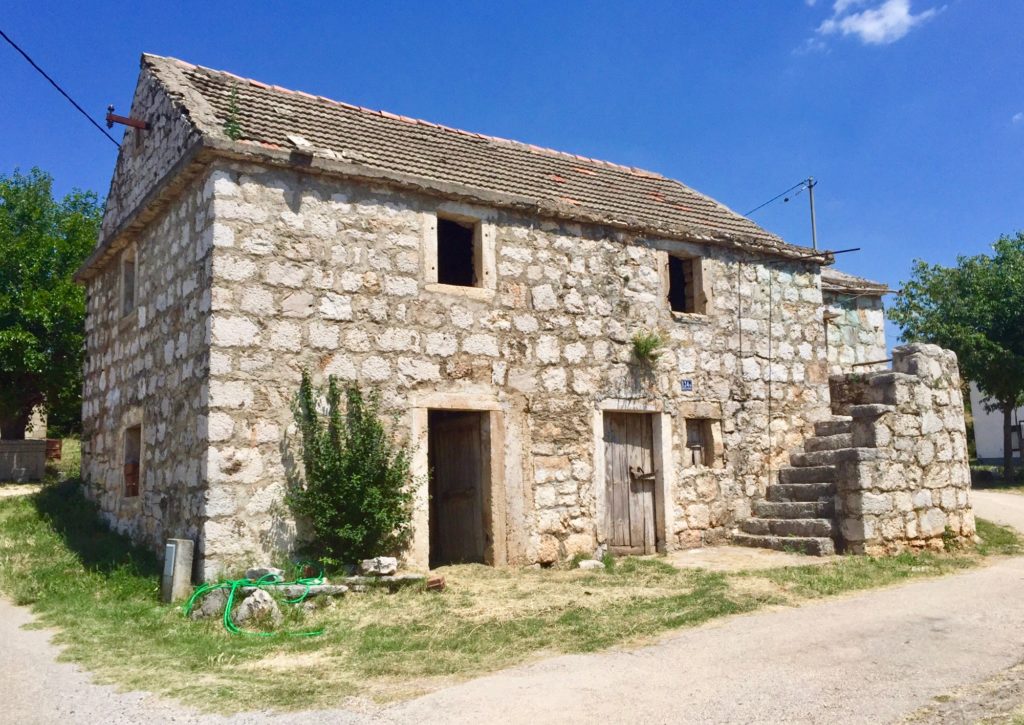 The house in which my father grew up in a village outside of Sinj, Dalmatia.

Next, I ordered a copy of my Missouri birth certificate online – it must be the long form version with your parents’ information included. And it has to be a fresh copy, as your birth certificate can be no older than six months at the time of your application submission. They’re sticklers for details, indeed!

Once you receive your birth certificate in the mail, it’s time to get an apostille! The apostille ensures that public documents issued in one signatory country will be recognized as valid in another signatory country. The sole function of the apostille is to certify the authenticity of the signature on the document; the capacity in which the person signing the document acted; and the identity of any stamp or seal affixed to the document. Since I’m born in the state of Missouri, I had to send my birth certificate to the Secretary of State’s Office in Jefferson City, Missouri.

If you have the time, the process is fairly straightforward and inexpensive: for me, it took $10 + a letter stating what country the documents will be sent to; a return address; and a contact phone number and email address along with the birth certificate. If you don’t have much time, overnight the documents and include a pre-paid overnight envelope for the way back. 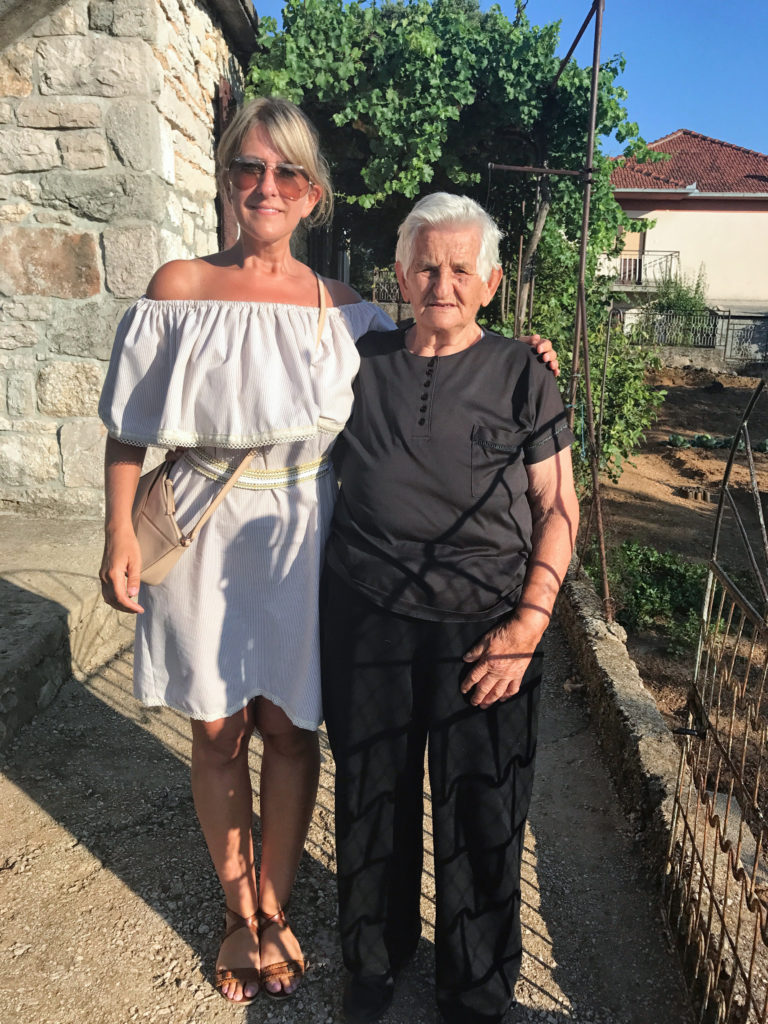 Saying ‘goodbye for now’ to my beloved maternal grandmother.

Whew! Are you still following along? Okay good, because there’s still plenty more to be done. So now that a week or so has passed, you should have your birth certificate with apostille document in hand. Super – next, it’s time to get those documents officially translated and notarized. If you don’t have a friend in the Croatian translation business, now you do: meet Boris, owner of Croatia Travel in New York City. He was able to translate my birth certificate and accompanying apostille in Croatia within just a few days. And conveniently, he offers notary services as well (and he can be reached at [email protected]). 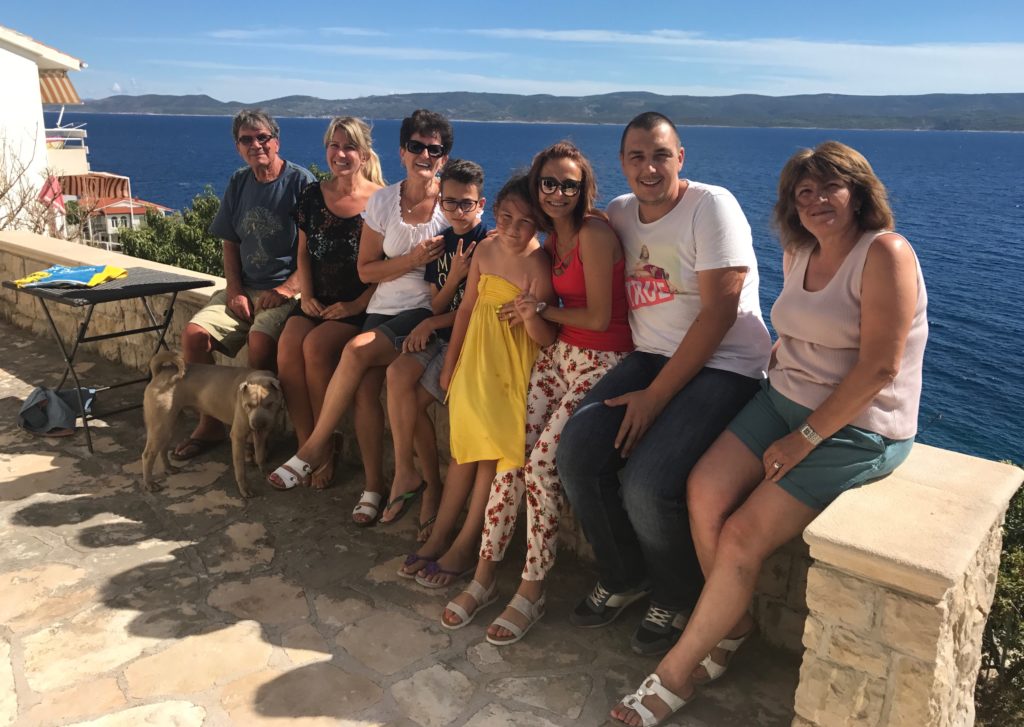 Spending time with family in Croatia.

Last step (for me anyway, as the reqs are slightly more relaxed for those with both parents born in Croatia): write a biography explaining why you are seeking Croatian citizenship along with an account of your personal connection to the country and the culture. I found this exercise to be fairly easy; the words just spilled out of me as they came straight from the heart. I first visited Croatia as a 3-year-old girl and fell even more madly in love with the country as an adult. So much so, that I purchased a home on the coast with a panoramic sea view and an endless bounty of ripe figs that I enjoy sharing every summer with my family and closest friends.

As my cousin Julie is 100% fluent in Croatian, she made some edits to my bio because of course, I wanted it to be perfect and her Croatian is exactly that. I’ve heard that if you’re not born to two parents from Croatia, you may be required to take an exam testing your knowledge of Croatia and inherently, your Croatian language skills as the test is written in Croatian. However, it was recently reported that soon the Croatian language/culture exam will no longer be required to obtain citizenship! 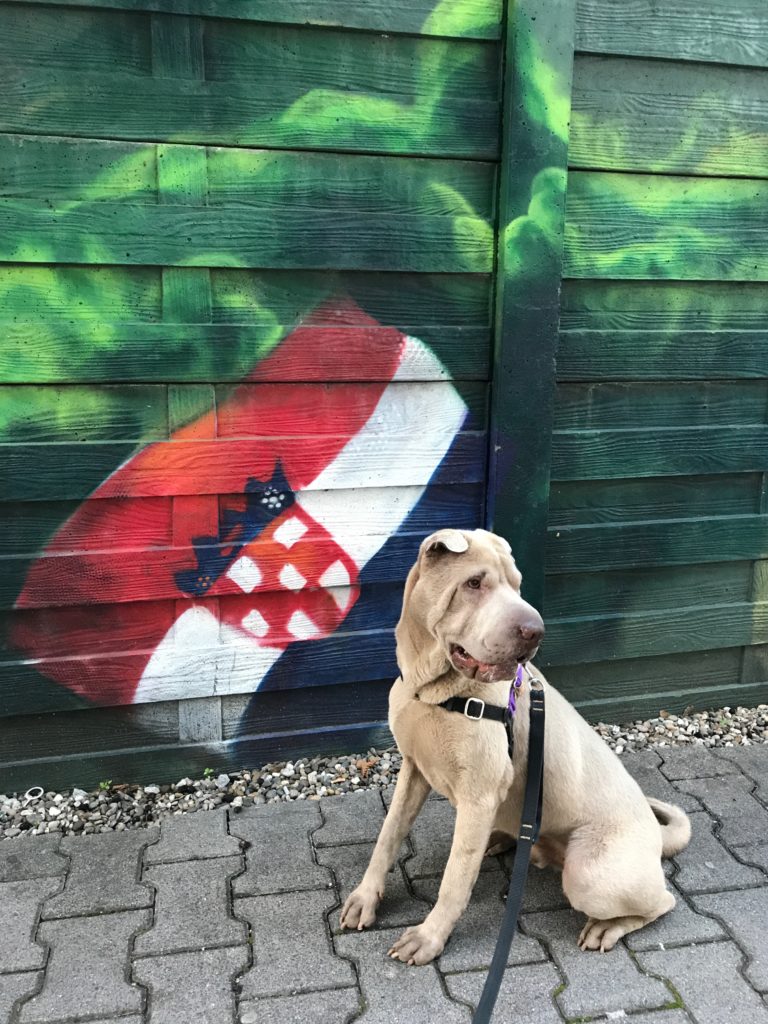 Croatia is my dog Sasha’s favorite place in the world!

By this point, I had accumulated an extensive collection of documents: parents’ Croatian citizenship certificates, birth certificates and wedding certificates; my long-form birth certificate with apostille and translated from English to Croatian; my bio written in Croatian; and this daunting application which requires some specific dates and information (best filled out alongside your parents/grandparents who were born in Croatia). Once this form has been completed, bring everything along with your passport (to prove identity) and a check for $73 (price at press time) to your nearest Croatian embassy or consulate! Don’t forget to check their business hours ahead of time as the windows can be quite specific for drop-ins. 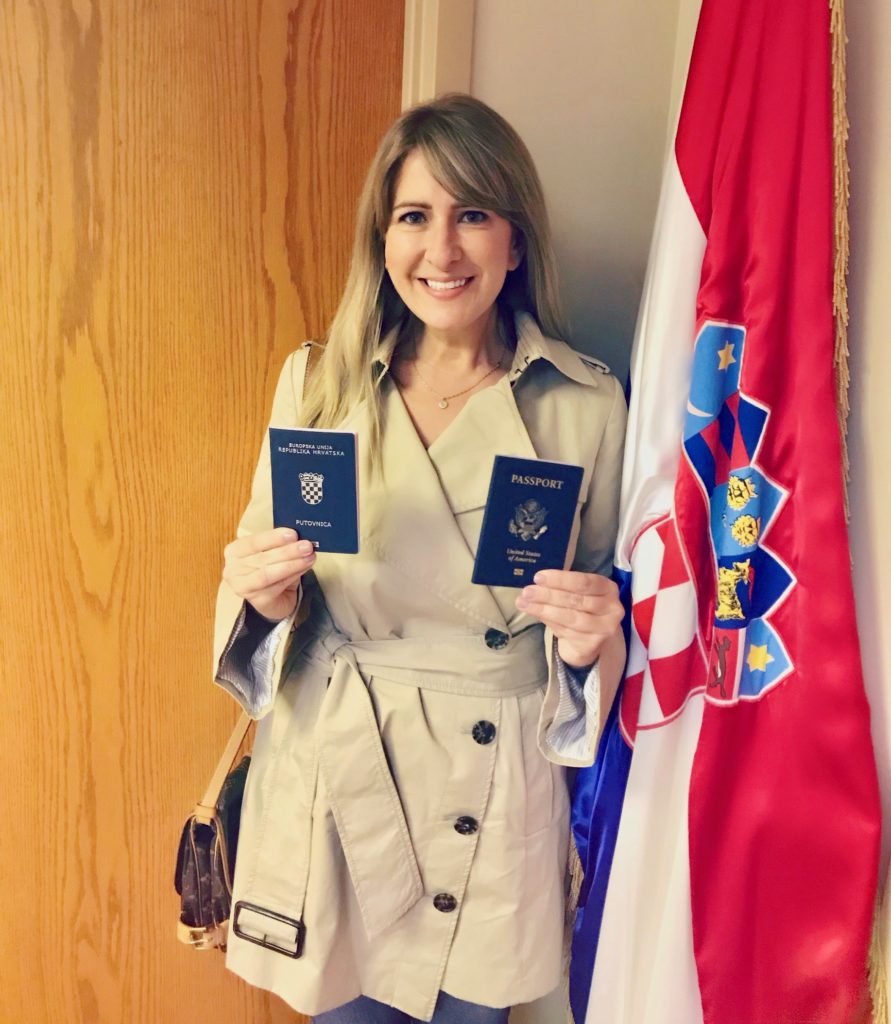 Picking up my passport at the Croatian consulate in Chicago. Such a proud day!

Now what? Most likely you’ll end up waiting a year before receiving an update on the status of your application (give or take a few months). But when you do finally receive that email, oh how sweet it is! A few days later, I visited the consulate to apply for my passport and domovnica. For those items, I wrote a check for $125 (as of September 2017) and needed to present the letter or email confirming my citizenship along with my U.S. passport and a set of passport photos. A Croatian passport and/or domovnica can also be requested by mail if you don’t live close to an embassy or consulate.

I hope this helps demystify the intimidating process of obtaining your Croatian citizenship by descent. Best of luck, and don’t forget your patience and attention to detail… and perhaps a shot of rakija!

You can check out other stories on Jelena’s blog Coastal Croatia.