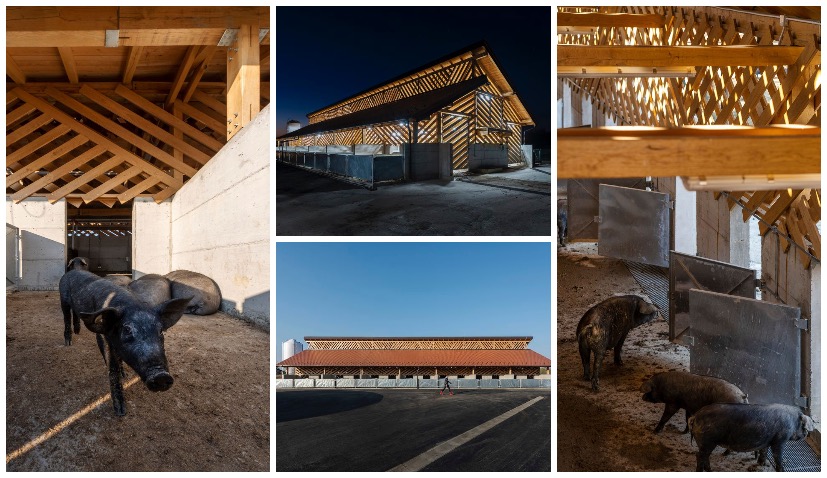 Located near Donji Miholjac in Slavonia, the Black Slavonian Eco Farm project is the investment of the company Sin ravnice, with one of the co-founders of the company being Croatian football international Domagoj Vida.

Black Slavonian pig is an autochthonous Croatian breed. In the 19th century, it was the most commonly farmed breed in Slavonia. During the 20th century, the number of individuals declined steadily, to the extent that it was declared an endangered species in the 1990s.

According to the official data, at one point, this number was reduced to only 50 animals. 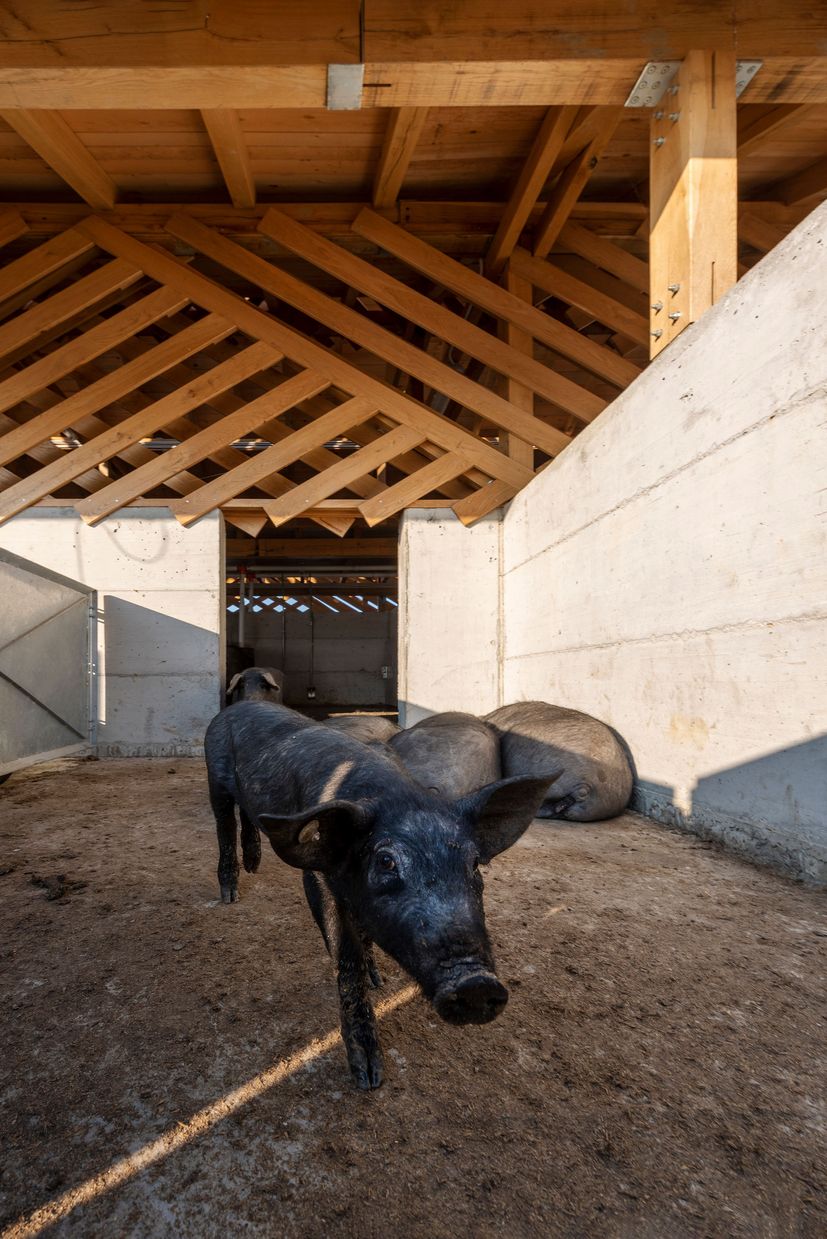 With the awareness of climate change and healthy life on the rise, interest in this specific breed has returned over the past ten years. One of the first professional breeders to start farming this neglected breed was company Sin Ravnice from Cret Viljevski near Donji Miholjac.

Initially, the pigs were farmed organically entirely in the open air, without any stables or canopy, since the black Slavonian pig is an extremely resistant and durable breed.

However, after a few years, as the number of individuals grew, the breeder realised that they had to provide some form of controlled farming, make the conditions easier and offer shelter to the pigs. 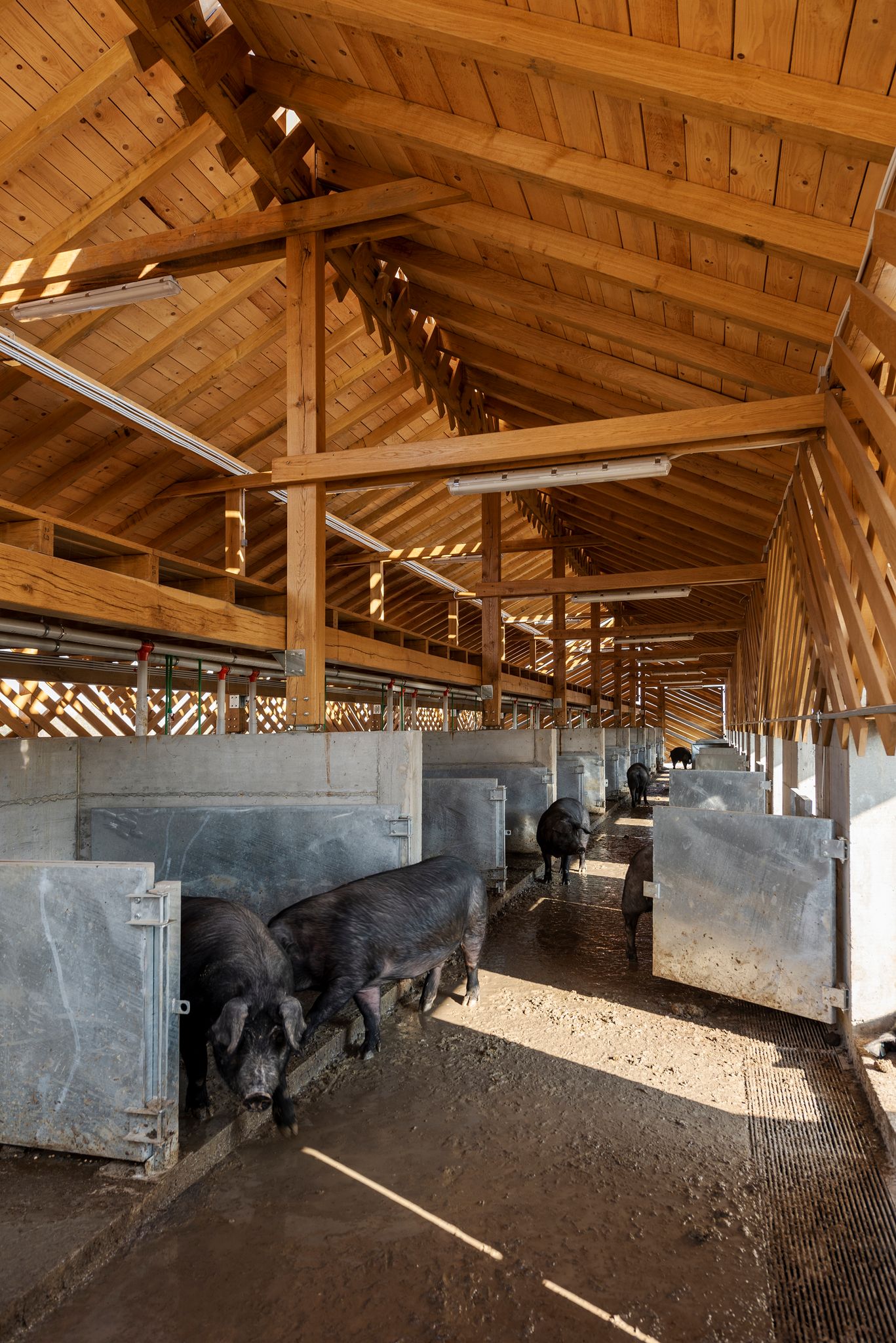 The architectural project brief required a design of a farm according to the highest standards of organic livestock farming. In addition, it was also necessary to anticipate the potential expansion of the farm should its capacity grow in the future. The stable would primarily be intended for year-round housing of sows (female pigs with piglets) with smaller outdoor pens, while the other pigs would stay in the stable only during the coldest part of the year. 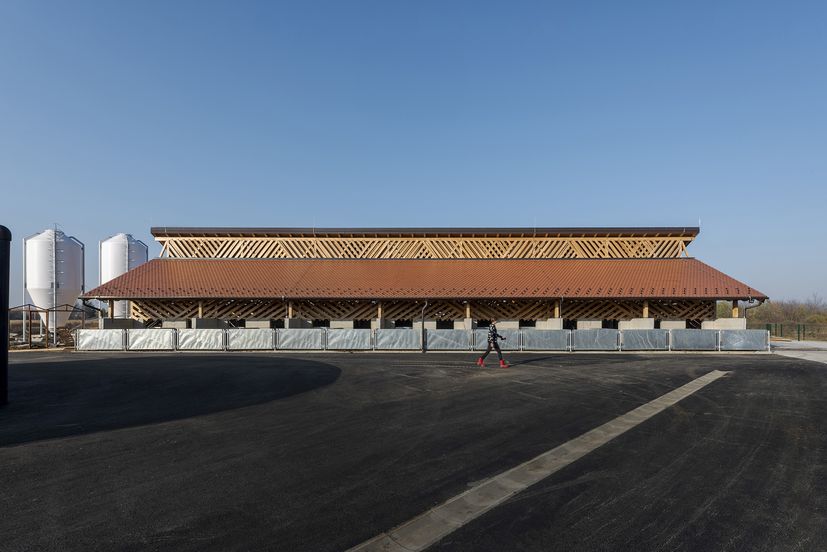 Given the needs of the pigs, a general disposition of the stables established itself near the western boundary line in order to avoid the county road on the eastern boundary, and to provide as large as possible outdoor area for pigs.

The farm urban design concept proposes two identical complexes. The stables are positioned at a right angle in a rotated coordinate system in relation to the axis of the north-south plot, which forms farmyards with manure pit in the middle, allowing for smooth communication towards the pens and easier manipulation of service vehicles. 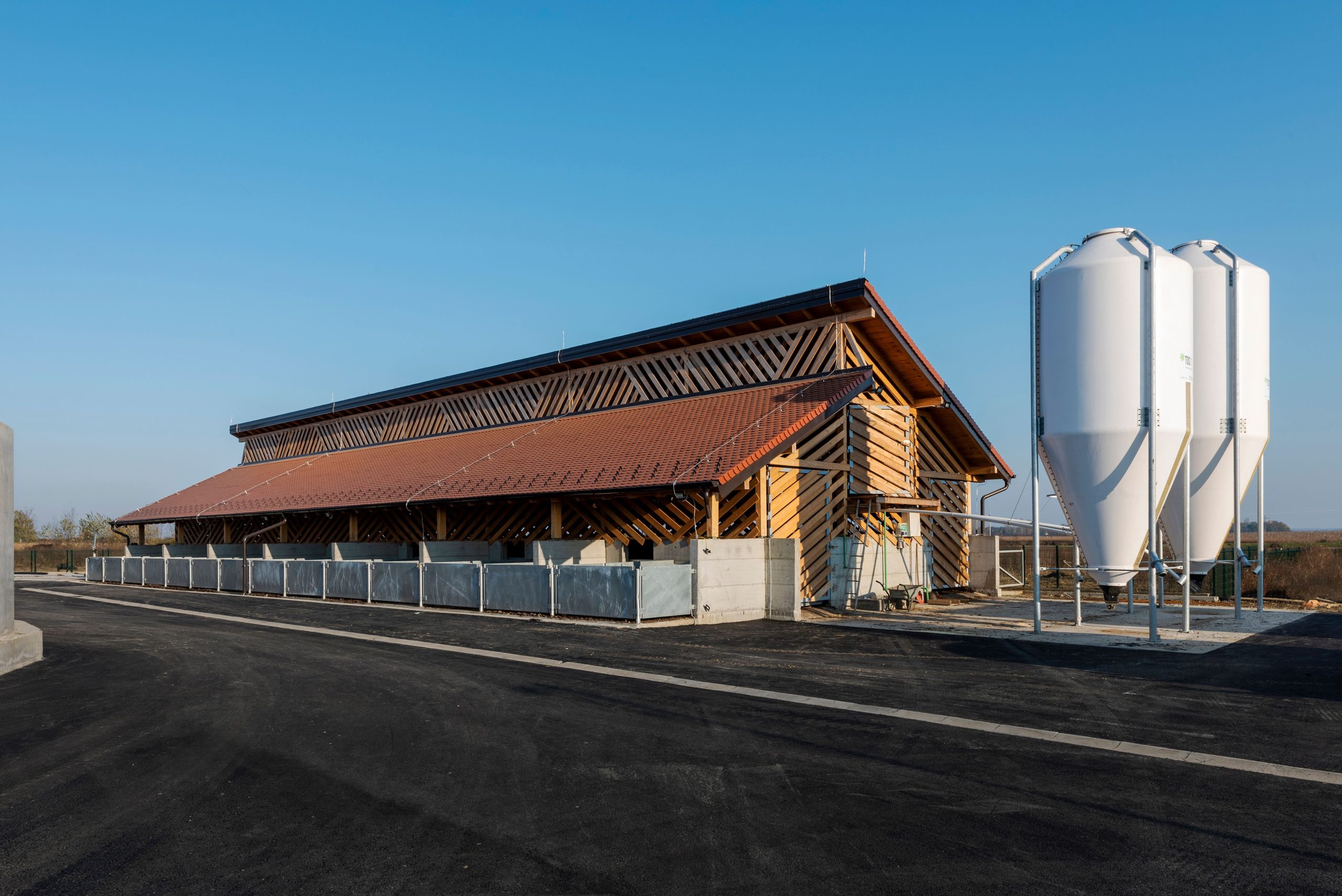 CONCEPT OF FORM AND FUNCTION

The main factors that influenced the architecture were the optimisation of the breeding process and the best possible housing for the pigs.  The building is primarily designed by its function, i.e., optimisation of function with the intent to keep the buildings within the confines of the rural Slavonian context and the traditional farm buildings in human and animal scale. 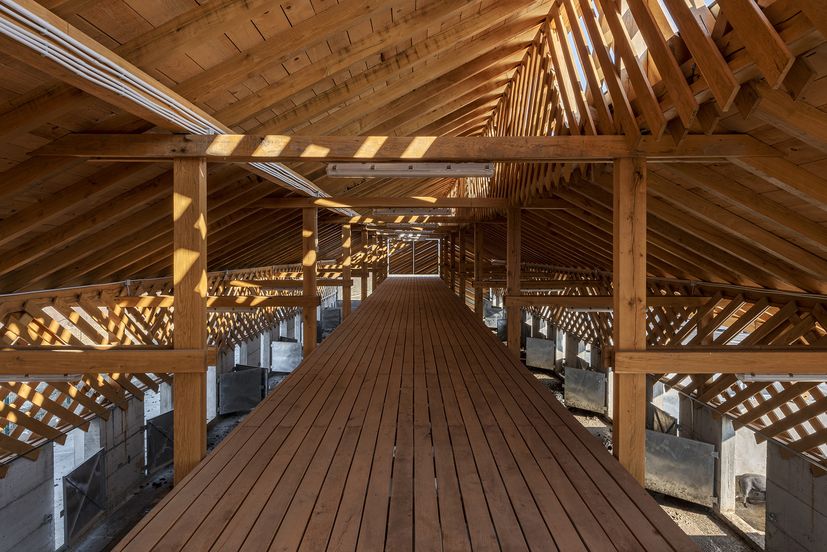 Usually, this type of building is built as a low-rise with livestock spaces and a passage in the middle.  Straw storage for animal bedding should be right next to stable space. The central passage then serves for feeding the livestock, spreading the bedding, and removing manure after the cleaning. 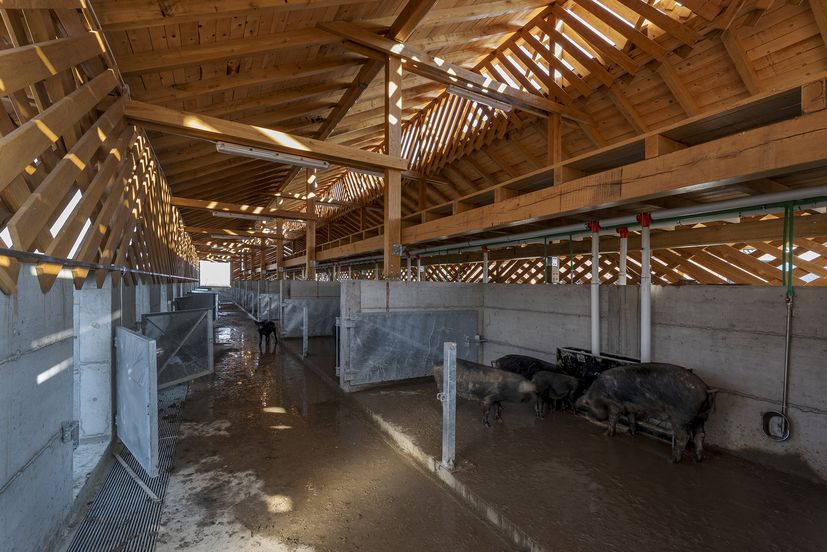 This project takes it one step further from the usual solutions, eliminates the central passage and creates a gallery which, in addition to accessing the stalls, serves for storage of animal bedding and feed; the use of space is rationalised and the breeding process optimised, also minimising the disturbance of pigs. Moreover, the need to transport the animal bedding has been eliminated, as it is planned to store it in the same building.

Another key part of process optimisation is the introduction of movable partitions that have made it easier to maintain the building, but also to create different scenarios for its use. 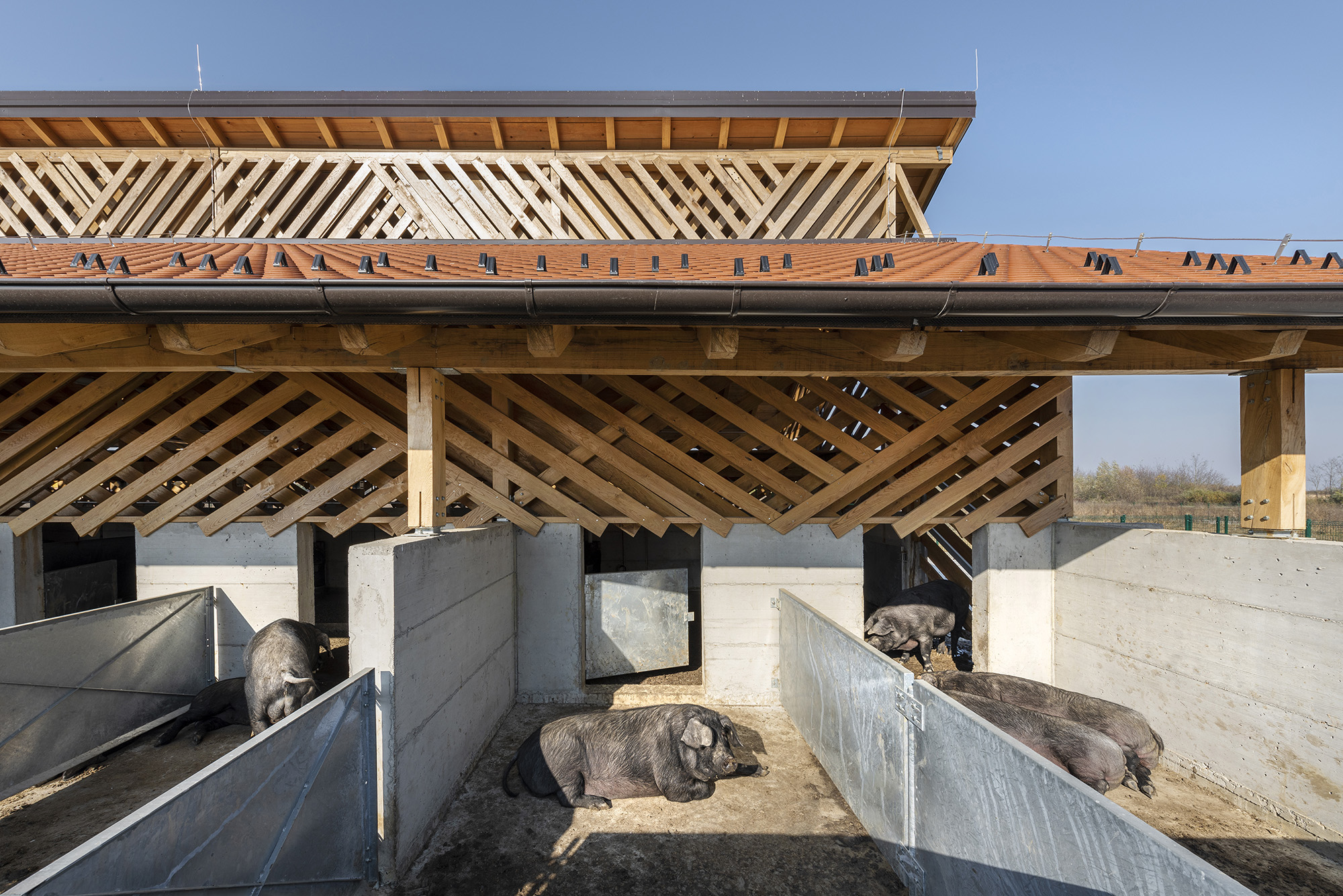 The scenarios enabled by the partitions are adapted to the life within the stable where areas are reduced and enlarged depending on the needs of the pigs, from the smallest stall for sows with piglets to a single area where all the pigs are kept together.

The summing up all of these parameters and taking into account the proportions of a man, animal and machine, resulted in the cross-section of the building maximum height in the central part.

The pitched roof panes have been broken and dislocated in the ridge, allowing for additional lighting and ventilation of the bedding storage on the gallery. The extension of the roof pane formed an eave overhanging the outdoor area for the sow with piglets. 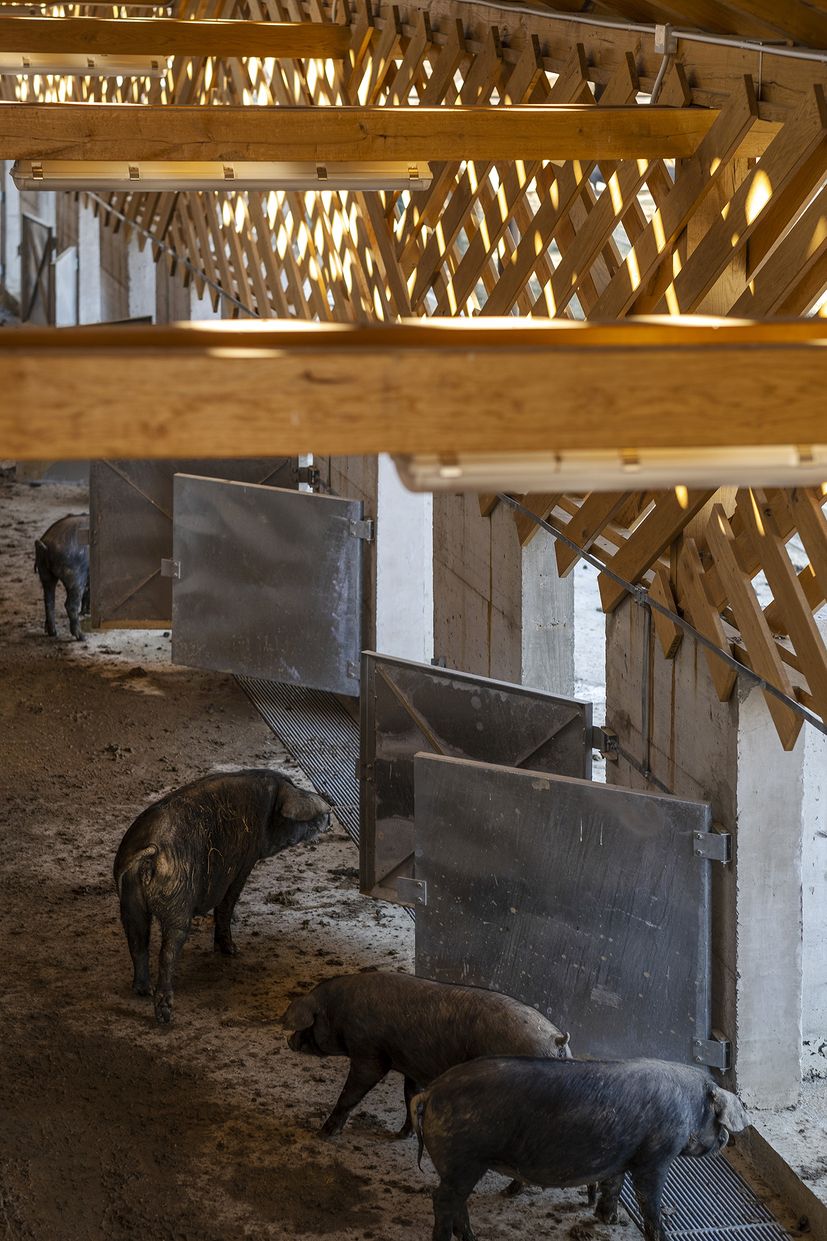 An important factor for the choice of materials was the resilience of the elements that are in direct contact with porcine animals who are fond of rooting, digging and biting everything they come across. With this in mind, concrete was selected for the base with galvanised steel partitions with wooden structure above it and wooden façade lining, and finally, the traditional and commonly used flat tile as a roof cover.  Materials are simple, rough, and directly subordinate to the function and context.

Apart from the bare function, the appearance of buildings is conditioned by the context of the rural Slavonian region, which is visible in the geometry of the roof, the cover of the panes and in the material and method of treating the façade. 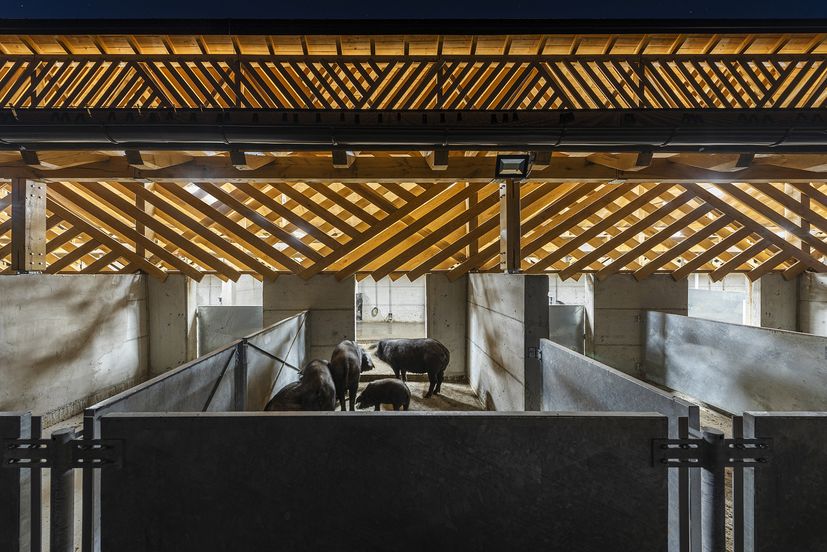 The transparency of the façade does not come from the material, but from its geometry.  The sequence of wooden laths of Slavonian oak with interchangeable full and empty fields in two diagonal directions and two plans create a distinctive structure.

This structure primarily serves as ventilation and protection from the sun, but also as a reinterpretation of the geometry of wooden façades found on numerous vernacular outbuildings in Slavonia. Such reinterpretation connects an outbuilding designed by contemporary standards with its environment and built heritage. 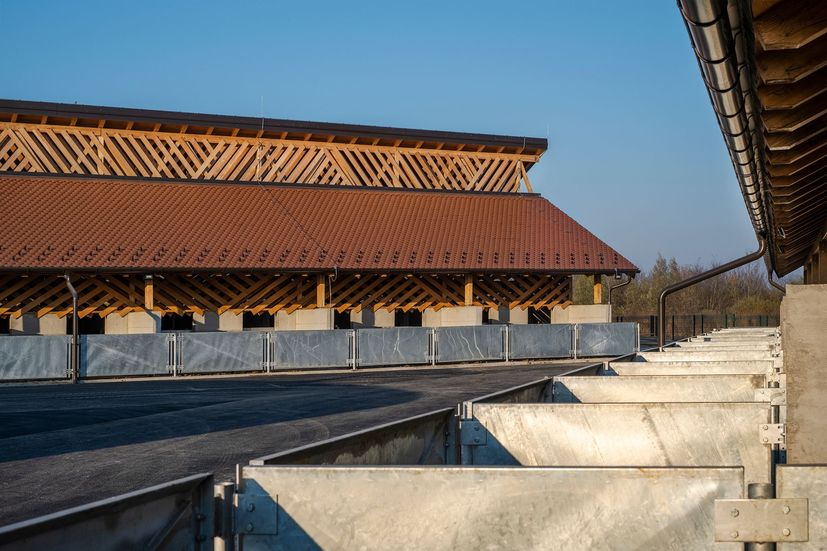 The project, which has been published in several of the most important international architecture magazines, was this year one of the 4 nominees for “Viktor Kovačić Award”  – an annual award by Croatian Association of Architects for the best architectural project. 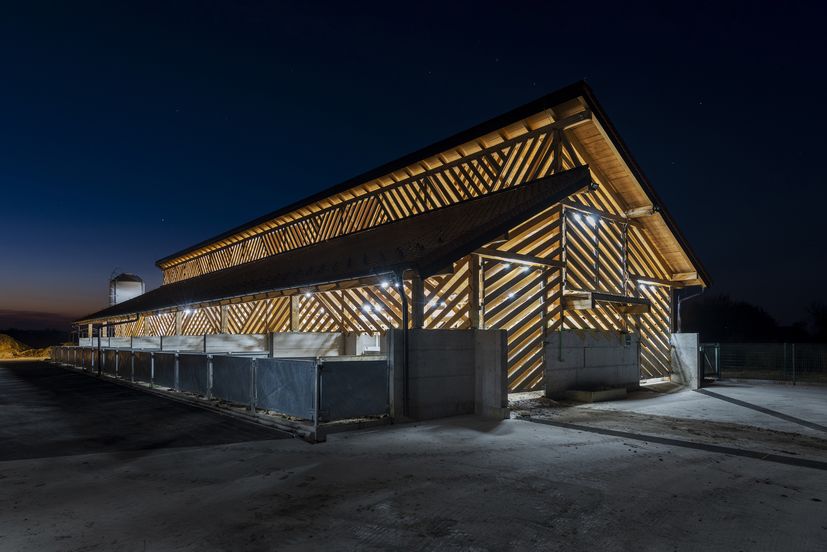 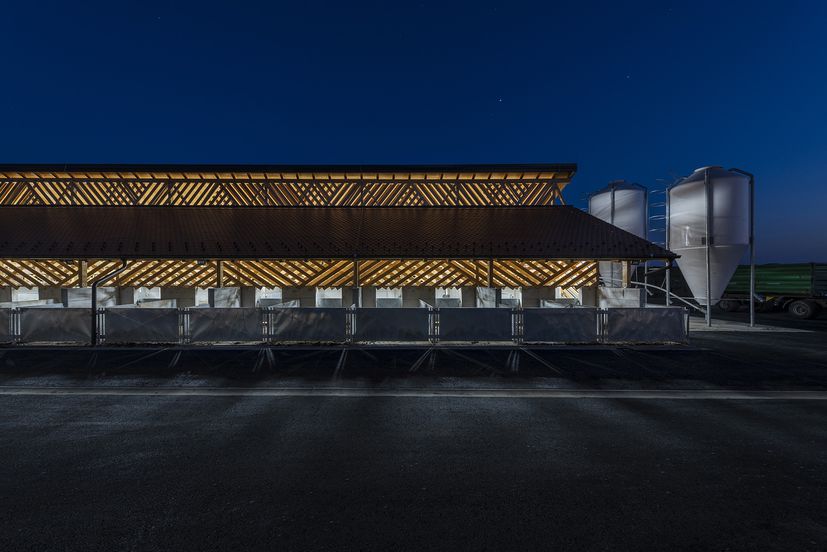 This is SKROZ architecture’s second large project in terms of “housing for animals”, the previous one was “Chickenville“ back in 2019, an eco friendly poultry farm.