Croatia achieved their first goal last night, a convincing 7-1 win against Malta to set it all up in Split against Russia in the final group match.

A win will see Croatia qualify for Qatar, a loss or draw and it will be off to the play-offs. After last night’s match, coach Zlatko Dalić was quick to praise his players.

“Congratulations to the boys on their approach and engagement throughout the game, the most important thing was to take the game against Malta very seriously. And we did, the players gave their maximum, which resulted in a convincing victory. The most important is the three points, we got what we wanted, a victory against Malta and a big game in Split,” Dalić said.

Last night Dalić who handed out a debut to Lille goalkeeper Ivo Grbić and barring any unforeseen injuries, he will keep his place for Sunday’s big match.

“We said that those players who are in the best form will play against Malta, and Grbić is in better form than Livaković at the moment. Dominik has not lost his place, he is still the number one goalkeeper in the Croatian national team, but we decided that Grbić would be in goal. That is the decision we all stood behind, Grbić has our great support and he will be in goal in Split as well. And one more thing, the players who came on in game really contributed to the final result and because of them we didn’t give up for a second,” Dalić told HNS. 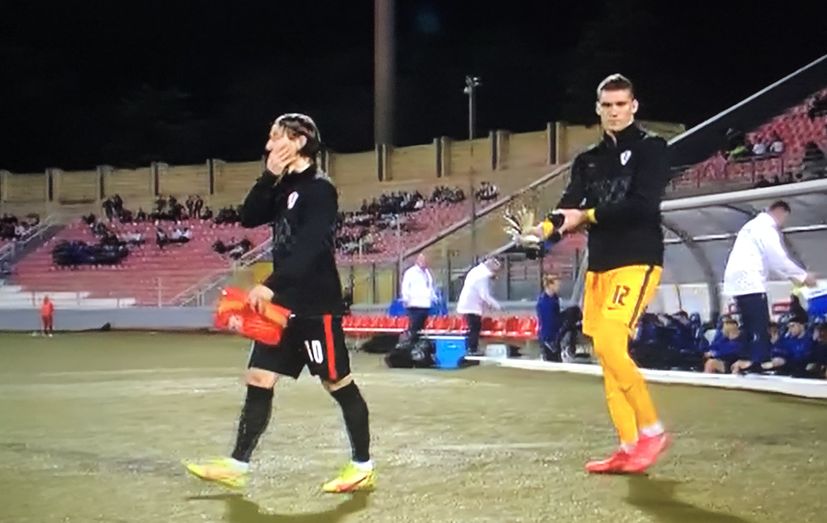 Born in Split, the 6 ft 5 in keeper started his career at Hajduk Split before he moved to Zagreb-based club Lokomotiva in 2018. In August 2020, Grbić signed for Spanish club Atletico Madrid and made his debuted in a Copa del Rey 3–0 victory over Cardassar.

After winning the 2020–21 La Liga with Atlético, Grbić was loaned out to French champions Lille. He made his Champions League for debut for Lille in September.

Dalić also said it was important that he had the opportunity to rest some key players last night.

“We already replaced Brozović at half time, who has been playing in the rhythm of Wednesday-Sunday at Inter for seven or eight games, and he had a yellow card. We systematically changed Modrić, Perišić and Kramarić, and later Pašalić. If we could, we would have rested more players, I’m sorry we couldn’t introduce Sučić and Stanišić, but we rested those who needed it the most. It is good that Juranović played the whole game because he plays left back at Celtic, Majer played much better when he moved to the middle, and Vlašić got the minutes to return after a period of not playing or training. In the end, we fulfilled everything we planned. We analysed the Maltese game well, we knew they played a lot with the goalkeeper, we prepared for it and managed to score a few goals that way. We were superior, dominant and authoritative,” Dalić said, before looking ahead to Sunday’s game.

“We all live for such matches, such an atmosphere is experienced once or twice in a career. Regardless of the fact that all our players play in big clubs, it is completely different when they play in the national team. It is pride, passion, emotion and patriotism. It is something that has no price. We have to prepare well for the match with Russia so as not to burn out in all this. However, the matches against Hungary and Slovenia showed that we play even better in such an atmosphere. If Poljud could take one hundred thousand fans, I believe that there would be that many of them in Split on Sunday. Russia has a new coach, who brought new energy and changed the team, gave a chance to good young players. We know what awaits us and how to prepare to get Russia. If we play like in the last six games, I have no doubt in our triumph,” concluded Dalić.