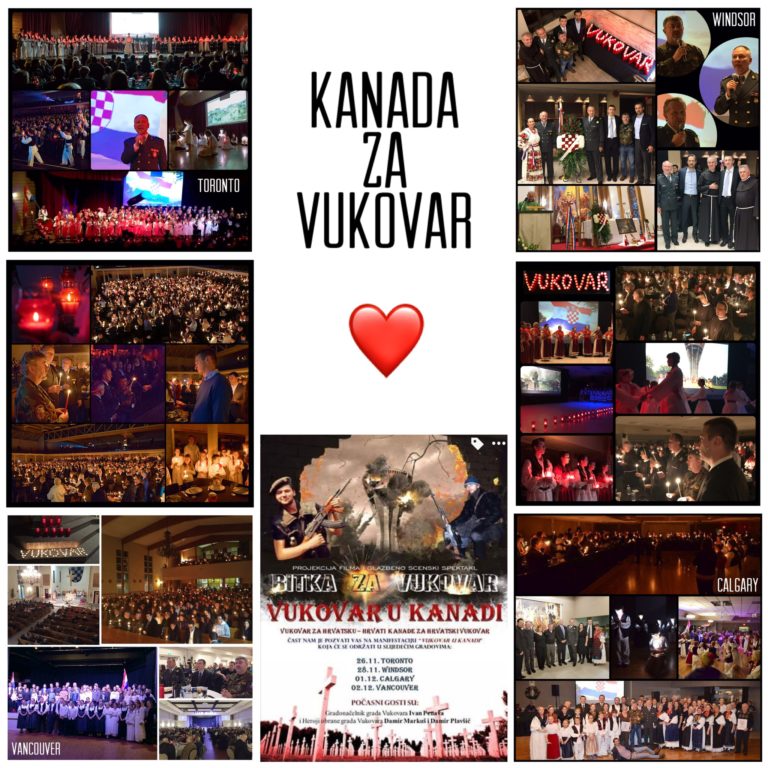 Croats in Canada unite for Vukovar

This past week, thousands of Croatian-Canadians united across Canada by attending community events to remember the victims of Vukovar and the Homeland War, pay homage to Croatian veterans, and welcome to Canada the Mayor of Vukovar, Ivan Penava, and three Croatian war veterans – Damir Plavšić, Damir Markuš and Viktorin Jurić-Paša, the Canadian-Croatian Chamber of Commerce reports.

Vukovar is a symbol of the Homeland War and the resistance of the Croatian people and their struggle to establish an independent Croatian state since the 7th century. The town, which was under siege and full-scale attack for 87 days by as many as 36,000 members of the Yugoslav People’s Army (JNA) and various paramilitary forces from Serbia between August and November 1991, was defended by some 1,800 poorly armed soldiers and civilian volunteers. Up to 12,000 shells and rockets were fired into the town on a daily basis, marking the Battle of Vukovar as the fiercest and most protracted battle witnessed in Europe since 1945. 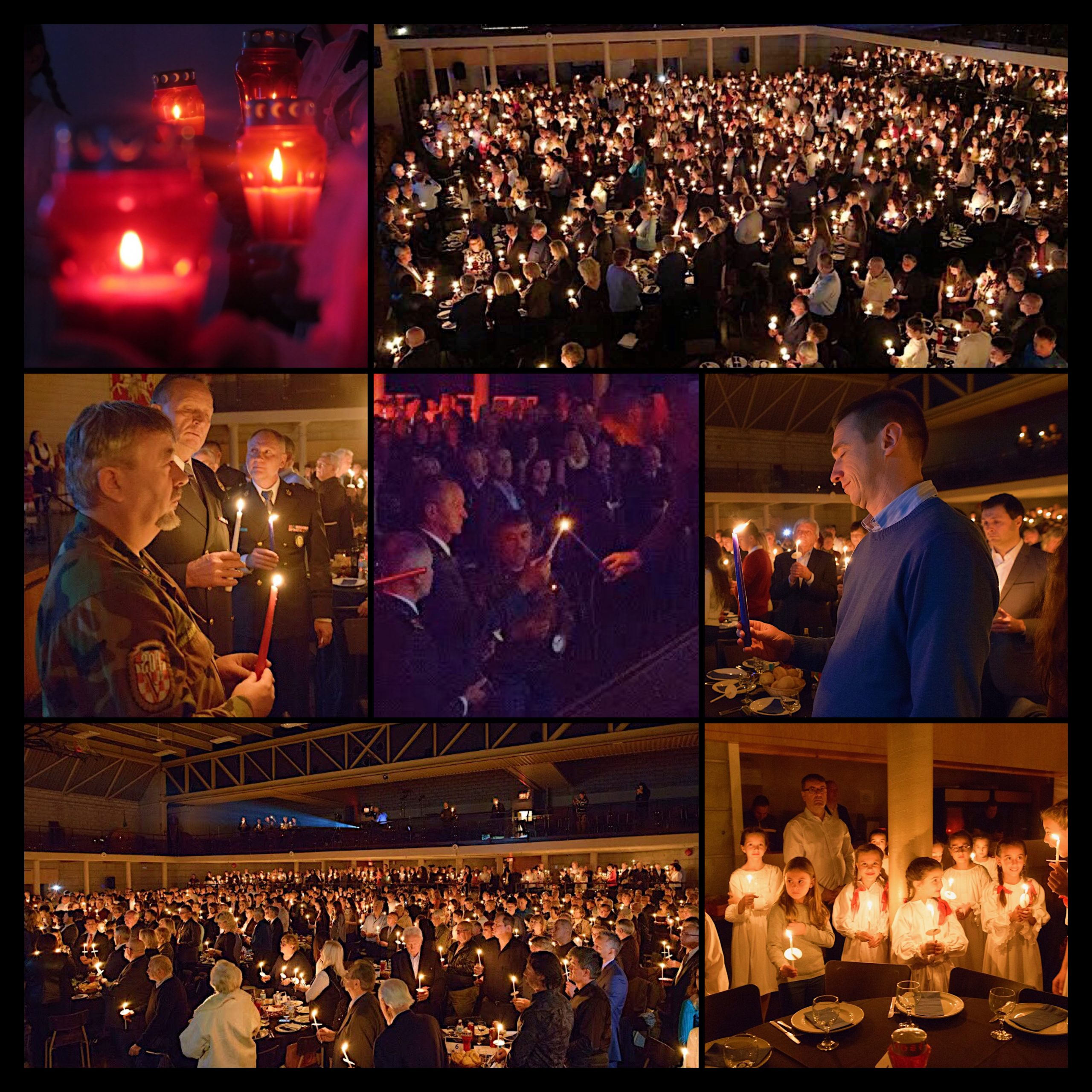 Upon the fall of Vukovar on November 18, 1991, the town was ethnically cleansed of its non-Serb population, with several hundred soldiers and civilians massacred or having disappeared and some 20,000 inhabitants having been expelled. The courage, heroism and sacrifice of the greatly outnumbered and lightly armed Croatian defenders exhausted the JNA and was a turning point in the Homeland War.

Given the reality that many Croats living abroad may not have the opportunity to visit Vukovar and taking into account its significance in Croatia’s past, present and future, the Canadian-Croatian Chamber of Commerce (Chamber) welcomed the opportunity to coordinate the Canadian tour of the musical-theatric production “Battle of Vukovar – How We Defended our Town and Croatia”. Through video, narration, and Croatian folklore songs and dance, the spectacle, which was produced by Damir Plavšić and Damir Markuš, presented the struggle of Croats living in Vukovar and Croatia during the Homeland War and educated, in particular, the large number of youth in attendance about this tragic episode in Croatian history. 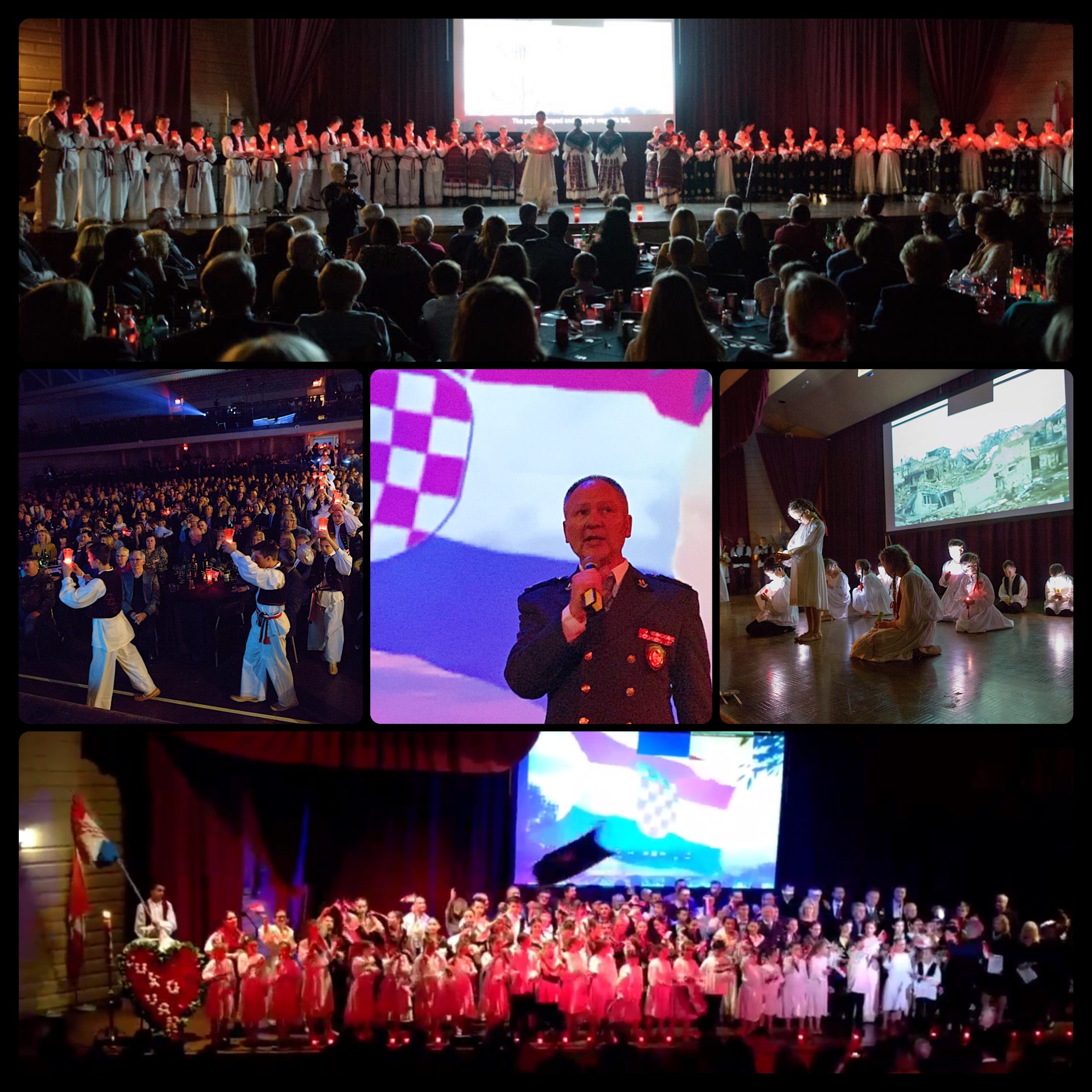 Mayor Penava, who accepted the invitation of the Chamber to formally visit the Croatian community in Canada, took the opportunity to personally express his gratitude and appreciation to Croatian-Canadians for their continued support over many years (as well as their contributions to the the Vukovar Water Tower restoration project in respect of which he provided an update) and shared his insights relating to life in Vukovar today.

The events, which were organized in Toronto/Mississauga, Windsor, Calgary and Vancouver by local volunteers, received overwhelming support from local Croatian communities, including individuals, parishes, folklore ensembles and other local Croatian organizations, which was evidenced by participation levels of attendees and volunteers, the emotions expressed, the level of attention by attendees at, and the level of preparation by performers and volunteers for, each of the events. 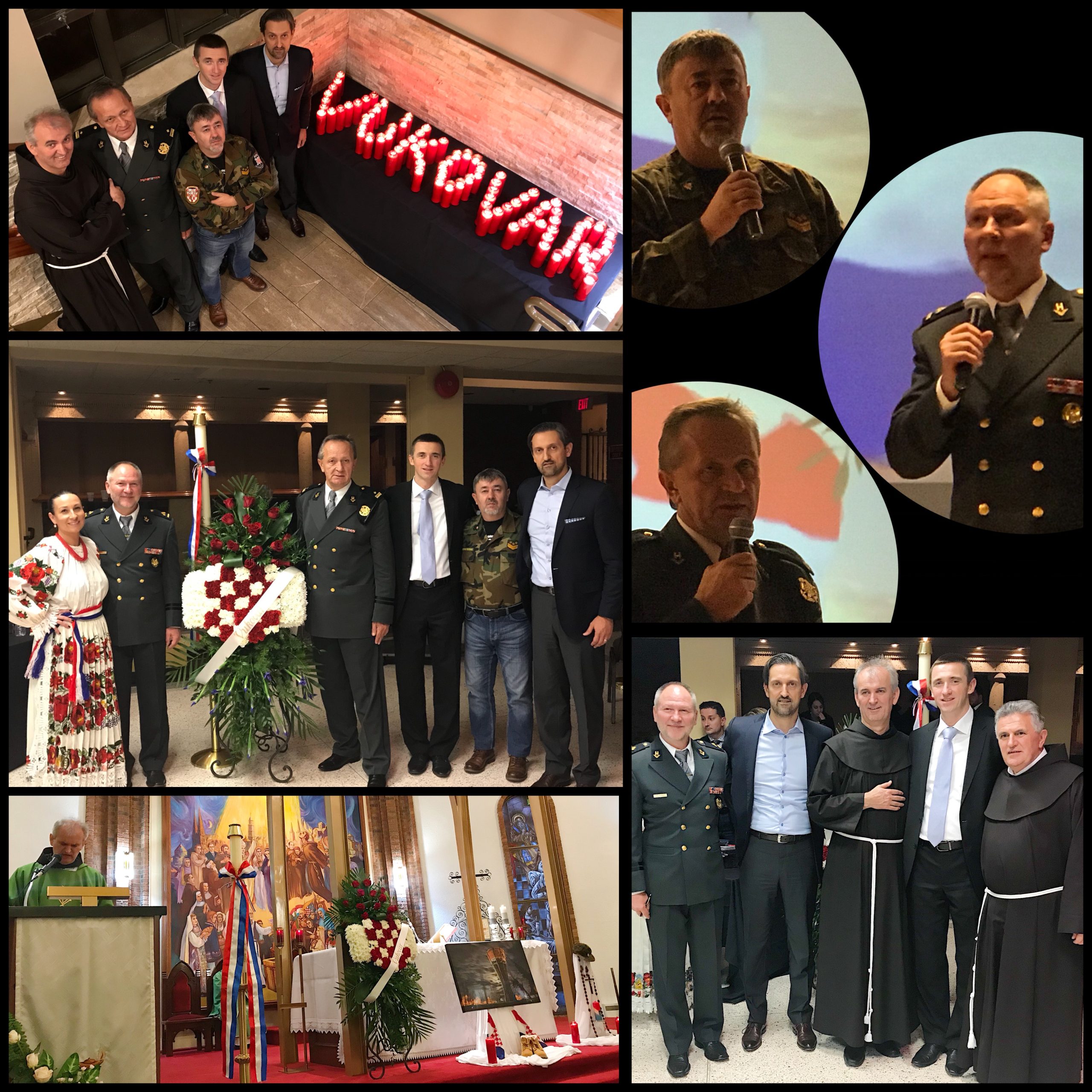 Commemorative masses were held before packed parishes at Queen of Peace (Croatian Franciscan Centre) in Norval, St. Francis of Assisi Croatian Church in Windsor, and Immaculate Heart of Mary Croatian Roman Catholic Parish in Vancouver. The mass at Norval was co-led by Fr. Marko Puljić and Fr. Jozo Grubišić as well as clergy from Oakville (Mons. Ivan Vukušić) and Mississauga (Fr. Tomislav Kasić), and was attended by parishioners from the neighboring Croatian parishes – a true show of unity.

The Custos of the Croatian Franciscans of USA and Canada, Fr. Joe Grbeš, even made a special trip from Chicago to join Fr. Ljubo Lebo in Windsor and to show his support. Finally, Fr. Slaven Litre and Fr. Dujo Boban led mass in Vancouver, which included a symbolic candle lighting ceremony and moment of silence, which was also carried out in the other cities, with nearly 1,000 candles being lit in the auditorium in Toronto/Mississauga – a moment to be remembered. 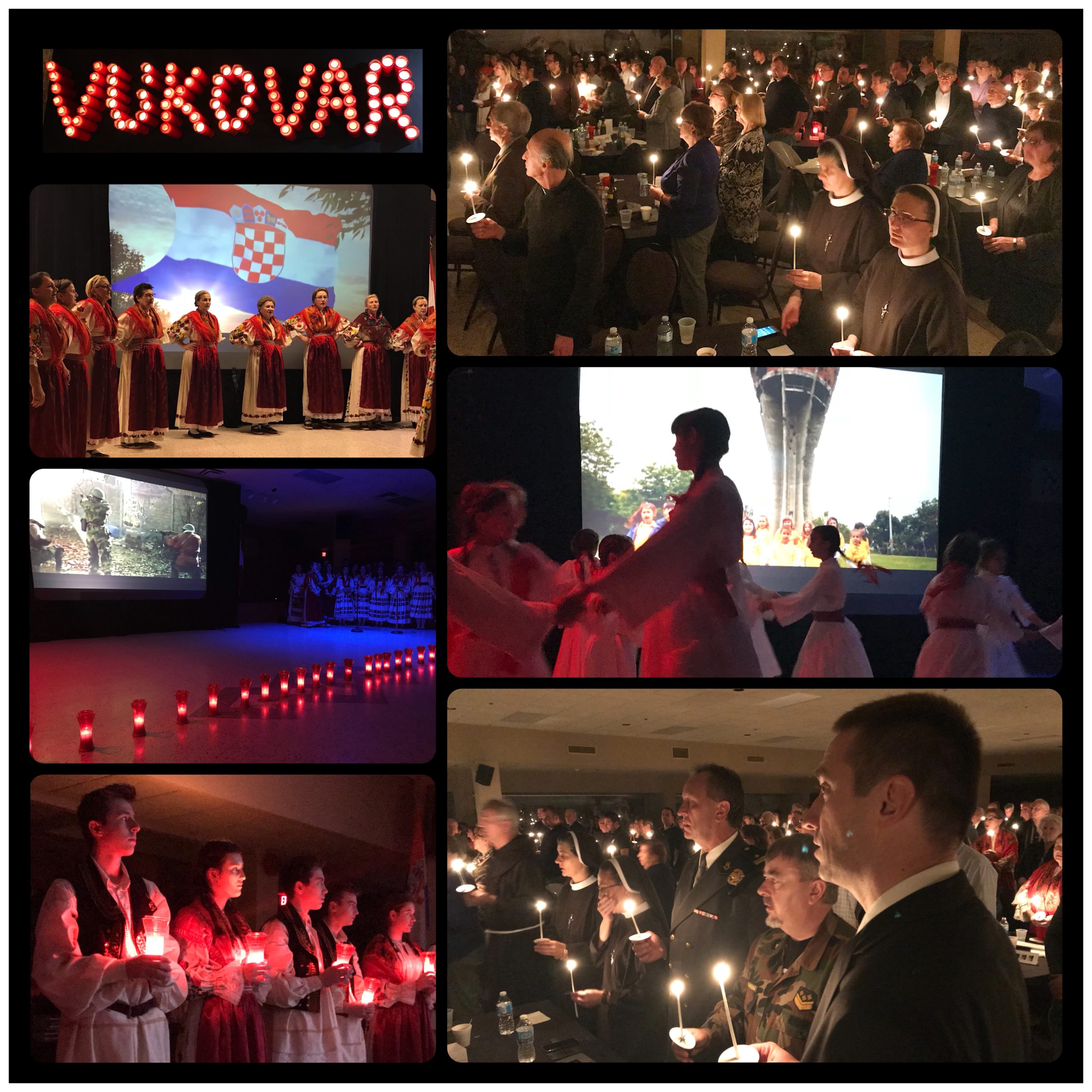 The folklore performances and contributions by HKUD Kralj Zvonimir in Toronto/Mississauga, Kardinal A. Stepinac in Windsor, Vila Velebita, Kardinal Stepinac and Klapa Lasta in Calgary, and Hrvatski Vitezovi and Tamburaški Orkestar Kardinal Stepinac in Vancouver added a unique and special touch to the production.
Attendees at the events were reflective of all segments of our community – representing all ages – and signified the unity that was necessary to free Croatia from the former communist Yugoslavia. A genuine show of respect and dignity towards the veterans and victims of Vukovar and the Homeland War and love for Croatia. Each of the events ended with the voices of all those in attendance singing “Lijepa Li Si”. 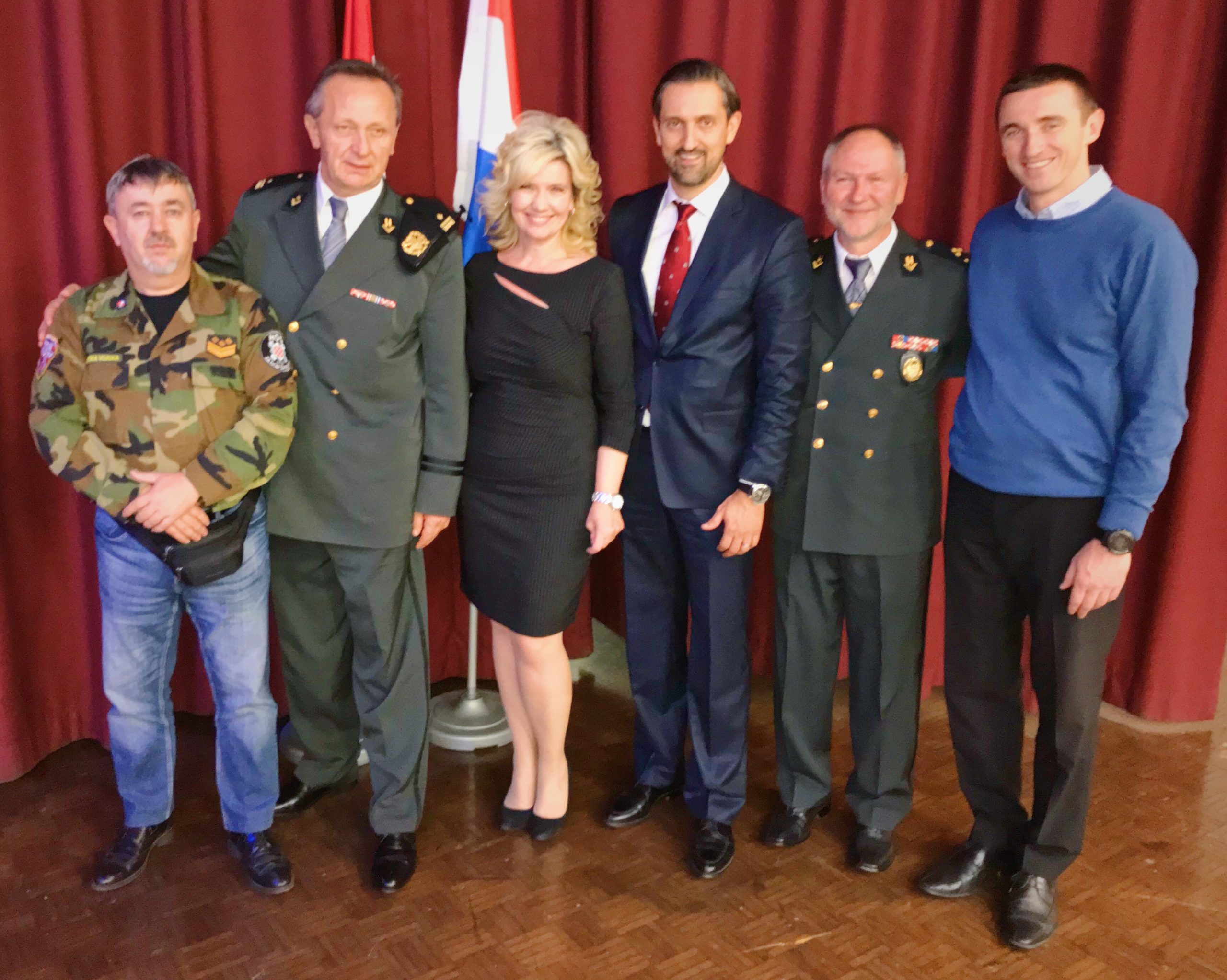 Damir Markuš, Viktorin Jurić-Paša, Wanita Kelava, Ivan Grbešić (Secretary and Member of the Board of Directors of the Chamber) Damir Plavšić and Ivan Penava.

Not to be overshadowed by the presentations of the production, Mayor Penava also engaged with numerous members of the Croatian-Canadian community and explored a number of cultural, educational, promotional, and, in particular, business/investment opportunities in or relating to Vukovar that would be of benefit to the local community.

The visit by the Croatian delegation to Canada comes a year after the Chamber spearheaded, along with the Sounds of Croatia Radio Program (Toronto), a community campaign that raised $205,000 CAD for the restoration of the Vukovar Water Tower. The campaign ended with a 1,000 person gala dinner in Burlington (outside of Toronto) at which the guest of honour was the President of the Republic of Croatia, Kolinda Grabar-Kitarović. 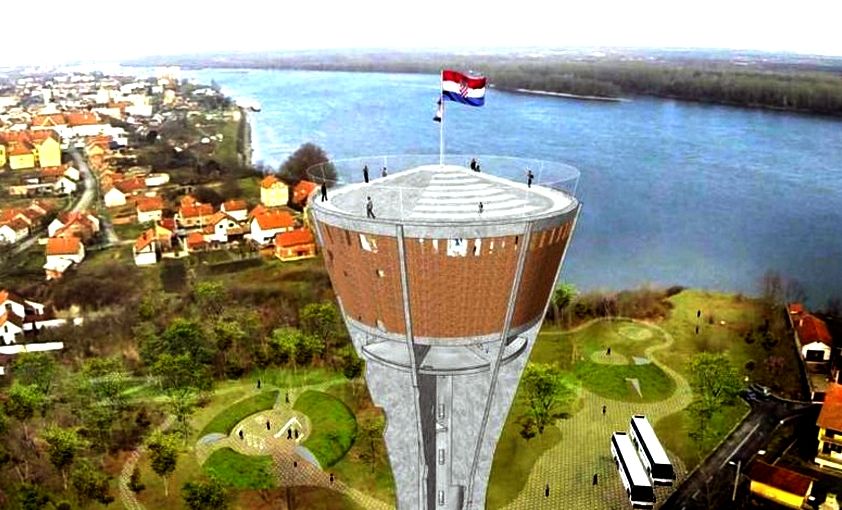 How the Vukovar Water Tower will look (photo: Vukovar City)

Shortly after the campaign, a cheque was presented to Mayor Penava in Vukovar by Ivan Grbešić (Secretary and Member of the Board of Directors of the Chamber), along with the Croatian President, on behalf of members and friends of the Croatian-Canadian community living primarily in Toronto and surrounding areas in Ontario.

The donation represented one of the largest amounts to be contributed to the project by Croats living abroad.
Truly, for each of the respective Croatian communities in Toronto/Mississauga, Windsor, Calgary and Vancouver, the events in Canada over this past week were like no other.