Marendić, who is from the well-known sailing club Mornar from Split on Croatia’s Dalmatian coast, won the title at the end of August in Portugal.

The gold medal came at Petra’s first-ever performance at a European Junior Championship. At her first major international competition, she was convincingly won gold in the under-16 competition and finished sixth in the under-19 competition.

“I was hoping to be first, that was the goal to finish first overall and I achieved it, and I wanted to do that in the older competition but it doesn’t matter next year it will be better. I started the course of the regatta well, the middle it didn’t really work out, and the ending was great,” Petra told HRT. 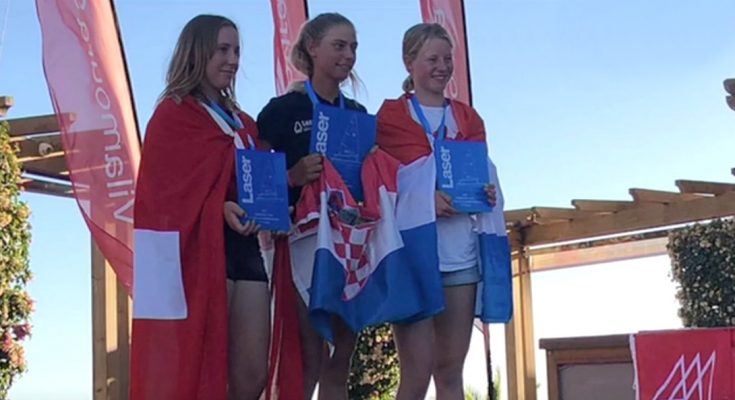 Petra on the podium (Photo: Screenshot/HRT)

The championship was held in Vilamoura, in the very south of Portugal and it was Petra’s first time sailing the Atlantic.

“It’s quite different, the waves are bigger and the feeling in the boat while sailing is completely different, you have to sit back more than usual here and you have to work harder,” she says.

“We worked a lot one on one, I could dedicate a lot to it and we really worked when we add up everything in the last four and a half years, I think it has the most hours at sea in Croatia, I can say that for sure,” said Višić.

Petra is now preparing for next year when the European and World Junior Championships await her. Višić expects her move to the Olympic laser laser class after that.