ZAGREB, 17 March 2021 – Croatian Language Month ended today on the day when the Declaration on the Name and Status of the Croatian Standard Language was published in 1967.

The Month of the Croatian Language took place between the day marking the International Mother Language Day, which was 21st of February, declared by UNESCO in 1999, and 17 March.

The Declaration was a statement adopted by Croatian scholars on 17 March 1967 arguing for the equal treatment of Croatian language standards in Yugoslavia. 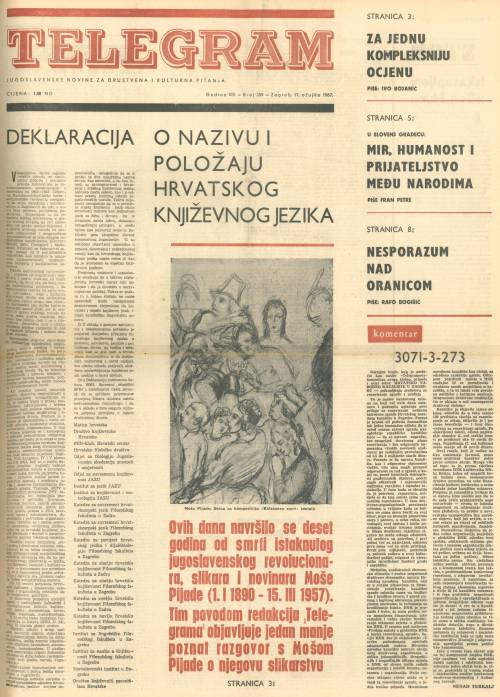 The Declaration was published in the March 17, 1967 issue of Telegram (Photo: Daniel Bunčić/Public Domain)

The Declaration affirmed that the Croatian language demanded separate standards in Yugoslavia with its own “national” language name.

In the state administrative system, in the means of public and mass-communications, as well as in the language of the Yugoslav People’s Army, federal governing bodies, legislature, diplomacy and political organisations, effectively even today a “state language” is being imposed, so that the Croatian language standard is being pushed out and brought into unequal position of a regional dialect. The signers of the declaration demanded the equality of the four Yugoslav language standards and the use of the Croatian literary language in schools and media. State authorities were accused of imposing an official state language, read part of the document which addressed the Sabor of SR Croatia and the Assembly of SFR Yugoslavia.

The demands were initially rejected but granted in the new Yugoslav constitution of 1974. Nearly all requests were granted in the formulation, and it remained in effect until the breakup of Yugoslavia.