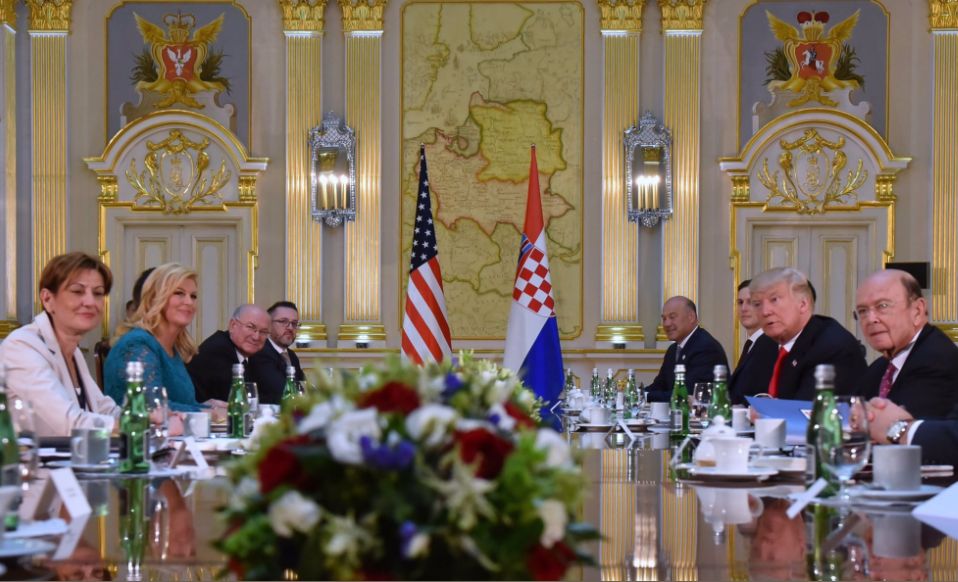 A Croatian delegation, led by President Kolinda Grabar-Kitarović, have had a meeting with the President of the United States Donald Trump and his delegation in Warsaw, Poland on Thursday.

Trump was a special guest of the high-level meeting of The Three Seas Initiative, which Croatia had chaired, today.

The Three Seas Initiative is an alliance of 12 European Union Member States situated between the Adriatic, Baltic and Black Seas: Austria, Bulgaria, Croatia, Czech Republic, Estonia, Hungary, Latvia, Lithuania, Poland, Romania, Slovakia, and Slovenia which aims to create a North-South infrastructure in the telecommunications, energy, and transportation sectors and reduce their dependence on oil and gas supplied by Russia.

After the opening of the summit on Thursday, the Croatian and U.S presidents met to discuss a number issues surrounding the initiative.

On strategic bilateral relations, Krk LNG as contribution to energy security, importance of US engagement in SE Europe with @realDonaldTrump pic.twitter.com/LwBrrMbT4z

Kolinda Grabar-Kitarović has been a driving force behind the initiative to diversify the region’s energy supply and make it less dependent on Russian energy sources.

“Convinced that by expanding the existing cooperation in energy, transportation, digital communication and economic sectors, Central and Eastern Europe will become more secure, safe and competitive, thus contributing to making the European Union more resilient as a whole. Agreeing that the momentum behind a comprehensive Adriatic–Baltic–Black Sea area cooperation, both within the European Union and across the broader transatlantic space, has to be reinvigorated, without creating a parallel structure to the existing mechanisms of cooperation,” an earlier statement regarding the initiative stated.

The Croatian government has planned to build an LNG terminal on Krk island, which could connect to Poland’s terminal and establish a key LNG corridor running through the Three Seas region.

Trump said that the region held some significance for him as his wife Melania is from Slovenia, who was a member of the alliance.