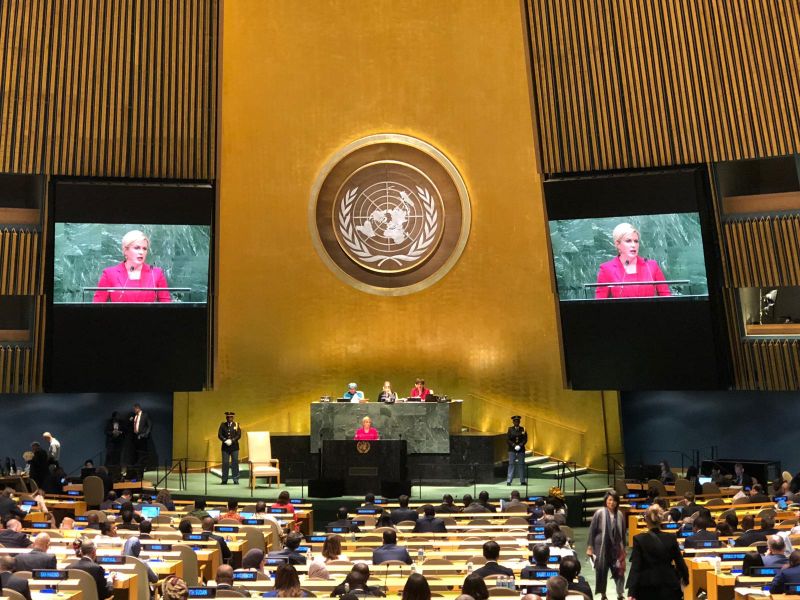 The President of the Republic of Croatia Kolinda Grabar-Kitarović delivered an address at the high-level General Debate of the 74th Session of the United Nations General Assembly in New York City.

We are gathered here on the eve of the 75th anniversary of the United Nations. Gatherings and anniversaries are usually a time of reflection and introspection. One such global occasion is the United Nations General Assembly. Here the world meets, reflects, exchanges ideas and sets its goals for the future. It is a forum unique in our human history.

I believe that we must use the coming months and the upcoming 75th birthday of our Organization in 2020 not only to emphasize its accomplishments and global relevance in peace and security, development, climate action, human rights or humanitarian assistance, but also to take a bold leap forward and reiterate our commitments. However, time is of the essence.

The Secretary-General Antonio Guterres said last January: “The best-selling brand in our world today is indeed fear… It gets ratings. It wins votes. It generates clicks”. Indeed, fear is present and it inhibits us from taking that step in the right direction, it is hampering our potential and our creativity.

We, gathered here, should lead by example. It is upon us to fearlessly use the instruments we have at our disposal to advance our own nations and our own planet and to boldly think of new ones – right now. It is upon us to address the greatest challenges of the globalized 21st century: climate change, sustainable development, migration, terrorism, weapons of mass destruction and new technologies. So, how do we prevent unfavourable scenarios and harvest the benefits? How do we mobilize States and joint resources to respond adequately to emerging threats?

We all know the answer, which is at the same time fairly simple and evermore difficult: by joining forces. We cannot deny that multilateralism is facing challenges. Reasons might be numerous and complex. However, it still remains our best chance of achieving our common goals. By standing alone and isolated, one fails. But many of us, united around common ideas and working in good faith, have the tools in our hands to succeed. Let us use the existing mechanisms, transform them for the better and make them more effective.

No doubt, reforms are necessary. We also need to take a deep look at our Organization, its strengths and weaknesses and trace the path for decades to come. In that vein, I emphasize Croatia’s full support to the UN reform agenda and the Secretary-General’s continued efforts in this regard. We have to revitalize the UN and double our own efforts to make this building a home to true global leadership and platform for the promotion and development of the rules based international order.

The goals before us – poverty eradication, quality education, inclusion and climate action cannot be achieved without individual, national efforts coupled with our common dedication and action. For its part, Croatia is doing its best to fulfill the goals we have set for ourselves: First we are combating poverty and social exclusion and reducing social inequalities; Secondly, for us, quality education is key to long-term social stability and economic progress; Thirdly, as regards inclusion – the ultimate values of our constitutional order are freedom, parity, gender equality and respect for human rights; and finally, Croatia is dedicated to fighting climate change by implementing innovative solutions that will transform our economy and society. Croatia remains committed to the efficient fulfilment of its obligations under the Paris Agreement.

Just as EU accession provided us with a blueprint for the transformation of governance, economy and society, so does Croatia see the Sustainable Development Goals as a matrix for our future and an obligation to our citizens and the international community. We need to reinvigorate the political momentum and our starting enthusiasm for the Agenda 2030. For us, the 17 sustainable development goals are guidelines for our own development and a framework for securing a better and more sustainable future both locally and globally.

I have given more than one speech in this very podium. Together with you, I have raised many issues that trouble our nations and the world. Today, I want to focus on the environment, in particular on our oceans and seas. They are the essence and foundation of all life on Earth. Without them, we would not be here.

Croatia is both a Central European and a Mediterranean country with great biodiversity. The number of known species in Croatia is around forty thousand (40.000), including significant populations of many species that are threatened in Europe and the world today. Besides our talented people, biodiversity is our greatest treasure.

In that vein, Croatia pays particular attention to the environmental protection of the Adriatic Sea. We are focused on the preservation and facilitation of the marine and coastal environmental recovery, the protection of biodiversity and the sustainable use of the sea and the coastal areas. Croatia’s national ecological network covers 37 % of our entire land area and 15 % of our marine area.

However, climate change and pollution threaten our natural resources, our delicate ecosystems and our Adriatic Sea. We cannot neglect further the severe implications on our nature and the significant economic losses we are facing in the future. Marine litter is a problem of increasing concern. It threatens marine life in the world’s oceans and in the Adriatic Sea, having already impacted more than 700 marine species. Croatian coastal areas, one of the world’s cleanest and most wondrous, are at times severely affected by poorly managed waste from our southern, neighbouring countries.

The plastic pollution in our seas and oceans is one of the greatest threats that humanity is facing. Without the preservation of our waters and our marine life, there will be nothing to leave to future generations. Each year around 8 million tons of plastic debris ends up in our oceans and our seas. Plastics are found throughout the marine environment, from the surface of the water down to the seafloor.

We know that pollution has an annual financial negative impact measured in billions of USD. These are only immediate costs of the plastic’s impact on marine life, tourism, fisheries and businesses. However, plastic pollution carries toxic pollutants into our own food chain. A recent study has revealed that in general, and on average people could be ingesting approximately 5 grams of plastic every week, which is the equivalent weight of a credit card. What we throw into the sea today, we reap in our food tomorrow.

The renowned Institute of Oceanography and Fisheries in Split has been monitoring the Adriatic Sea since 1930 and its scientific activity encompasses very complex research in the fields of biological, chemical and physical oceanography, sedimentology, fisheries biology and aquaculture. Over a hundred scientists and experts are diligently working on the preservation of the sea as one of our greatest assets. One of their many projects involves the cooperation with fishermen: plastics and litter from the seafloor found in their fishing nets is collected and disposed of. A number of fishing ships are involved in the project and have so far collected over 50 tons of waste.

In the Croatian part of the Adriatic Sea, 97 per cent of the waters on the beaches are of exceptional quality. This we do not take for granted, nor can we allow ourselves to do so. That is why more and more local communities organize beach cleaning actions. The local communities and volunteers encourage tourists to take part in those activities as well. From this spot I encourage all – please stop throwing waste into our oceans and seas. Our own future is at stake.

Last year I spoke about the Ocean Cleanup, the first feasible method to rid the world’s oceans of plastic and remove 50% of the Great Pacific Garbage Patch in just 5 years. The media has named it Pac Man, referring to a popular old videogame. I spoke about the inventor of this method, the brilliant young Croatian scientist living in the Netherlands, Bojan Šlat.

But what we need is deeds, more deeds like that, not words. The clock is ticking. So today, instead of a lengthy speech, I want to use the remaining time to give real people a voice and emphasize again real action which inspires further action. That is why I will tell you about Zlarin, one of the 1246 Croatian islands. It is a small island, inhabited by about 300 people. People with hearts and minds dedicated to the preservation of their environment and their home.

Last year, young environmental enthusiasts gathered the entire local community to start an action called “Take a break from plastic”. The goal was to make Zlarin the first Adriatic island free of single-use plastic and plastic waste within a year. Their action was local, but their efforts are indeed global. Since I could not project any videos in this room, I kindly ask you to watch their short video and message on the web links provided in the written version of my speech. The video is, by the way, subtitled in English.

The people of Zlarin and supporters you will see in the video had the vision and courage to transform their island community. Within just one year, the island has transformed. By signing a symbolic declaration, all residents, caterers and merchants have disposed of disposable plastics from everyday use. Today, children on Zlarin educate hundreds of visiting tourists that plastic is not welcome on their island. These are the children from Zlarin and they really deserve recognition.

In this Chamber here, we are running out of excuses for not following the example of the people of Zlarin and not doing the same globally. Let us make all of our communities just as responsible as the people of Zlarin. Let us not hesitate and be discouraged by past or present failures but rather provide strong leadership for our common success in the future.

Fear is a time thief.

And time is scarce.

In the words of Saint John Paul II.: “Be not afraid!”