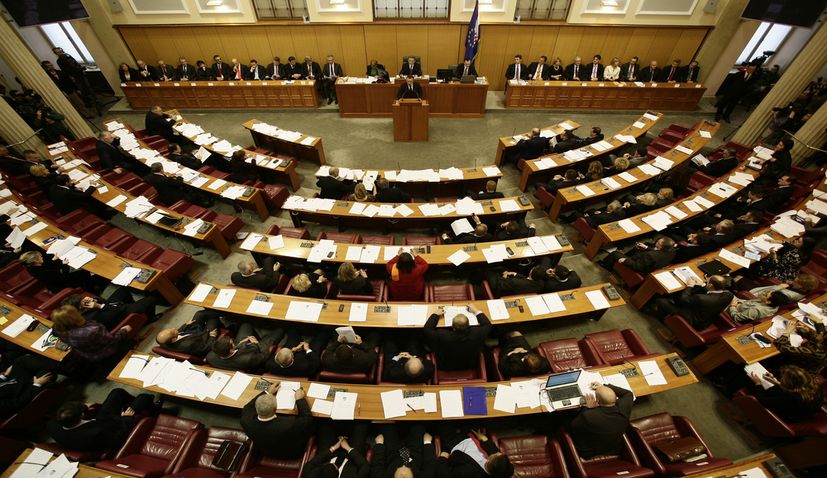 ZAGREB, Nov 11 (Hina) – Parliament on Wednesday revised the 2020 state budget for the second time with projections for 2021 and 2022, rejecting all 13 amendments submitted by the opposition.

Seventy-six MPs voted for the revision, while 50 voted against.

This year has been marked by the coronavirus pandemic and the crisis it has caused as well as the Zagreb earthquake in March, all of which has affected budget revenues and expenditures. Revenues have now been increased by HRK 9.2 billion to 131.1 billion and expenditures by HRK 8.6 billion to 155.9 billion. The general government is projected to record an HRK 29.5 billion deficit, or 8% of GDP.

The public debt-to-GDP ratio is projected to go up by 14.5 percentage points to 87.3%, but it is expected to decrease next year already at an average rate of 2.2 pp, Prime Minister Andrej Plenkovic said presenting the revision in parliament last week.

He also highlighted expenditures of HRK 1.2 billion for job retention and anti-coronavirus measures in culture, tourism and sports as well as for healthcare equipment.

The parliamentary majority, following the government, rejected all amendments to the revised budget submitted by MPs of Bridge and the Social Democratic Party.

Among other things, the two opposition parties asked for HRK 100 million for wage supplements for workers caring for COVID-19 patients and HRK 20 million to help pensioners buy new TV sets due to the switch to a new signal.

Nikola Grmoja of Bridge said he was disappointed by the rejection of his party’s amendments.

We asked that doctors and nurses working with COVID patients receive a wage supplement. Croatia is the only country that hasn’t provided that. You turned it down. You also turned down a COVID bonus for pensioners, he said, accusing the ruling coalition of corruption.

Hrvoje Zekanovic of the Croatian Sovereignists said the key item in the revision was a higher EU membership fee.

Croatia will pay a €155 million higher fee. Neither the minister nor the premier had the courage to say anything about that, he said, adding that the money Croatia would receive from the EU was not a gift.

Croatia will have to pay it back. How? We don’t know, said Zekanovic.