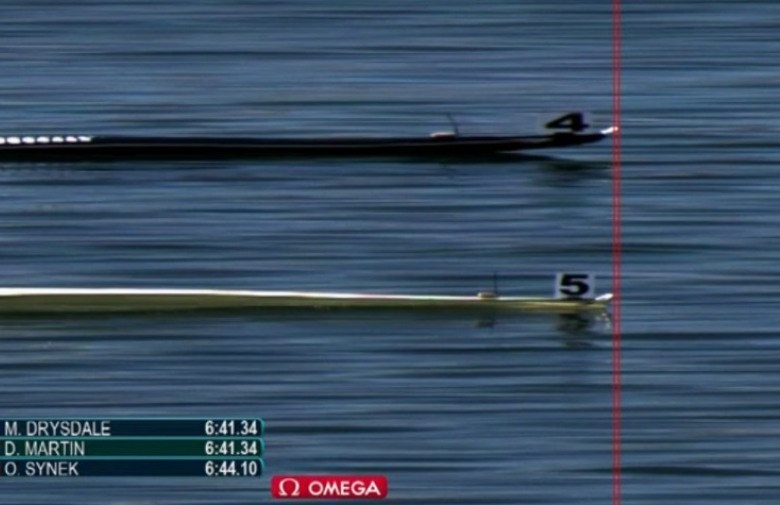 After both Mahe Drysdale from New Zealand and Damir Martin from Croatia crossed the line clocked at 6 minutes 41.34 seconds, a photo-finish ruled that the Kiwi won the men’s single sculls by seven one thousandths of a second…

The Croatian and Kiwi raced what will go down as the closet rowing race in history on Saturday in Rio, with defending Olympic champion Drysdale awarded the gold after TV stations initially awarded Martin 1st place.

It appeared that Martin had pipped Drysdale at the end of a fantastic race, but they both stopped the clock at the exact same time of 6:41.34. The decision to award Drysdale with gold after the photo was reviewed was taken well by Martin, who congratulated his opponent and expressed delight in his own efforts.

“I gave 1000 percent of myself. I am more satisfied with a good race than a silver medal. The next one is going to be another colour,” Martin said, before adding.

“It’s one of the perfect ones, where I did 100 per cent, even more. The last 100 metres was incredible, the shouts from the spectators were crazy.”

“Damir for me was the winner because I have that in-built feeling where I can judge things, but the electronic clock says different,” Martin’s coach Nikola Bralić, who was convinced his athlete had won gold, said after the race.

Martin and Drysdale battling it out in what was an amazing race (photo credit: Reuters)

Damir’s trainer Srećko Šuk was also not happy with the final result but declined to appeal straight after the race.

“I am very angry because it first appeared on the big screen that Martin was the winner, and then followed by deliberations about equal times and then eventually very suspicious footage with the number on the boat of the New Zealander stretched. In this situation it would be most fair to share the gold medal,” Šuk said as reported to daily Vecernji list, adding that there was not much point appealing as Croatia was a small nation with not much chance to influence a change in the decision.

“With photo finishes there are always a number of photos from different fractions of time, but they are only constantly showing us only one,” Mateša said.

It is not uncommon for gold medals to be shared when times are clocked the same. In swimming events at the Olympics medals have been shared.