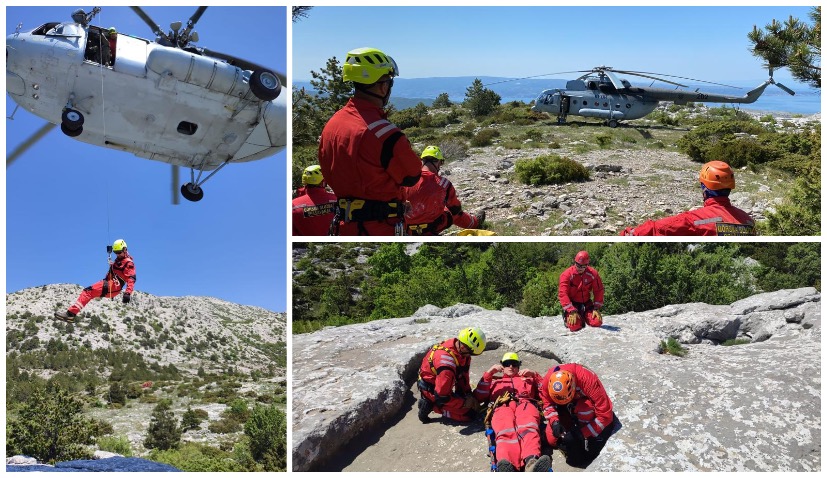 The Croatian Mountain Rescue Service (HGSS) and the Croatian Air Force (HRZ) organised two helicopter exercises in Mosor: “This is the earliest start of duty in the history of helicopter rescue”

“The helicopter duty of the Croatian Mountain Rescue Service started on May 1 this year, the earliest since the service started performing helicopter actions. We do dozens of rescues and helicopter searches every year. Accordingly, these extremely important exercises were held in preparation for the upcoming summer season,” said Josip Granić, head of the HGSS.

These are regular annual exercises that renew the knowledge of rescue pilots, before which is the summer season in which the HGSS is constantly on duty at the Divulje air base.

“The helicopter duty of the Croatian Mountain Rescue Service has so far started on June 1, and this year we started the duty for the first time a month earlier. We realised that due to the continuous increase in the number of hikers, recreationists and tourists in non-urban areas, it is necessary to start the helicopter duty earlier, which will last until October 30.

These are additional teams on duty in Divulje. We want these additional teams to be able to react out of season, at any time of the year, so we will probably soon start with a year-round duty of this type. The members of the HGSS organised the exercises in cooperation with the 395th Squadron of Transport Helicopters of the Croatian Air Force, 93rd Wing, whose helicopter was used as part of the exercises. I must certainly point out the capabilities of helicopter crews, which are once again proving to be an extremely good partner in carrying out the tasks of the HGSS,” added Granić.

All safety measures and dangers when working with a helicopter as a resource used for rescuing people and property were repeated during the exercises.