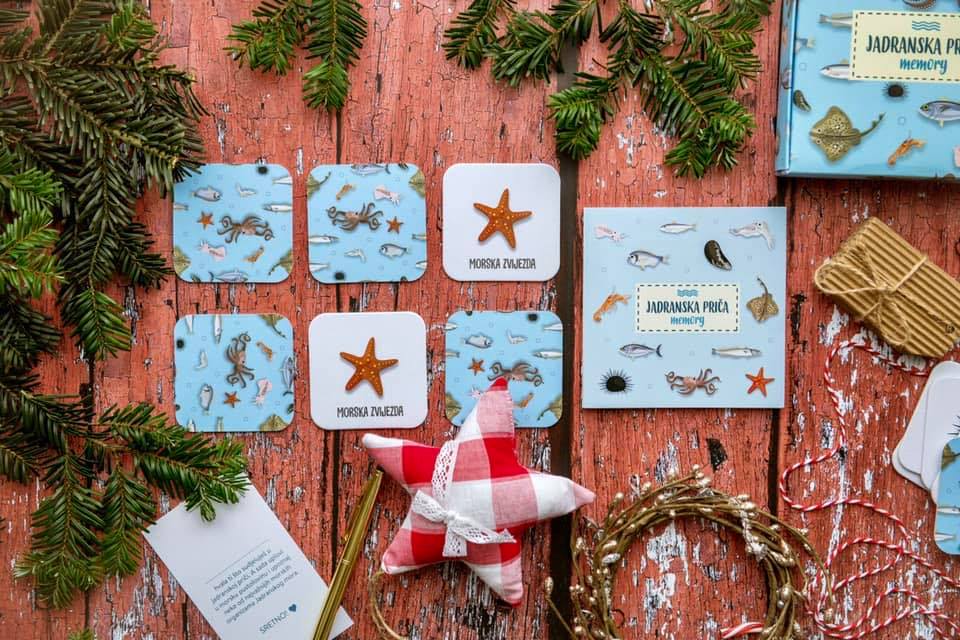 In order to know from an early age that the octopus is very intelligent, that squid have 4 hearts, that the sardine is a small sea queen that belongs to the group of blue fish and much more, the memory game from Croatian brand Riblja priča (Fish story) is here.

Behind the brand Riblja priča are Marina and Filip, two agronomists who are also spouses. The idea for the Riblja priča memory game and blog came quite by accident.

Through her scientific-teaching work, Marina realised that Croats eat too little fish, and Filip, is a man from the sea, who spent his whole life by the sea and with fish. Filip spent part of his life in Norway, working at the Institute for Marine Research, where he fell even more in love with fishing and consuming fish.

4 years ago they started a blog together with the aim of promoting eating fish. They regularly prepared fish and other seafood dishes, as well as educating their followers on why it is important to eat seafood. A year ago they became parents and then they realised that they did not want their child, and all other children, to think that salmon is an Adriatic fish, that scampi is the same as shrimp or that they do not know how to recognise a squid or stingray. 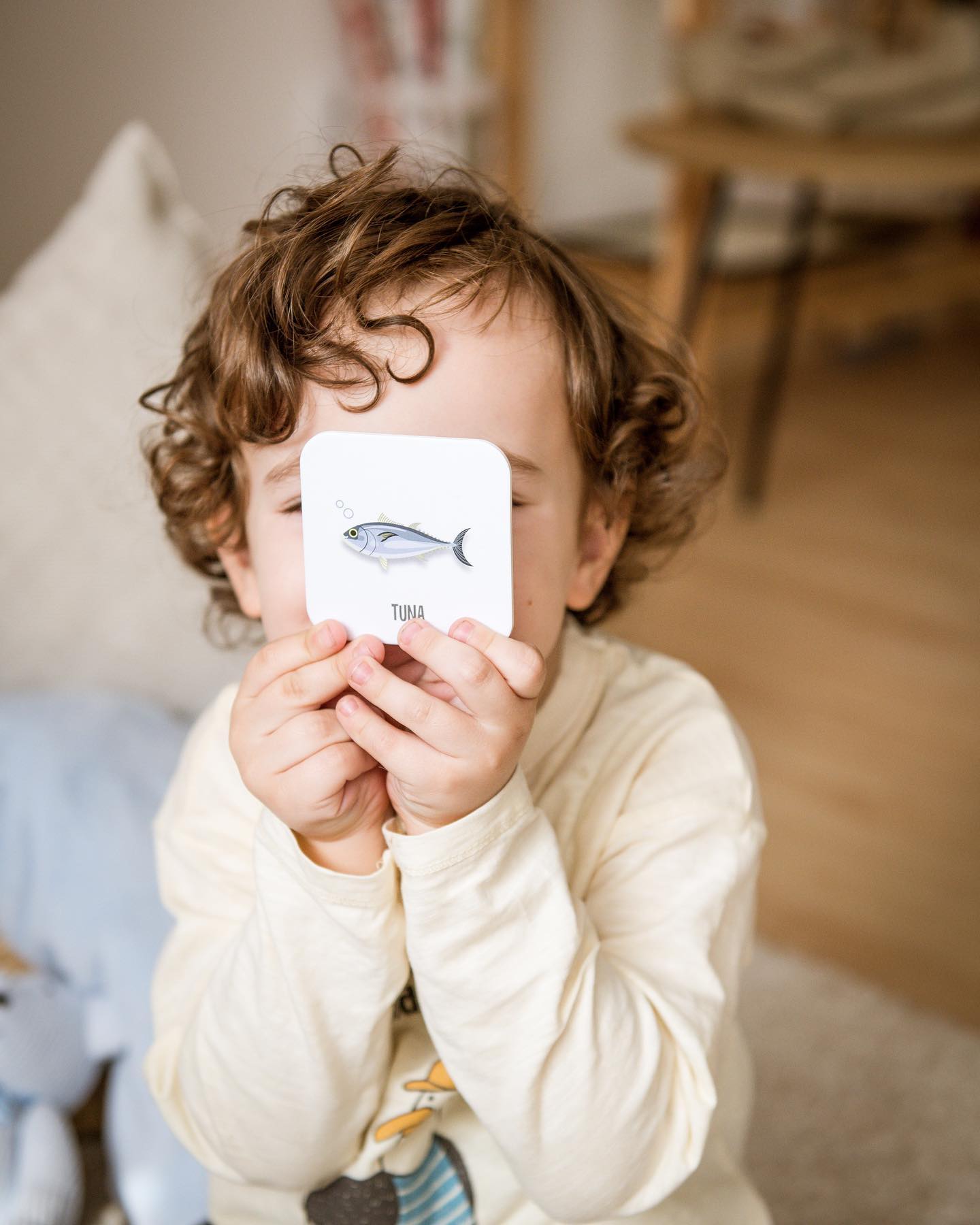 This is how the idea for the educational memory game Jadranska priča (Adriatic story) was born.

The memory game consists of 24 cards, or 12 pairs with the most important organisms of the Adriatic Sea. 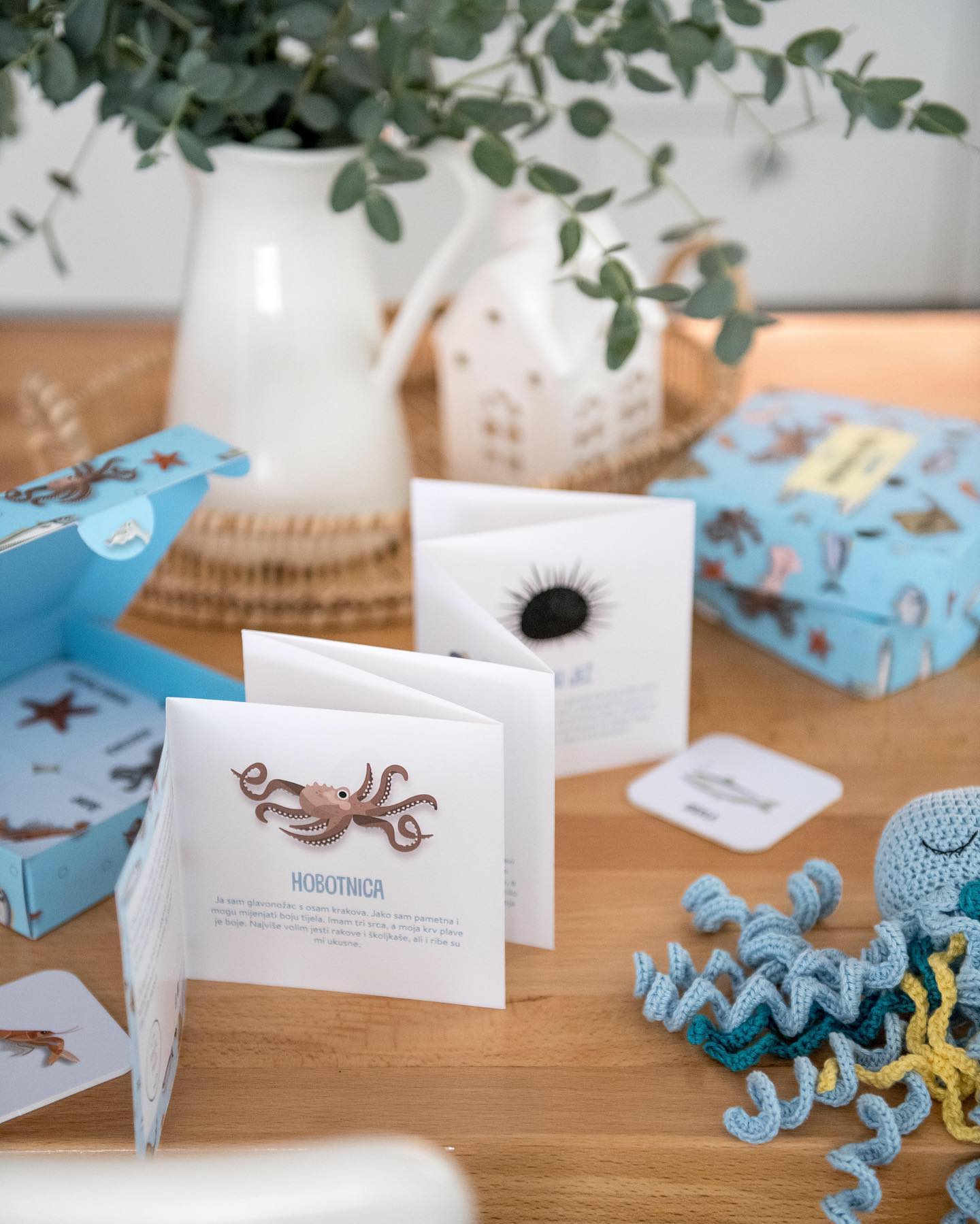 You will find stingray, sea urchin, sea bream, squid, etc. In order to make the illustrations realistic as possible, and at the same time tempting to children, talented Croatian illustrators Tena Letica and Ivan Dilberović took care of it. 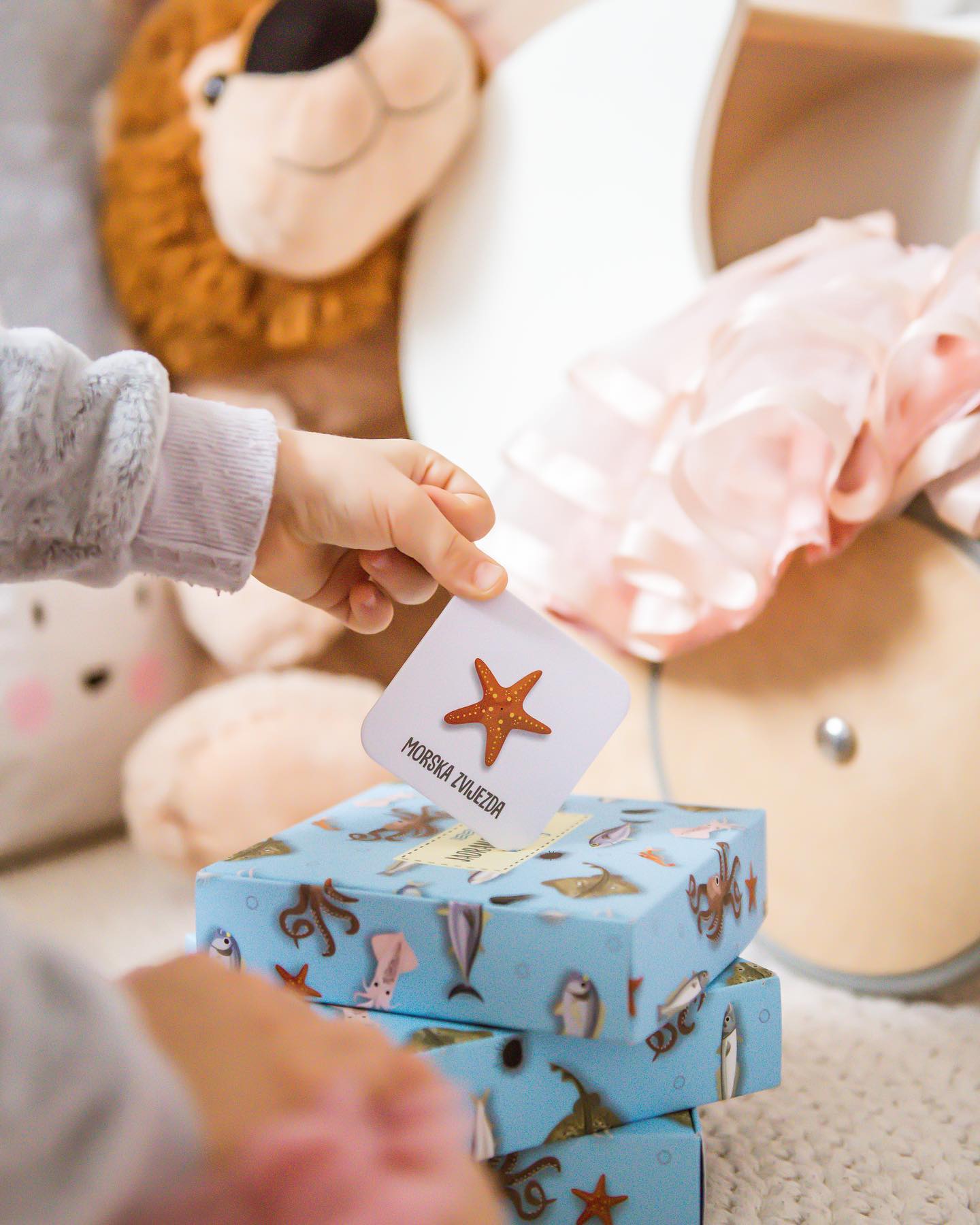 In order not to be just an ordinary memory game, the box also contains a brochure with a description of each marine organism, so you will find out that tuna can reach speeds of up to 70km / h, that an octopus has 3 hearts or that a starfish can have up to 40 arms.

A special charm to the memory is given by the personalised card, on which the name of the child, the owner of the Jadranska priča memory, is written. 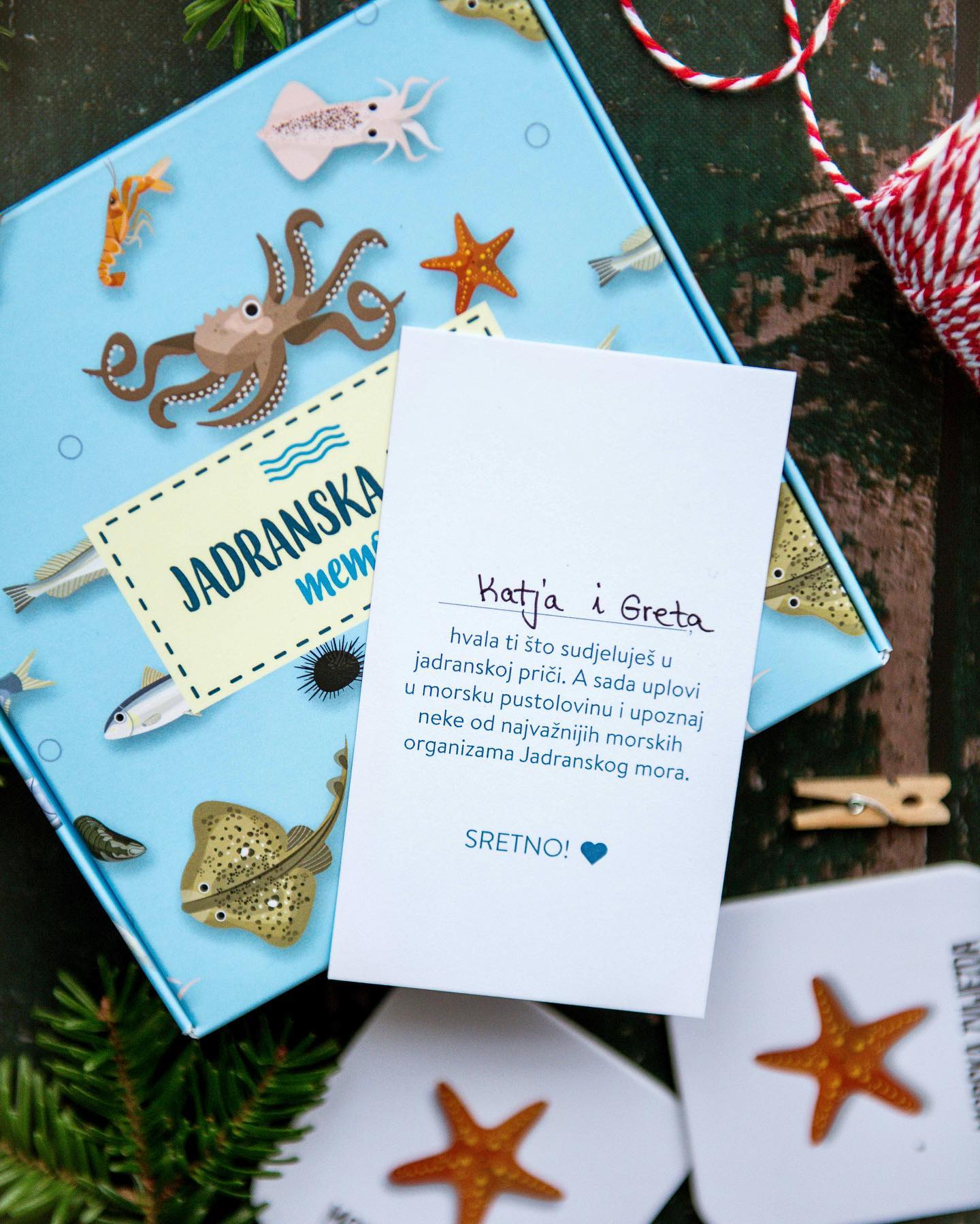 “The added value to Jadranska priča is that as a child grows, memory takes on a new dimension. At the beginning (1-3 years) it can be used only for pictorial memory with the illustrations very popular with children. Later, children begin to connect pairs, mostly around the age of 3,, which is great for developing memory and concentration, but they also learn the names of Adriatic organisms and what they look like. When children encounter a starfish or sea urchin in the sea, they will recognise them themselves. At the age of 6-7, they can learn from the brochure that, for example, cuttlefish have blue blood. In addition, when consuming fish, recommended at least twice a week, you can explain to children when they eat, for example, sardines, that they belong to the group of blue fish, show them in the brochure what sardines look like and teach them that she is a little sea queen which has fed our people for generations,” the creators told us. 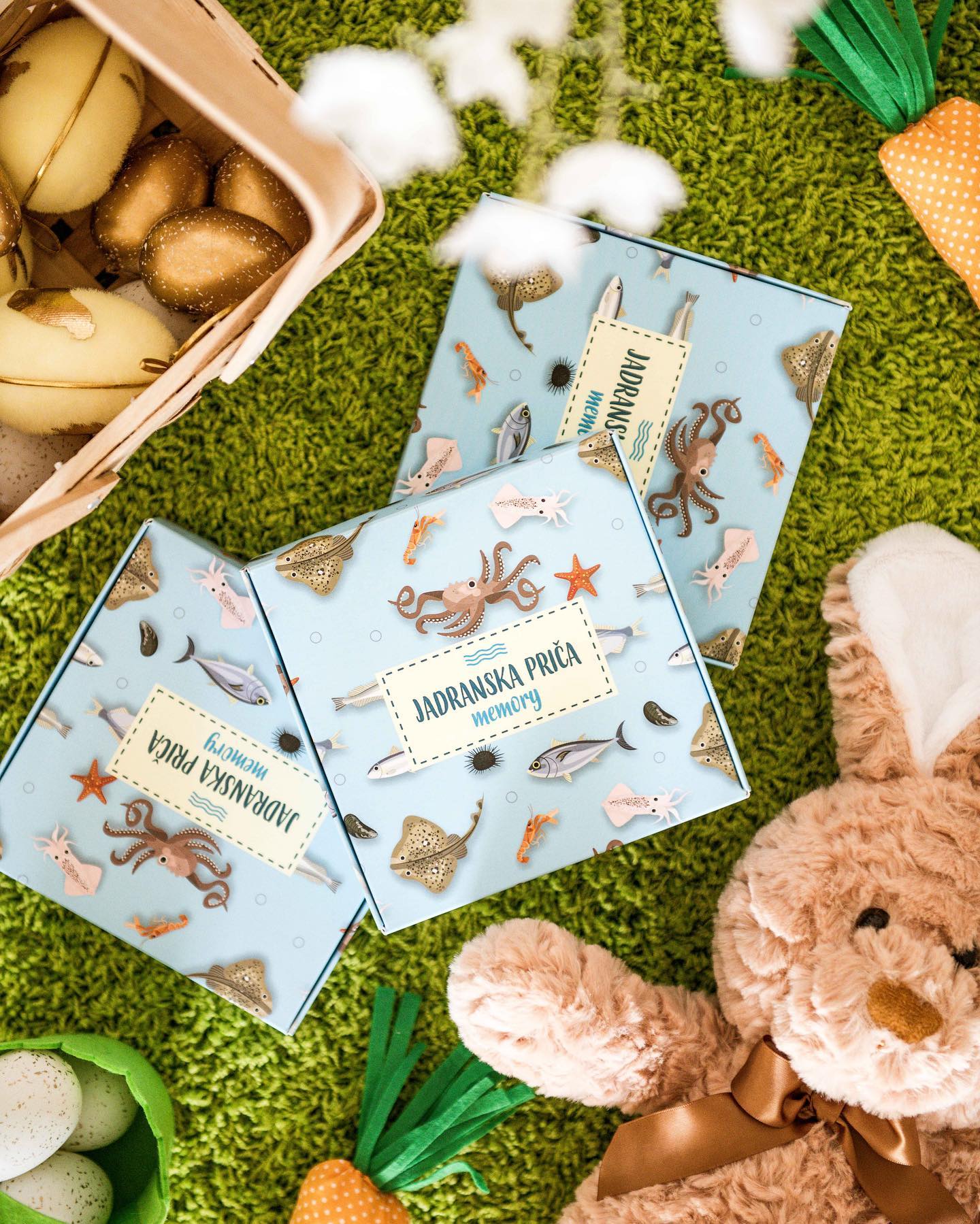 All stages of production, from illustration, prepress, printing, and packaging is done in Croatia, making it a 100% domestic product.

Riblja priča is available to order worldwide and you can send them a DM or email: [email protected] to enquire about shipping costs abroad.