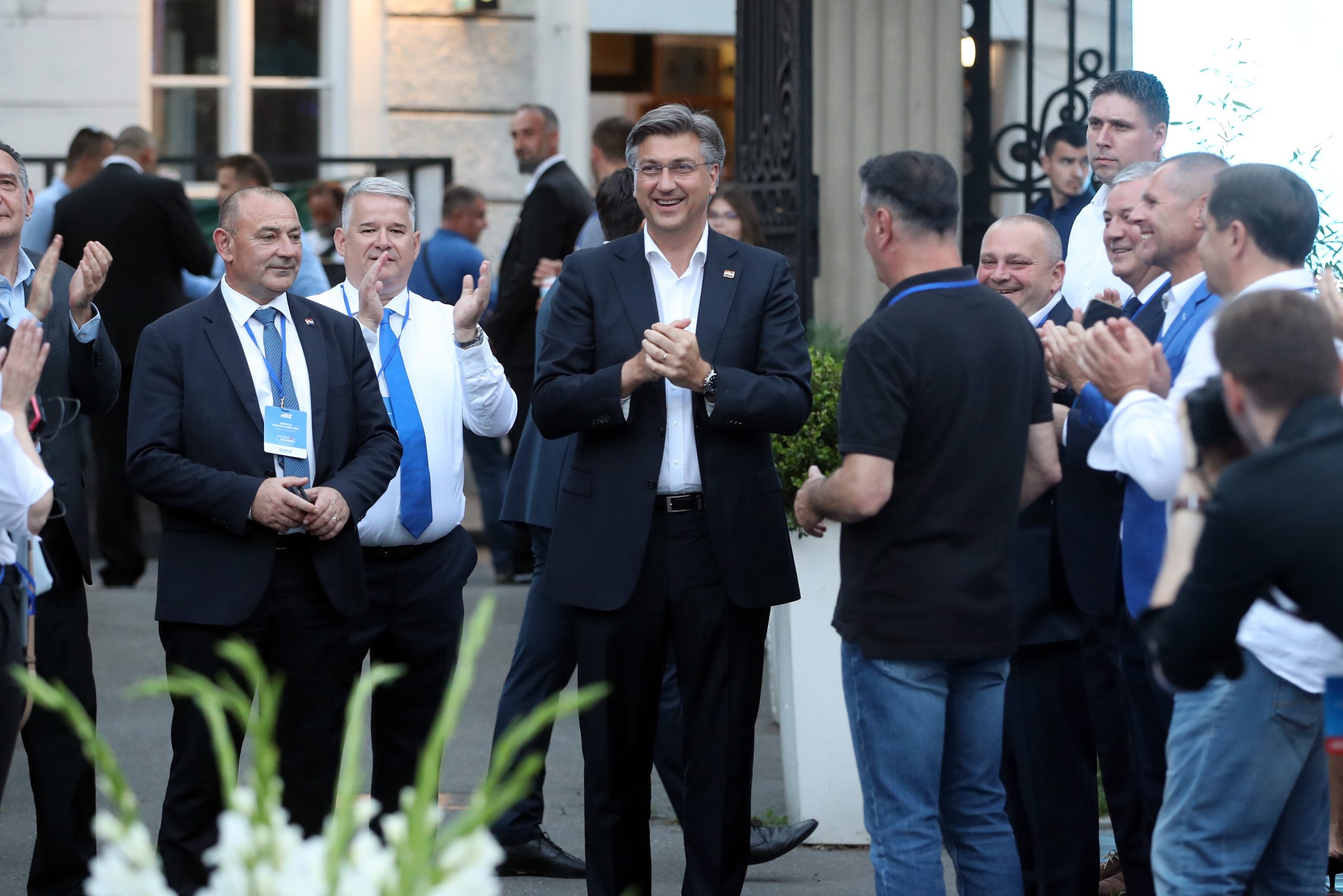 12:10 p.m. (Hina) – HDZ president Andrej Plenkovic said on Sunday, after winning the parliamentary election, that this was a big victory and big voter support as well as a huge obligation which they would take into account every day of the new term in dealing with the challenges facing Croatia.

Croatia needs a government which will pursue a new modern sovereignism policy, which cultivates the values of the HDZ, of our first president Franjo Tudjman, because in recent years we have put the HDZ in the part of the political spectrum where he always put it and always wanted it, he added.

“This transformation was supported both in intra-party elections and today’s parliamentary election. That’s why we know we are on the right track both for Croatia’s values and progress.”

Plenkovic thanked everyone for the result and the HDZ’s victory today, including voters.

“Whether they gave (the vote) to us, who have won the majority confidence, whether they gave it to some other parties they felt have the best solutions for Croatia. That’s what democracy is, an expression of the people’s will on which course Croatia should take.”

He said this victory was an obligation “because we had a difficult term, full of temptations, and the challenges ahead are likely to be more difficult.”

Such circumstances demand work, energy, enthusiasm, drive and dedication, he added. “They also demand responsibility, knowledge and experience. We tried to synthesise all that in our platform and in our candidates.”

11:30 p.m. (Hina) – Social Democratic Party president Davor Bernardic said on Sunday, after a poor parliamentary election result of the SDP-led Restart Coalition, that he was not running from responsibility and that he was willing to step down, which the SDP leadership would discuss on Monday.

“Of course this result is bad for the SDP and the Restart Coalition. I’m not running away from responsibility and I’m willing to step down. We’ll discuss it tomorrow at the party Presidency,” he told reporters in the SDP headquarters.

Restart has won 43 seats in parliament in Sunday’s election, according to incomplete results, which is the SDP’s poorest result in the past three parliamentary elections. 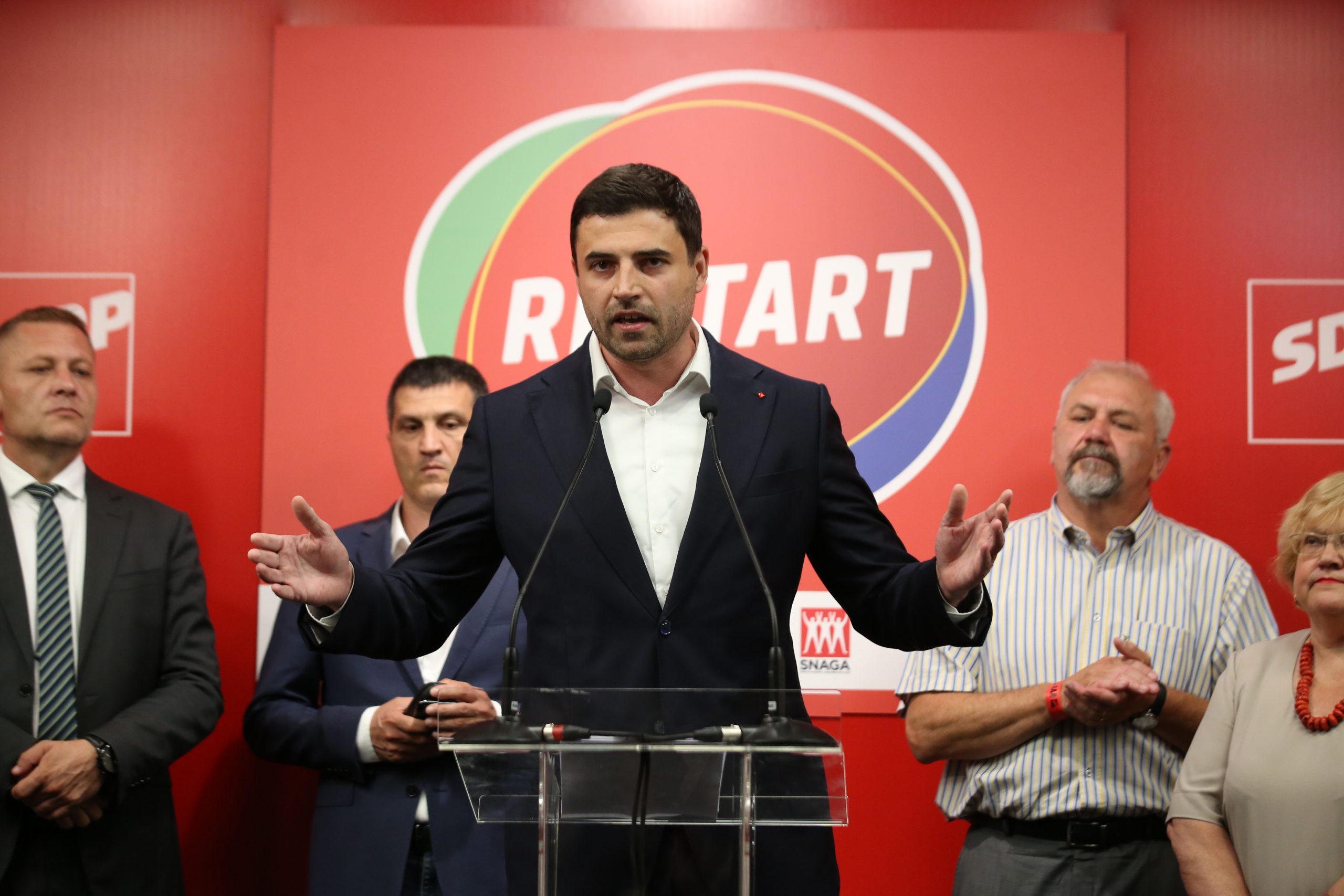 Bernardic congratulated the Croatian Democratic Union (HDZ) and its leader Andrej Plenkovic on the victory of the 10th parliamentary elections.

Homeland Movement president Miroslav Skoro said on Sunday that only 50 days after its establishment the party had achieved a great result, coming third in today’s parliamentary election after winning 15 seats, according to incomplete results.

“We can be happy that in only 50 days of the Homeland Movement’s existence, we have managed to come third in Croatia,” he said.

Skoro thanked the voters who went to the polls, saying the campaign was very brief as well as dirty. In politics it’s necessary to be realistic, he said, adding that he realised that some had expected more. 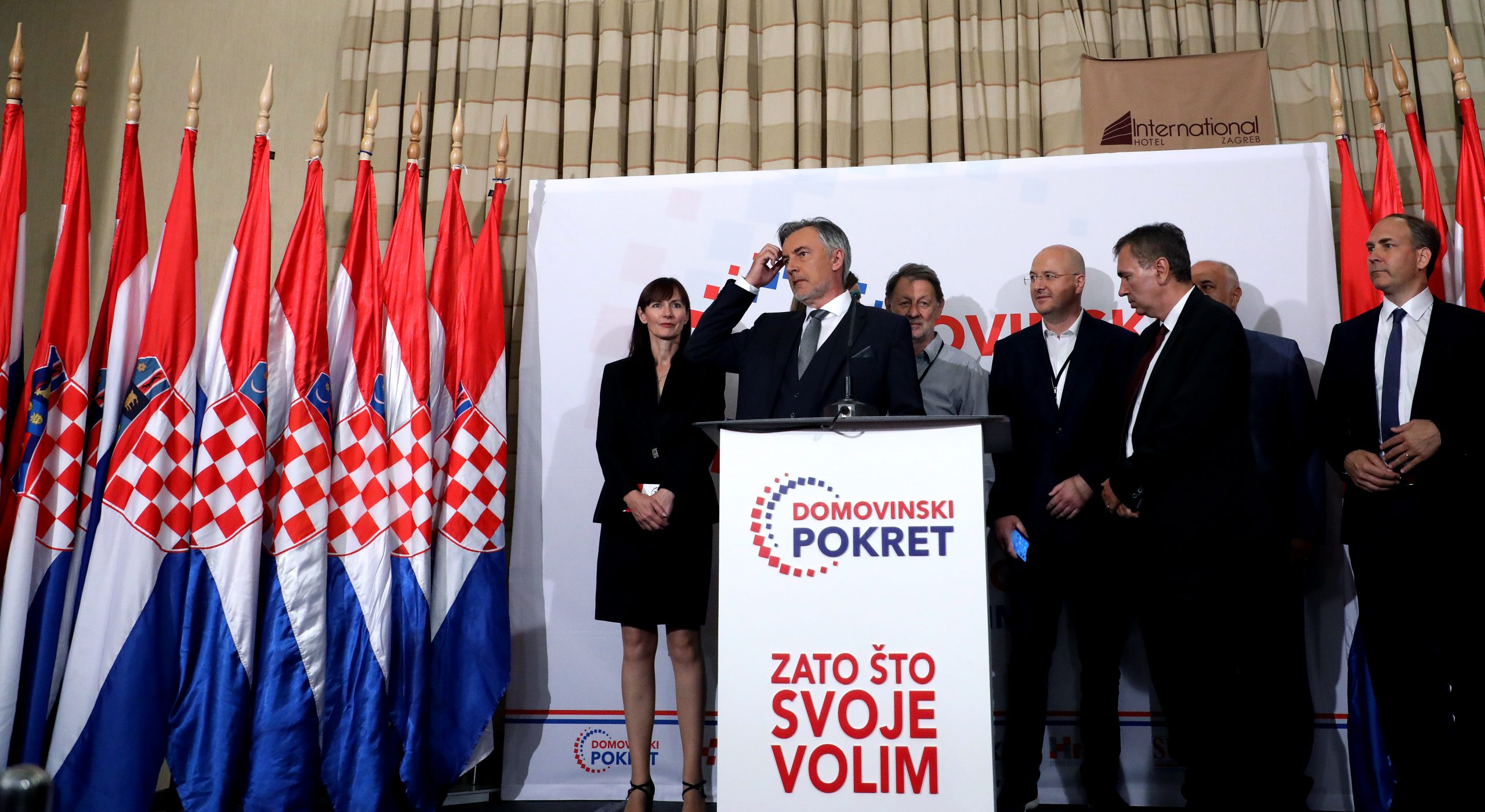 “These 15 seats are a good indicator that we are on the right track, that voters have recognised that and that we are at a watershed. The Croatian parliament will never be the same again. Many more different opinions will be heard,” Skoro said.

We have shown that we can do it and that a small spark can restore hope in the future, said Tomislav Tomasevic of the political group We Can! after their green-left coalition achieved surprising success in Sunday’s elections winning six seats in parliament.

“They told us that we can’t enter parliament and that we can’t shake up the position of (Zagreb Mayor) Milan Bandic. We have shown them that we can,” Tomasevic said to euphoric chanting from his supporters and sympathisers at the coalition’s election headquarters in Zagreb.

He said that their six-party coalition had demonstrated creativity and perseverance despite the lack of infrastructure.

Speaking of their future steps, Tomasevic said that their focus would be on removing from power “all local sheriffs” as well as on fighting for social justice, environmental sustainability, democracy and gender equality.

11.00 p.m. (Hina) – The Croatian Democratic Union (HDZ) can count on 68 seats in parliament, while the Social Democratic Party-led Restart Coalition can count on 43, according to State Electoral Commission results after votes from 63.55% of polling stations have been counted.

The Homeland Movement has won 15 seats so far, Bridge eight, and the green-left coalition led by the We Can! platform six.

The coalition of the Party with a First and Last Name, Pametno and Fokus have won two seats and the Croatian People’s Party one.

These results comprise the ballots of 46.14% of eligible voters.

10:30 p.m. (Hina) – The atmosphere at the election headquarters of the green-left coalition led by the We Can! platform was jubilant on Sunday evening after preliminary results released by the Electoral Commission showed that they had won four seats in the next parliament.

Bojan Glavasevic, an independent candidate on the coalition’s list in Constituency 6, said that citizens who think progressively found a progressive political option in this green-left coalition, adding that they emerged as the third strongest political force in Constituency 1, which covers the northwestern part of Zagreb County and the central and western parts of the City of Zagreb.

“Our success didn’t come overnight, but is the result of hard work in the Zagreb City Assembly and years of the activism of the Zagreb Is Ours! platform,” Glavasevic told Hina.

Speaking of post-election cooperation with other parties, he said there was no way they would cooperate with right-of-centre parties.

He commented on the election result of the Croatian Democratic Union (HDZ), which according to preliminary results won 71 seats, and the Social Democratic Party (SDP), which captured 45 seats.

“The right wing’s success gives me the energy and strength to be part of resistance and a solution to the problem they present,” Glavasevic said.

Speaking of the leadership of his former party, the SDP, he said they should “look at themselves in the mirror and realise that they need change.”

10:03 p.m. (Hina) – After ballots were counted from 36.85% of the polling stations, the Croatian Democratic Union (HDZ) is likely to win 69 seats in the national parliament, the State Electoral Commission reported on its web site on Sunday evening.

The Restart coalition led by the Social Democratic Party (SDP) is set to win 43 seats.

The Bridge party can count on six seats.

9:50 p.m. (Hina) – The Croatian Democratic Union (HDZ) has won 71 seats in parliament in Sunday’s election, while the Social Democratic Party-led Restart Coalition has won 45, according to the State Electoral Commission’s first results.

The Homeland Movement has won 16 seats, while the Bridge party and the green-left coalition, led by the We Can! platform, have won four each.

The coalition led by the Pametno party, Reformists, and the Croatian People’s Party have each won one seat.

The first results were released after ballots of 13.31% of voters, which is from 22.95% of polling stations, had been processed. 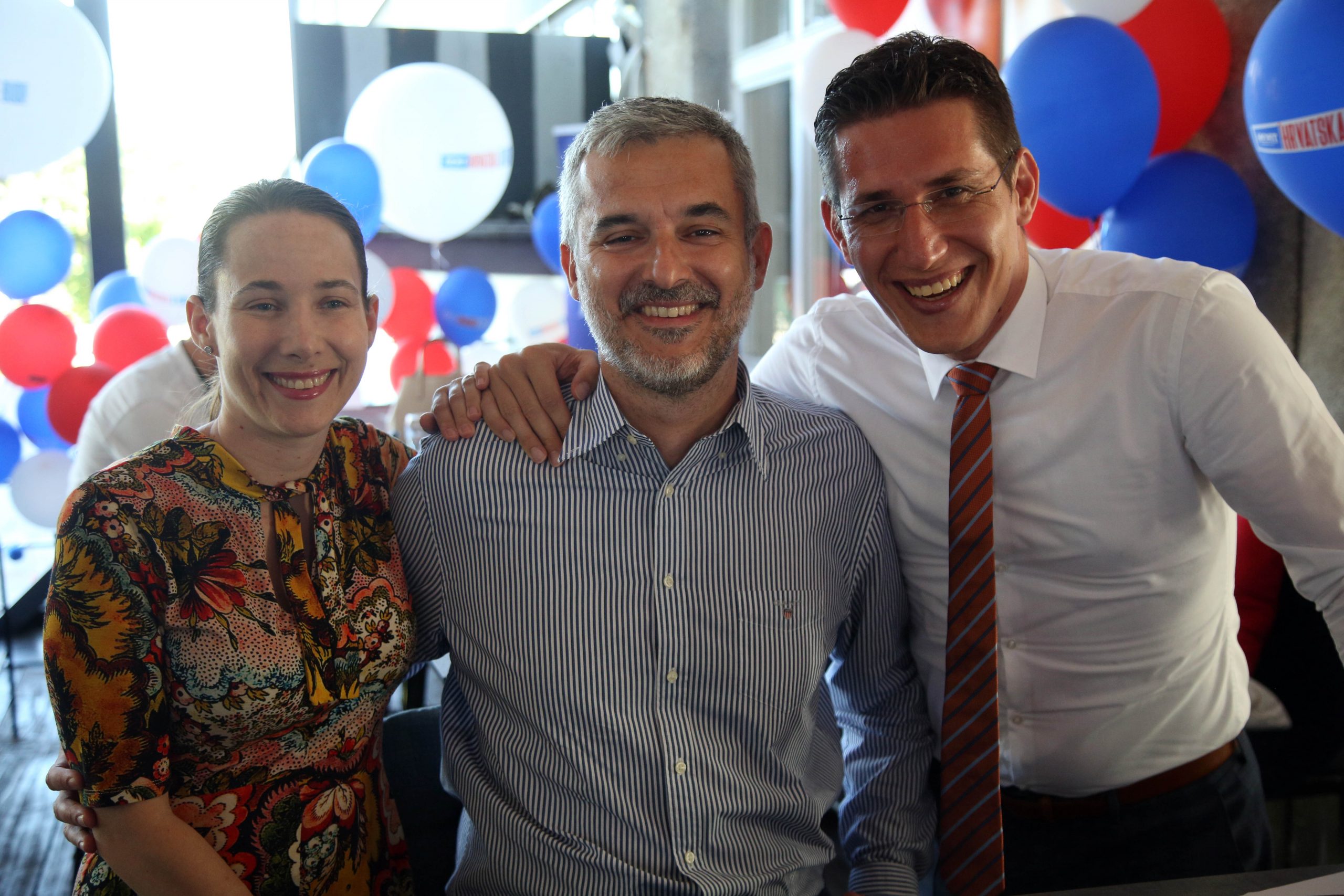 8:15 p.m – (Hina) – The leader of the Pametno (Smart) party, Marijana Puljak, who in a coalition with the Party with a First and Last Name and the Fokus party won three seats in parliament according to an exit poll, on Sunday expressed her satisfaction with the result and hope that the official result would confirm these seats.

She recalled that their coalition brings together centrist parties whose messages reached voters during the brief campaign. “The campaign was very brief and intensive and extraordinary compared to previous elections. I would like to thank voters who went to the polls in these difficult circumstances and in particular, those who voted for our coalition, said Puljak.

“We managed to communicate our messages and I hope that will be reflected in the final result,” she said, adding that they would insist on all reforms they had spoken about in their campaign.

7:45 p.m – (Hina) –The latest exit polls show that the leading Croatian Democratic Union (HDZ) is set to win 62 seats in the national 151-seat legislature after Croatians on Sunday went to the polls to elect the new, 10th parliament.

The Restart coalition led by the Social Democratic Party (SDP) is set to win 43 seats.

The first exit polls, released immediately after the polling stations closed throughout the country, showed that the HDZ could count on 61 seats and the Restart coalition on 44.

The right-wing Homeland Movement of folk singer Miroslav Skoro is set to win 14 seats, while the initial exit polls predicted 16 seats for it.

The conservative Bridge party now can count on nine seats, one more than in the first exit polls.

The latest exit polls show that left-green coalition led by the We Can! party captured eight seats each.

The liberal-centrist coalition of the Party with a First and Last Name, Pametno and Fokus won three seats.

The latest exit polls show that the Croatian People’s Party (HNS), a junior partner in the current cabinet, seems to have won one seat in the national parliament. 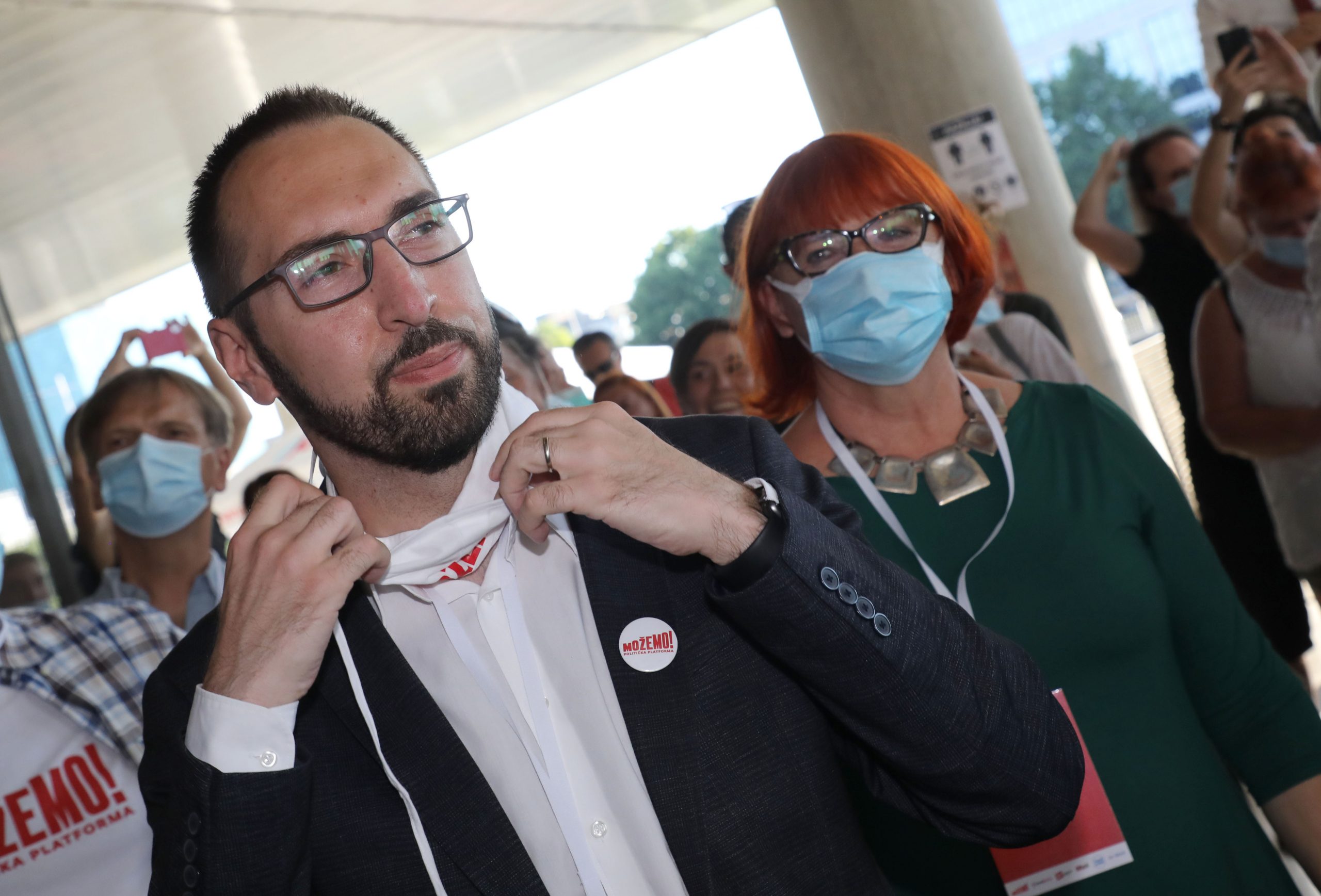 7:00 p.m. (Hina) – Polling stations throughout Croatia closed at 7 p.m on Sunday after Croatians cast their ballots for the 10th national legislature, and the first incomplete results are likely to be announced by the State Electoral Commission (DIP) about 9 p.m.

The voting for the new 151-seat legislature was held in demanding conditions due to the COVID-19 epidemic.

According to turnout data released by DIP on Sunday afternoon, 34.04% of eligible voters went to the polls by 4.30 p.m., which was lower than the corresponding turnout of 37.2% in the September 2016 parliamentary elections.

Out-of-country voting has been organised for expat communities in 42 countries. The last polling stations abroad which will be closed are in Canada, Chicago and Los Angeles due to different time zones.

In Bosnia and Herzegovina, the turnout seems to be higher than in 2016. By 4.30 p.m. four thousand more voters turned out at polling stations in that country in comparison to 2016.