Home » Sport » Croatia Jump to No. 3 in World in Davis Cup Tennis Rankings

Croatia are now the 3rd ranked nation in the world in the latest Davis Cup rankings released on 28 November 2016.

Croatia has climed from 5th to 3rd in the ITF Davis Cup Nations Rankings after finishing runners-up in the 2016 Davis Cup final in Zagreb on the weekend.

Argentina, who beat Croatia 3-2 on Sunday to claim their first ever Davis Cup title, have replaced Great Britain as the No. 1 team in the world. Argentina went into the final in second place. 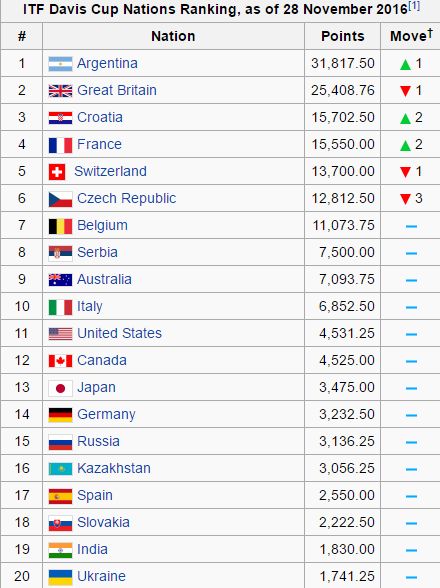 Even if Croatia did manage to pull off victory against Argentina they still would not have claimed the top spot.

In Davis Cup ranking points are only won for victories with results over the last 4 years calculated in the rankings. Croatia will face Spain first up in the Davis Cup 2017 in early February.