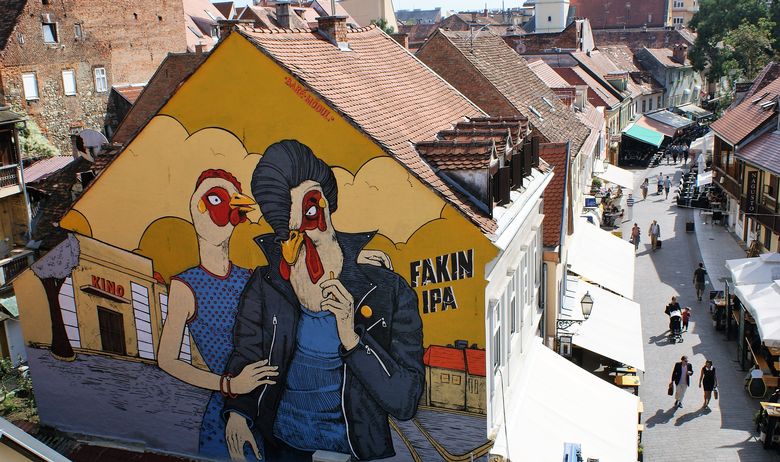 It all started seven years ago with the project Museum of Street Art (MUU) which turned Branimirova street in Zagreb into an open gallery. Many artists left their art trace

Many artists left their art trace along the walls and turned it into a vivid sight. After that event, the project went to the neighbourhood of New Zagreb with the idea of decentralizing street art. Building walls were painted which changed the whole atmosphere of the city.

After that, they turned old military hospital in Vlaška street into an open art gallery for a day where, again, lots of different artists did wall murals.

Today, MUU is keeping quiet since its organizers are working on some new projects but the energy from that time has started a new chapter for the city of Zagreb.

In the last couple of years, some seriously good street artworks emerged in Zagreb. Lots of hidden corners got their new visuals and projects like Art Park, Rendez-vous festival and Nuit Blanche, all supported by the Zagreb Tourist Board, welcomed this way of artistic expression in the city center. This is the reason why Zagreb has become a serious player on the world street art city stage.

If you feel like checking street art locations in Zagreb, you can take a nice stroll through the center and enjoy the sights. Here are some really cool spots in Zagreb worth visiting. The background for a nice shot is guaranteed! 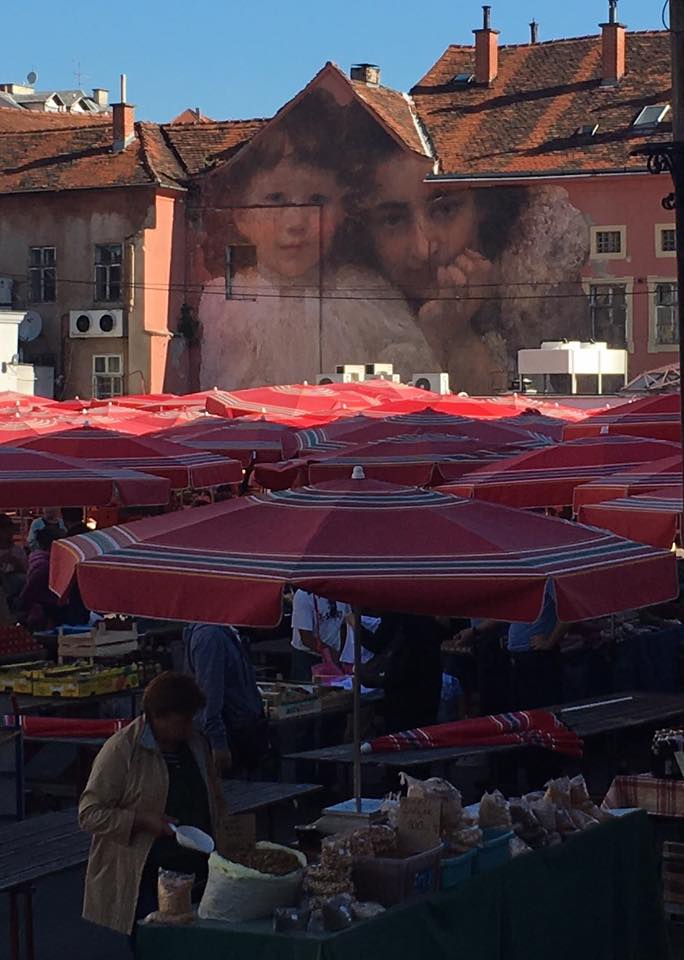 It all starts in the center, this time at the famous food market Dolac where this amazing photo mural was made by French artist Julien de Casabianca. He visited Zagreb in June 2017. as a part of his word renowned project Outings. The idea behind this project is to take paintings of famous artists into the streets so everyone can see art that is usually kept in the museums and galleries.

Following that idea, this painting was done by famous Croatian artist Vlaho Bukovac. To every visitor of the market, it gives a beautiful romantic sight. 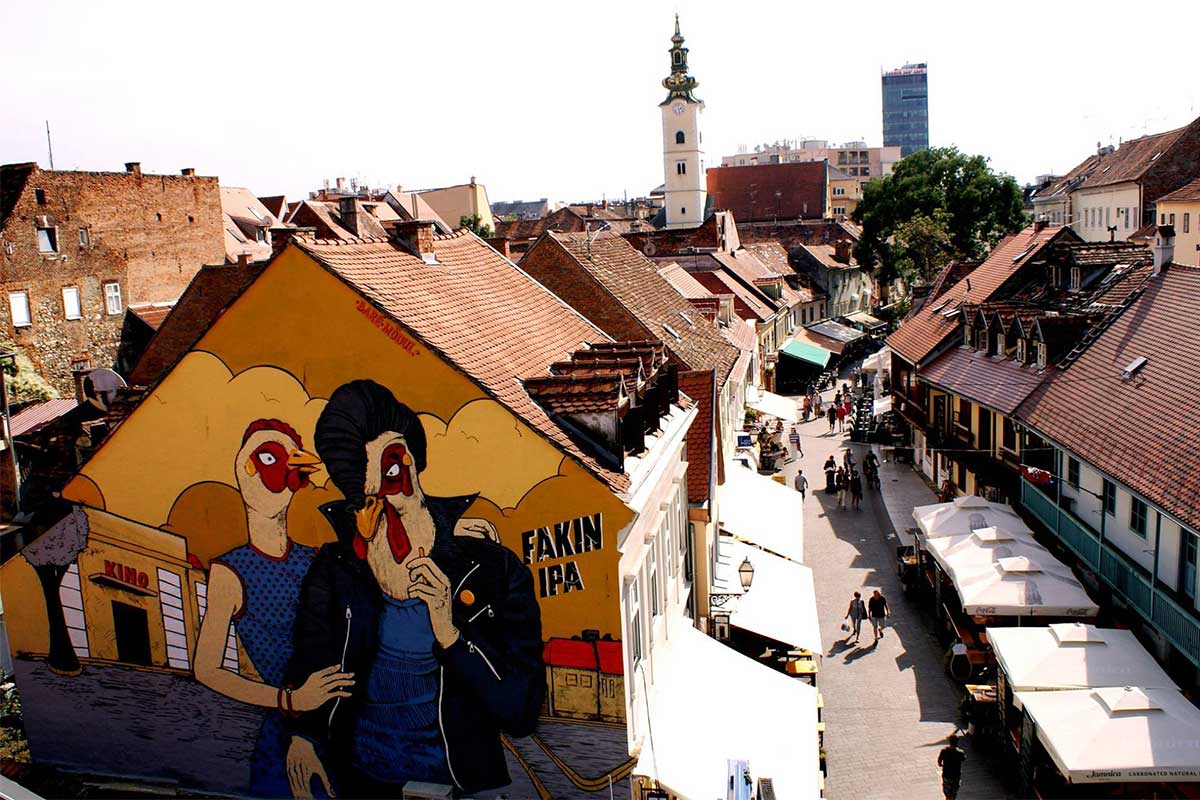 The most charming street in Zagreb has one of the recognizable murals in the city. One side of the building was turned into a vivid mural by two Croatian artist Bare and Modul. It was done for the purposes of the Medvedgrad brewery. 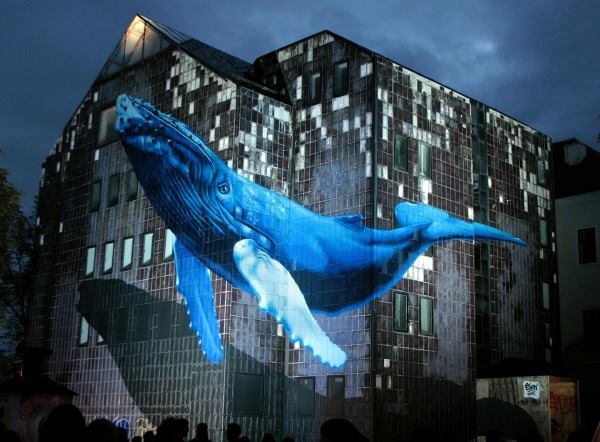 Continuing your walk towards Upper City you will hit Gradec. This spacious terrace has a nice city panorama and if you look behind your back you will see a giant whale. This mural called Anamorphosis, on the old and unfortunately unused building, was made by a French artist Etien as a part of the Rendez-vous festival in 2015. Eventually, it was included in the list as one the nicest murals in the world. Worth checking out in person. 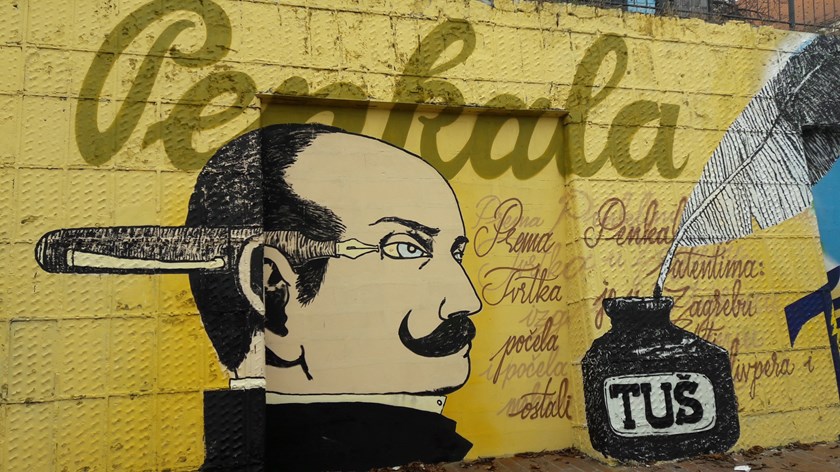 Just steps away from the whale, you will have a short glimpse of the Croatian history. Two Croatian artists, Bare and Dominik Vuković made Nikola Tesla and Slavoljub Penkala as one of the most important inventors in the history of Croatia. The whole block is covered with paint and history meaning. 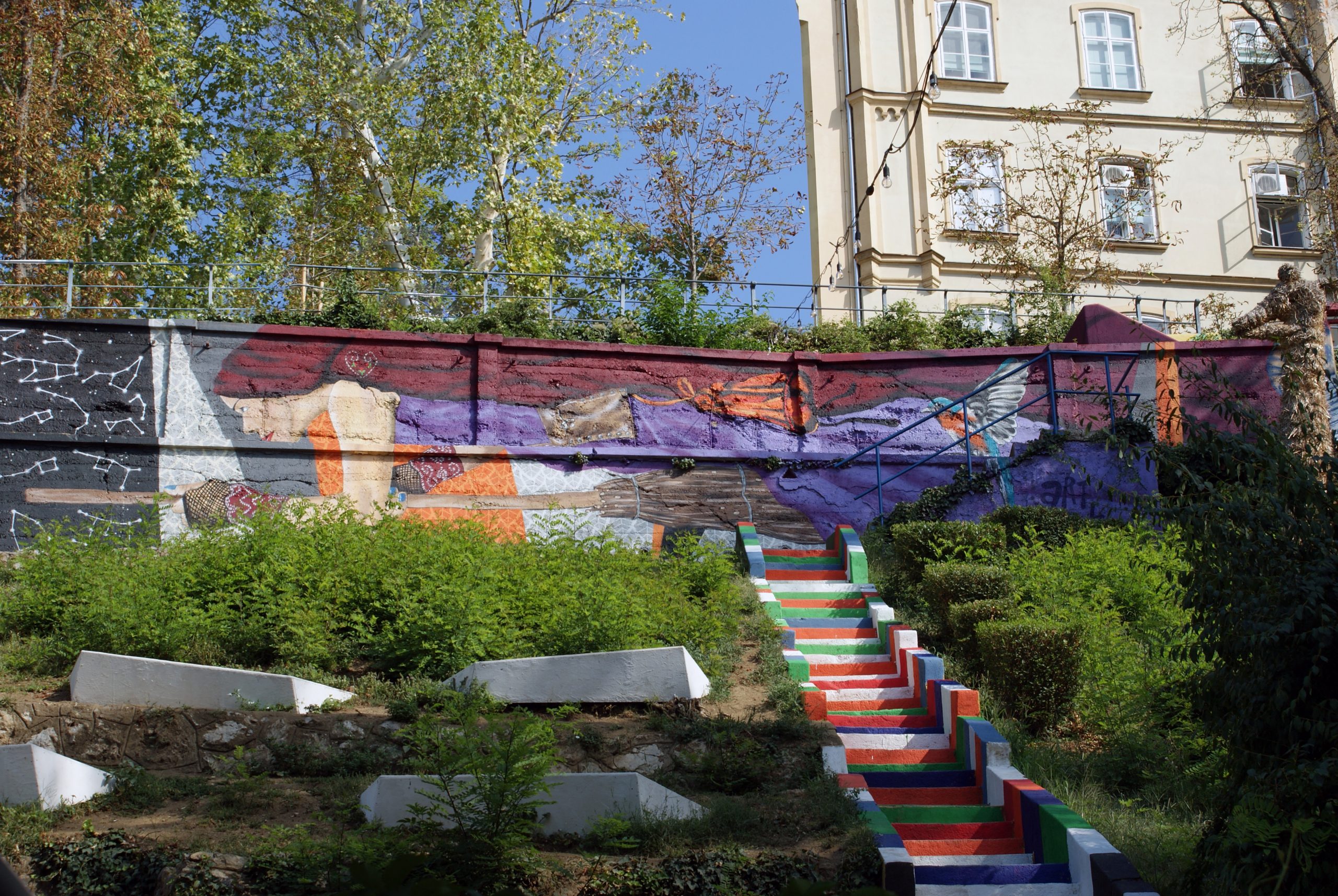 A project that turned a beautiful old park into an open gallery left some really nice street art sights. It ended in September but the artworks are still there for you to explore. On the upper side there is huge mural along the wall and at the tunnel entrance, two blackbirds will keep you surprised. 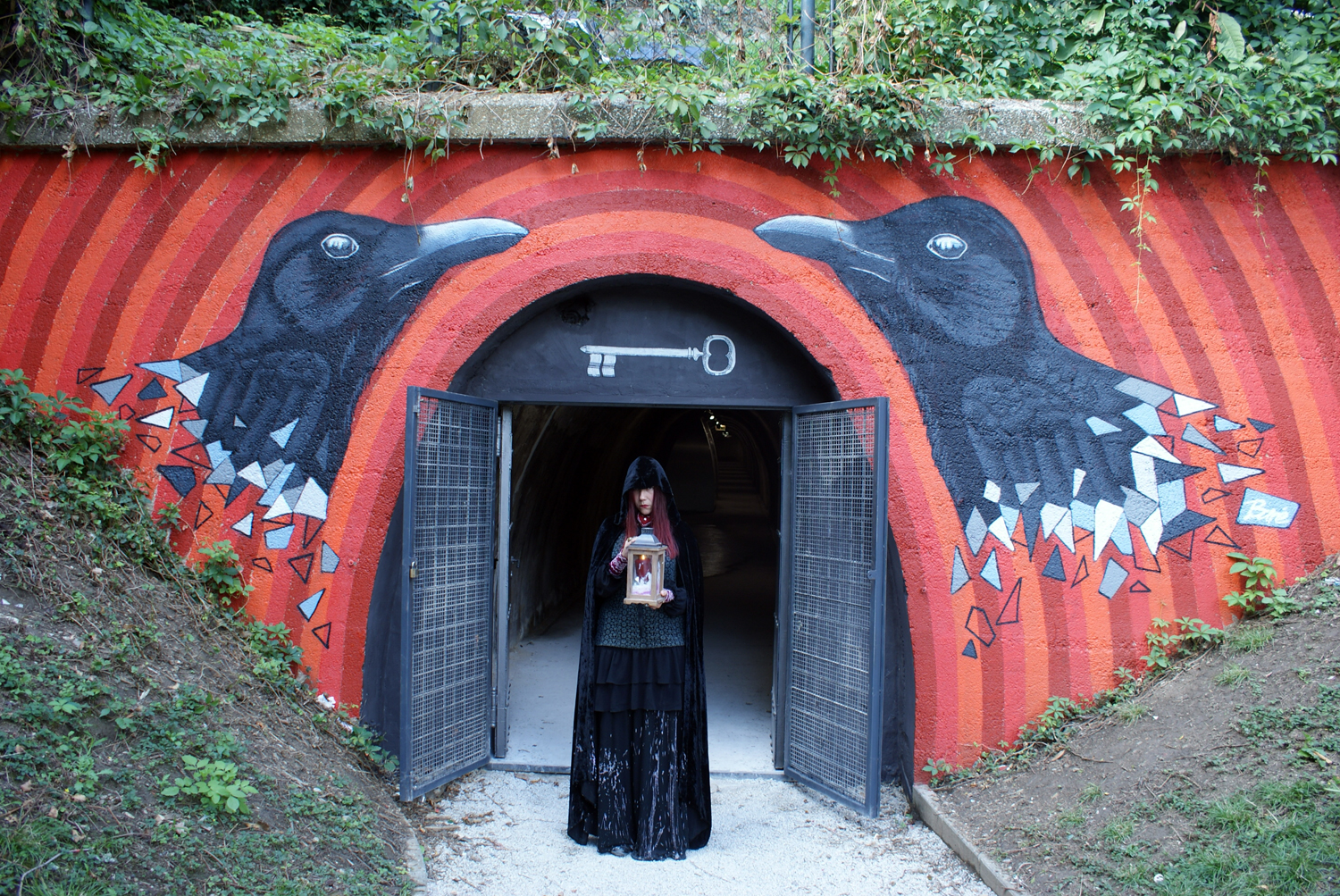 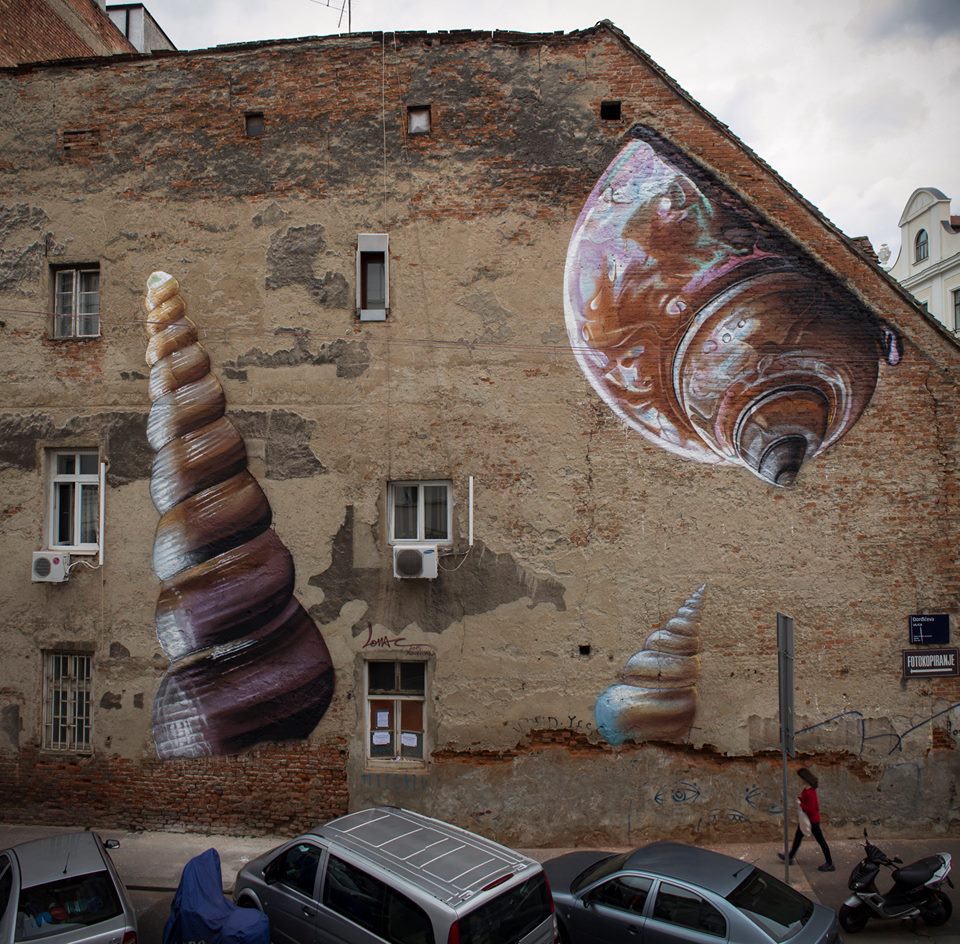 If you’ve checked the Upper Town its time to take a walk through downtown. First stop is the corner of Petrinjska and Đorđićeva street. Big romantic shell is a quiet keeper of this corner and its done by one the most talented Croatian artist that goes under name Lonac. It was also part of the Rendez-vous festival in 2015.

One more location in downtown can surprise you by its hidden street art gem. If you enter through Ilica 49, pas the Medvedgrad brewery terrace and you will hit a beautiful hidden park in the middle of the center. Some of the walls are worth checking out and if it’s a sunny day you can spend some time here in the park, away from the traffic. 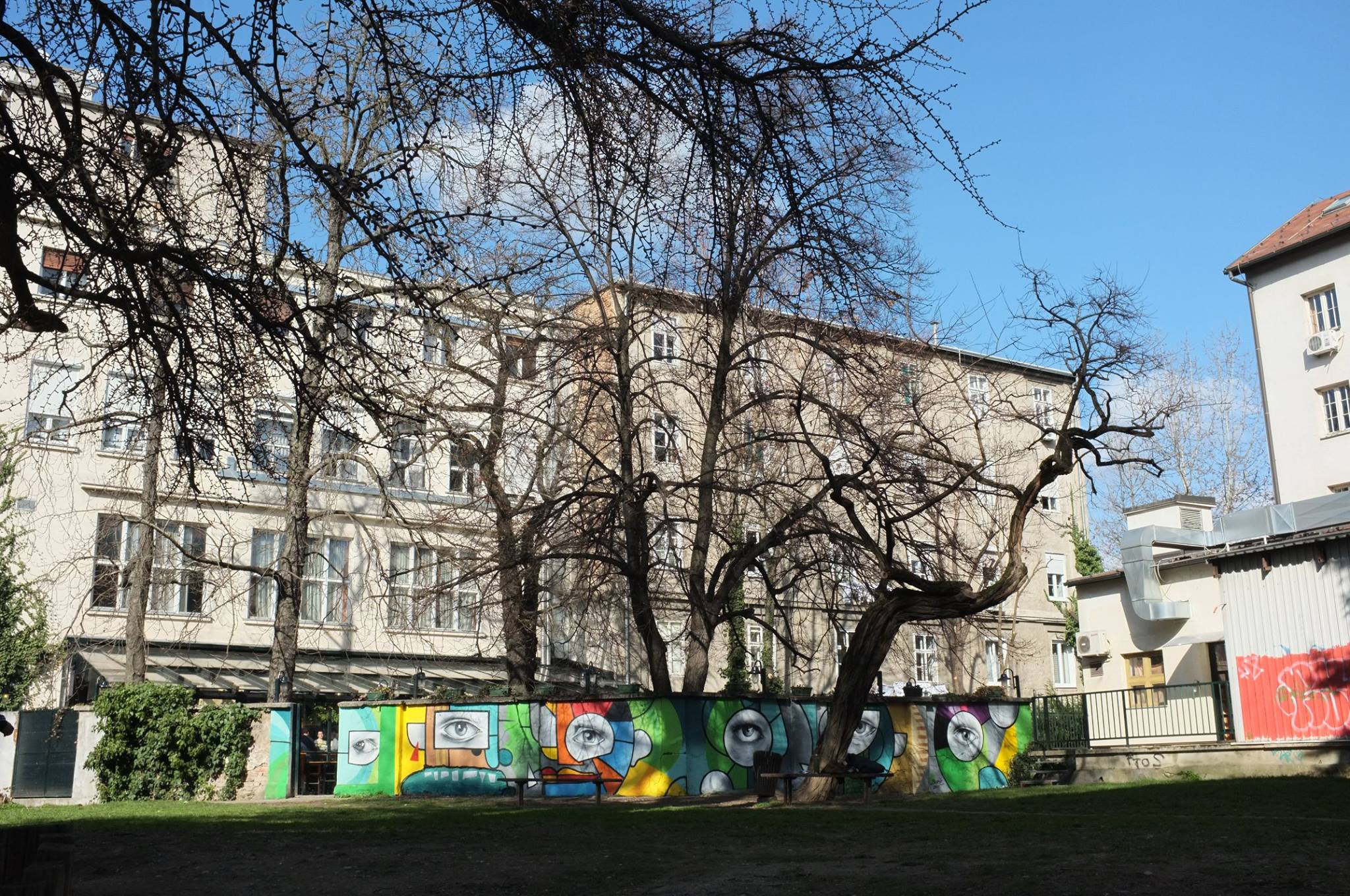 Just short ride by tram and you will find yourself in this artistic hub. Named as a student center this interesting complex will give you a lot of reasons to spend some time here. Beautiful French pavilion is in the middle of the complex as well as art gallery MM and &TD contemporary theater. Among this three points, you can walk around and find a lot of interesting walls.

Well-known domestic artist such as Lonac, OKO, Modul, Lunar and many more left their trace here, either it was an art festival or their free inspiration. It can really be a nice walk and an observatory point for the latest trends in the world of Croatian art scene. 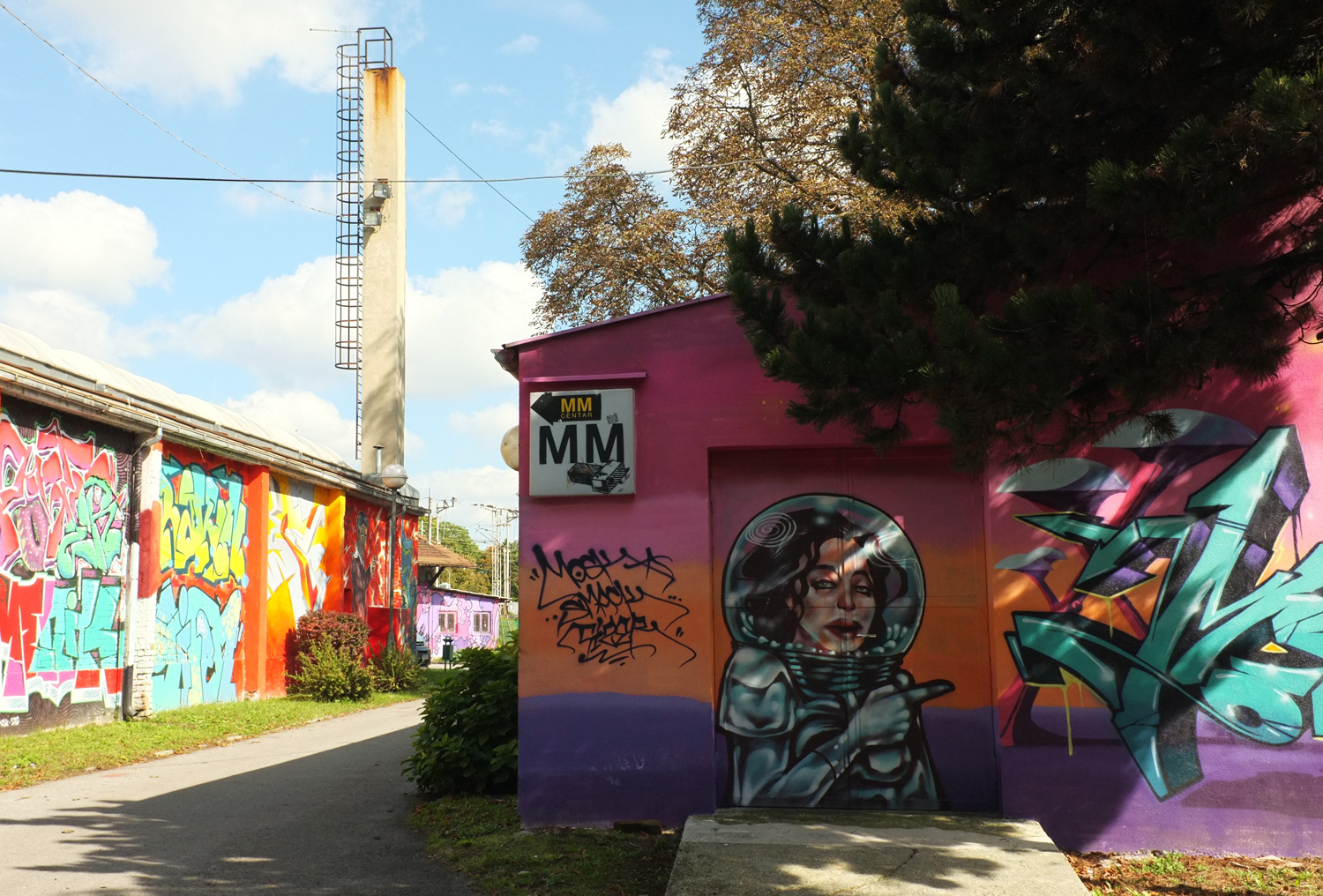 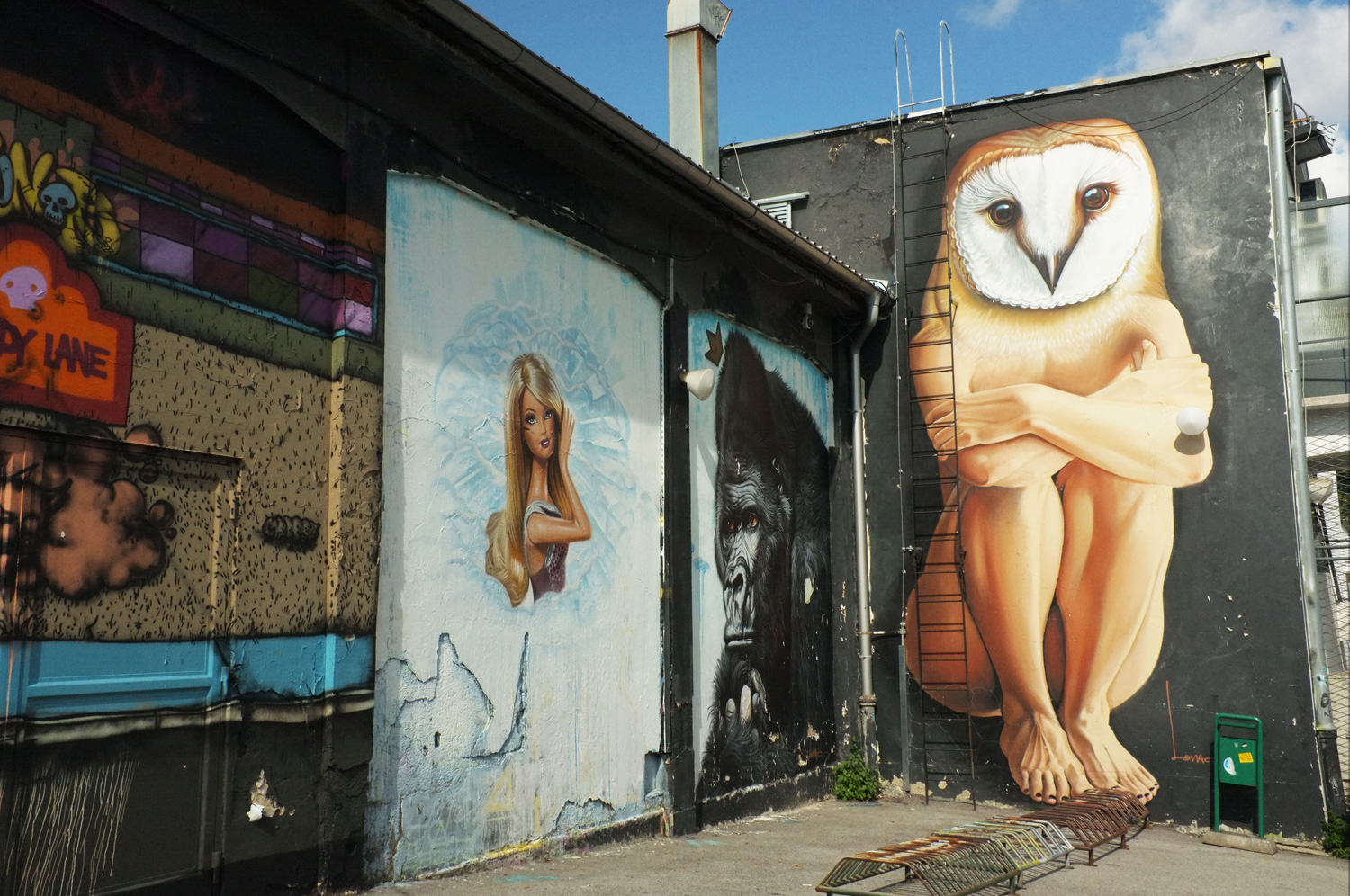 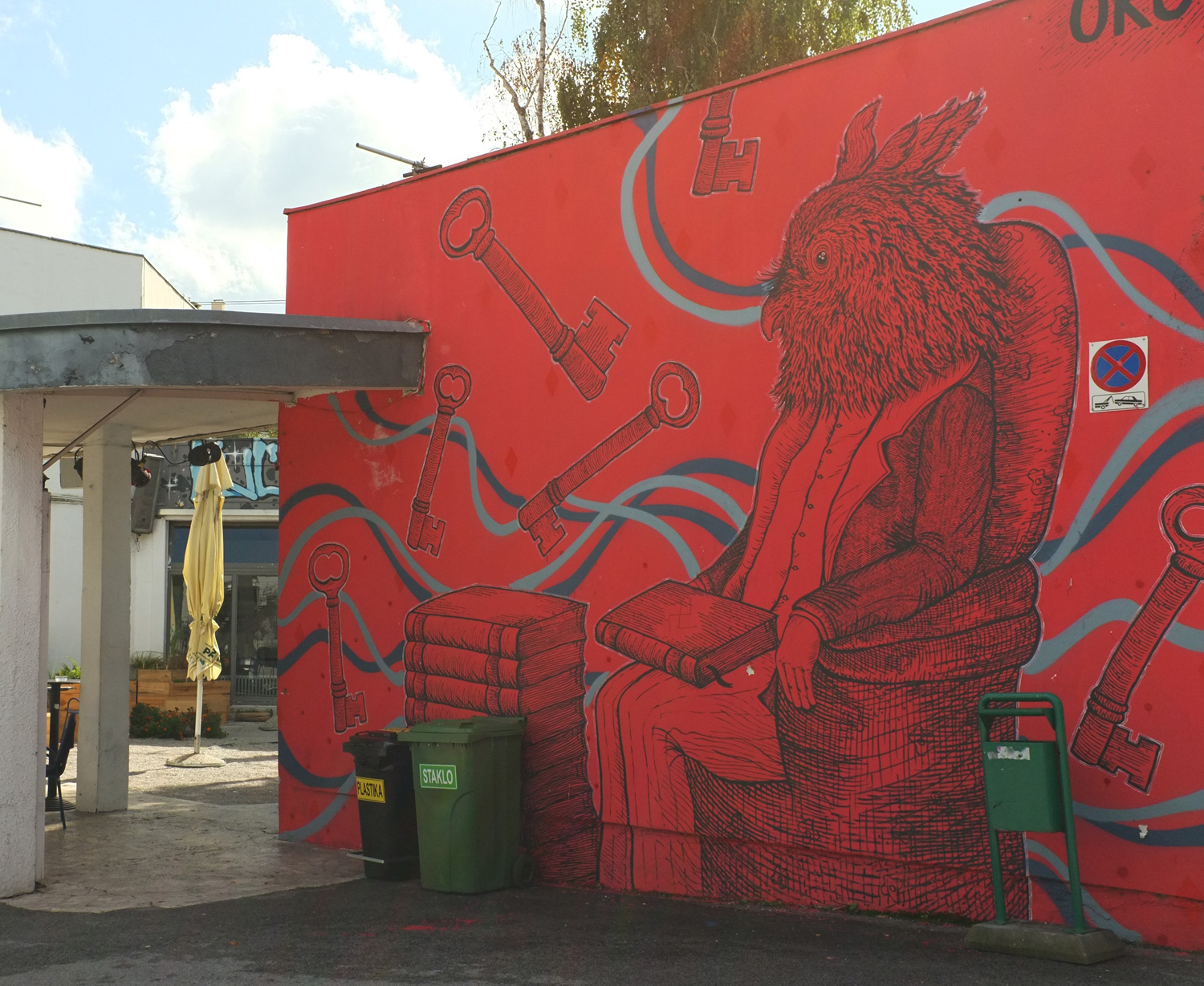 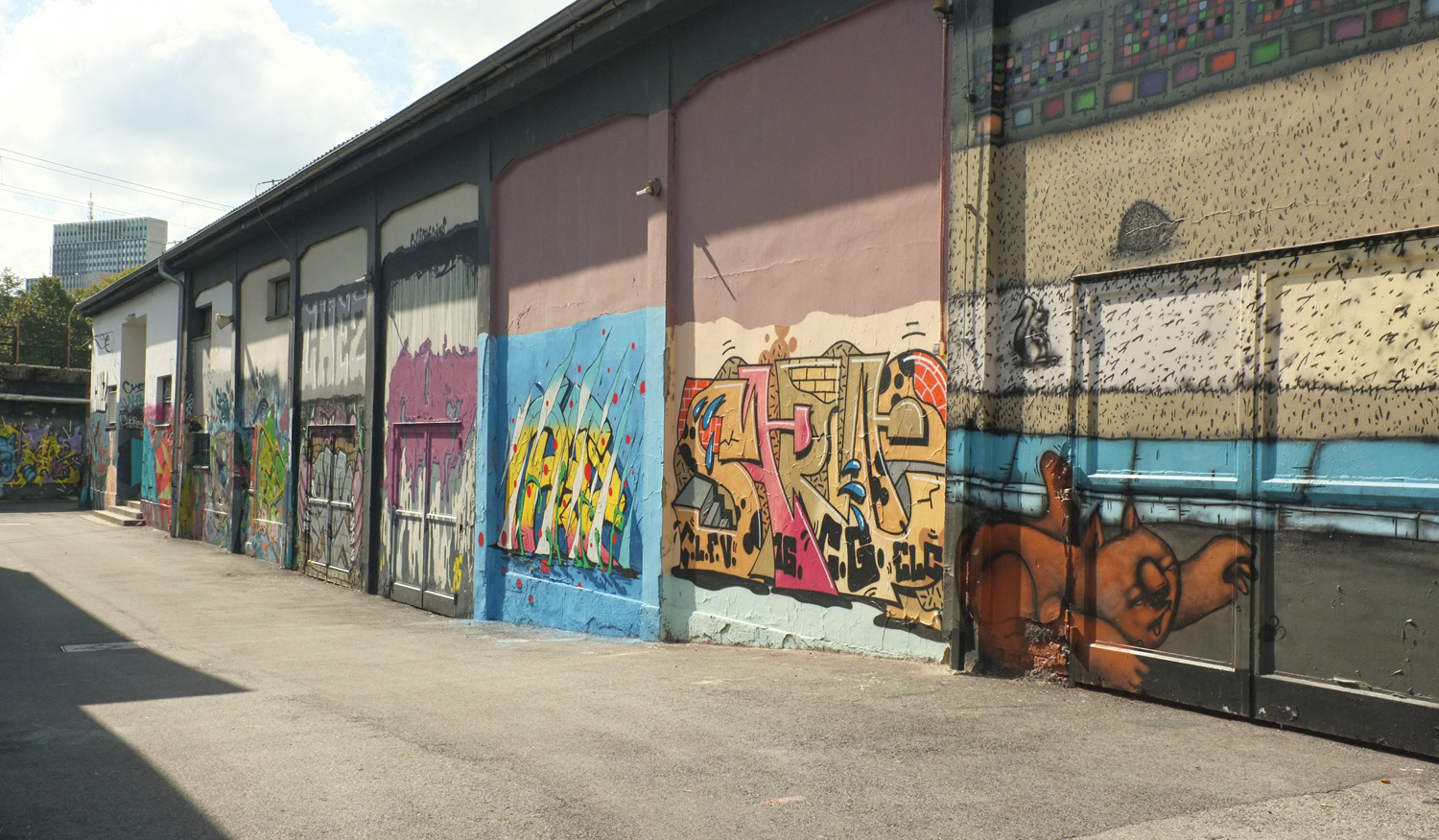 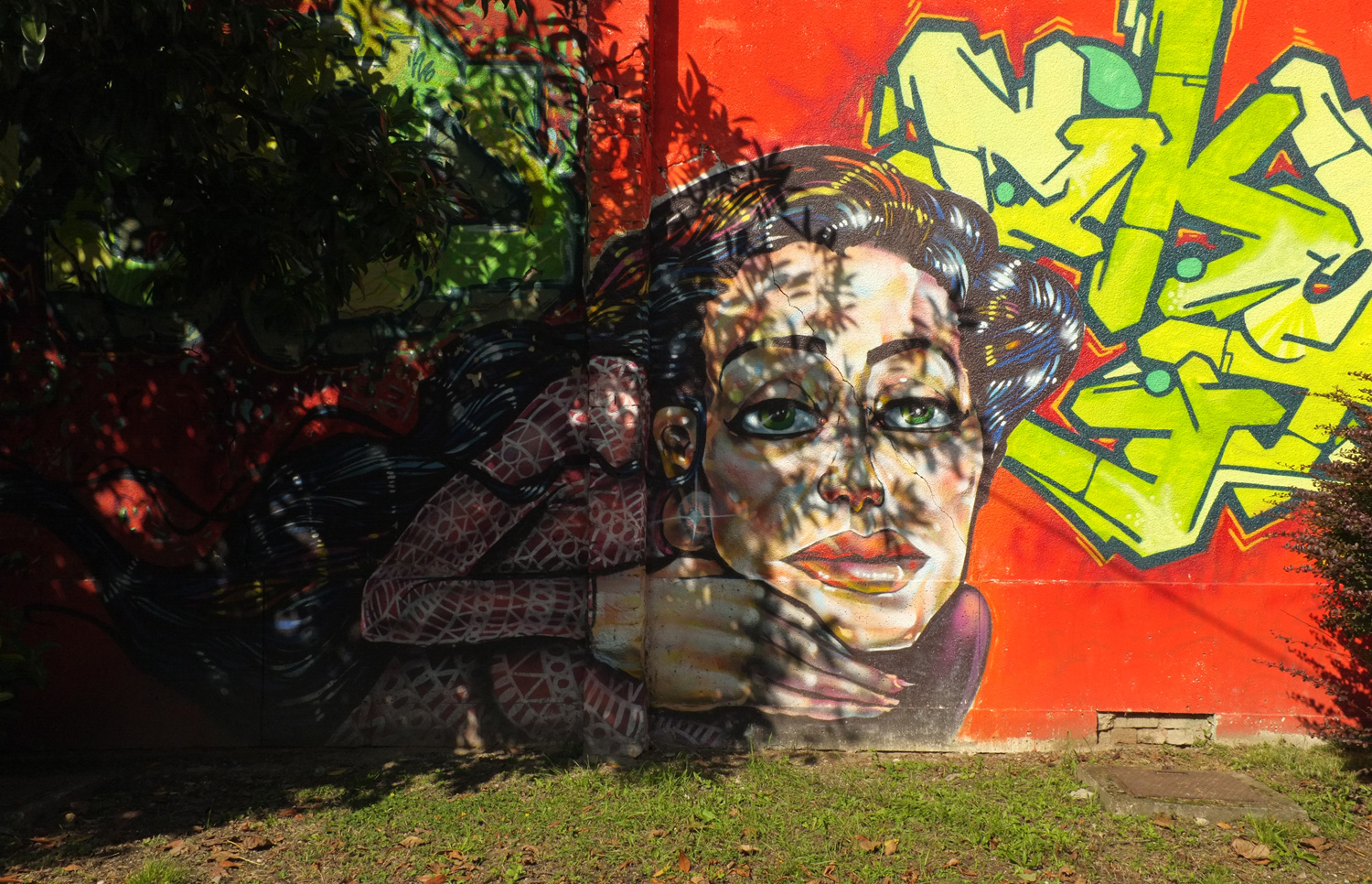 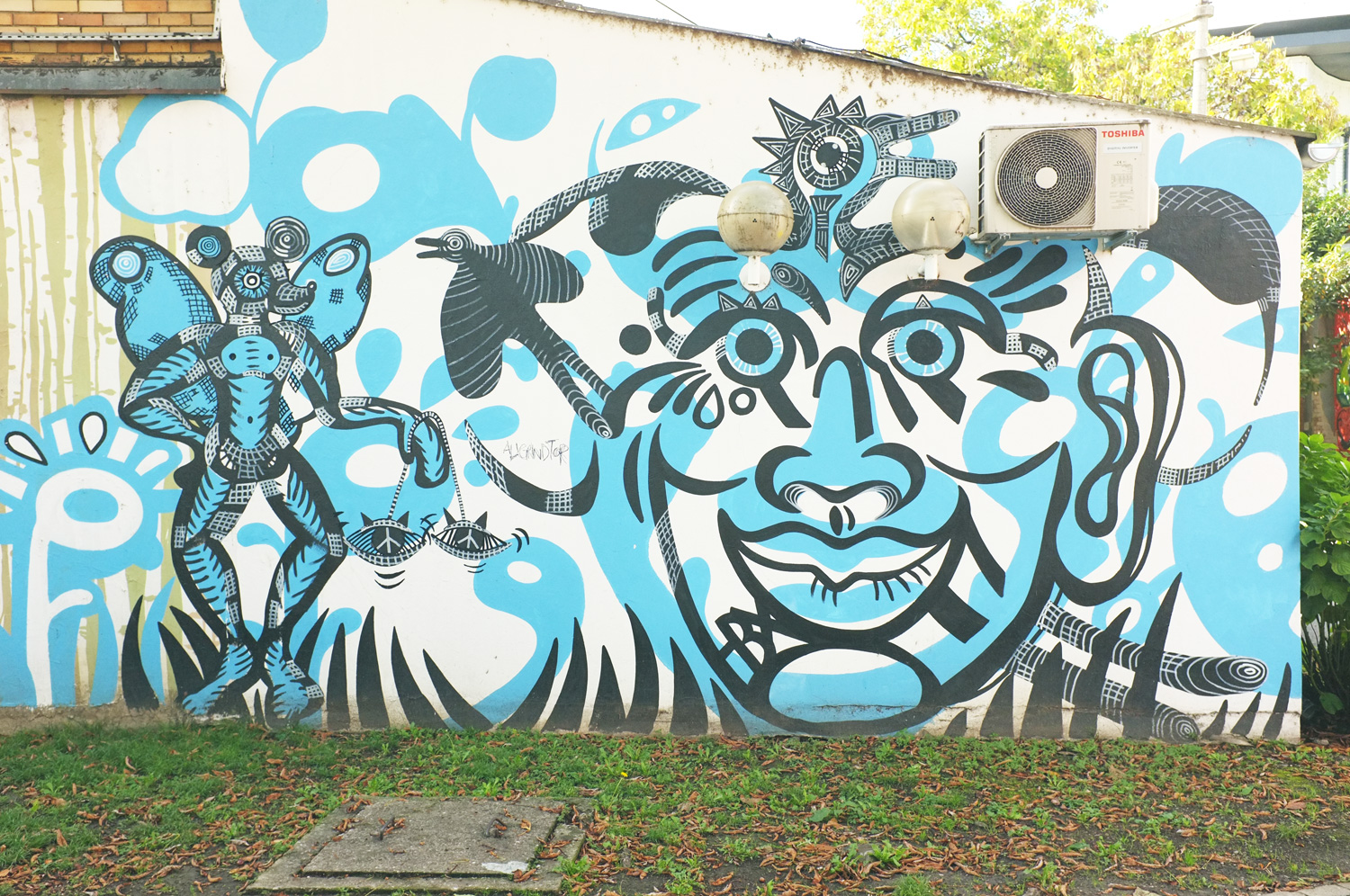 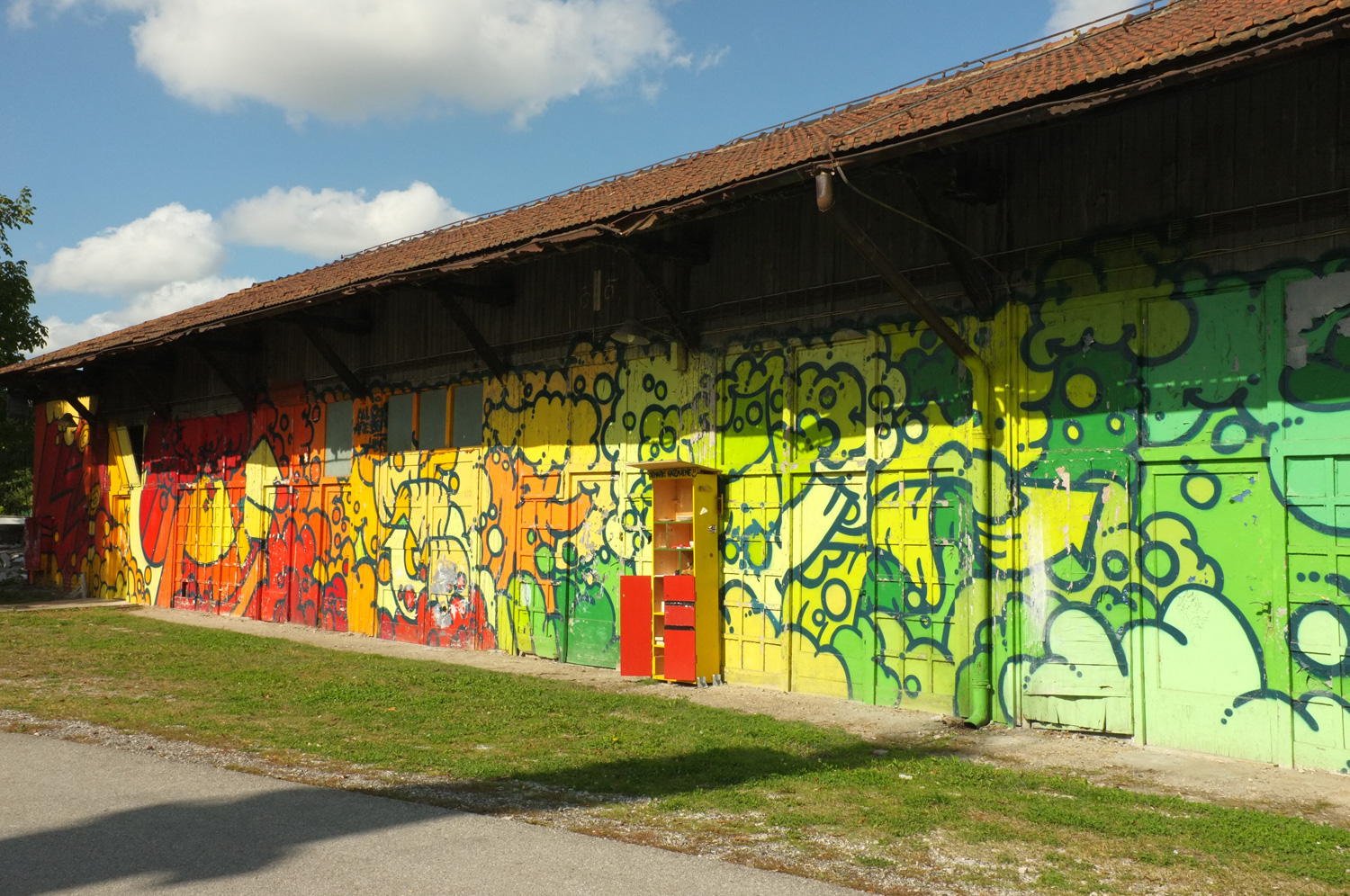 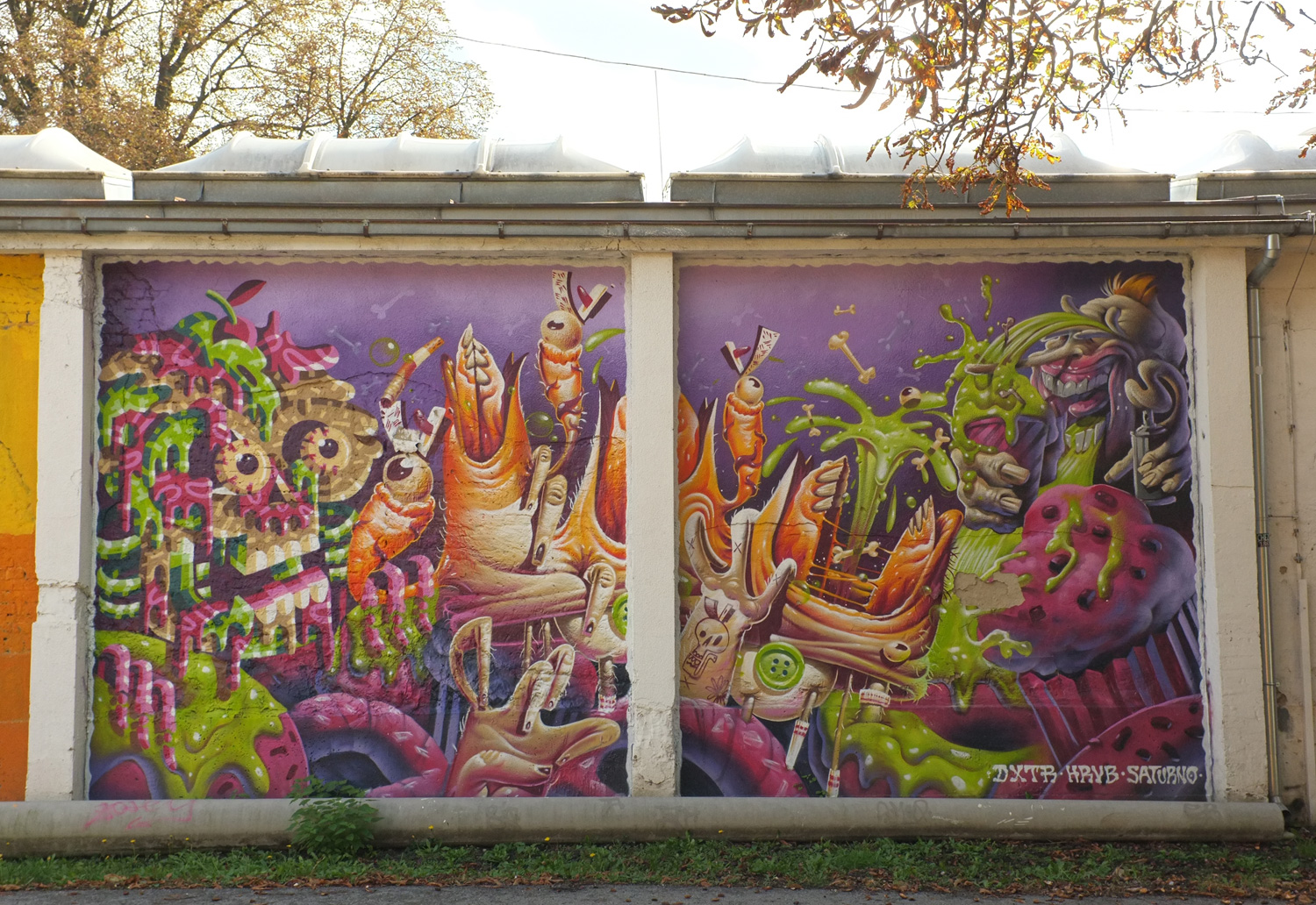 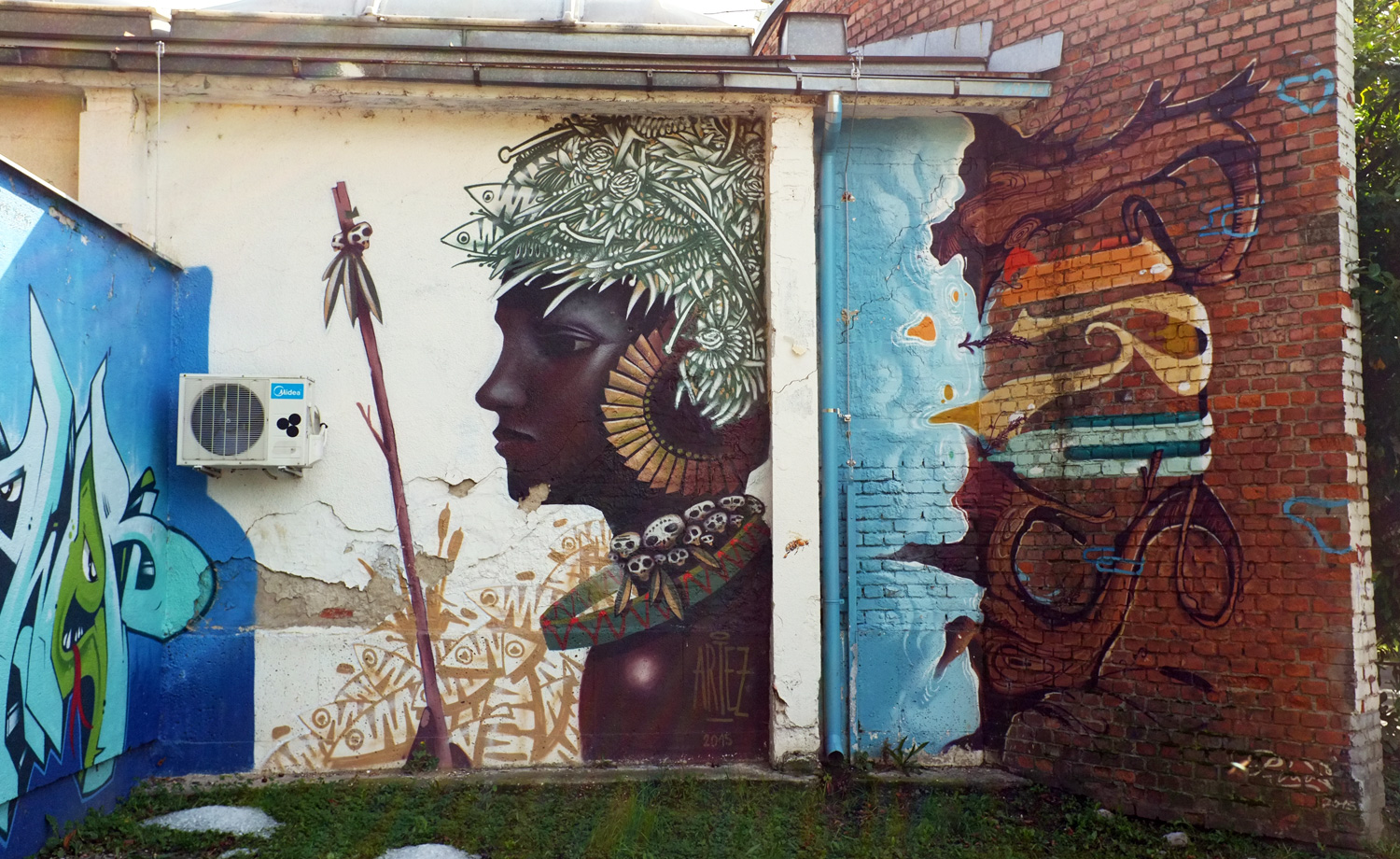 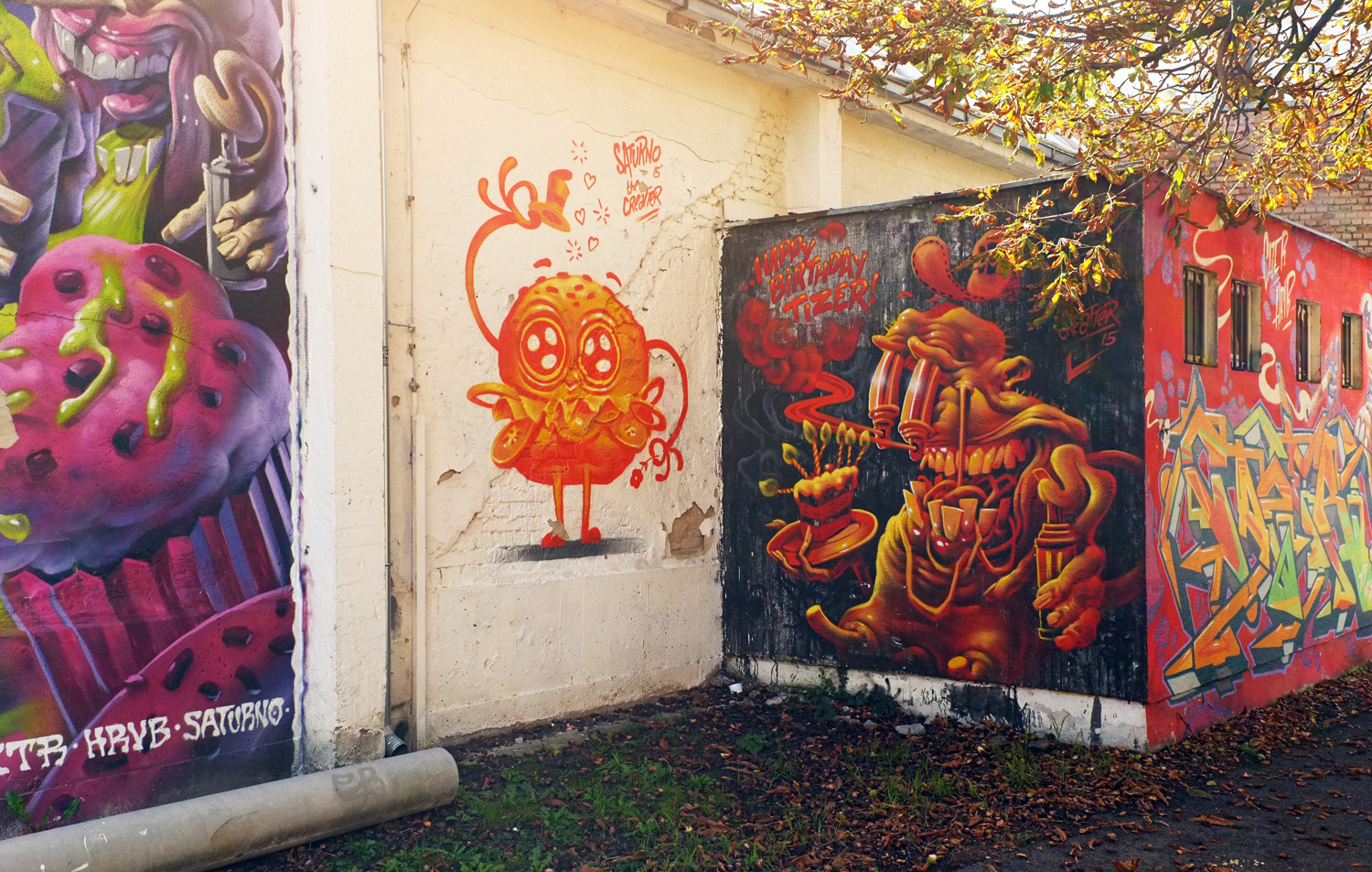