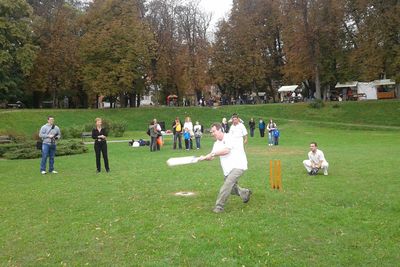 The small city of Karlovac, located some 50-odd kilometers south-west of the Croatian capital Zagreb, was a buzz on Saturday as over 70 associations and organisations gathered in the city centre for the 4th edition of the “Sajam Udruga” (Association Fair).

The fair’s aim is to promote civil society and to encourage citizens of all ages to participate and get involved in Non Governmental Organisations. Besides numerous stands promoting various organisations from the field of music, arts, dance and sport, there were also interactive events and workshops on the day such as the graffiti workshop “Active Citizens” which was organised in conjunction with the British Council.

The British ambassador to Croatia Mr David Slinn (pictured) was also a special guest on the day and he even found time to play a bit of cricket with the Deputy Mayor of Karlovac Mrs Marina Kolakovic, showing his batting and bowling skills as he made his way around the stands.

The fair closes with a concert from local Zagreb rock band Porto Morto and jam sessions from young Zagreb and Karlovac musicians.