Home » Entertainment » An art swap on the cliffs of Brseč 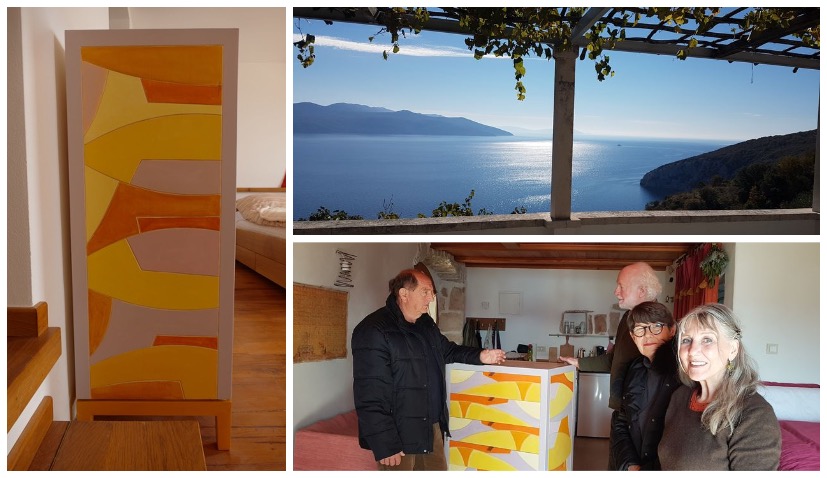 An art swap on the cliffs of Brseč

An idea is born: Croatia’s most important contemporary sculptor Ljubo de Karina and the Munich artist Esteban Kleist decide to exhibit in each other’s homes

Corona has affected the livelihood of many an artist in Germany, and Esteban Kleist was looking for new ways to market his work. The sculptor, painter and furniture designer from Munich was on a holiday in Croatia last October when a clever plan unfolded. After a visit to the famous Croatian sculptor Ljubo de Karina, the two decided to do an art swop.

Kleist had never met de Karina before but they hit it off. Why wouldn’t they? Both share a love of beauty, and both live in and are inspired by nature. De Karina’s stunning stone house on the cliffs of Brseč has a breathtaking view over the Adriatic and island of Cres.

The Croat says he didn’t need to go to art school (although he did) because the beauty of the area, and especially, the limestone cliffs, taught him all he needed to know about form and beauty, drama and contrast.

Ljubo de Karina’s house is filled with art from all his phases, including this early piece

Kleist lives in Oberpfaffenhofen south of Munich, a sleepy village in the “Fünfseenland” (land of five lakes) at the foot of the Bavarian Alps. Surrounded by meadows and forests, it is a two-minute bicycle ride to the idyllic Weßling Lake. But Kleist’s artistic inspiration also comes from a childhood in Buenos Aires with its “verdant vegetation, colours, the sun, the Atlantic, and joy of life,” as he puts it. While he studied fine art, a growing love of wood led him to learn carpentry. His work is now very much a combination of colour and wood. His latest venture is creating bright designs on furniture.

A wooden sculpture by Esteban Kleist

After a tour around de Karina’s house – and sitting in comfortable leather sofas where they exchange views on art, the state of world health and their own health – the artists decide they will exhibit in each other’s homes. “It’s always revitalising to have your art seen by new people,” says de Karina, whose sculptures are found in Germany, Italy, Japan and Slovenia, with works also in significant international art collections.

The homes of both artists form a kind of gallery. Kleist’s roomy house, a charming old villa that once belonged to the village vicar, has one floor dedicated to exhibitions. Kleist and his wife Almut often host private exhibitions that attract a circle of well heeled art lovers.

De Karina’s stone house, which stretches over three floors, is filled with artworks, and the olive groves have been turned into a sculpture garden. The house is rented out in the warmer months, and Kleist has already decided he will design a chest of drawers that can be both used and bought by guests. This will give him exposure to clients outside of Germany. It’s also the right target group, because those who choose to rent Karina’s home have discerning taste – and the budget to afford beautiful things.

For inspiration for his new project, Kleist goes out onto the terrace, drinking in the spectacular sea views, which are framed by vine-covered pergolas. He wants to capture the air and light in his work. Six months later, he returns to Brseč with the chest of drawers, ceremoniously unwrapping it with his wife Almut to show Ljubo and Mirna de Karina. Bursting in the colours of the sun – golden and lemon yellows – it makes its debut. De Karina says he is tempted to buy it himself but balks at the designer price. Mirna, who sometimes helps Karina sand his works, runs her fingers over the smooth edges approvingly.

Esteban Kleist (R) presents his work to Ljubo de Karina before it is moved to Brsec. Looking on are their wives, Mirna de Karina and Almut Kleist (R).

The next day, over more coffee and talk, it is decided to place the piece in one of the bedrooms, where it now harmonizes beautifully with golden wooden floors and a striking red artwork by de Karina.

Kleist now loads his van with a range of art from de Karina’s 40-year collection. “Ljubo’s works blow my mind,” he says. “It is so harmonious, so minimalist, almost spiritual. I can’t wait to have it in my home.” Then the two couples walk to the local Konoba to celebrate over wine and a large platter of fish. In their quiet ways, an understanding has flown between the two artists. Neither believes this venture will bring big business. But both are intrigued about where it will take them.